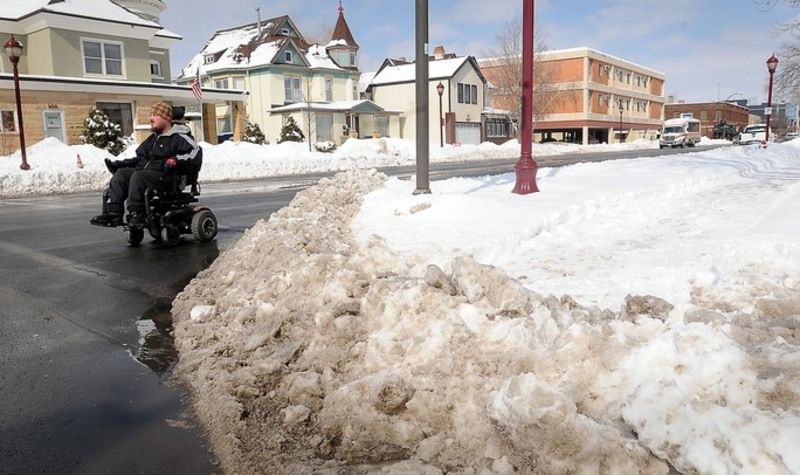 A snowy corner made it necessary Wednesday for Sam Stanke to travel on Second Street instead of a sidewalk. 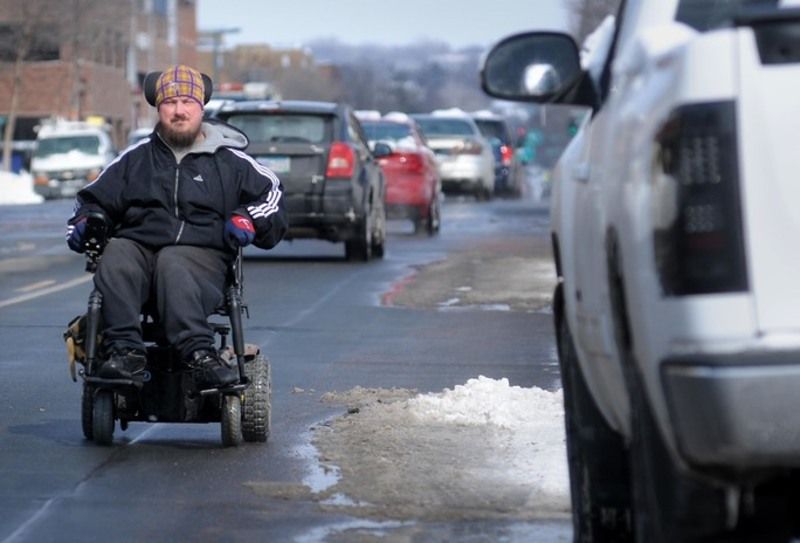 Sam Stanke of Mankato has to face Second Street traffic when sidewalks aren't an option.

A snowy corner made it necessary Wednesday for Sam Stanke to travel on Second Street instead of a sidewalk.

Sam Stanke of Mankato has to face Second Street traffic when sidewalks aren't an option.

MANKATO — Motorists once again faced snowy slush and watched for icy patches Wednesday as they drove down South Second Street after another snowfall. Around 1 p.m., some drivers began to lose their cool when they had to put up with an additional inconvenience: some guy in a wheelchair putzing along on the edge of a right lane.

"I hope they can be patient," said Sam Stanke of Mankato.

For those who can't, he suggested, "They should try walking a mile in my shoes."

If motorists are tired of dealing with a winter, imagine what wheelchair and mobility scooter uses have contended with during the last three months. Numerous sidewalks have remained clogged with snow and ice or blocked at access points.

Stanke, 34, has dealt with the challenges of cerebral palsy — which affects both legs and his left arm — throughout his life. In 1999, soon after his graduation from Mankato West High School, he began using a motorized wheelchair. He travels from Durham Apartments to his part-time job at Verizon Wireless Center several times a month.

His chair's top speed is 8 mph on a dry street. Stanke's been moving at about 5 mph this winter.

To avoid traffic and tons of snow on Wednesday, Stanke took a longer route through Mankato Place mall. There were points along Stanke's path, though, when he needed to enter a busy street because of snow-caked sidewalks and piled-up mounds blocking his way.

When Stanke tried to use an alley near Second Street on his way home, the wheelchair got hung up for the second time this winter.

"I was lucky, a lady stopped and helped me get unstuck."

Stanke carries a cellphone and he'll flag down someone to ask for assistance. On one particularly cold day, he had to call 911 for help to get the wheelchair moving.

"I'm sure people wonder why I use the streets," he said. "When there's snow on a corner, a shoveled sidewalk doesn't do me much good."

Stanke doesn't own a van and he's had problems using public transportation on very cold days. Experience has shown ramps on buses don't always work so well in the winter.

Stanke is an outdoors person who loves to go to events like RibFest in the summer. When the weather is snowy, it's hard for Stanke to stay indoors for days at a time.

"This winter's been really tough for everyone, but it's 10 times tougher for people in wheelchairs."

Mankato officials know this year's large amounts of snow have presented extra problems. The city issued a news release Wednesday recommending drivers reduce vehicle speeds and be watchful for people walking. The city urged residents and businesses to keep sidewalks shoveled so they may be used by pedestrians, which includes elderly and disabled people.

Mankato has a city ordinance that says any accumulation of snow or ice on a public sidewalk is a public nuisance. If it is not removed within 24 hours after a complaint, property owners can be charged for its removal.

On Friday in St. Paul, Minnesotans with disabilities will share their stories about the difficulty of navigating sidewalks, curb cuts, and transit stops that have not been cleared. The Minnesota State Council on Disability is sponsoring the press conference in the State Office Building.