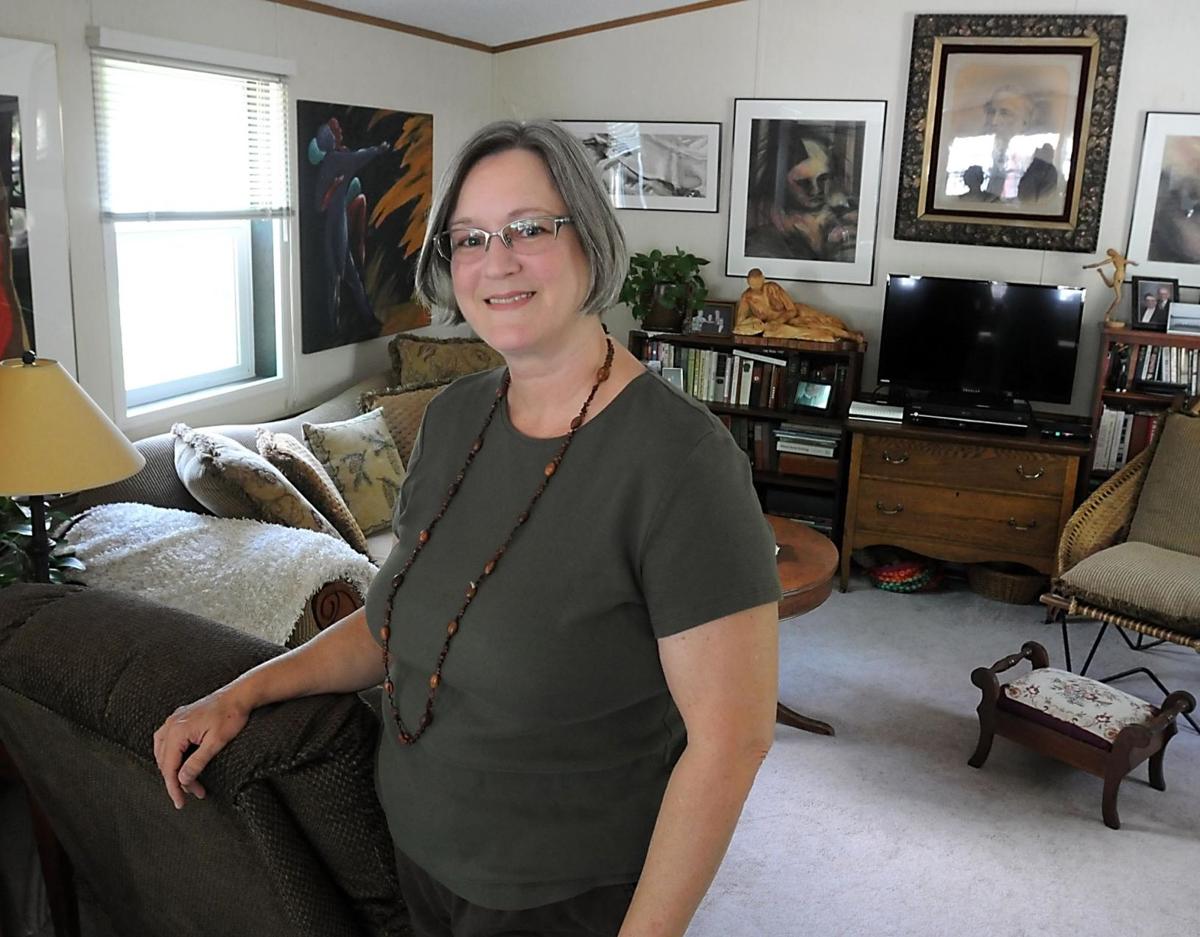 Laurie Evans bought a mobile home in Mankato after struggling to find decent, affordable housing. Even so, her lot rent is more than 30 percent of her income. Recent data show the Mankato area has the highest proportion in the state of so-called "cost-burdened" renters. Photo by Pat Christman 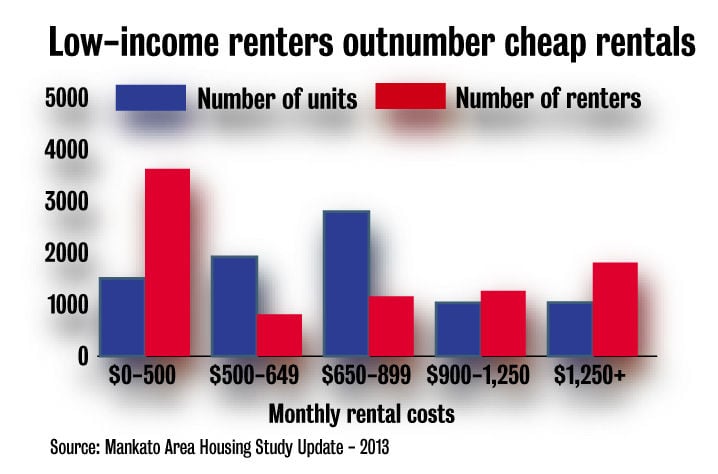 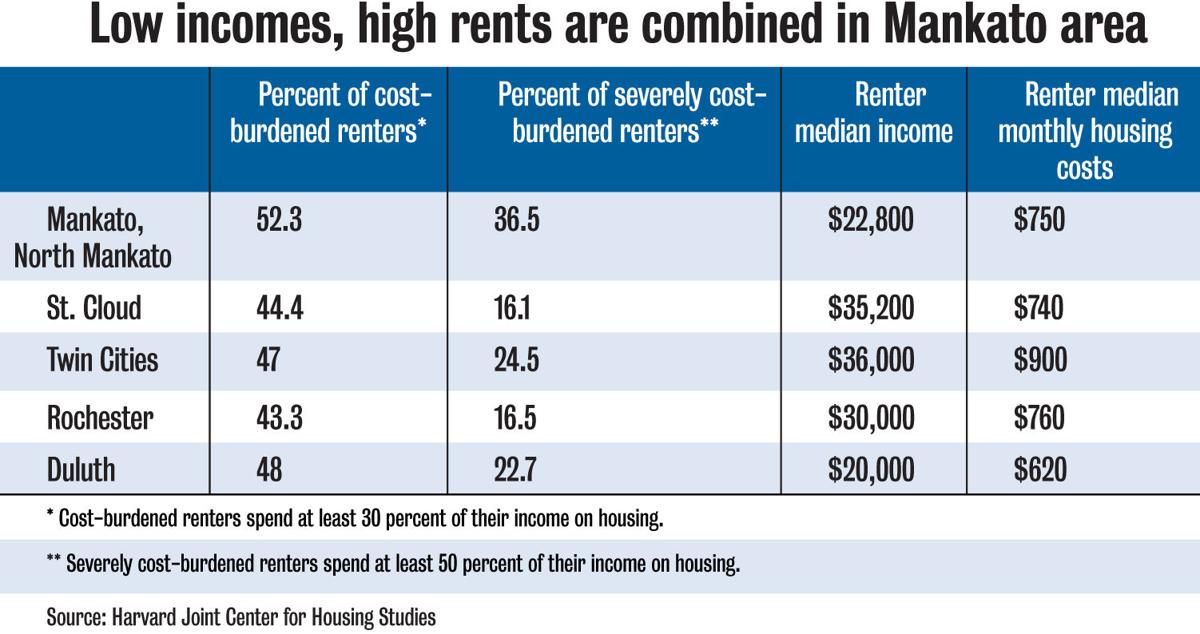 Laurie Evans bought a mobile home in Mankato after struggling to find decent, affordable housing. Even so, her lot rent is more than 30 percent of her income. Recent data show the Mankato area has the highest proportion in the state of so-called "cost-burdened" renters. Photo by Pat Christman

And wages are a big part of the problem, he said.

“I make $12 an hour as a cook and I can’t find a place to live in Mankato that isn’t half my income,” Kennedy said. “We just don’t have wage opportunity like they do in the Cities.”

“How are they supposed to work a minimum wage job, pay rent and put food on the table?” she said.

She recently had a choice between working in Mankato or transferring to an office in a Twin Cities suburb. She learned the rents she’d pay in Apple Valley were the same as in some newer Mankato complexes.

“There’s more opportunity up here than there is in Mankato, I think,” she said.

Laurie Evans of Mankato owns her own mobile home but said the rent she pays the mobile home park has risen by $65 a month in a little over a year.

Because she’s disabled and has difficulty finding work, her lot rent of $355 a month is more than 30 percent of her income.

Evans moved into her mobile home after the duplex she lived in was sold and the new owner raised the rent by a third.

“I found it really hard to find decent, affordable housing,” she said.

They’re called “cost-burdened” renters: People who spend at least 30 percent of their income on housing.

In the Mankato area, 52.3 percent of renters fit this definition. That’s the highest percentage in the state. And more than a third of renters, or 36.5 percent, spend more than half of their income on housing, also the highest figure statewide.

A scarcity of affordable rental properties and a low vacancy rate explain part of the problem.

According to a 2013 study of Mankato’s housing stock, 1,505 rental properties were available for $500 a month or less.

But there was a huge pool of households — an estimated 3,624 of them — that couldn’t pay more than $500 a month without becoming cost-burdened. The city plans to update that study this fall.

“Finding affordable housing in Mankato is a real challenge,” said Deb Newman, executive director of Partners for Affordable Housing. In the last year, they’ve had more than 425 households contact them in search of immediate assistance.

She said the minuscule vacancy rate (less than 1 percent for affordable one-bedroom apartments) is a factor, as are job changes such as layoffs or cuts in hours.

By itself, Mankato’s rental market can’t explain its preponderance of cost-burdened renters, according to 2013 data compiled and mapped by the Harvard Joint Center for Housing Studies.

St. Cloud’s share of renters who pay at least half of their income — called “severely” cost-burdened — is 16.1 percent, less than half of Mankato’s.

In only a handful of Minnesota cities — Fergus Falls, Alexandria, Duluth and Worthington — do renters earn less than they do in Mankato.

Unsurprisingly, there’s a strong correlation here between lower incomes and difficulty paying the rent. In Mankato, three-fourths of renters earning between $15,000 and $30,000 are cost-burdened. That percentage falls to 23 percent for people earning $30,000 to $45,000.

Mankato’s unusually low incomes also have something to do with its college population.

“That’s also going to have a big impact on why the rate of cost-burdened individuals are so high,” said Justin Eilers, a housing development manager for the nonprofit developer CommonBond Communities.

Evans also rejects the idea that struggles to pay the rent are caused by people who can’t figure out how to live within their means. She cuts coupons, shops at rummage sales, even cuts her own hair.

CommonBond recently reported it was seeking federal subsidies to build a 50-unit apartment complex in Mankato that would offer one-bedroom apartments at $561 a month and two-bedroom units at $750 a month.

But to afford the units without paying more than 30 percent of income on rent, a one-bedroom tenant would have to take home $1,870 a month. That’s just $30 a month less than the median income of renters in the Mankato area, according to the Harvard data.

In other words, just under half of renters couldn’t afford to live in a project that requires federal subsidies to offer rents this low. Without this assistance, the project would be impossible to finance, Eilers said.

“The reason it’s so difficult to keep rents lower is, No. 1, because of just increasing costs, really in all facets of real estate,” he said. That includes costs for land, utilities, property taxes and construction.

And incomes are not keeping up.

“We need to try to find a way to continue to create housing that people can afford,” Eilers said.

Mankato Community Development Director Paul Vogel said the city understands the need for affordable housing. He believes an influx of jobs may help to boost wages generally. Both the Wal-Mart distribution center and Fleet Farm are among new major employers in the city.

“It’ll be interesting to see what the next year brings as the employment market becomes a little more competitive,” he said.

Like some other college towns in Minnesota, Mankato limits the density of rental licenses in certain residential neighborhoods. The rule here is that no more than 25 percent of homeowners on a given block can get a rental license.

The rule is in place to prevent the rental conversion of neighborhoods, which can drive down property values.

The rule is not the biggest contributor to the affordable housing problem in Mankato, but it’s part of the picture, said Matthias Leyrer, a North Mankato blogger and advocate.

“Whenever you restrict the supply, you’re going to drive up the cost,” he said. “It kind of hampers the ability of existing housing stock to be used as a benefit” to affordable housing.

The effect of the rule is that new residential development is pushed to the edge of town instead of redeveloped land within the city, he said.

The Minnesota Supreme Court is considering a challenge to Winona’s similar rental restrictions. A ruling is expected by the end of August, said Anthony Sanders, an attorney at the Institute for Justice’s Minnesota office, which is helping home owners fight the rule.

“Its effect on Mankato is speculation at this point,” he said. But “we’re hopeful for a broad ruling that would secure the right to rent not just in Winona but elsewhere.”

Vogel, the city official, doesn’t agree the rental rule has much of an effect on rents here. He said other Minnesota cities have this rule but don’t have similarly high rates of cost-burdened renters. And he said Mankato’s rule applies only in select neighborhoods while it’s citywide in Winona.

Other city policies were also cited as being hard on renters.

Evans, the mobile home resident, is critical of a recent change in how the city bills mobile homes and apartments. In the past, an apartment complex would be charged the “base rate,” about $10 a month, just once. Now that rate is charged to each individual unit. (Part of the increase in her mobile home park's lot rent is attributable to the park’s annexation, which was accompanied by a connection to city utilities and higher rates.)

Deputy City Manager Tanya Ange said new laws required the city to change how it charges for drinking water. The city chose to use a uniform rate, which required them to treat each residence the same.

Kennedy said the city’s approval of new apartments that charge high rents is also pushing up costs for everyone.

“Landlords see that other people are getting away with higher rents, so they’re doing the same,” he said. “This is very much so a phenomenon that’s been well recorded.”

While Mankato can be a difficult place for renters, the data show a different picture for home owners. Fewer than one in five, or 18.2 percent, of owners have a cost burden and just 6.8 percent have a severe cost burden.