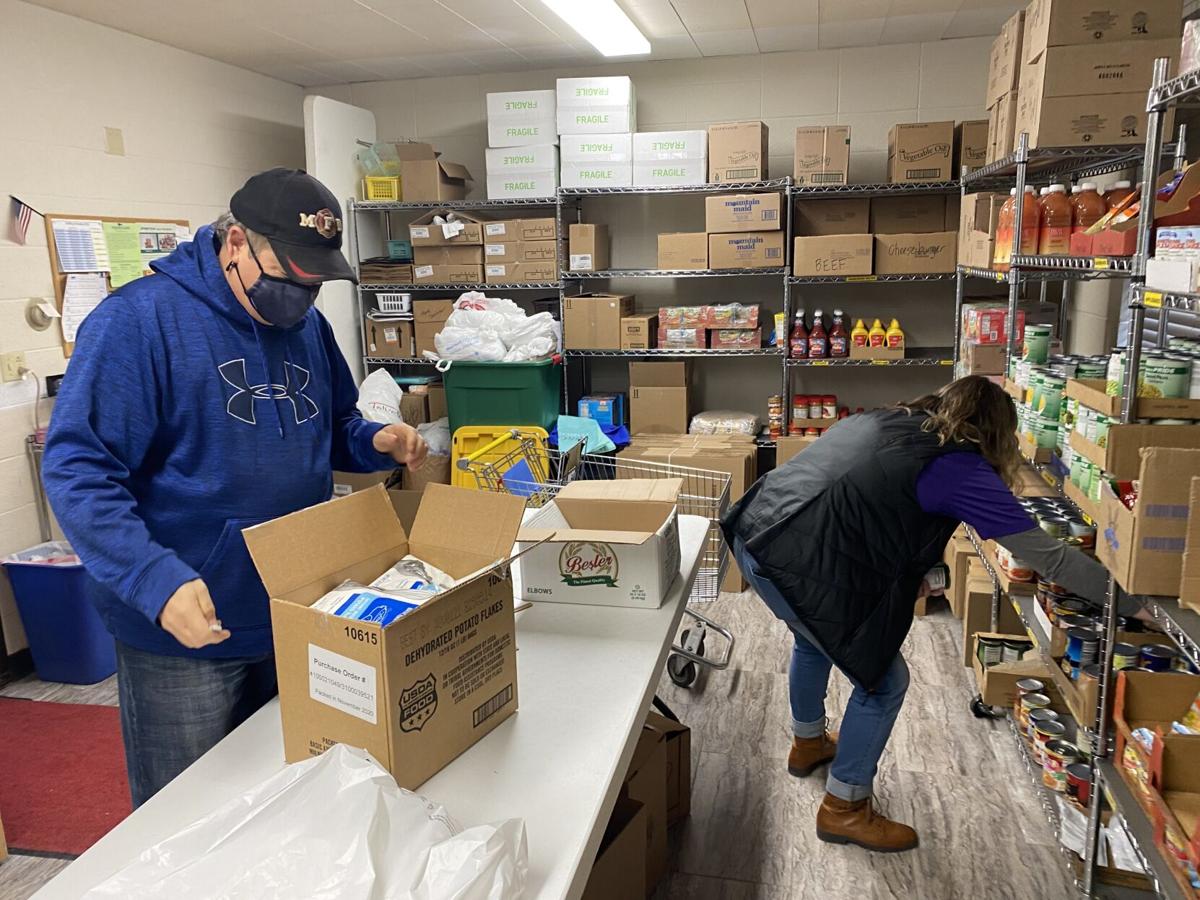 Jon and Jane Klenk have been at the helm of Maple River Loaves and Fishes since 2012. They say getting to know clients on a personal level is the most rewarding part of their job. 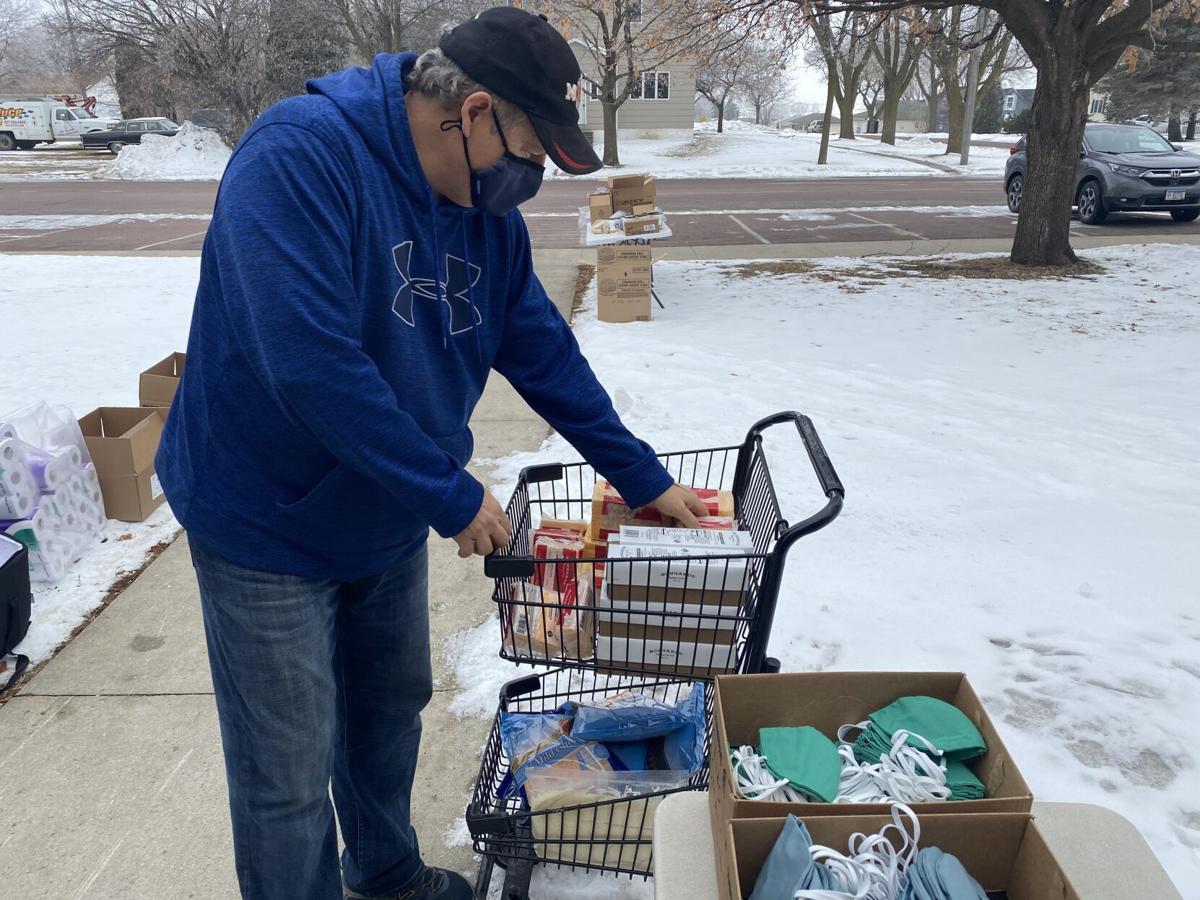 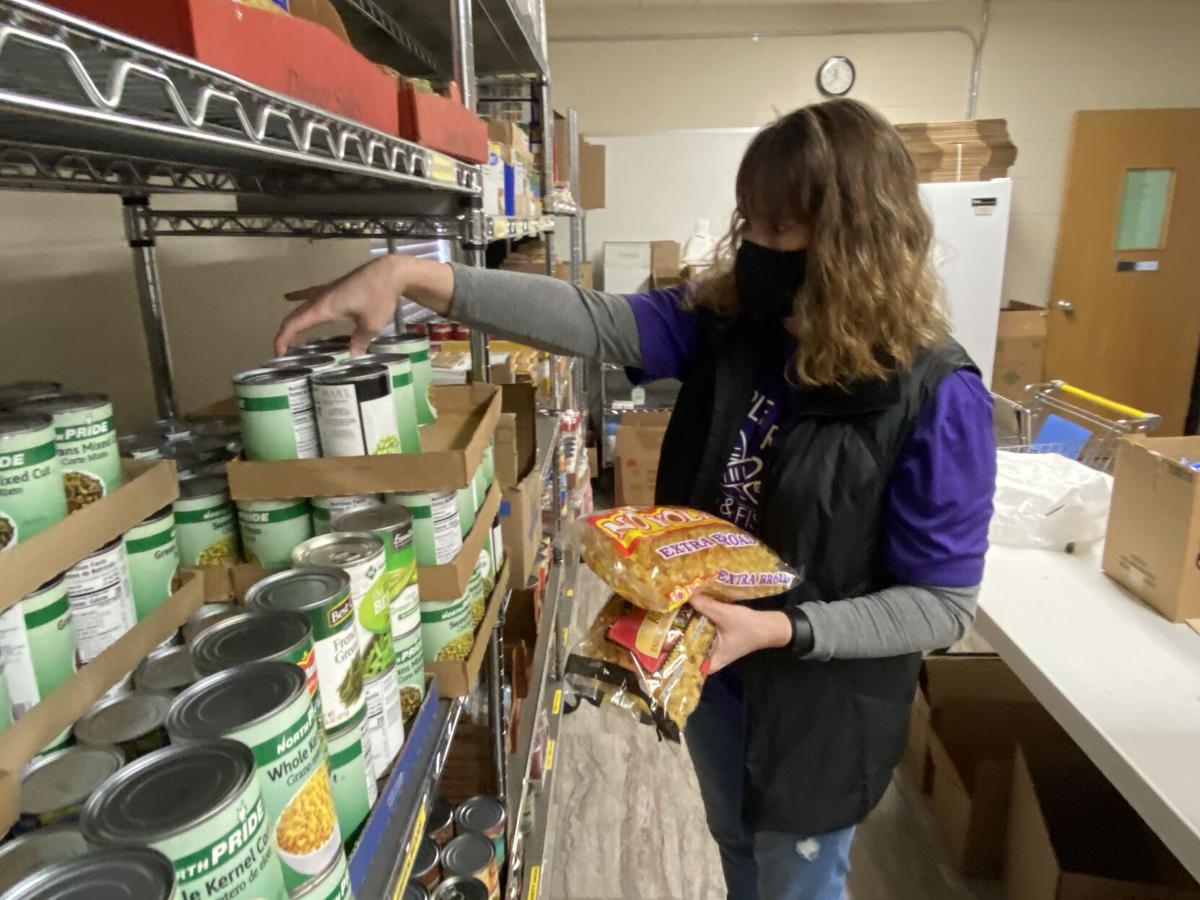 Jane Klenk stocks shelves at St. John Lutheran Church in Mapleton Saturday. “When you’re having a bad day, it puts everything in perspective,” she said.

Jon and Jane Klenk have been at the helm of Maple River Loaves and Fishes since 2012. They say getting to know clients on a personal level is the most rewarding part of their job.

Jane Klenk stocks shelves at St. John Lutheran Church in Mapleton Saturday. “When you’re having a bad day, it puts everything in perspective,” she said.

MAPLETON — When Jon Klenk became director of Maple River Loaves and Fishes in 2013, the nonprofit was serving about 45 families each month from the area. By the end of 2020, the Mapleton-based food shelf was serving more than five times that number.

“Last year we had 258 families,” Klenk said. “The need really increased over the last five or six years.”

Two women founded Maple River Loaves and Fishes a decade ago to meet the growing need in the rural towns in southern Blue Earth County. Klenk and his wife, Jane, began volunteering there in 2012 through their church, helping clients shop and carrying boxes of food out to their vehicles.

Faith Bible Church, where the Klenks attend, is one of nine churches represented by the nonprofit organization’s board of directors. Each week a different church supplies the food shelf with volunteers.

Klenk found that taking the time to talk to and get to know each and every person who comes through the door has become the most important and fulfilling part of the job.

“You come in with preconceived notions of people in need,” Jon Klenk said. “It really breaks down some of the barriers — just meeting the people. So, face to face and hearing little tidbits of their stories as a volunteer certainly really got my interest.”

Kim Krengel, the group’s treasurer who represents one of the churches on the food shelf’s nine-member board, said clients will routinely ask to chat with Jon Klenk to catch up while picking up groceries Tuesdays and Saturdays when the food shelf, located at St. John Lutheran Church, is open.

“He remembers details about their lives that make such a big impression,” Krengel said. “He really has a knack with people and so does Jane. They can talk to anybody. They just have a very good relationship with our clients.”

Jane Klenk, who up until the pandemic mostly worked behind the scenes with Krengel, said talking with clients has opened her eyes to how many neighbors are struggling financially — sometimes having to choose between paying an electricity bill or buying groceries.

“When you’re having a bad day, somebody else is having a day that’s worse than yours,” Jane Klenk said. “It just puts everything in perspective.”

The couple puts in more than 30 hours a week collectively to keep Maple River Loaves and Fishes running smoothly — and that’s on top of their two full-time jobs — without any compensation other than knowing they’re helping people in need.

Jon Klenk handles the day-to-day operations of the food shelf, picking up and unloading food deliveries, stocking the shelves, writing grants and serving as a guest speaker at participating churches to fill in their congregations about the issue of food scarcity in the Maple River school district. Jane Klenk balances the books, makes deposits and handles the monetary donations for the food shelf.

“The way it was set up kind of lends itself to having a couple do it together,” Jane Klenk said.

Board member Gay Rice said at least four volunteers from each of the participating churches take turns each week at the food shelf, stocking and collecting food to bring to clients waiting outside.

Even though the volunteers rotate in and out, the one constant presence every week are the Klenks.

Rice also volunteers at the Mapleton Community Closet — a thrift store that sells low-cost clothing and household items — and got a call recently from Jon Klenk following a conversation he had with a food shelf client new to town.

“It was a young woman with a couple children,” Rice said. “She was evicted from her place and had nothing. Jon called me at the Community Closet and said, ‘Can you fix her up with house goods and clothing for herself and her kids?’”

“Of course, you don’t say no to Jon,” Rice laughed.

Jon Klenk said he’s been humbled by the clients he’s met, including one local resident who was hesitant to take any food out of concern for others who may be even less fortunate.

“I said, ‘Let’s get you some food,’ and he said, ‘That’s good because all I have in my cupboard is peanut butter,’” Jon Klenk recalled. “And yet, he still felt that other people needed it more than him.”

But both Jon and Jane Klenk are quick to point out they couldn’t do what they do without the support of volunteers and the larger community.

“The love and compassion that our volunteers show to these people is amazingly rewarding,” Jon Klenk said. “We have such a generous and gracious community down here in the Maple River area. To see it firsthand is very humbling.”

Both say their favorite part about the work they do at Maple River Loaves and Fishes are the relationships they form with clients. Jon Klenk says those conversations have taught him a lot about the importance of gratitude, and that’s how he spends the first 15 minutes of the day. “I sit with my dog, and invariably the clients’ names and faces come up. They give back more to me than we give to them.”

He said he’s humbled not just by the gratitude of clients, but by the concern they show for others, despite being in a tough financial situation.

“It’s amazing how grateful people are and how much they don’t want to take more food from somebody else, even though their need is great,” Jon Klenk said. “We give out some juice boxes to kids, and just to see the look on kids’ faces when they get a case of juice boxes is worth every single shift. It’s fantastic.”