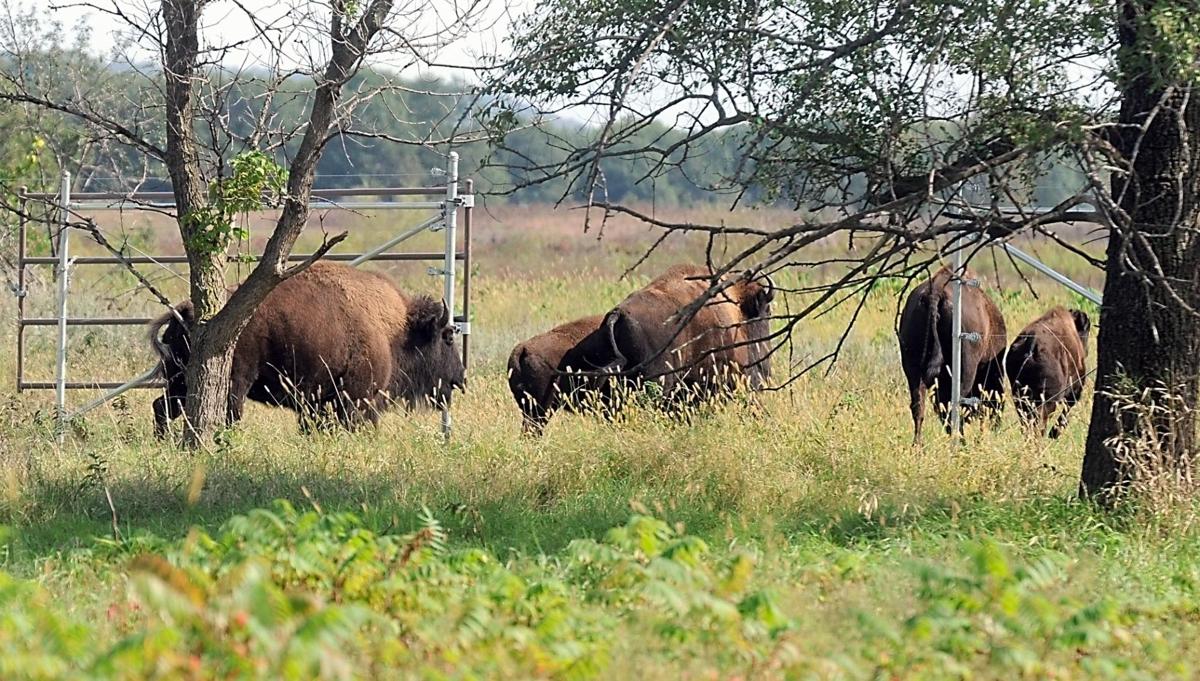 A herd of bison leave an enclosure in Minneopa State Park and run on to the prairie. The 11 bison released Friday will eventually grow to about 40 in the coming years. Photo by Pat Christman 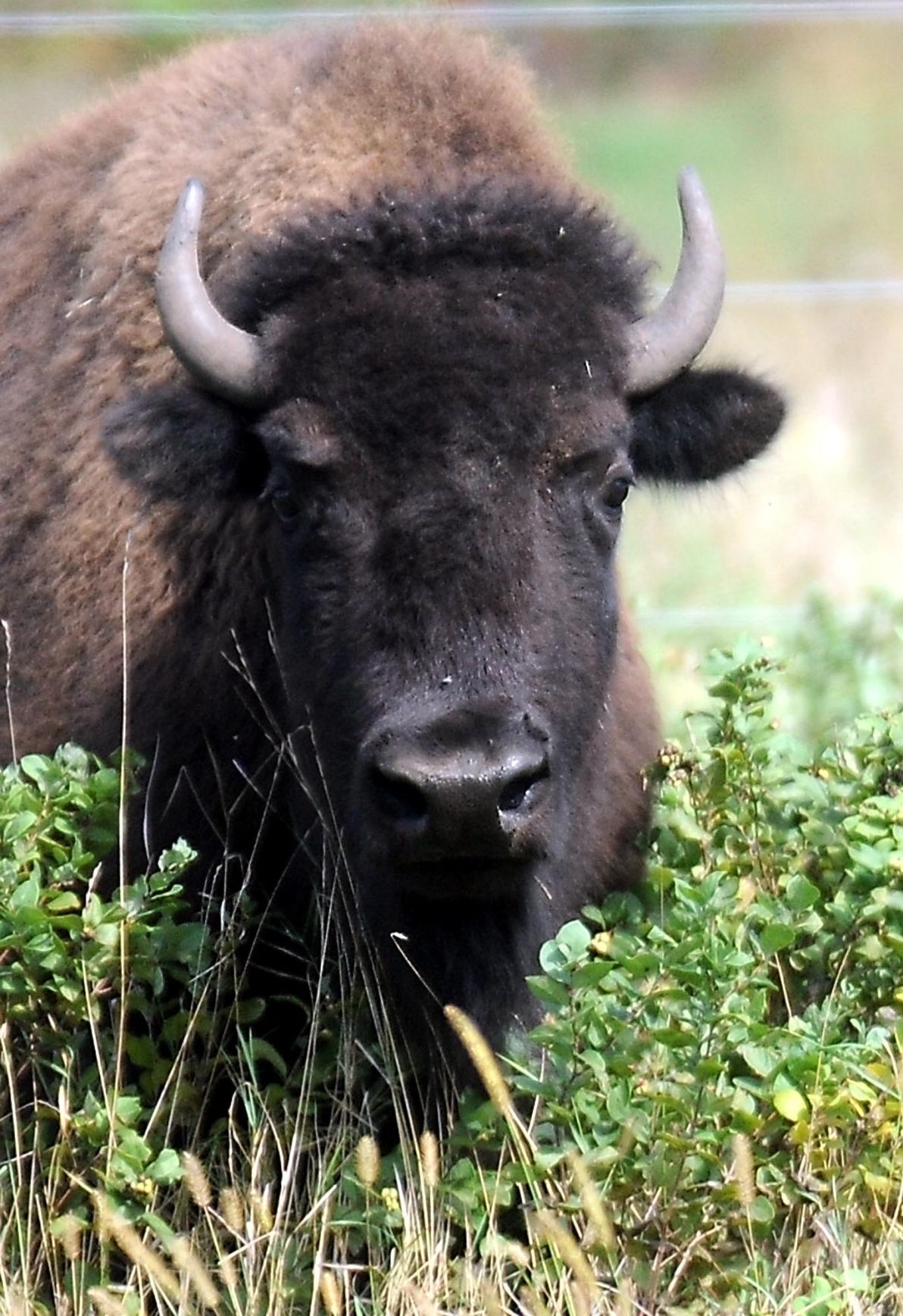 A bison stands in tall grass in an enclosure in Minneopa State Park. Photo by Pat Christman 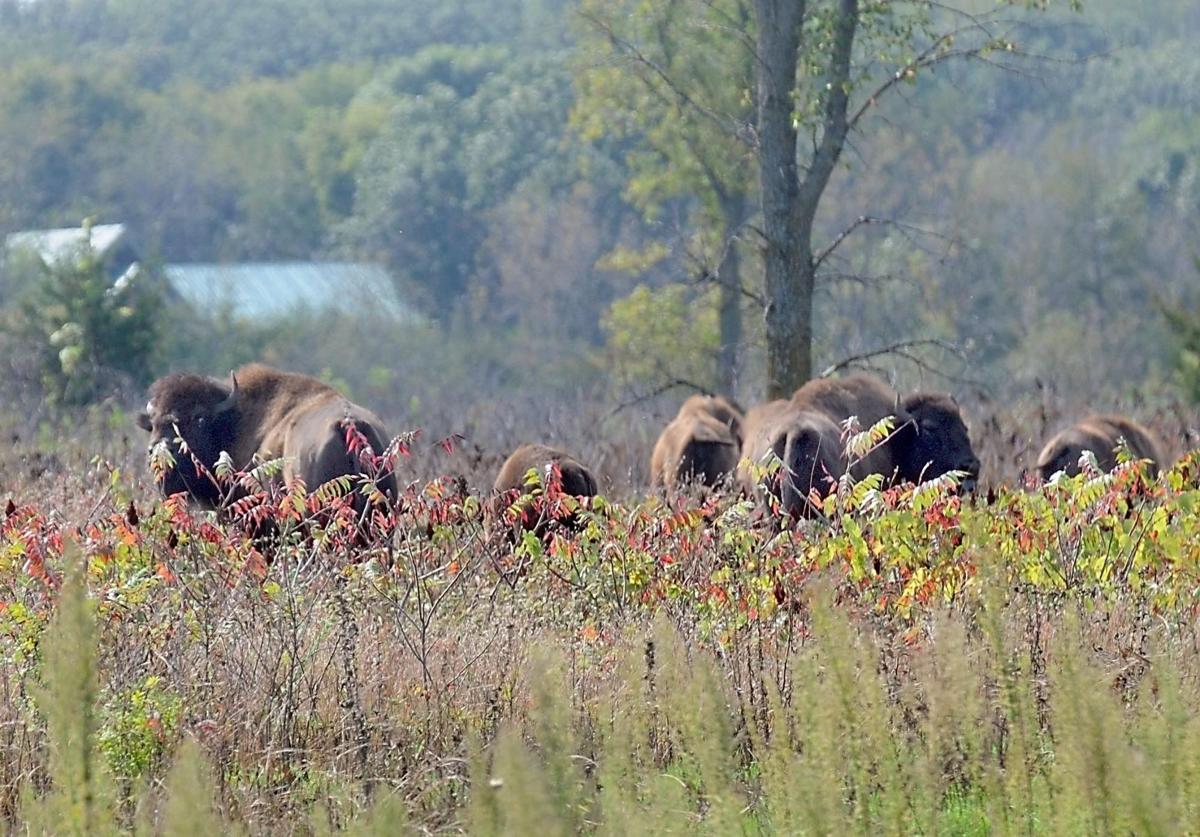 Bison roam through tall grass on the prairie side of Minneopa State Park Friday after being released into the park. Photo by Pat Christman 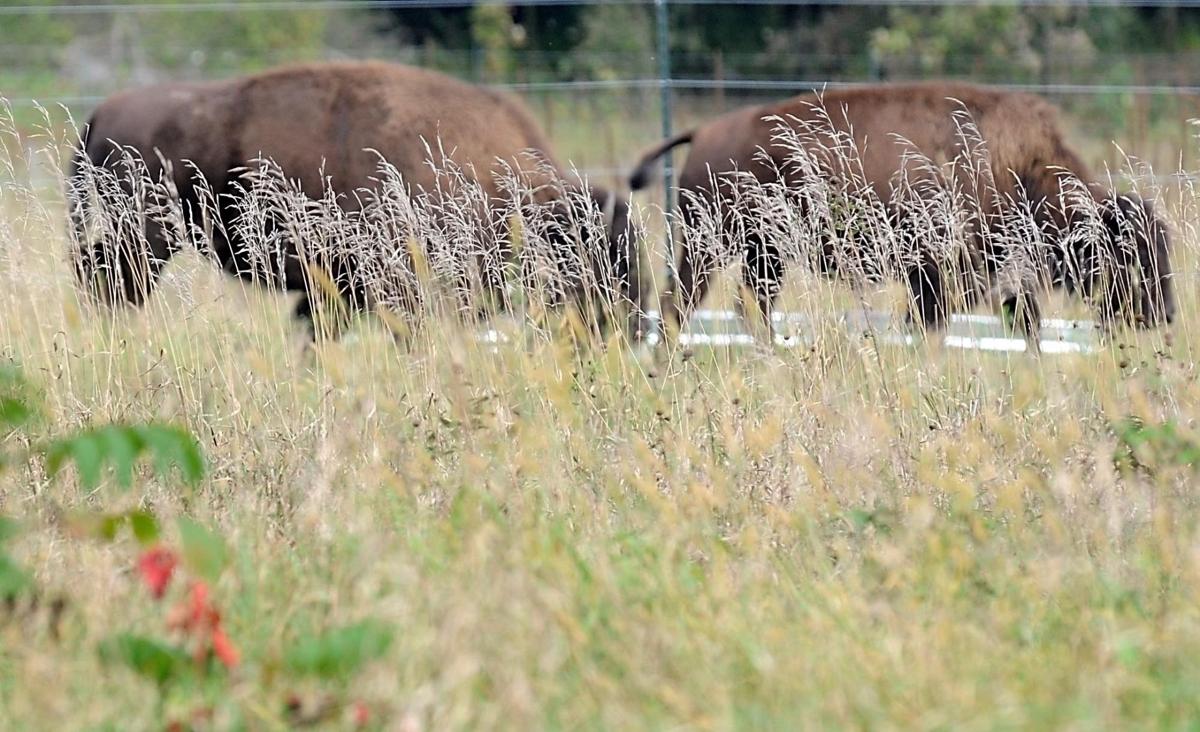 Two of a herd of 11 bison graze in an enclosure in Minneopa State Park. Photo by Pat Christman 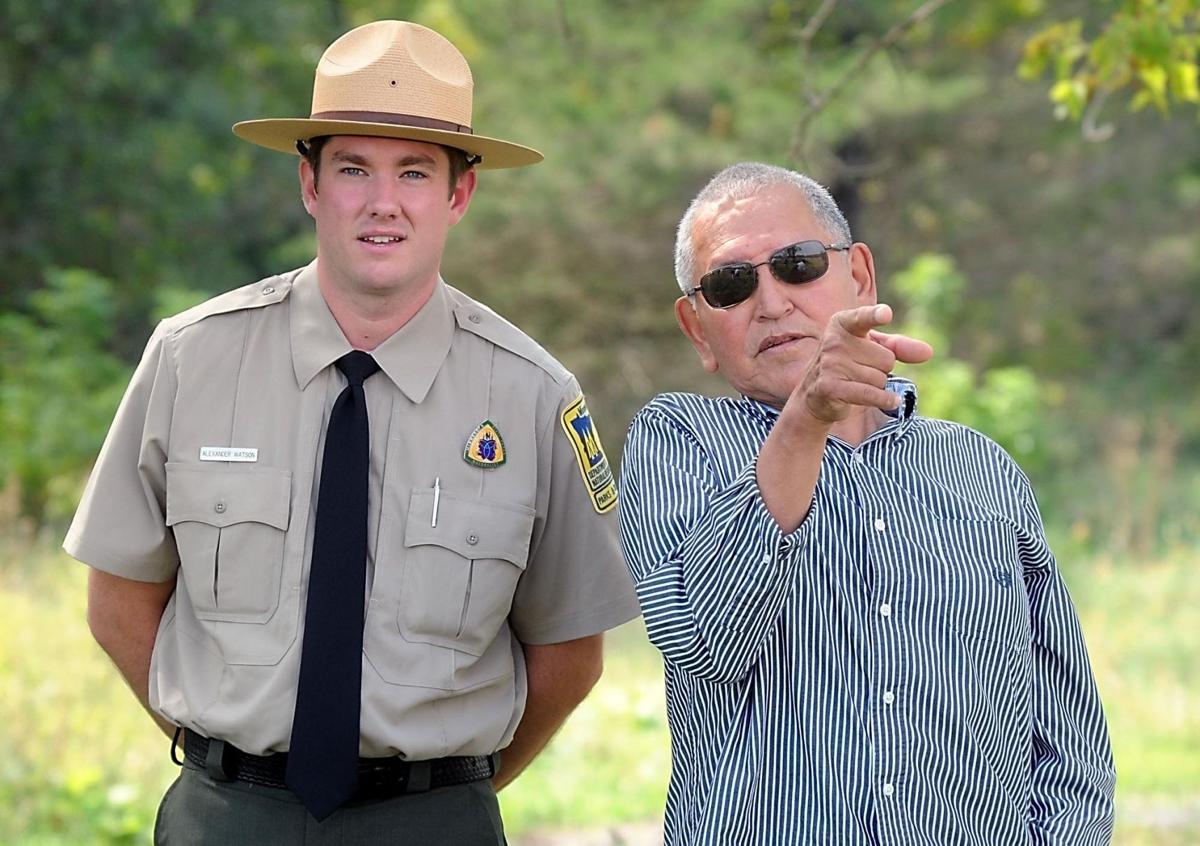 Three of a herd of 11 bison stand in tall grass in an enclosure in Minneopa State Park. The bison, all females, and their offspring are part of a plan to introduce up to 40 bison to the park. Photo by Pat Christman

A herd of bison leave an enclosure in Minneopa State Park and run on to the prairie. The 11 bison released Friday will eventually grow to about 40 in the coming years. Photo by Pat Christman

A bison stands in tall grass in an enclosure in Minneopa State Park. Photo by Pat Christman

Bison roam through tall grass on the prairie side of Minneopa State Park Friday after being released into the park. Photo by Pat Christman

Two of a herd of 11 bison graze in an enclosure in Minneopa State Park. Photo by Pat Christman

MANKATO — The 11 bison inside a small holding area in Minneopa State Park had a gate opened for them by DNR staff, with a new 330-acre prairie home ready for them to explore on the other side.

But with water tanks and plenty of grass available to them in the enclosure they've been in much of the week, the park's new bison herd showed no interest in going anywhere.

With about 20 media representatives looking on from a distance, DNR and Minnesota Zoo staff moved very slowly and quietly along the outside of the fence, trying to coax the bison toward to open gate without agitating them. Some came tantalizingly close to the gate, before circling back and standing in the corner.

A half hour later, more of the bison were contentedly lying rather than standing. The staff moved nearer the bison, this time making a bit more noise and waving their arms to get the bison to move. They did.

When the lead bison finally went through the open gate at a trot, the rest of the herd followed. Soon they were running full-speed from the Seppman Mill end of the park toward the east. They found the gravel road going through the middle of the prairie and stayed on it, not stopping until they came upon the fence on the eastern boundary of their new range nearly 2 miles away. They then walked off through some sumac, exploring their new space.

The bison — three from the Minnesota Zoo and eight from Blue Mounds State Park — are part of a program to expand the number and diversity of a rare group of bison that are very pure genetically, their genes not mixed with cattle DNA. Only about 2 percent of bison have the pure genetics. Bison that have cattle genes do not grow as fast or as large as the genetically pure bison.

The public won't get to go look at the bison for a while. The park (not including the waterfalls part of the park) will be closed for about two weeks while staff ensures the herd is acclimated to its new home.

When the park reopens, it will offer the first opportunity in Minnesota for people to be able to drive through a bison range. At Blue Mounds and elsewhere in the state, bison can only be viewed from outside the fence.

"It's exciting to work on a rare Minnesota species," said Tony Fisher, of the Minnesota Zoo. He said American bison, which once numbered 20 million were driven nearly to extinction, with perhaps 1,000 left when a zoo began protecting and breeding them.

Kathy Dummer, of the DNR, said her agency and the zoo have in recent years set about an ambitious plan to increase the bison numbers dramatically, increasing the herd at Minneopa to 40 and adding more ranges for new herds. Blue Mounds has about 90 bison and the zoo about eight. The DNR hopes to eventually have 500 of the genetically pure bison in Minnesota.

For Glenn Wasicunna, a member of the Dakota, who lives near Good Thunder and was invited to watch the release, the reintroduction of bison locally is symbolic and healing.

Wasicunna, whose Dakota name is Wambdi Wapaho, is from the Canadian Sioux Valley tribe, one of many tribes exiled from Minnesota in the 1860s. He said that after arriving in Minnesota, in his 50s, he began to feel a sense of returning home and has searched for a path to healing from all that has happened to his people.

"This is part of the healing. Bison have been changed and moved and fed different things and now those original bison are back here. That's how I feel — I'm back home."

The bison are all females, ranging in age from 6 months to 4. Two of the females are considerably larger than the rest. The youngest in the herd still stay close to their mothers. Three of the cows are pregnant and will give birth sometime between late March and early May next spring.

To keep things simpler for the new herd as they get used to Minneopa, no bull will be brought in until next year. Dummer said they will likely get a bull from Yellowstone or Theodore Roosevelt Park in the Badlands of North Dakota. That, rather than bringing a bull from Blue Mounds, will allow the introduction of more diversity into the herd.

Beyond new babies, the Minneopa herd will be added to with bison from Blue Mounds or the zoo.

Fisher and Dummer said the herd at Minneopa will also offer plenty of research and educational opportunities.

One area of study will be to see how much bison affect sumac — a native but invasive shrub that the park has been battling for decades. Park staff is hoping the bison will trample and perhaps even develop a taste for the sumac.

Over the summer crews installed more than 5 miles of fence around the grassland in Minneopa. The fencing has several strands of smooth — not barbed — wire on steel posts. Slotted "cattle crossings" have been installed at the entrance to the enclosure and near Seppman Mill so vehicles can drive through the enclosure but the bison can't get out.

While people can't get out of their vehicles while in the range, they can drive up the hill to the mill — outside the fence — and get out to look for bison.