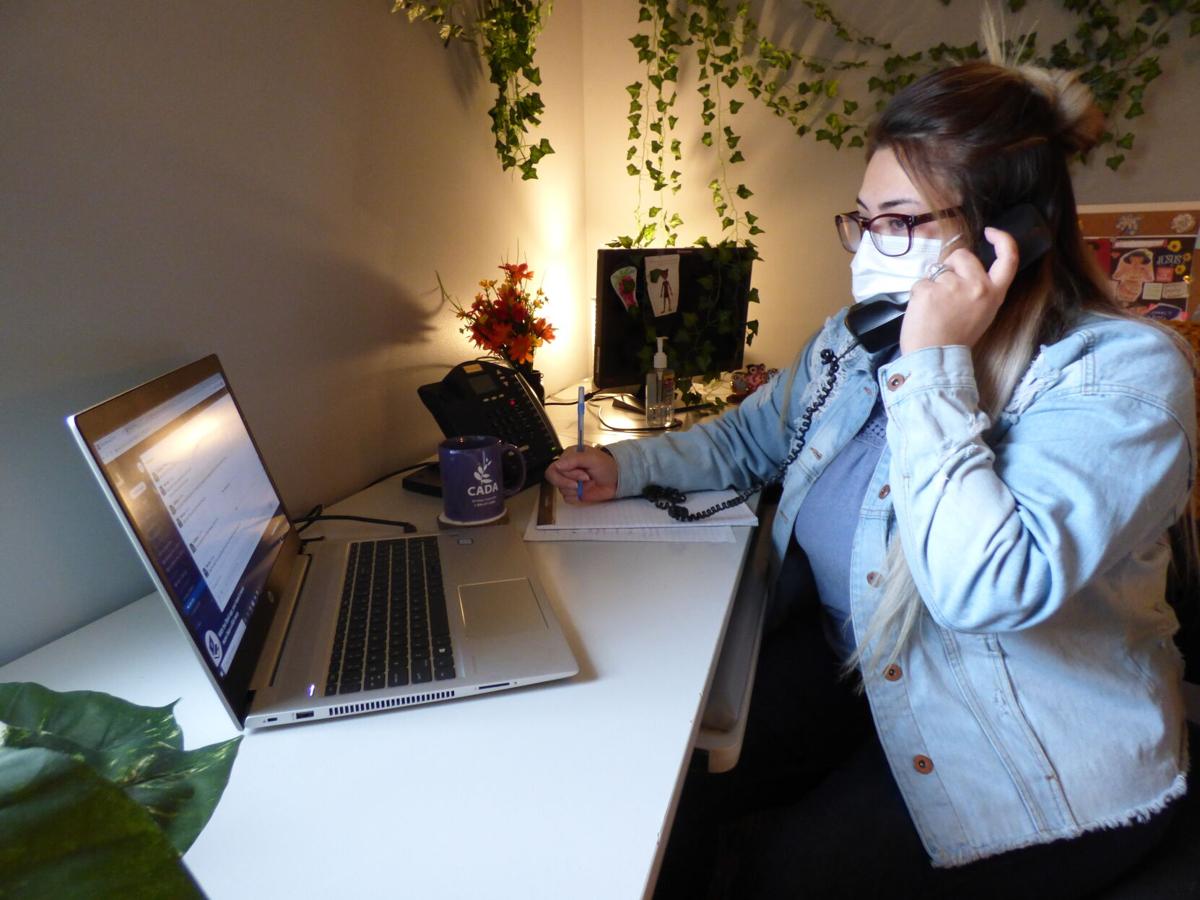 CADA Community Advocate LaDonna Alvarado sifts through police reports to identify and reach out to victims of domestic violence. 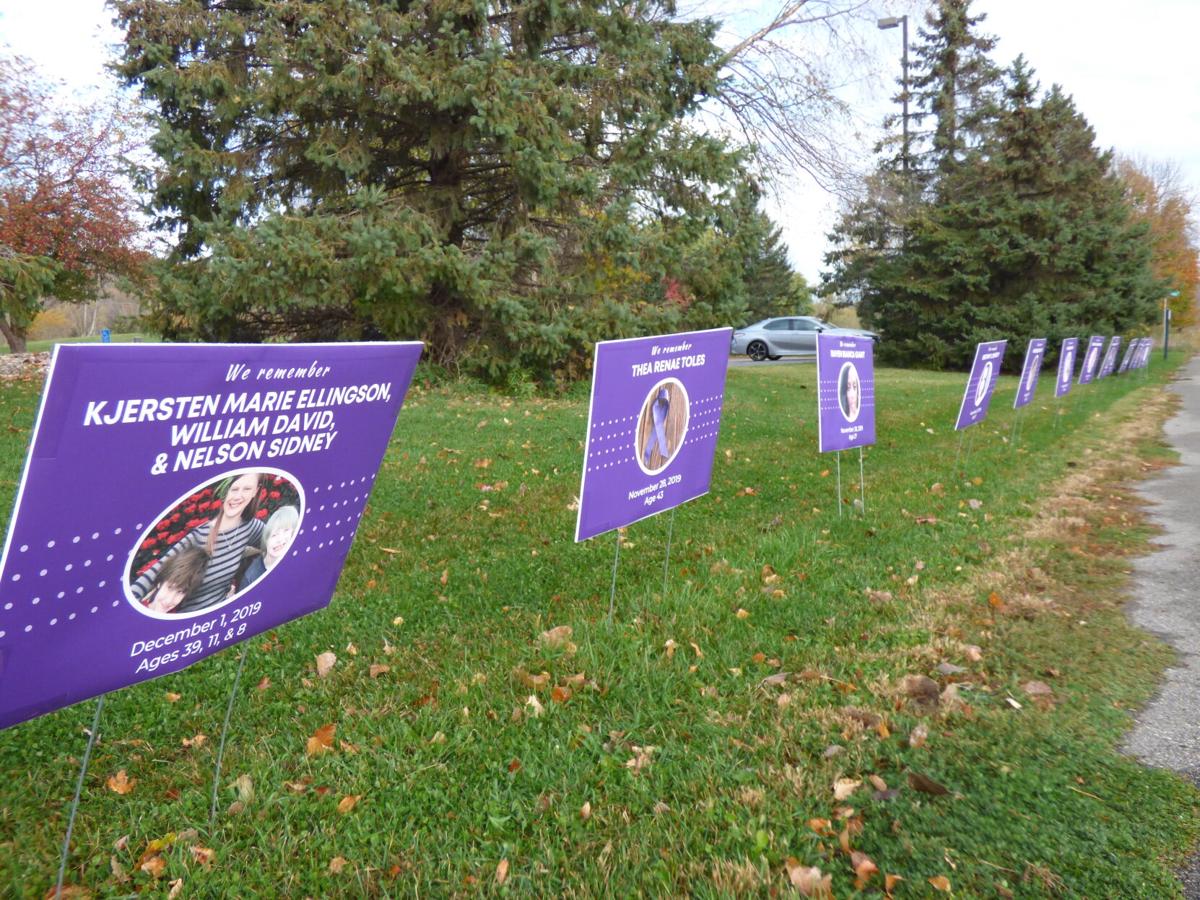 Signs with the names and pictures of each victim killed by a domestic partner last year were placed in front of the CADA Mankato office to commemorate domestic violence awareness month.

CADA Community Advocate LaDonna Alvarado sifts through police reports to identify and reach out to victims of domestic violence.

Signs with the names and pictures of each victim killed by a domestic partner last year were placed in front of the CADA Mankato office to commemorate domestic violence awareness month.

MANKATO — The crisis line for victims of domestic abuse went eerily quiet during the first three months of the COVID-19 pandemic when a stay-at-home order was in place for Minnesotans, leaving victims mostly stuck at home with limited options.

“When this all started and the stay-at-home order was put in place, we saw a dramatic decrease in people reaching out,” said Sara Neidecker-Schoo, a Brown County-based community advocate for the Committee Against Domestic Abuse, a nonprofit serving the nine-county region.

“It was kind of freaky because this does not accurately what’s going on in people’s homes,” she said.

New Ulm Police Chief Dave Borchert said domestic violence calls to his department also dropped during those first few months of the pandemic. Based on his conversations with CADA, school districts and other human services professionals, he suspects the drop was not for lack of incidents but underreporting.

“You would assume those calls would be going up,” Borchert said. “But it was almost like they had turned the dial significantly down. People are at home; they’re not in public. Normally when people get away from their abuser, that’s when things come out.”

North Mankato Police Chief Ross Gullickson, who serves on the board for CADA, said domestic calls to his department dropped by a dozen between 2019 and 2020.

Capt. Paul Barta of the Blue Earth County Sheriff’s Office said their numbers dropped significantly. From March through May 2019, there were 19 domestic calls to the department. For the same months in 2020, that number dropped to six. Even from March to September, those calls dropped from 53 in 2019 down to 30 for 2020.

Waseca Police Capt. Kris Markeson said they typically get one to two domestic calls a week. Between April 1 and October 1, calls dropped slightly, from 36 in 2019 to 33 in 2020.

Mankato Public Safety Director Amy Vokal said those calls remained about the same between this year and the last, but she echoed Borchert’s sentiment that the pandemic itself is likely deflating those numbers, leading to a reluctance to call.

“These are only reported domestics,” Vokal said. “There are a lot of concerns in advocacy groups in the community and with law enforcement that people are concerned about homelessness, having some security issues and may be afraid that they would be kicked out of a place to live and don’t have the means to go somewhere else.”

It’s that kind of a domino effect that complicates the bigger picture and might prevent victims from reaching out, especially when finances are tight.

“We hear victims talk about, ‘My two choices are homelessness or staying in an abusive relationship,’” said Erika Boyer-Kern, community advocacy manager for CADA’s Mankato office.

“Sometimes for the folks that we serve, the violence actually isn’t their number one concern,” she said. “It’s finding housing, child care, food, a job, all these other things that provide safety in a different way.”

Along with the isolation, the economic disparities can be a tool for abusers to maintain control, said Jocylyn Poehler, an attorney for Southern Minnesota Regional Legal Services, a nonprofit that helps victims of domestic violence.

“There is a huge financial control issue that is present in most domestic violence situations and that can impact people’s ability to leave or not,” Poehler said.

Jason Mack, executive director for CADA in Mankato, said while calls were down for the organization’s crisis line during the stay-at-home order, they have since picked up. He suspects the drop and more recent increase also comes down to the logistics of making a confidential call when a person is stuck at home with an abuser with limited excuses to leave their house or apartment.

“We anticipated people being stuck at home with their abuser would have a harder time reaching out,” Mack said. “At that point we instituted a text line and a web chat function to get in touch with us.”

Boyer-Kern said the texting and web chat options allow those in abusive relationships to contact them discretely, especially if they are in immediate danger.

“I just had one the other day where a woman texted and said she wasn’t safe and needed shelter,” Boyer-Kern said. “That is providing a way for folks to reach out without having to talk out loud.”

But Boyer-Kern said making that initial call, text or chat to CADA can be a difficult decision for a variety of reasons.

“It’s hard because they usually have children together,” she said. “They really love this person and there might have been a long period of time where there wasn’t any abuse. It’s not like someone hits you on your first date.”

On top of that, there’s gaslighting, a tactic often used by abusers to sow doubt — questioning a victim’s perceptions of what they experienced. An abuser will also use tactics such as shifting the blame to the victim for the abuse.

LaDonna Alvarado, a community advocate with CADA, spends a significant amount of time sifting through police reports and “cold calling” the victims to see if they need any help.

She typically asks simple questions, allowing for answers that won’t give away who is calling, in case the abuser is present when she calls.

“One of the first things I ask after I introduce myself is, ‘Is this a good time to talk? Are you safe right now? Do you feel comfortable talking to me?’”

Boyer-Kern said those cold calls have proved to be a lifeline for victims who say they never would have made the call on their own. Regardless of who makes the initial contact, she said they are there to listen and connect them to resources if they need them.

“By being able to call and explain the advocate’s role, our services, and by making a connection with that person, we are able to move forward with them to safety plan and work on whatever goals they might have,” she said.

Some of those goals might just come down to a sympathetic ear, especially as more people are facing mental health issues due to the pandemic. That can be compounded when an abuser uses isolation tactics to gain control.

Neidecker-Schoo said she provides everything from emotional support to funding a hotel room if shelters are full or even transportation out of the state to stay with family or friends to help a person leave.

She emphasized that people facing abusive relationships may feel like there are no options, but she and other CADA staff can help those who are reluctant to leave over financial concerns.