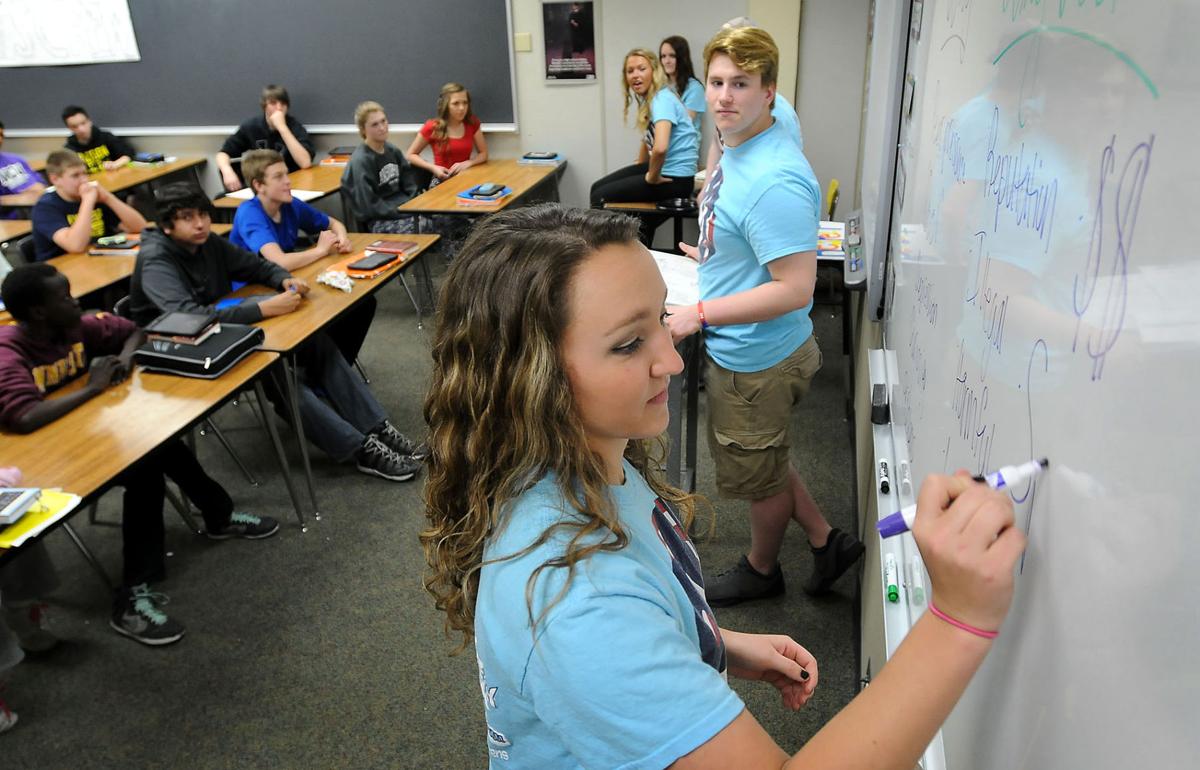 Ashlee Henderson, a member of Project for Teens, takes notes during a presentation for eighth-graders at Mankato East High School on drugs, alcohol and how to resist peer pressure. Photo by John Cross 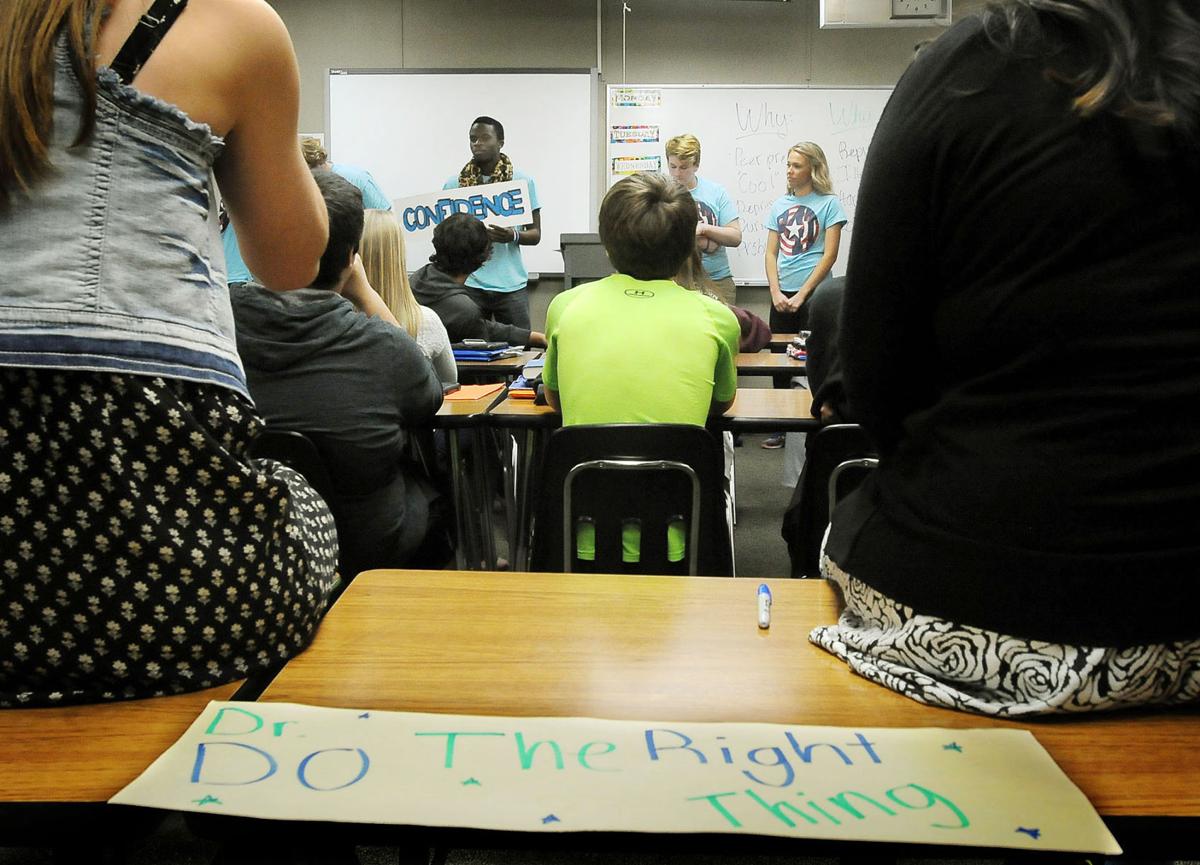 Students in Project of Teens tell a class of Mankato East eighth-graders how they can use "superpowers" such as confidence and integrity to resist peer pressure. Photo by John Cross

Ashlee Henderson, a member of Project for Teens, takes notes during a presentation for eighth-graders at Mankato East High School on drugs, alcohol and how to resist peer pressure. Photo by John Cross

Students in Project of Teens tell a class of Mankato East eighth-graders how they can use "superpowers" such as confidence and integrity to resist peer pressure. Photo by John Cross

Members of Project for Teens program, Mankato East sophomores Haley Scruggs and Anas Osman have taken on the role of real-life, everyday superheroes this year, hoping to make a positive impact on their fellow students.

To hold a panel 6-7:30 p.m. Monday in South Central College's Heritage Hall, the high schoolers from East, West and Loyola give advice to parents, professionals and other teens on how to have important conversations about issues such as drugs, alcohol and sex. The teen mentors will be part of a frank discussion about teen sexuality, positive decision making and more.

“We're hoping to get a lot of adolescents there, but also parents, just to start a discussion about how do you talk to your kids about sex and sexuality,” said Project for Teens coordinator Kate Cox.

Even parents who think they know about the types of things that today's teens are facing can benefit.

“You have this whole new generation that deals with things that we never dealt with as teens,” Cox said. “There's sexting and cyberbullying and peer pressure going on online.”

Scruggs and Osman, as well as 17 other Mankato East teens, have been giving presentations on drugs, alcohol and sex to sixth-, seventh- and eighth-graders since the beginning of the school year. On Friday, they performed skits in front of a health class, acting out the appropriate responses to situations rife with peer pressure.

Cox, a pediatric health care provider at Mayo Clinic Health System in Mankato, said the lessons mean more to teens when they're coming from their peers.

"These are the exact same messages I'm giving kids every day, but it's so much more effective when it's someone closer to their age talking about their own personal experiences," Cox said.

The theme behind all the teens' presentations this year is “super powers.” Students are asked to identify one of their strengths and talk about how they've used use it to either combat peer pressure or have a positive influence on a peer.

"I was in a situation once where someone I know, but am not necessarily friends with, was tweeting that he was really sad and didn't have anyone to talk to," she said. "At first I was hesitant about saying anything to him ... I wasn't sure if he'd want that. But I did. I had a really long talk with him and afterward he just thanked me so profusely."

"My personal experience has to do with drugs and the question 'Have you been offered drugs before?'" Plagman said. “Which I have. I used the confidence I have in myself to say 'no,' even though it meant removing that person, who was a pretty good friend of mine, from my life."

Cox said the Project for Teens students, who are selected for the program as part of an intensive application and interview process, aren't shy when it comes to talking about some of the more intense situations they've happened to find themselves in.

Elise Braswell, another sophomore, said if they felt too awkward about things, they wouldn't be able to do their job: offering advice and support to not only other teens, but (gulp!) their parents.

Adults? Are you listening?

“You don't want to talk to us about the 'birds and the bees,'” she said. “You should just come straight out with it. Don't talk to us like we're 6 years old please.”

What: Teens Tell It Like It Is — Project for Teens panel

More information: RSVP by emailing projectforteens@gmail.com. Pizza and snacks will be provided.