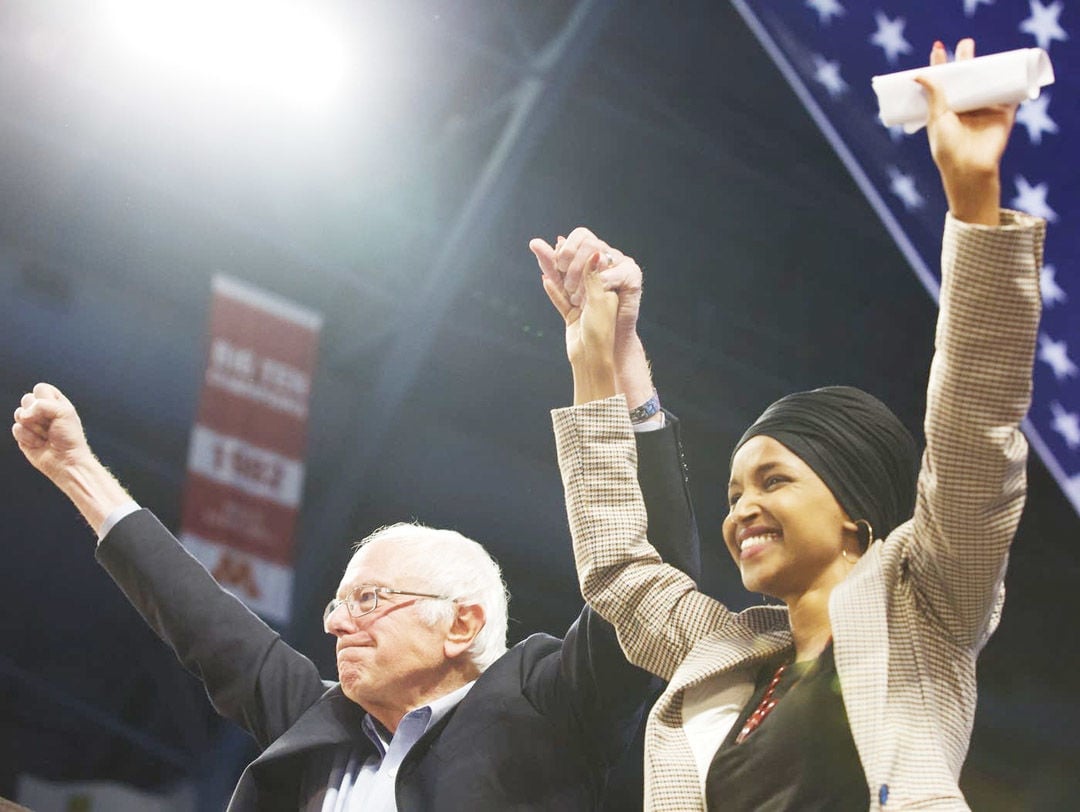 Democratic presidential candidate Sen. Bernie Sanders (left) is joined by U.S. Rep. Ilhan Omar of Minnesota on stage at a campaign rally at Williams Arena in Minneapolis on Sunday. 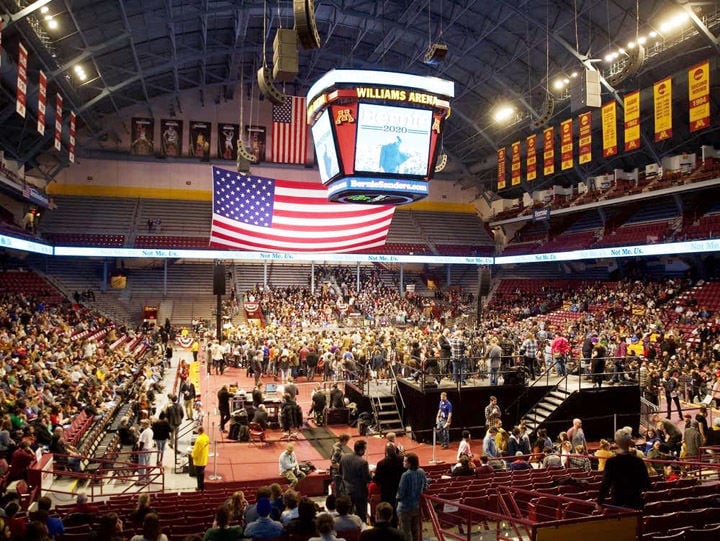 A crowd starts to fill Williams Arena in Minneapolis on Sunday, Nov. 3, 2019, ahead of a campaign rally for Democratic presidential candidate Sen. Bernie Sanders. 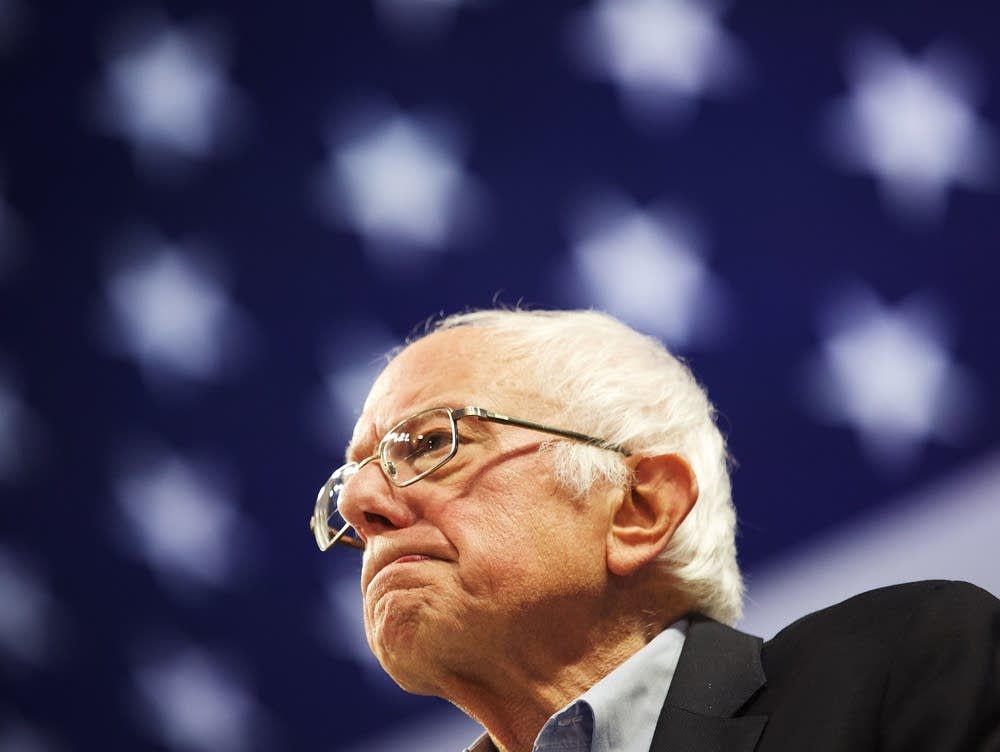 Democratic presidential candidate Sen. Bernie Sanders (left) is joined by U.S. Rep. Ilhan Omar of Minnesota on stage at a campaign rally at Williams Arena in Minneapolis on Sunday.

A crowd starts to fill Williams Arena in Minneapolis on Sunday, Nov. 3, 2019, ahead of a campaign rally for Democratic presidential candidate Sen. Bernie Sanders.

Aloni Cruz was in line outside Williams Arena by 6 a.m. Sunday.

She arrived 12 hours early and spent three hours alone before anyone else joined her, but it didn’t matter: Cruz wouldn’t miss a chance to see Bernie Sanders in person.

“He’s been fighting for the working class for a long time, for people of color, for immigrant rights,” she said of the Vermont senator and Democratic presidential contender. “He just really inspires me a lot.”

Cruz and thousands of other supporters packed the arena for a campaign rally for Sanders, who stopped in Minneapolis to showcase his recent endorsement from Democratic U.S. Rep. Ilhan Omar.

Sanders won Minnesota in the 2016 Democratic presidential caucus. He’s making a play for the state again, even as Minnesota Sen. Amy Klobuchar wages her own campaign for the Democratic nomination.

President Trump is focusing heavily on winning Minnesota, too, after narrowly losing the state to Hillary Clinton in the 2016 election.

As rally-goers lined the sidewalks Sunday afternoon, a small group of Trump’s supporters gathered outside the arena, too. Waving Trump flags and wearing his regalia, the Republican president’s backers said they didn’t want Sanders’ event to go unanswered.

But overall, it was a night for searing criticism of the president.

“We have a president of the United States who is a pathological liar, who is running the most corrupt administration in history,” Sanders told the crowd, who responded with chants of, “Lock him up!”

The event started more like a concert than a political rally, with Minneapolis rapper Brother Ali and Prince’s former band, New Power Generation, warming up Sanders’ crowd ahead of speeches by Omar, Minnesota Attorney General Keith Ellison and others.

Once on stage, Sanders highlighted his working relationship with Omar and their shared left politics including the Green New Deal. The self-described Democratic socialist continued his message of social inclusion, justice and economic equality.

“What we are building is a multi-racial, multi-generational, working-class movement,” Sanders said. “We are tired of the exploitation of working people of this country.”

Omar said Sanders “has always been steadfast in his principles ... ones that are being finally accepted now. For a long time Bernie was underestimated. His ideals weren’t taken seriously by the establishment because he refused to fall in line and conform to the pressures in Washington…”

“In the sea of corruption, he continuously has stood for justice and never bowed down to special interests. That’s the resolve we need in a president.”

The crowd appeared to skew younger, mainly younger than 40, but people of all ages and from all parts of the state drove to Minneapolis to see Sanders.

Jess Tryhus and Scott Villery, who have supported Sanders since 2015, drove from Owatonna. The couple said student loan forgiveness is one of their top issues — they said they have $400,000 in debt between them.

Sanders said Sunday he’d cancel all student debt as president, paying for it by a small tax on “Wall Street speculation.”

Villery said he also supports Sanders’ positions on Medicare for All and keeping corporate money out of politics.

When asked if they would support another nominee besides Sanders, Tryhus and Villery said they are undecided.

“I’m not a huge fan of anyone else,” Tryhus said, aside from Tulsi Gabbard, the congresswoman from Hawaii.

Many in attendance were far more energetic about him than any other Democratic candidate, even if they weren’t “Bernie or bust” voters who’d only support their top choice.

Peter Tran, a school employee from Duluth, said he’d probably vote for whoever won the Democratic nomination, but doesn’t have the same faith in other candidates as he does in Sanders. He wasn’t bothered by Sanders’ recent heart attack, either.

“Even Bernie on deathbed is a lot better than any of the other candidates,” Tran said.

Bridget Clifton of Houlton, Wis., said Sanders is the only Democrat she could vote for and “feel good about it.”

She and other supporters cited Sanders’ consistency in his political record as a primary reason for their support.

“What he says he’s going to do, he does,” Clifton said. “Just for decades, there’s not really anyone out there in the field that has a record like that.”

Among the Trump supporters who gathered ahead of the rally to counter Sanders’ appearance, Melodie Black of Red Wing said Sanders’ brand of policies would be dangerous for America.

“Socialism does not work. Let’s look at Venezuela. It does not work,” Black said. “Children are starving to death. There’s no medicine for them there. If you are a diabetic there, you are going to die.”

It was Sanders’ first appearance in Minnesota since he visited the state fair in August.

Grace Lydia Miller, 89, of rural Waldorf, Minnesota, was called home by her Savior Thursday, Sept. 23, 2021 at the Mayo Clinic Health System-Mankato. A funeral service to celebrate a life well lived will be held Monday, Sept. 27, 2021 at 11:00 AM at First Lutheran Church in Waldorf, MN, wher…