KingPins Bowling Center was engulfed in flames in a morning fire Sunday in St. Peter. 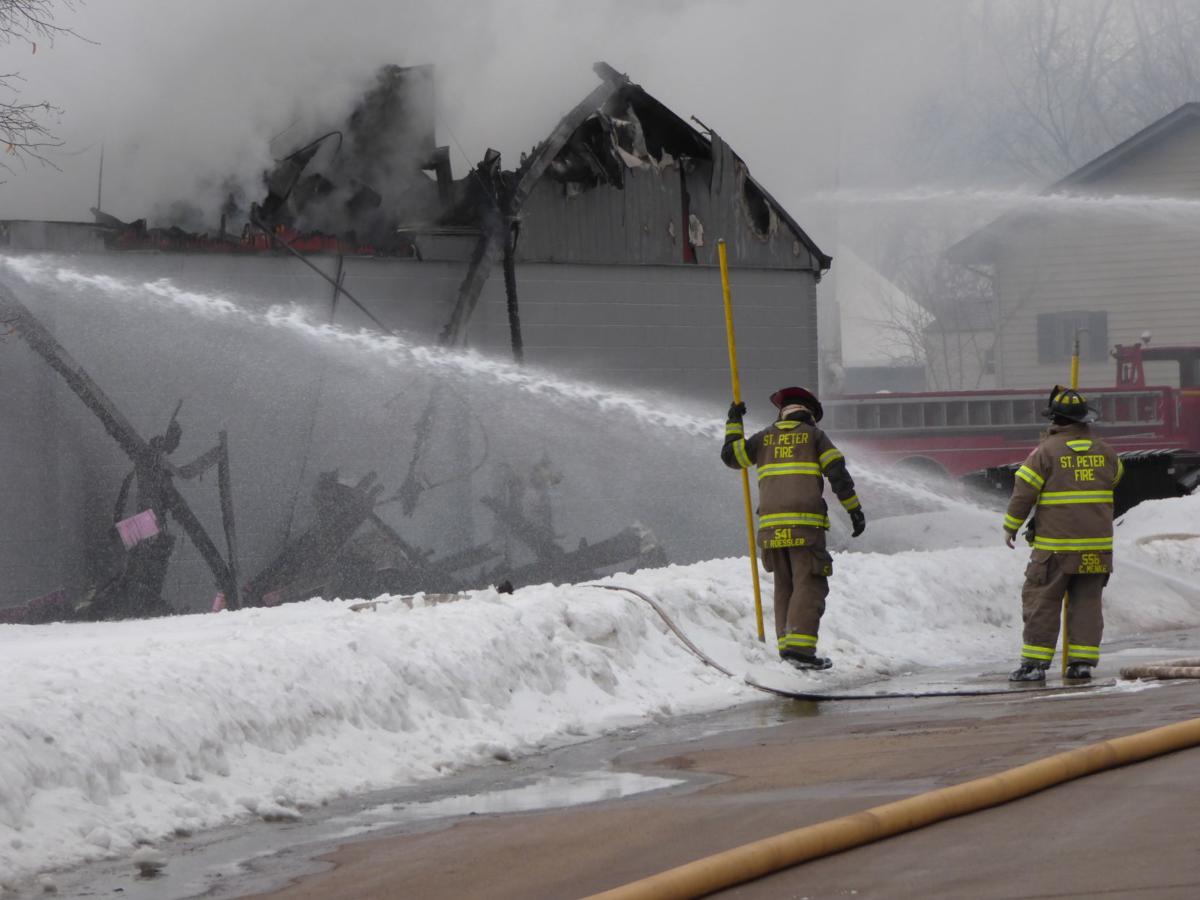 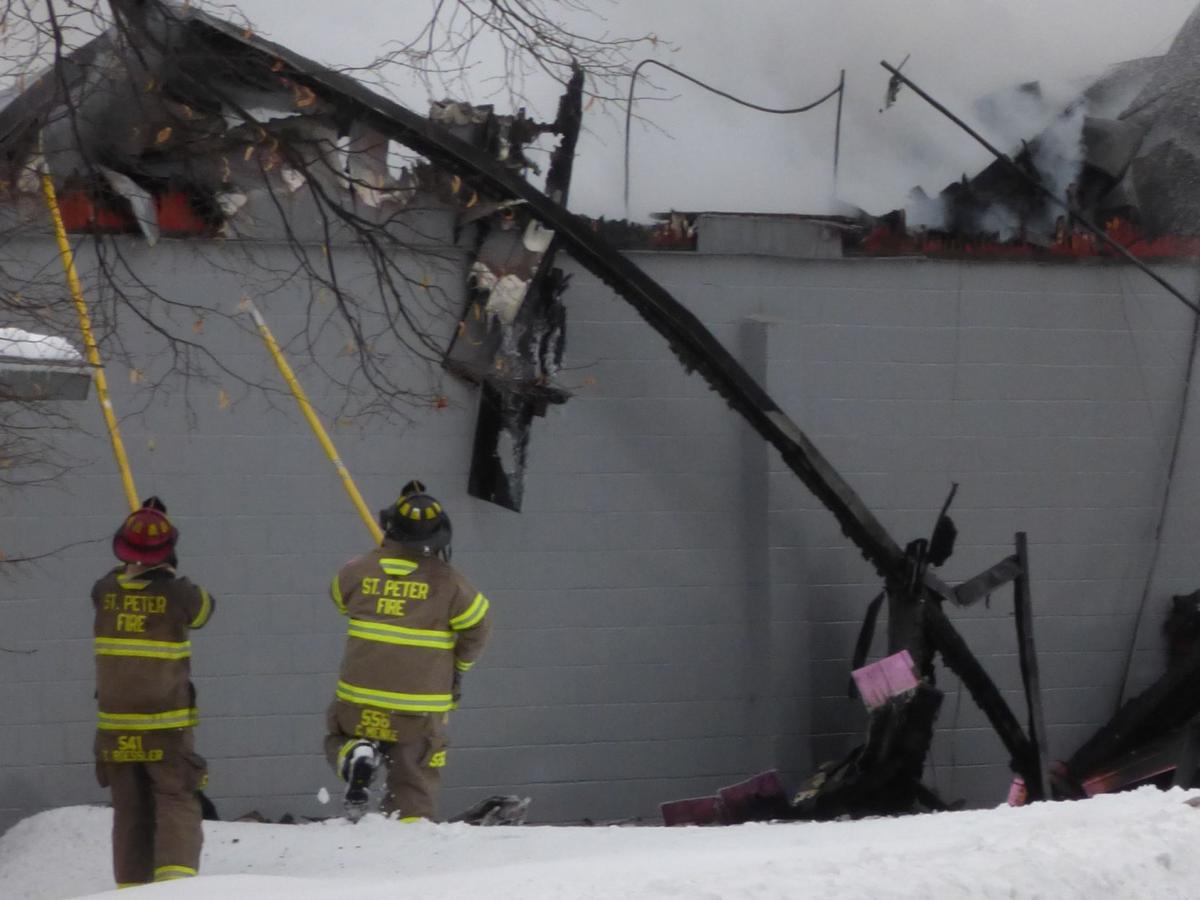 KingPins Bowling Center was engulfed in flames in a morning fire Sunday in St. Peter.

A state fire marshal was at the fire site at 1671 S. 3rd St. later in the day, and the cause remains under investigation, according to the St. Peter Fire Department.

Tyler Erickson, of St. Peter, who lives a block away on S. 4th Street, said he saw the flames from his house shortly after 7 a.m.

“I looked out and you could see the big flames shooting up with the smoke,” Erickson said.

Erickson said he witnessed one of the firefighters collapse shortly after he arrived, although no injuries were reported from the fire and no other buildings nearby were reported damaged.

The popular bowling alley on the south edge of town was purchased by Jessica Tonsfeldt and Dwight Selders in 2014. Selders was visibly shook up as he watched the building burn.

Selders’ mother, Ruth Grover, started him bowling there at age 5 and coached him, according to a St. Peter Herald story published in September 2014 when the couple bought the business. In fact, Grover started the youth league in the mid-1980s at then Sioux Trail Lanes, which became Bowlero Lanes and since 2011 has been KingPins.

“There’s not any other bowling alley I’d like to own,” Selders had told the St. Peter newspaper. “This has ties to my family for years. There’s the sentimental value that my mom started the youth league. My grandparents, Donald and Lucille Jaycox, used to live down the block, and it’s where I grew up.”

Grover, who died in January 2019, was an avid bowler herself and enjoyed watching the youth and high school teams at KingPins, according to her obituary.

Mike Langlie, president of Mankato Area Bowling Association, was last bowling there on Tuesday night. He said they incorporated the St. Peter bowling community into their association about three years ago, and leagues from as far as Shakopee, Belle Plaine and New Prague hosted games at KingPins.

“It’s not just a loss of a business, because in the bowling community we are all kind of one big family,” Langlie said. “If something happens to one center, everyone feels empathy for it. It really is a personal loss for a number of people because we are so tight knit as a group.”

He said Selders and Tonsfeldt were more than just proprietors — they were good friends — and the association is looking into what they can do to assist anyone affected by the fire.

“We’re all looking for ways to help,” Langlie said.

St. Peter City Council Member Keri Johnson posted on her Facebook page that the fire is a terrible loss for the community.

“News of the building fire at KingPins bowling alley this morning is so sad,” Johnson wrote. “My heart is with the owners of the business, its employees, and to all those who hold dear memories from this establishment over the years.”

For several years, Selders has coached the Cleveland/Le-Sueur-Henderson/Minnesota New Country School/St. Peter (CLMS) Knights High School bowling team. His son and daughter both played on the team when they were in high school.

The building has been a bowling alley for more than 50 years and was constructed in 1962, according to the CLMS Knights KingPins Bowling Center website.

Mankato resident, Phyllis Jean Fenton, age 93, died Wednesday, April 8, 2020 at Laurel's Peak in Mankato. Memorial services will be held at a later date. Interment will be at Ft. Snelling National Cemetery in Minneapolis. Phyllis was born March 14, 1927 to Glen ad Alma (Skipton) Foss. She is…

Sister Mary Emmanuel Fallenstein, SSND, 92, died Monday, April 6, 2020 at Our Lady of Good Counsel, Mankato. Funeral services will be held at a later date and will be published at that time.

A private family graveside service will be held for George H. Fowler, age 89, of Fairmont. A celebration of life service will be held at a later date. George passed away unexpectedly from natural causes on Monday, April 6, 2020, at his farm near Winnebago, MN. The Lakeview Funeral Home and C…