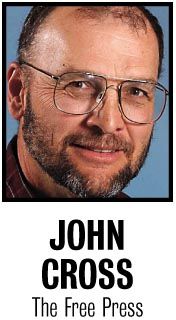 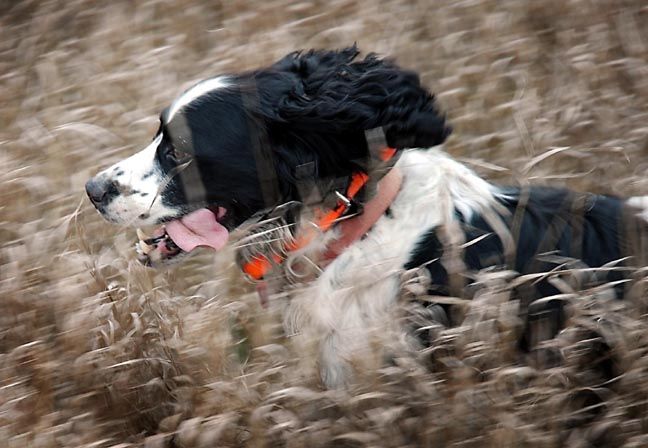 Dog Lovers 4 Safe Trapping MN has a goal of making the countryside safer for their canine hunting partners by calling for more restrictions on the use of body-gripping traps. Twenty dogs were killed in the devices in 2012. 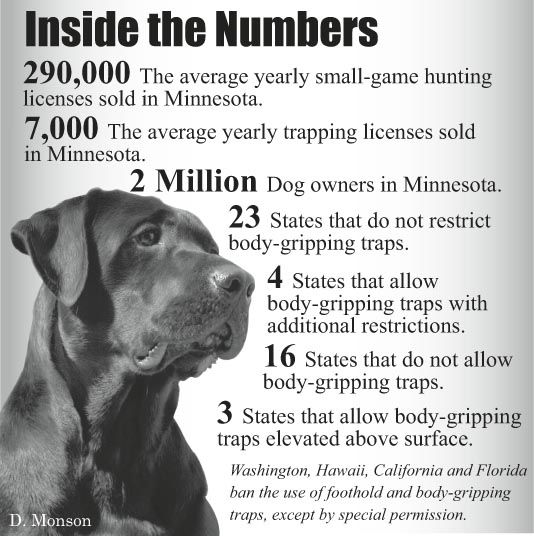 Dog Lovers 4 Safe Trapping MN has a goal of making the countryside safer for their canine hunting partners by calling for more restrictions on the use of body-gripping traps. Twenty dogs were killed in the devices in 2012.

Accompanied by his hunting partner, the Brainerd resident had been setting a few traps to catch foxes.

“I scouted the area for any signs of other trappers and didn’t see anything,” he said. “I was making artificial sets for fox along a lake.” While he placed the foothold traps, Penni trotted off to explore.

When he was ready to leave and unable to locate his dog, he began to search.

“She was in a body-gripping trap about 50 feet away from the truck,” he said. Somehow he had failed to notice the cubby box — an enclosure that housed bait and the deadly trap — in his initial search.

Because of the construction of the box, the dog was able to get her head in far enough to trip the device, which snapped around her head and crushed her windpipe.

Ironic perhaps, but one that also lends a measure of credibility to Reynold’s position that he’s not against trapping.

Reynolds now is president of Dog Lovers 4 Safe Trapping MN, a non-profit group formed last May in response to reports of growing numbers of dogs being killed in body-gripping traps and the lack of action by lawmakers to restrict their use.

In less than a year, membership of the group has swelled to more than 3,000.

Their goal is to get legislators to pass laws restricting the use of certain body-gripping traps and to prevent the accidental deaths of dogs caught in them.

Of specific concern, the group wants the minimum height of so-called pole-sets increased to five feet, banning the use  of all but the smallest body-gripping traps when used as ground sets and restrictions on how and where cubbies — a type of containment system for traps and bait — are used.

Legislation spelling out more restrictive regulations for the devices were introduced last session but failed to make it to committee.

Instead, watered-down regulations more to the liking of the Minnesota Trappers Association were approved.

And hunting dogs have continued to die in the deadly devices.

In 2012, Reynolds said 20 dogs were killed, 13 of them after the new regulations went into effect.

“That’s just the dogs that have been reported,” Reynolds said, adding that undoubtedly some dog owners never report the incident and some dogs killed in traps are never found. “A trapper isn’t likely to call to tell someone they killed their dog.”

Bills have been introduced for the current session  — House File 456 and Senate File 452 — that would make the woods safer for hunting dogs and other canine companions.

“We’re not the first state to have this problem,” said Rep. John Ward of Brainerd, a co-author of the house version.

“Wisconsin implemented regulations similar to those proposed in our bill and we’ve watched pretty closely,” he said. “Number 1, it has proven very effective in reducing the number of dogs killed and number 2, it has had no negative impact on fur production.”

Ward is uncertain whether the current version, which contains the same language as the earlier bill that the Environment and Natural Resources committee declined to hear last session, will receive a hearing.

“Like any other legislation, it’s the squeaking wheel that usually gets the grease,” he said. “It will take a groundswell of support.”

The Minnesota Department of Natural Resources is waiting to see what, if any, legislative action might be taken before they get involved with what the agency views as a “social issue,” said Jason Abraham, the DNR’s furbearer specialist.

“We support restrictions that would reduce the possibility of the inadvertent capture of dogs,” he said.

In the event the Legislature does nothing, the agency has prepared a draft of more restrictive regulations that could be implemented without legislative action.

“They’re probably less restrictive than some would prefer but would still offer significant protection for dogs,” he said.

Reynolds said that some lawmakers believe that dogs dying in traps is a trapping issue.

“They don’t understand that it’s really a hunting issue,” he said, explaining that when Oct. 20, the opening of the trapping season in Minnesota rolls around, he and many other grouse hunters call it quits, fearing that their hunting dogs might wind up dead.

Other hunters would seem to agree.

Last weekend at Pheasant Fest in St. Paul, about 500 of them picked up cards at the Dog Lovers 4 Safe Trapping MN booth, to be mailed to their lawmakers expressing support for making the woods a little safer for their hunting partners.

John Cross is a Free Press staff writer. Contact him at 344-6376 or by e-mail at jcross@mankatofreepress.com.