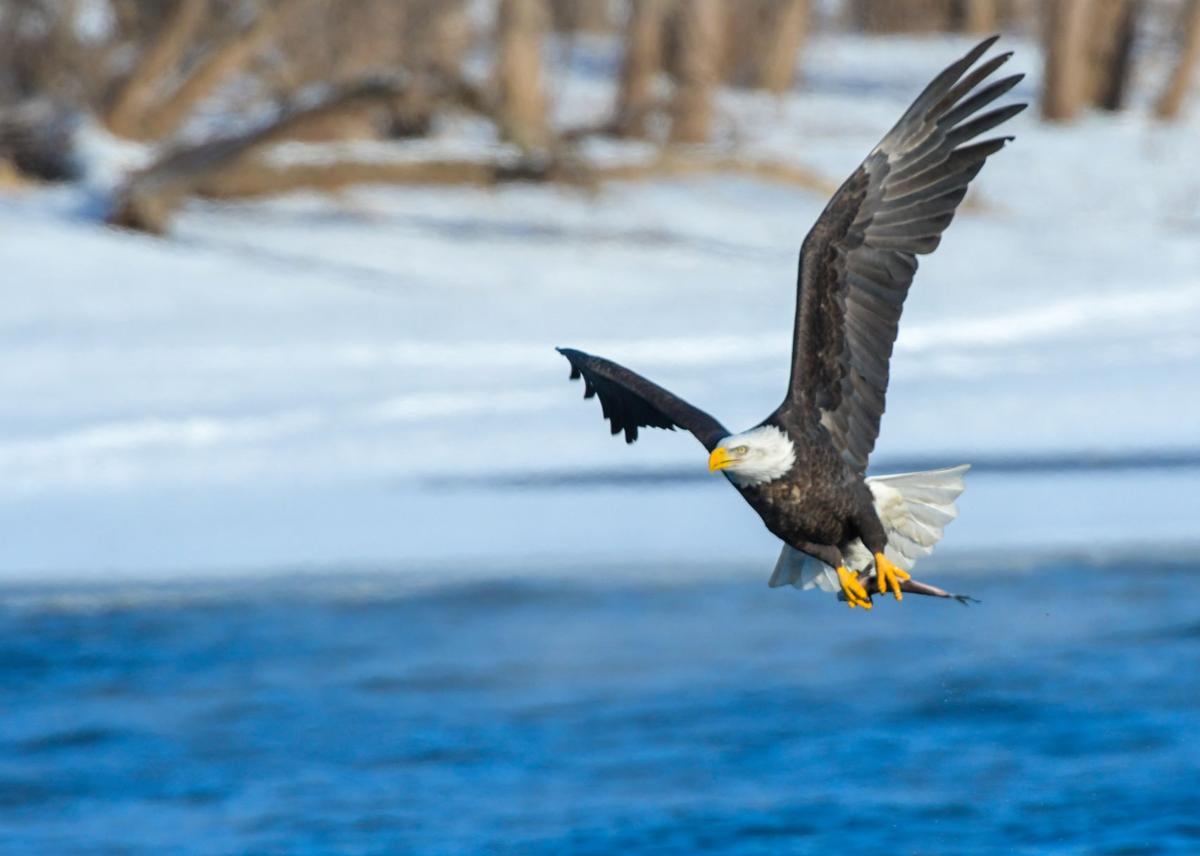 A mature bald eagle lifts off after snatching a fish from the Minnesota River.    Photo by Mark Morrison 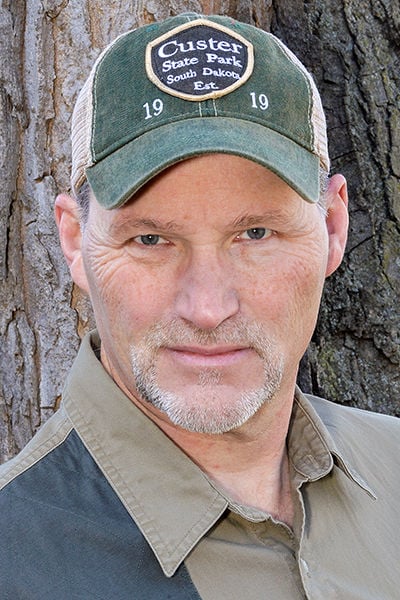 A mature bald eagle lifts off after snatching a fish from the Minnesota River.    Photo by Mark Morrison

A few Saturdays ago, I awoke to temps that hovered at minus -8 degrees.

My truck, and everything else, was covered in thick, glistening frost crystals, and the sun peeked over the eastern horizon, flanked by bright, iridescent sun-dogs. It was darn cold.

To me, the conditions were ideal to find and photograph one of my favorite subjects: bald eagles.

When sluggish winter rivers are exposed to sub-zero temperatures, they freeze over, except in areas of heavy current or warm-water discharges. This will concentrate the big birds, who are expert at plucking fish from open water, such as the confluence of the Blue Earth and Minnesota rivers at Sibley Park.

I drove into the park from the east and was surprised to spot an immature eagle perched in a towering oak, adjacent to the road. The bird remained unusually calm and intently gazed out onto the river ice as I snapped off frame after frame.

I was curious as to what could hold the bird’s attention so unwaveringly. Swinging the big 500mm lens on to the river, I got my answer. An obviously wounded Canada goose was stranded on rough ice, and the enterprising, patient eagle was waiting for it to lose its battle against hunger and cold before swooping down to devour it.

Panning my lens farther west revealed another 10 eagles perched across the river in high cottonwoods, waiting to share or steal the eventual meal from their counterparts. The apparent cruelty of Mother Nature would end the goose’s life and conversely provide an easy and welcome meal for the raptors.

Hustling down the river bank, I took an impromptu stand in a thick copse of willows and waited. Sure enough, the eagles left their roosts and soared above the doomed goose, their flights taking them very near the fish appetizer-laden open water rivulet near me. After two hours, I had accumulated many images, and was frozen nearly in place before I ended the session and hiked backed to the warmth of the truck.

Just thirty years ago, a scene like this would have been rare as there were few eagles inhabiting the Minnesota River valley. In the 1970s, eagle numbers were exponentially lower than they are today. Thus, the iconic symbols of America were placed on the Endangered Species Act.

Eagles are so adept at catching fish that their success rate is high and is a significant part of their diet. Before its ban, DDT that made its way into waterways contaminated fish and then worked up the food chain when bald eagles ingested the contaminated fish.

DDT didn’t lead to a rapid decline of eagles because it killed adults. Rather, the substance hindered the ability of eagles to produce solid eggshells, and DDT-affected eggshells became so thin they fractured long before incubation could be completed. Thankfully, with the DDT ban in place, eagles made a roaring comeback and were delisted from the Endangered Species Act in 2007.

It’s important to note that Minnesota’s non-game donation check-off on tax forms has truly helped in the eagles’ recovery from low numbers. Over the past four decades, these check-offs pumped much needed money into eagle research and public education.

Without a doubt, the best place to see these dollars at work and absorb eagle knowledge is the National Eagle Center in Wabasha. Besides viewing live captive bald eagles, you can learn how eagles are opportunistic feeders on a deer carcass, even if it lies adjacent to a busy highway. Many birds are injured or killed as they lift off carrion and are hit by vehicles.

Drivers are advised to slow down and be prepared for this, as eagles have no inherent fear of cars.

Folks can also learn the difference between immature bald eagles and their close cousins, golden eagles. It’s a common mistake to confuse the species as young eagles have feathers similarly white-flecked like golden eagles and don’t feature the brilliant white head and tail of mature bald eagles. It takes five years for a bald eagle to develop the signature white head and tail we know so well.

The best way to differentiate the species is by the legs. Immature bald eagles have bare, yellow legs, while goldens’ legs are covered by feathers. Also, a golden eagle’s beak is normally much darker, showing little yellow compared to the bright beak of a bald eagle.

This is the perfect time of year to search for eagles. Birds that spent winter farther south will stop off in southern Minnesota at open water areas on their travel north.

The best places to see eagles? Near Mankato, the Judson bottom road and the scenic Henderson roads are excellent. Dozens of birds can be seen when ice retreats from rivers and ponds in both areas.

Further east, a drive from Wabasha north to Red Wing along the Mississippi river will results in countless sightings. Many times, birders are treated to mating rituals high in the sky where eagles lock talons and fall for hundreds of feet before releasing and soaring on strong winds among the lofty river bluffs.

Most of us hope for an early spring. But a protracted thaw can present the ideal time frame to get out and enjoy iconic eagles as they soar over the Minnesota River valley.

Mark Morrison is an avid hunter and fisherman who has been a freelance outdoors writer and photographer for 21 years. He’s been a Mankato resident since 1979.