In Mankato, if you were hoping for funding to stop the main source of drinking water from being overwhelmed by flooding on the Minnesota River, you’re up a creek without a paddle.

If you’re wondering why these projects are not happening, ask House GOP Minority Leader Kurt Daudt and your local GOP legislators who voted against bonding in a political effort to get Gov. Tim Walz to relinquish some of his constitutionally granted emergency powers.

The House vote was 75-57, six votes short of the super majority needed. 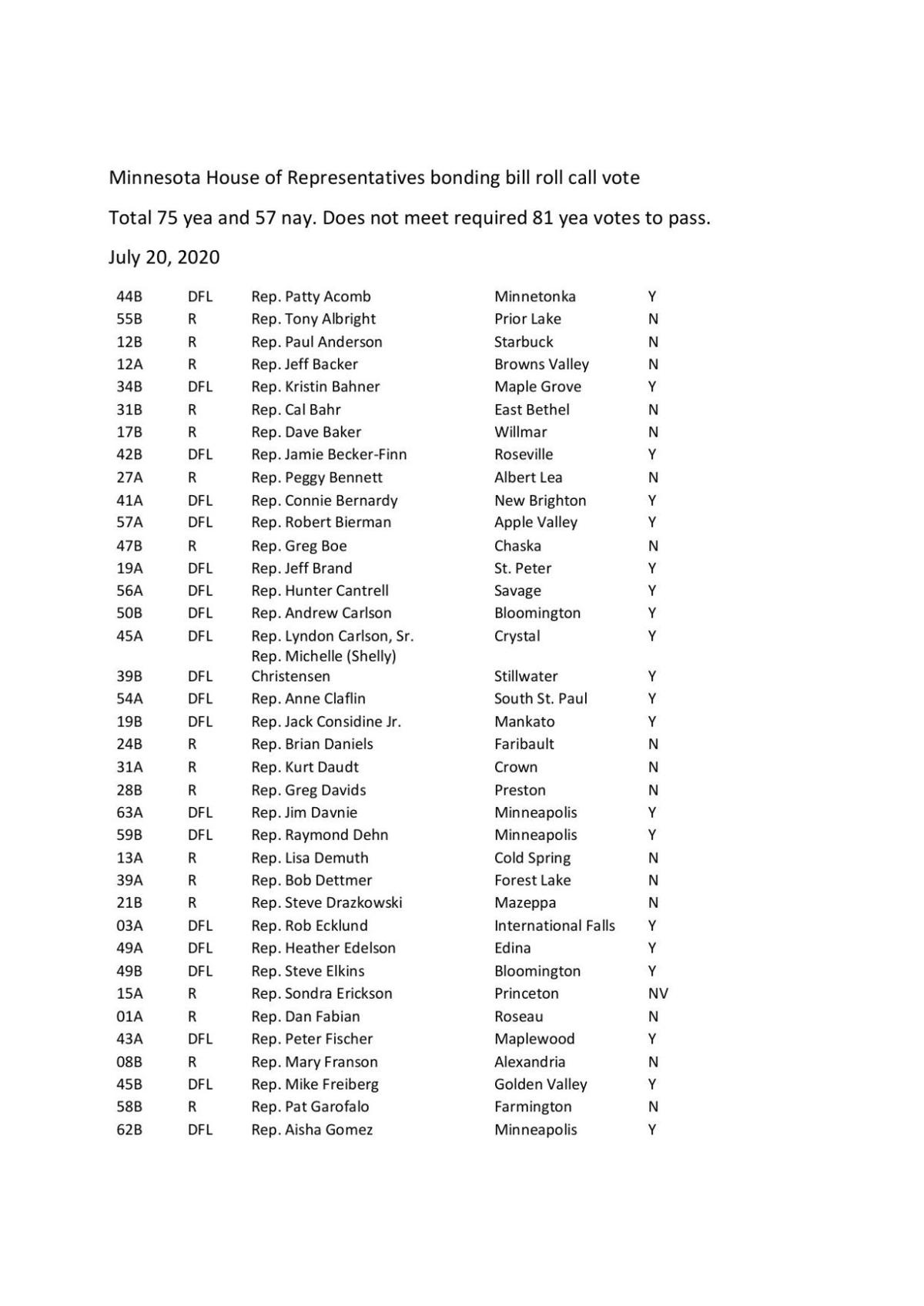 Even other Republicans in the Senate couldn’t swallow Daudt’s strategy. They mostly supported a bill that included $1.35 billion in general obligation bonds, $300 million in trunk highway bonds and $147 million in appropriation bonds, including $100 million for affordable housing.

Walz himself detailed his numerous compromise offers to Daudt in a letter issued Tuesday. Walz noted in the letter that he was willing to relinquish some, but not all, of his emergency powers. That apparently wasn’t good enough for Daudt, who seems bent on playing out a political narrative that put politics ahead of the needs of Minnesotans. 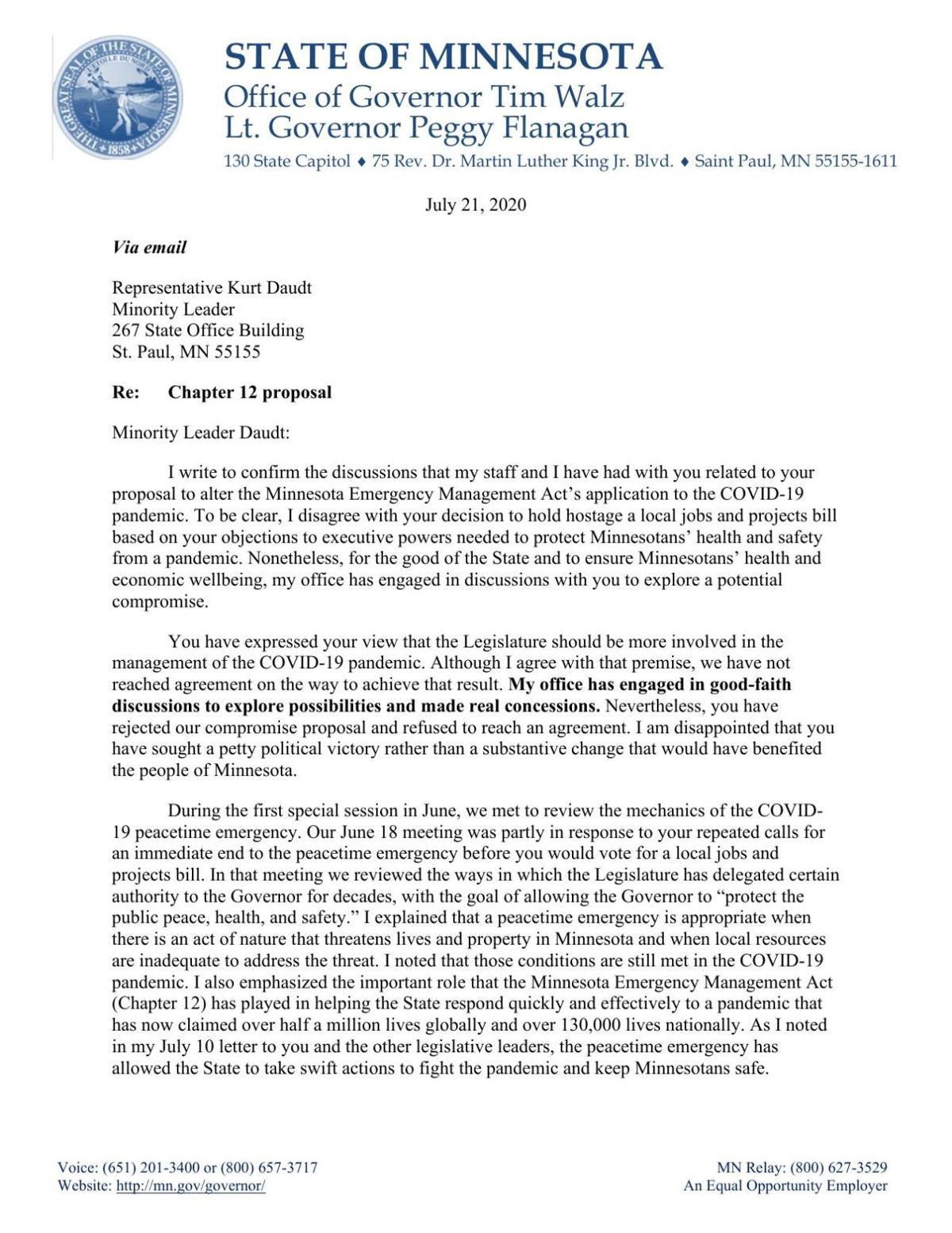 While it’s said compromise falls to both parties, 90 percent of the blame for the bonding bill’s failure should fall to House Republicans, who include Rep. Jeremy Munson of Lake Crystal, Rep. Paul Torkelson of Hanska and Rep. John Petersburg of Waseca.

The bill contained $15 million for flood hazard mitigation money for Waseca and Owatonna in Petersburg’s district.

Other local projects that will not happen anytime soon in Munson’s district include $8 million for the city of Vernon Center to renovate its water tower, replace its wastewater plant and improve its sewer system and $900,000 for the city of Waldorf to continue its water treatment plant improvements.

The bill also included $300,000 for the German Park Amphitheater in New Ulm, where Torkelson is the representative.

Munson said he didn’t vote for the bill because it included provisions for using the Health Care Access Fund that he believes would have raised health care premiums for private insurance. Torkelson pointed to what he said were “poison pill” provisions put in by Democrats that he said funded “expensive” commuter trains and transit.

We challenge these representatives to make those arguments to their constituents. Bonding bills are compromises, and there will always be projects some don’t like.

Now, for the second year in a row, there is no bonding bill.

And now it appears there will be no chance for a bonding bill when the governor calls another special session because it will be at the same time other general obligation bonds are being sold. Financial experts say such actions rattle markets in the middle of a bond sale.

So Minnesotans, especially those in outstate, who have been waiting years for their projects will likely have to wait longer. And the project costs will grow.

The one solution Minnesotans have at their disposal to get their projects done would be to remove the remaining obstacles to bonding – those members of the House GOP minority who would rather vote politics than projects.

Minnesota infrastructure projects have been delayed for three years now.