Buying hotels falls outside the basic services government should provide, but an unusual deal between North Mankato and owners of the ailing Norwood Inn hotel may be an opportunity to serve a public need for workforce housing.

The city, through its Port Authority, entered into a deal last week to eventually own the Norwood Inn after it begins collecting payments from HyLife Foods of Windom. HyLife plans to house 150 to 200 workers at the site, busing them to Windom each day to work at the company’s pork production plant.

HyLife signed a lease for the Norwood Inn with building owner Twin Cities Lodging late last year, then approached the city to get zoning approvals. But the hotel was not zoned to allow for worker housing seven days a week. When HyLife said it could use the hotel six days a week to comply with zoning and house the workers another place for one day, the city said that wouldn’t be a good situation for the company or the city.

Ultimately the city agreed to waive $5,000 a week zoning fines and the company agreed to pay the city $13,333 per month in lieu of local lodging taxes.

The plan calls for HyLife to take ownership of the property per its lease option to buy and within 140 days turn the property over to North Mankato for $3.25 million. Harrenstein said the city would borrow $4.25 million, leaving $1 million for renovating the property. Twin Cities Lodging had been offering the property for sale at $4 million. 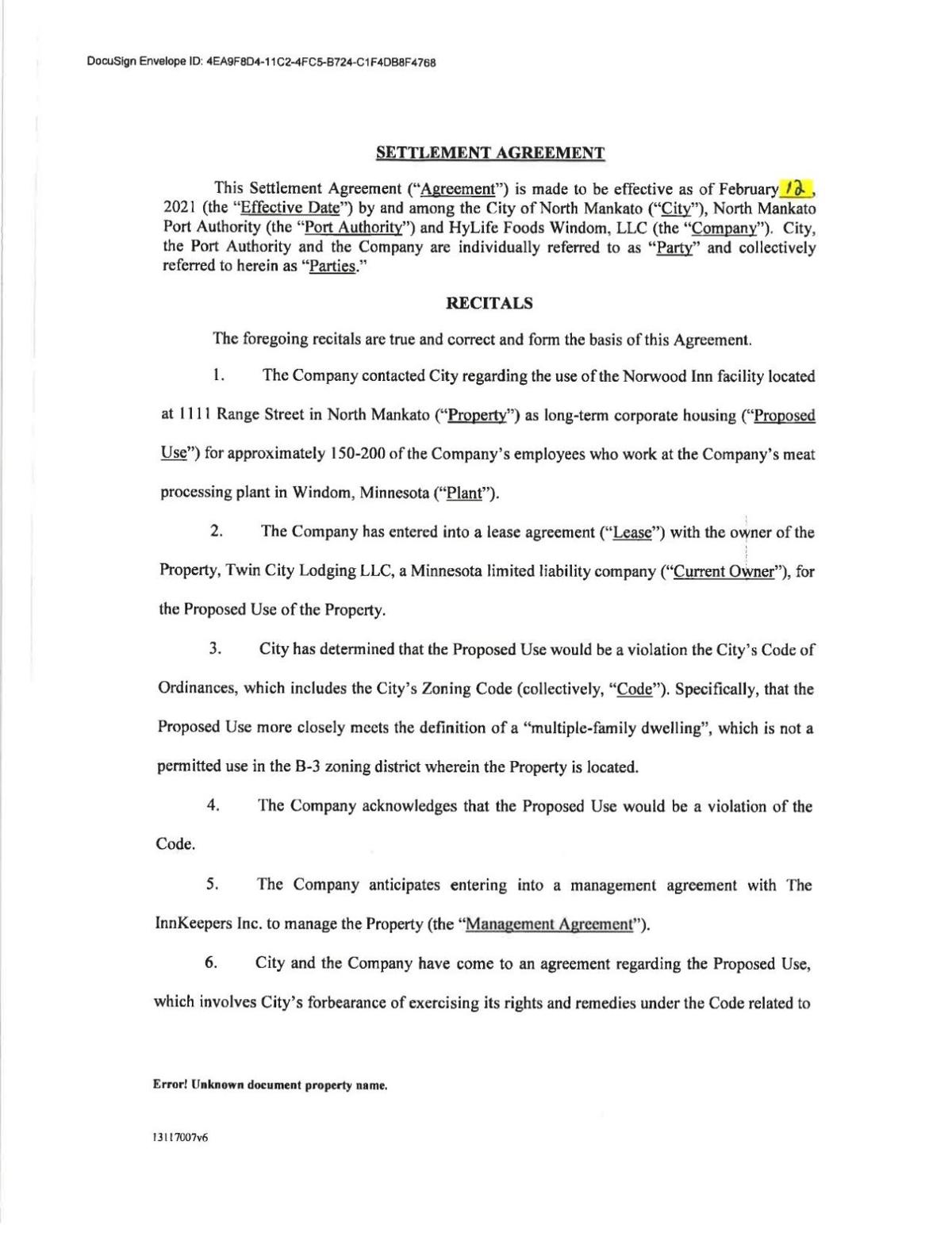 HyLife also will pay 37,500 per month rent to North Mankato.

Harrenstein said the city would attempt to resell the prime location property to another developer, sell it to another hotel operator or re-franchise through a hotel management company. Harrenstein said the monthly HyLife payments to the city will more than cover the debt service on the city purchase for two years, and he said he expected no impact on North Mankato taxpayers.

But there’s plenty of risk here for North Mankato taxpayers and the city. The pandemic has killed 80 percent of hotel business in the region. While one can expect somewhat of a rebound at some point, a pandemic weary public might forego travel and hotel stays.

And there will be plenty of competition in the region. There are plans for a new Hilton Home2 Suites extended stay hotel at the site of the old Mankato Post Office.

As a course of business, city development arms have been involved in selling property for redevelopment. That is probably the best option here. The hotel sits on a prime location.

The biggest plus comes from use of an aging hotel for workforce housing that is badly needed in rural Minnesota and in the pork industry. Agriculture and pork processing are big parts of the regional economy. The workers will be from Mexico, Dominican Republic and Puerto Rico and will have their required work visas.

HyLife, a Canadian company, bought 75 percent of Prime Pork in Windom from longtime Mankato businessman Glen Taylor in 2020. The company processes 1.2 million hogs per year. Taylor founded Comfrey Farms Prime Pork in 2016 to take the place of a shutdown beef packing plant in Windom. It employs about 650 people.

So North Mankato can play a role in supporting rebounding pork processing in southern Minnesota, and, with luck, redevelop a deteriorating property.

It’s a riskier-than-usual proposition for a municipality and may strain prudence, but the payoff could also be significant. 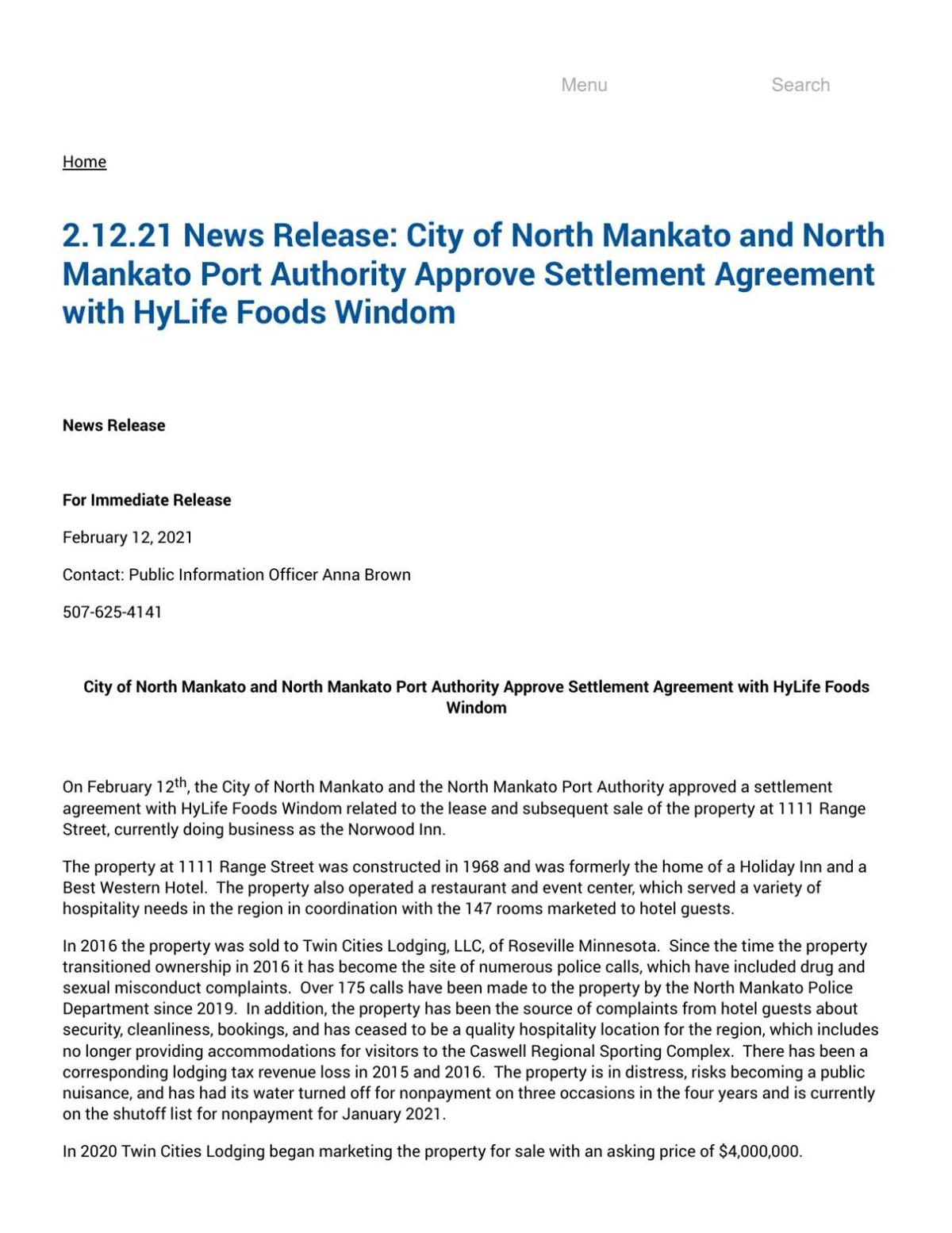 An unusual involvement in a hotel development could pose risks for North Mankato, but the project also appears to serve a need for workforce housing.