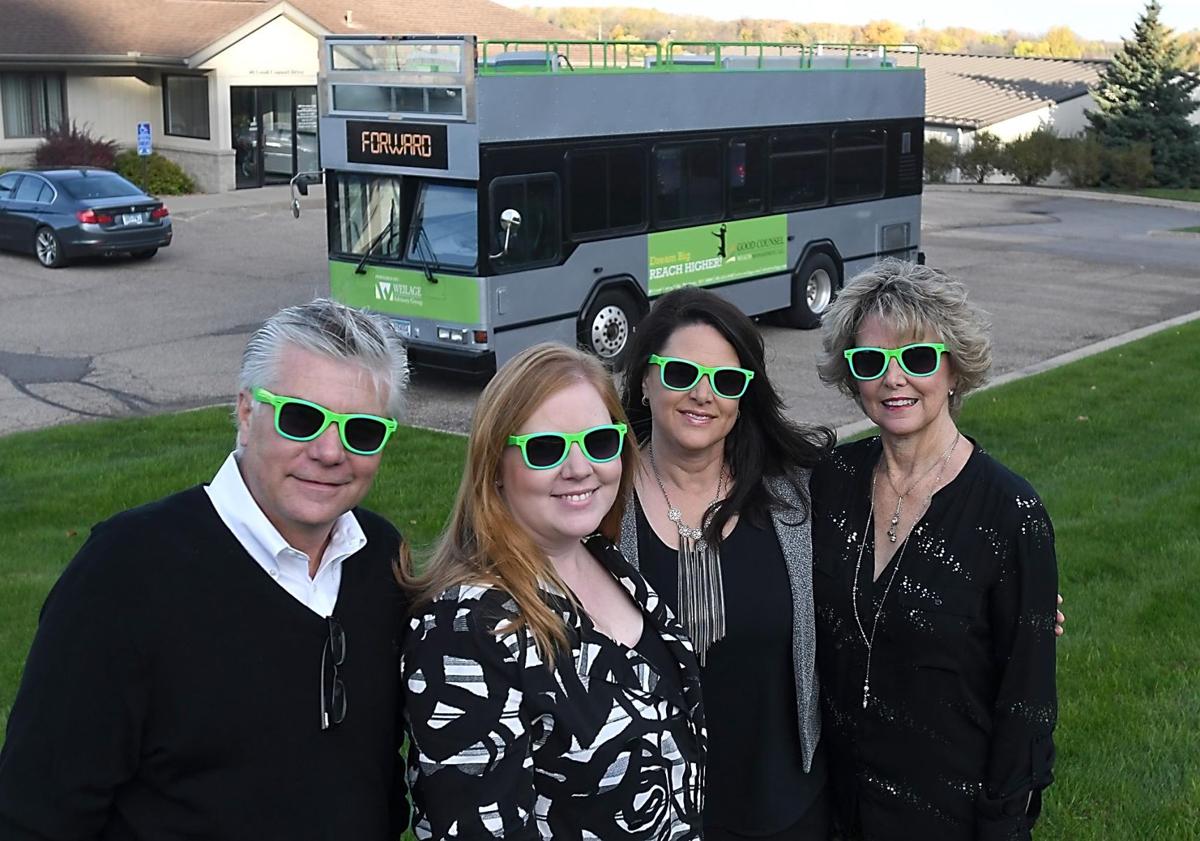 A few members of the Weilage Advisory Group pose with the newly refurbished doubledecker bus that will be used during the Mankato Marathon on Sunday. From left to right are owner Scott Weilage, Leah Meyers, Teri Kratz and Kathy Langdon. Photo by Pat Christman 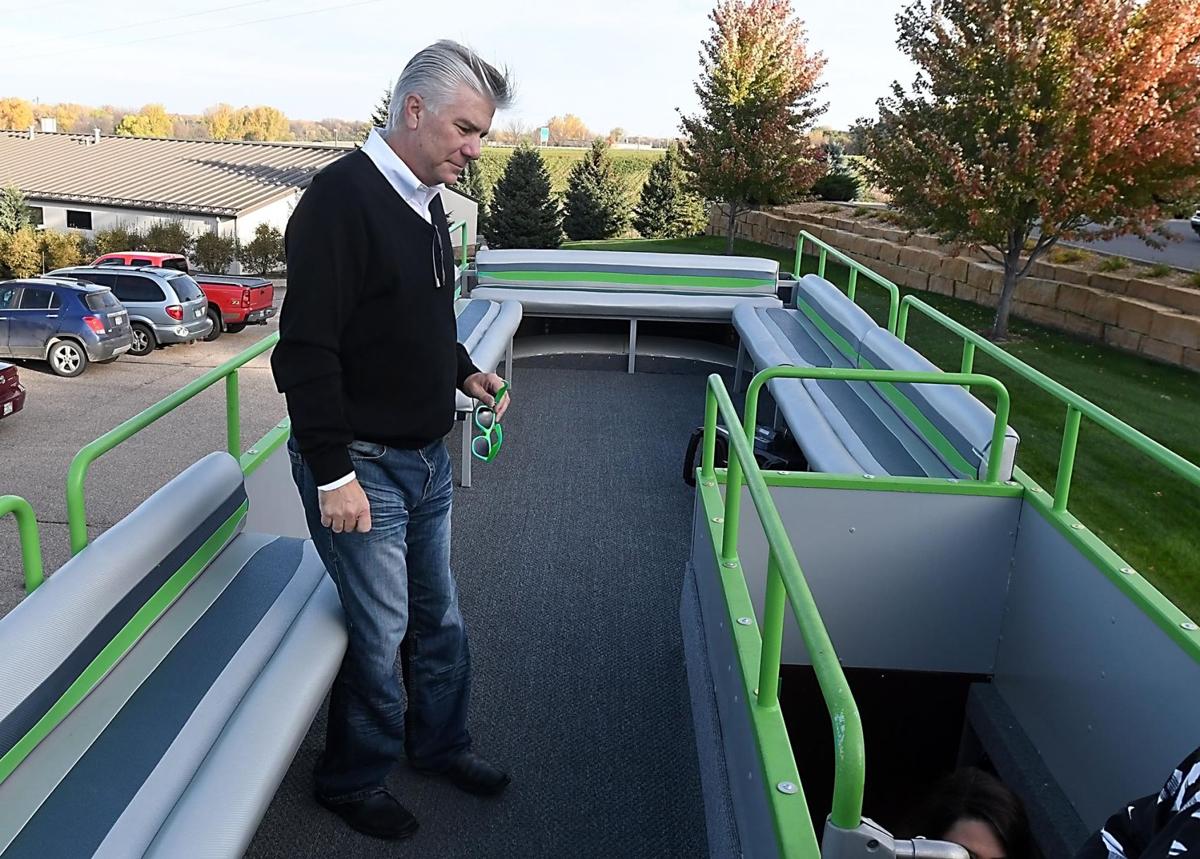 Scott Weilage checks out the Sky Lounge on his newly acquired doubledecker, which he plans to use for charitable purposes and community events. Photo by Pat Christman

A few members of the Weilage Advisory Group pose with the newly refurbished doubledecker bus that will be used during the Mankato Marathon on Sunday. From left to right are owner Scott Weilage, Leah Meyers, Teri Kratz and Kathy Langdon. Photo by Pat Christman

Scott Weilage checks out the Sky Lounge on his newly acquired doubledecker, which he plans to use for charitable purposes and community events. Photo by Pat Christman

Scott Weilage is an idea man.

He came up with a doozy a few years ago, and Sunday, during the final stages of the Mankato Marathon, runners and spectators will experience the benefits.

Weilage, the proprietor of the Weilage Advisory Group in Mankato, has long been a supporter of non-profits and charities in the area. Like any business, he can stretch his budget only so far when it comes to contributions and that became a source of consternation for him.

That’s when the brainstorm hit.

“I was tired of saying ‘no’ to non-profits and charities,” he said. “I had this idea that I thought would be a great way to say ‘yes.’ That’s how the whole thing started.”

In 2014, he went to a bus broker in Pennsylvania, and they told him the Rochester City Line right in Minnesota might be able to help. They had exactly the kind of bus he was looking for, but it had already been sold.

During this process, he stumbled across J. Krass Welding in Owatonna that specializes in converting regular buses to doubledecker buses. With that in mind, Weilage set out to buy a regular bus and convert it.

At that point, although he had never bought anything on eBay before, he got on the website and started looking.

“One night, after a glass of Chardonnay — I promise, it was only one — I found exactly what I wanted,” he said. “The auction was going to expire at 11 p.m. At 10 p.m., I submitted my bid and went to bed thinking there was no way I would win.

“The next morning I woke up and owned a bus. It was located in Portland, Oregon, and owned by a guy who lived in Hawaii. His brother was storing it for him.”

Weilage arranged for friends Britt and Nicole McGill, from McGill Trucking out of Mapleton, to go to Portland and bring the bus back. Weilage dreaded the phone call from Portland, wondering what the couple would find when they got there, but it was all good news.

“It’s a 1995 Gillig bus, and it had only 60,000 miles on it,” he said. “It was in excellent shape mechanically, just like it had been described on eBay. There was a small electrical problem that had to be taken care of and then they drove it back.”

Upon arrival, he dropped it off in Owatonna for the conversion. All the windows were removed and the entire top of the bus was cut off.

Once the conversion was complete, Weilage arranged for the upholstery and painting, and the whole project was completed last spring.

Flash back to a year-and-a-half ago. Weilage was having a conversation with Mankato Sports Commission director Chris Willaert, who oversees the Mankato Marathon.

“Scott was saying he had this crazy idea for the marathon, and I said spill it,” Willaert said. “He told me about the bus and thought it would make a great cheer zone for the marathon.

“I looked at him and said ‘that’s not crazy, that’s genius.’ We found the perfect spot at the end of front street where that last little hill is before the runners get to the finish line.”

Weilage’s plans are to traipse the bus in banners and put a guitar player up on the Sky Lounge, as he likes to call it, to play music as the runners come by. Everybody else will cheer encouragement as the participants hit the final stretch.

“That’s not a big hill, but it’s a killer when you’ve already run 26 miles,” Weilage said. “I know because I ran the half-marathon last year.”

The bus has already been used a few times, including appearing in parades at Bullhead Days in Waterville, the 4th of July parade for the Performing Arts Center in St. Peter and Paddlefish Days in Madison Lake. It was also parked at the annual Solstice festival in West Sibley Park and used as a VIP area for spectators.

Weilage says the whole idea is an attempt to Pay it Forward. He’s still looking for volunteer drivers for various events, and he’d like to find a more permanent home for the bus in Mankato. The bus is 30 feet long and 14 feet high.

“The response from the community has been great.” Weilage said. “The Children’s Science Museum was able to house it for awhile, and now it’s being housed over in Courtland.

“There are so many business and groups and individuals who have come on board to help out. I’m a big Mankato guy, and the people here are really getting behind this.”

Fundraising and charity work aside, Weilage admits he has an ulterior motive for purchasing the bus.

“I’m halfway to getting my CDL License. I want to be a bus driver.”