Avery Stilwell joined the Minnesota State women’s hockey program after all three of the team’s goaltenders were out with injuries. Stilwell stopped 84 of 99 shots against Ohio State over the weekend. 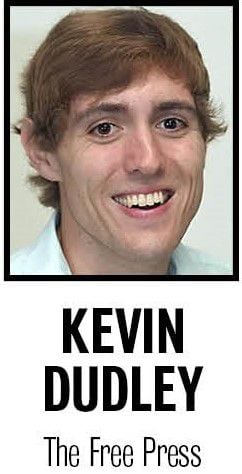 Avery Stilwell thought her career as a goaltender was over.

She finished her senior season at Litchfield/Dassel-Cokato in March, and was headed to Minnesota State to play tennis.

Stilwell considered playing college hockey but decided tennis would be the better route, a decision that was very difficult but one she was at peace with.

Turns out, hockey wasn’t quite done with Stilwell.

When the most improbable opportunity to put her beloved goaltending gear back on presented itself, she couldn’t say no.

Barbro found out she needed season-ending surgery prior to the team’s Nov. 5-6 series at St. Cloud State. Then, during the series against the Huskies, both Frank and Kelley ended up sustaining injuries in Game 2.

The Mavericks had a bye week following the series against St. Cloud, but MSU coach John Harrington knew the club needed help.

You can’t practice without a goaltender, so Harrington had to look to the student body.

That’s when Stilwell’s name came up.

Several of MSU’s players had been to camps with her in high school and told Harrington she was pretty good.

After hearing Harrington’s pitch and talking with MSU tennis coach Ryan Kucera, Stilwell was 100% in.

“I was extremely excited and extremely nervous almost immediately,” Stilwell said. “I really wanted to have this opportunity because I liked hockey, and I considered playing it in college. ... For me, it was for sure I wanted to do it.”

But Harrington’s pitch never involved playing in a game.

In fact, with the bye week, Harrington expected to have Frank back for the team’s Nov. 19-20 series at Ohio State. A transfer from Penn State was set to join the Mavericks after the holiday break to fill in for Barbro, so Stilwell’s role was purely that of a short-term backup.

Then she would resume tennis full-time.

The day before the Mavericks opened the Ohio State series, Frank wasn’t cleared to play.

Not only was Stilwell going to play, but it was going to come just six days after her first practice with the team.

And it was going to come against the No. 2-ranked team in the country.

“I was a little overwhelmed,” Stilwell said. “(Harrington) told me and I laughed ... I hadn’t played hockey since my (high school) season ended. I hadn’t touched the ice since then.

“I set my goals pretty low, just to focus on having fun and enjoying it. I think I said I didn’t want to let in any (more) than 10 goals; I think my mom said we’ll be good with anything less than 20.”

How does six sound?

In an amazing Game 1 performance, Stilwell was peppered with 51 shots and made 45 saves, keeping the Mavericks in the game in a 6-3 loss.

For her efforts, Stilwell received votes for the WCHA’s Goaltender of the Week award.

“I really don’t know how — I don’t. I was even surprised with myself by how I was doing,” Stilwell said with a laugh. “My mechanics weren’t anywhere where I wanted them to be. ... I really just focused on going all out for every puck and doing everything I could to just keep it out of the net.

“It was just a really great feeling to be able to perform like that in a situation like that.”

The Mavericks have another bye week this week, so this might be the only game action Stilwell gets in her short time with the hockey program.

That doesn’t minimize the amazing accomplishment.

It took a lot of courage to stand between the pipes against a team like the Buckeyes, especially with basically no practice time.

Stilwell got to have the college hockey experience she wanted and played like she belonged.

“It was quite the privilege for me to have one more shot at it,” Stilwell said. “(Just) being able to add to my hockey experiences.”