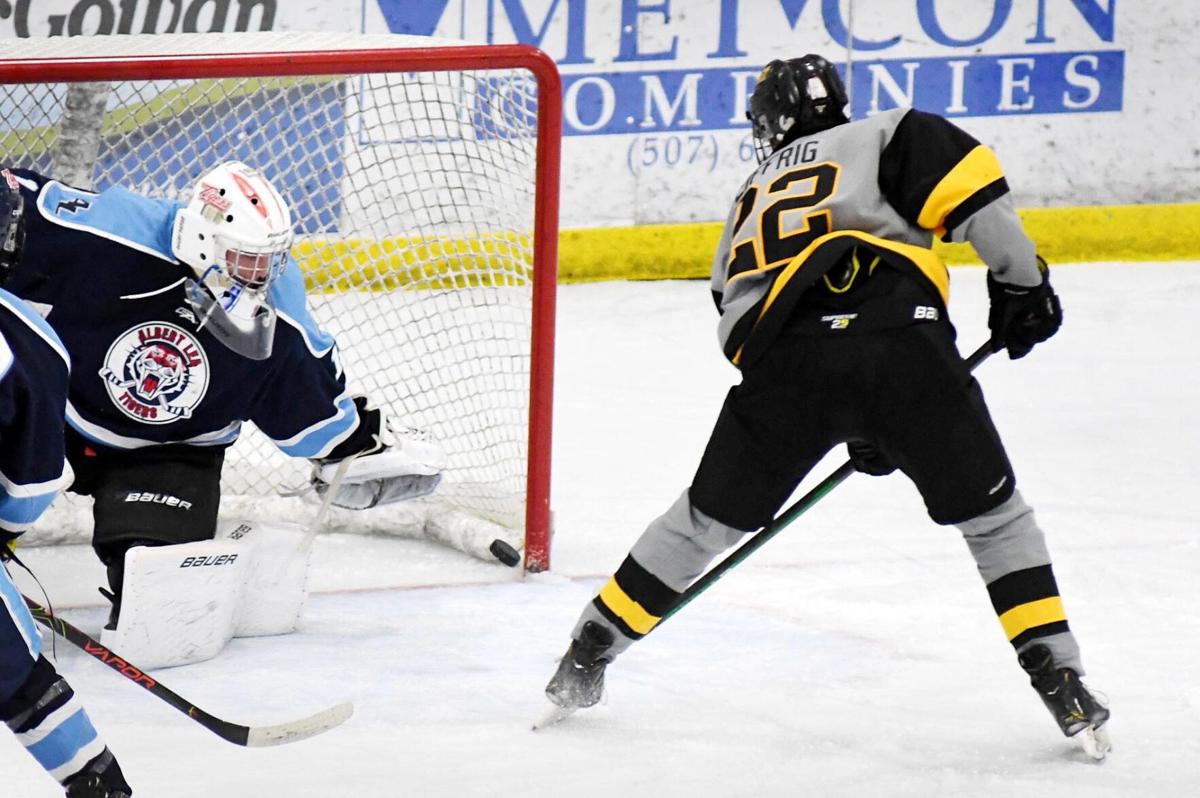 Mankato East’s Layton Liffrig gets the puck past Albert Lea goalie Dakota Jahnke to score at 16:49 in the second period Saturday at All Seasons Arena. 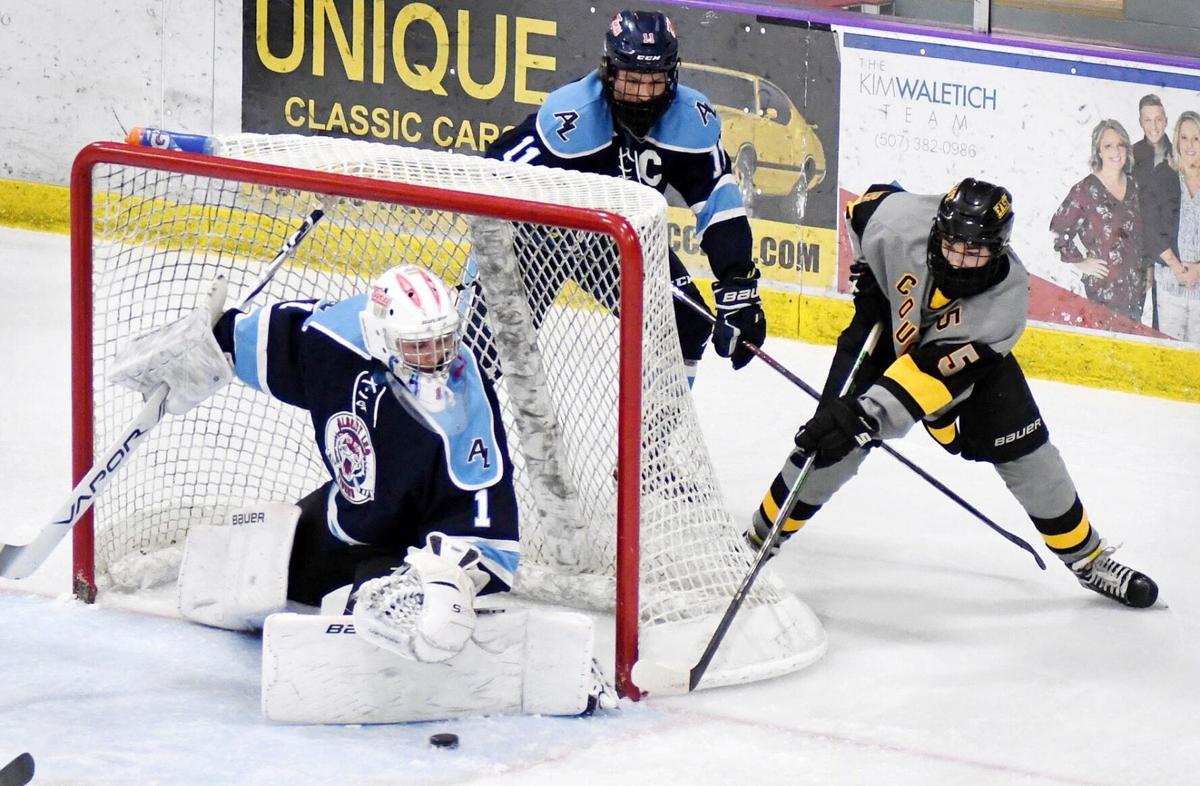 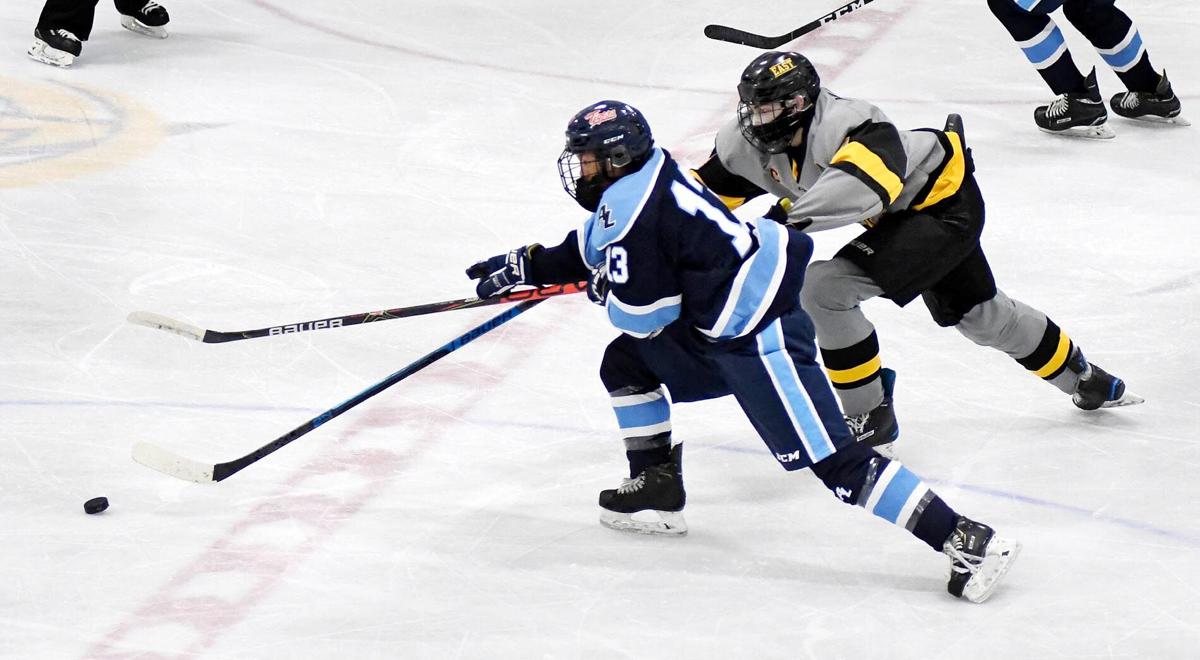 Mankato East’s Ian Mueller and Albert Lea’s Joseph Yoon race for the puck at center ice during the first period of Saturday’s game at All Seasons Arena.

Mankato East’s Layton Liffrig gets the puck past Albert Lea goalie Dakota Jahnke to score at 16:49 in the second period Saturday at All Seasons Arena.

Mankato East’s Ian Mueller and Albert Lea’s Joseph Yoon race for the puck at center ice during the first period of Saturday’s game at All Seasons Arena.

There are banners hanging above the ice at All Seasons Arena to remember Big Nine Conference championships for the Mankato West boys hockey team.

There are also banners for conference championships won by the Mankato East/Loyola and West girls teams.

But sometime soon, there will be another banner to commemorate the Cougars’ boys championship in 2021.

“It means everything to us,” East/Loyola senior Jacob Schreiber said. “We have guys who have been working for four years to achieve this goal. It’s awesome.”

Schreiber and Layten Liffrig each scored two goals as the Cougars (14-4) defeated Albert Lea 7-0 in a Big Nine game at All Seasons Arena.

It’s the first conference title in program history, with all the lines scoring and the defense allowing just 10 shots on goal.

“This is something really special,” East/Loyola coach Adam Fries said. “It’s not easy to win this conference. But we have a checklist every year, and the first one you can check off is a conference championship.”

Schreiber scored the only goals of the first period. At 4:35, he took a pass from the corner by Liffrig and fired it into the open net. Brett Borchardt also got an assist.

A little more than three minutes later, Schreiber took a pass from Zach Lebens in front of the net and scored again. Liffrig had the other assist.

“My linemates were working hard and got me the puck,” Schreiber said. “(Those goals) really got the morale up and the energy up, and the boys were buzzing after that.”

The Cougars had a five-minute power play midway through the second period, and Liffrig made it hurt, scoring on a sharp angle from the right circle. Borchardt and Aiden Prochaska got the assists.

East/Loyola won a faceoff with 26 seconds remaining in the second period, and Liffrig skated the length of the ice, cutting in front of the net and scoring with just 11 seconds on the clock for a 4-0 lead. Schreiber and Lebens assisted on the goal.

The lead grew to 5-0 at 3:47 of the third period when Hayden Guillemette grabbed the puck from a crowd just above the left circle and fired a shot into the upper-right corner of the net, assisted by Quintin Steindl.

It became 6-0 when a shot from Shae Gavin deflected off Andrew Bastian and into the net. With Bastian’s goal, every player on the East/Loyola roster has scored this season.

Parker Anthony added a power-play goal, assisted by Gavin and Steindl, with three minutes remaining to make it 7-0.

Riley Burnett made 10 saves for his fifth shutout in nine starts.

“This was the most we’ve been relaxed, and our focus was at a level we haven’t seen this year,” Fries said. “Only (10 shots) on goal, that shows it was complete domination. That’s the first 51-minute game we’ve played all year, and it was a great time to do it. It was a statement.”

Saturday’s game nearly didn’t get played. East/Loyola played Rochester Mayo on Thursday, and early today, Fries said that he found out Mayo was shutting down its program because of positive COVID-19 tests. Mayo cancelled Saturday’s home game against Mankato West.

“We wanted to finish this off, and if it was going to be our last game, make it one that everyone would remember,” Fries said. “We’ve done all the protocols, and I have complete confidence we’ll get through this.”

The Section 1A seedings will be released Sunday, with East/Loyola’s first game on Thursday.

“We were all pumped up after the game,” Schreiber said. “We just have to bring the energy like we did tonight.”