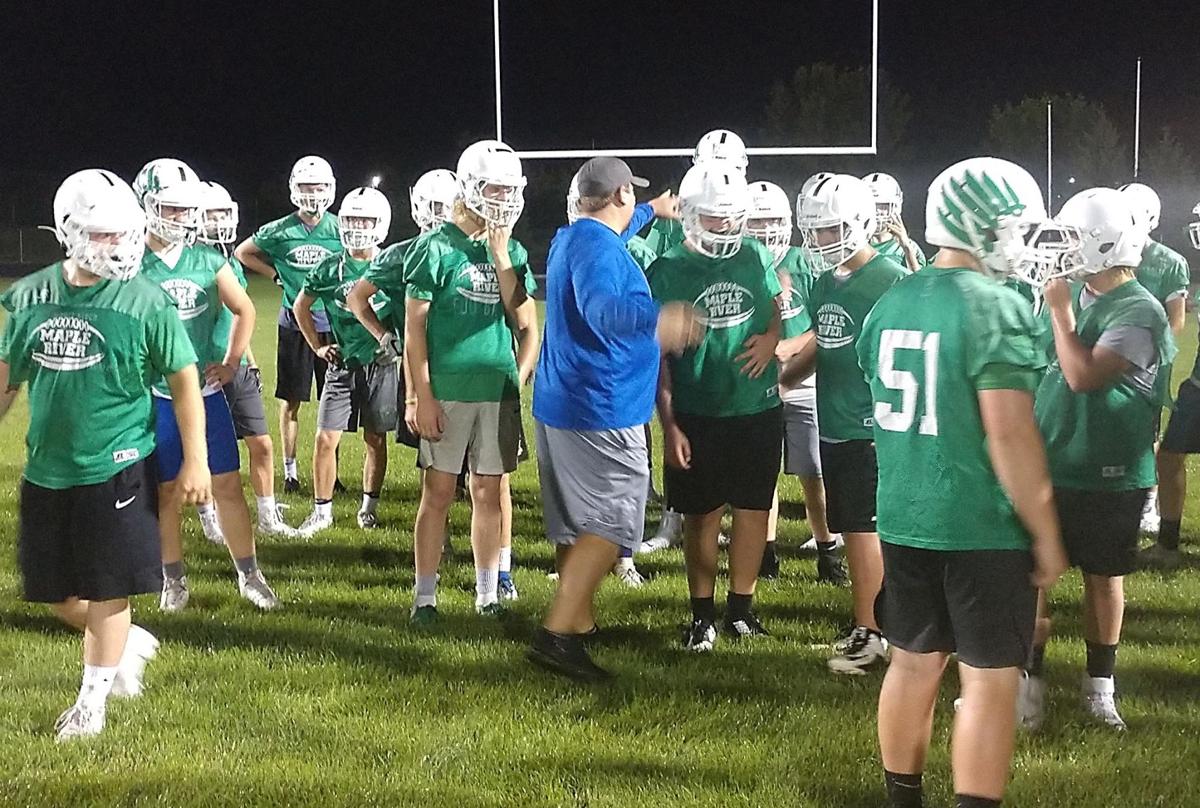 Maple River football coach Dusty Drager (center) teaches some tackling techniques during a midnight practice on Monday at the field in Mapleton. 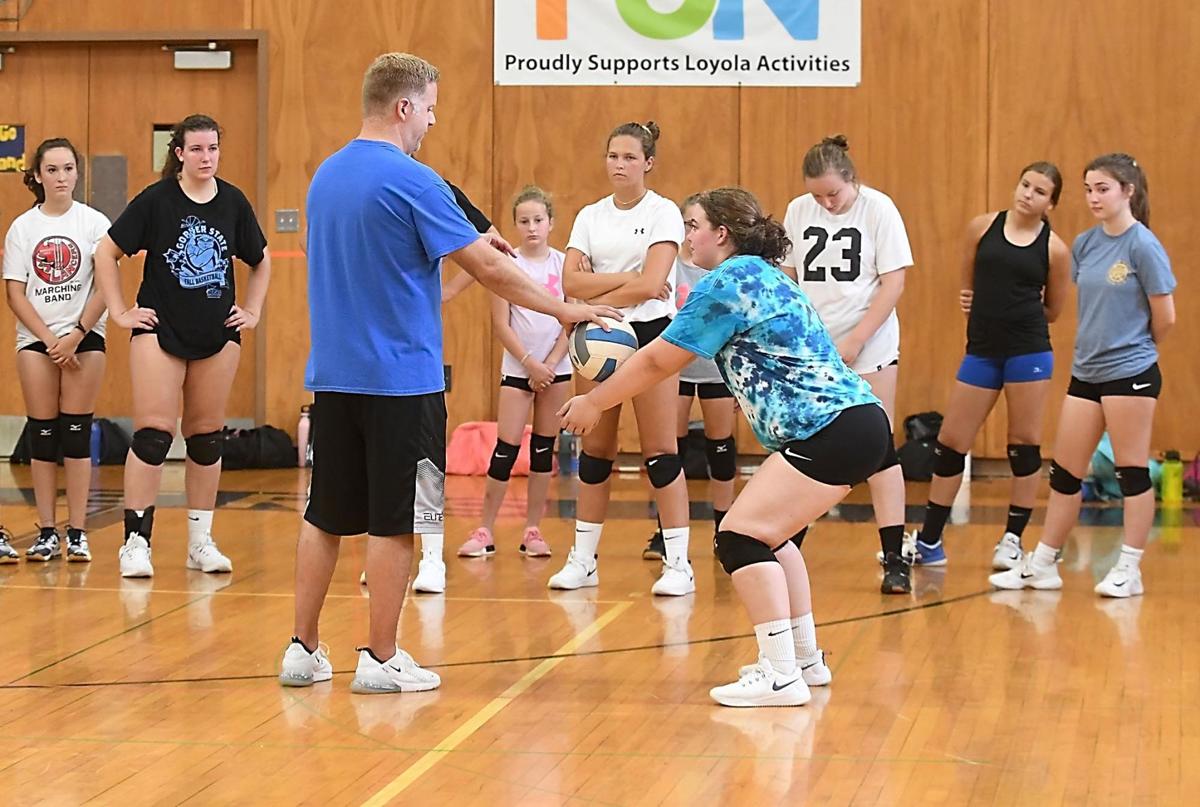 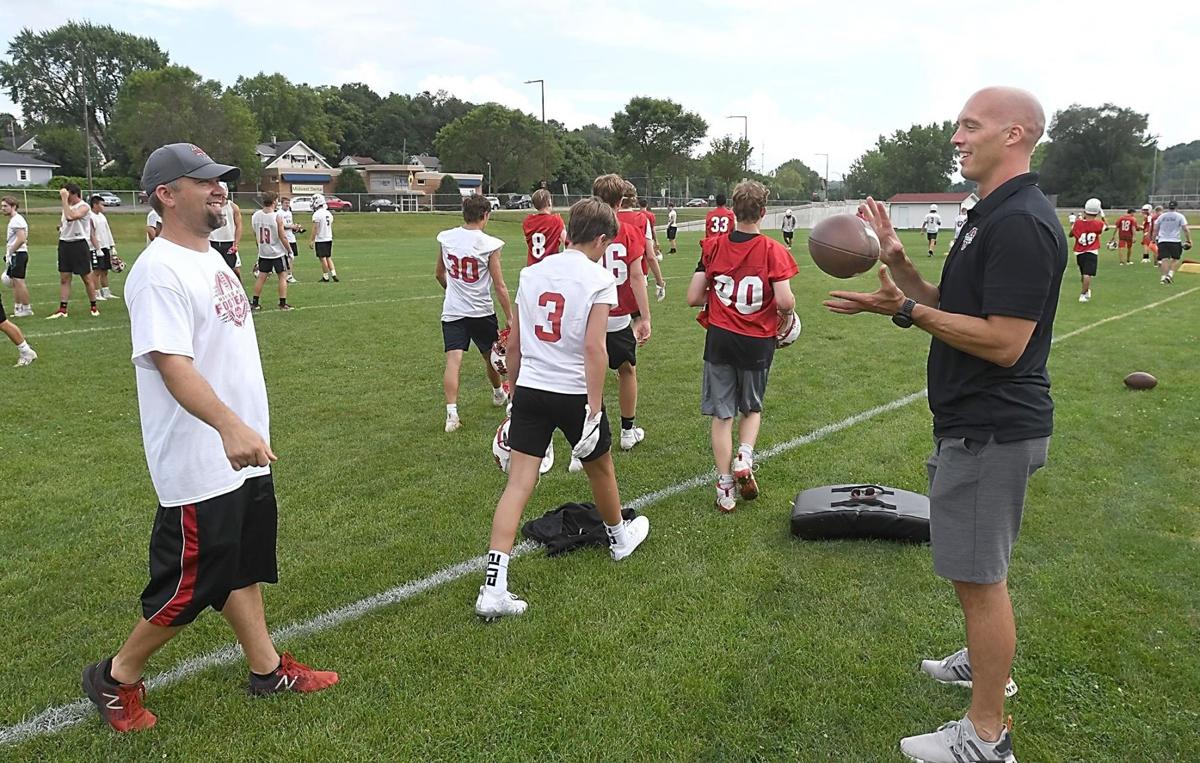 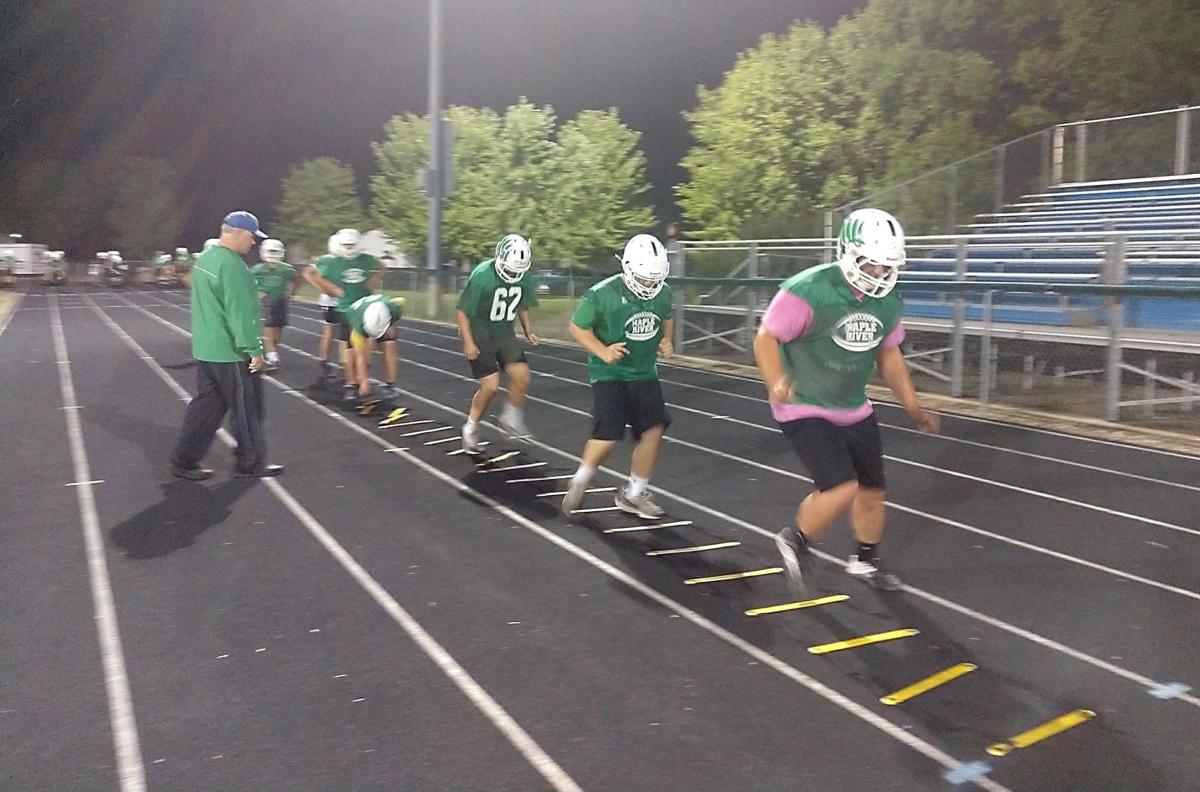 Maple River football coach Dusty Drager (center) teaches some tackling techniques during a midnight practice on Monday at the field in Mapleton.

The field lights were visible from a few miles away, drawing out-of-towners and locals to this event, where Friday Night Lights met Midnight Madness.

One by one, cars pulled into the parking lot, some driven by athletes and others by parents who stayed up late to get their boys to practice and surely were happy to return in a couple of hours for pick up.

It was the first football practice at Maple River, where starting the season early had new meaning. At 12:01 a.m. Monday, the Eagles were on the field in Mapleton, dressed in green jerseys and white helmets and serenaded by some AC/DC music.

“This is the second year we’ve done this,” Maple River coach Dusty Drager said. “The kids seem to enjoy it so we’re going with it.”

The spirited 80-minute workout focused on technique and conditioning under the game lights. It was also a good team-bonding experience, as players worked up a nice sweat while their opponents were asleep. They also got just enough soreness to create a little adversity at the second practice, which started at 9 a.m. Monday.

“I like (the midnight practice),” senior Caden Ochsendorf said. “It gets us ready for the season. Not many teams around here are doing this; we’re like the first one. We practice the earliest, and we’ll practice the longest, hopefully.

“It really builds the team. It gets everybody out here. It’s not that easy to stay up til midnight or getting up at midnight, coming out here, waking up right away in the morning again. ... It shows the strength of all the kids who show up.”

Monday was the first day that high-school athletic teams could hold practices, though most waited until the sun came up.

In the gym at Mankato Loyola, there’s a little more excitement on the volleyball team. After two years of playing only a junior varsity schedule because of low numbers, the Crusaders will have a varsity team this season.

“Everyone came in with really good energy,” senior Zoey Weller said. “We’re all really excited to start the season. It’s our first year of being a varsity in a few years.”

Two years ago, when Dave Nixon was hired as the coach, there was only one senior in the program and two juniors. On Monday, there were 15 players in grades 9-12 and a few more younger kids, which will allow the Crusaders to have a varsity and C-squad team. Volleyball will be the only girls sport at Loyola that isn’t part of a co-op with another school.

“Last year, we didn’t have as many people come out and watch our games because we were only a JV,” Weller said. “Hopefully, this year we’ll get bigger crowds.

“The program is slowly getting bigger. We’re getting more and more girls out to play. Hopefully, now that we have a varsity, even more girls will come out next year.”

Mankato West’s new activities director Joe Johnson was just as busy as the coaches and athletes Monday. He’s been on the job since July 1, but the first day of practice always holds a few surprises.

“There’s just a different feel today,” Johnson said. “There’s always people coming into the office, filling out paperwork. It’s been an empty building all summer, but you could feel a buzz around campus today.”

Johnson, who spent 12 years as a teacher and coach at Mankato East, took care of some last-minute registrations and prepared for a parents’ meeting later Monday. With games beginning next week and really ramping up the following week, Johnson has realized the importance of communication and establishing a timeline to make sure everything gets done.

“This is going to be a year of firsts for me,” he said. “A lot of stuff is new to me. I don’t think you can over-communicate, and it’s important for me to support the coaches and kids so they can get off to a good start.”

After so many years at East, he admitted it’s still a little unusual to be watching the Scarlets practice. His black shirt is a nice transition from the gold clothing at East to the red apparel at West. He still calls East activities director Todd Waterbury with questions, using him as a mentor.

“I feel like the kids and the coaches are so much more connected now,” Johnson said. “It used to be that you never talked to your rivals, but now through summer programs or social media, everyone knows each other more. There’s more community.”