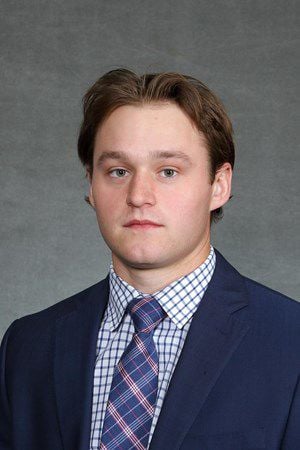 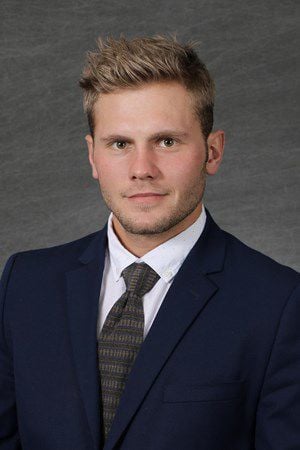 Late in the third period with his team down by two goals, Mike Hastings noted what his bench looked like as it desperately sought to prevent being upset by Alaska Anchorage on Saturday.

“The bench was a little roomy,” the Minnesota State men’s hockey coach said after what he called a “gutty” come-from-behind 2-2 tie.

The Mavericks’ top two centers, Marc Michaelis and Jake Jaremko, were back in Mankato recovering from injuries. Another regular center, senior Josh French, tried to go in warmups before shutting it down. Top-scoring freshman Lucas Sowder didn’t dress at all on Saturday.

Minnesota State still put out a full lineup but fell behind 2-0 to the four-win Seawolves in the first period.

In the second period, the Mavericks lost Walker Duehr to a major penalty and game misconduct for a head-contact infraction. Early the third, Chris Van Os-Shaw was called for checking-from-behind major and also got tossed from the game. Midway through the final period, Julian Napravnik was injured on a hit knee to knee. He had to be assisted out of the rink and didn’t return.

“I think it would have been really easy to pull the ripcord and say, ‘It isn’t our night,’” Hastings said, “but the guys stuck with it.”

Hastings pulled goaltender Dryden McKay for an extra attacker during a late power play. The Mavericks didn’t score during the power play, but with 57 seconds left in the period and the goalie still out, they finally got on the board.

Senior Parker Tuomie got to the right post and fired in a pass from Charlie Gerard, who was near the boards behind the net. Defenseman Connor Mackey, who had kept the puck in at the blue line, also assisted on the play.

As the final seconds ticked away, the Mavericks had another good chance saved by Seawolves goaltender Kris Carlson, but the puck went behind the net. Gerard tracked it and sent it out front where Mackey fired into traffic. The puck deflected out to defenseman Ian Scheid on the right side, and he blasted it into the net with less than a second showing on the clock.

“I liked the guys played with poise,” Hastings said. “Playing with poise is so important, and I thought we showed a lot of it.”

It was the first goal of the season for Scheid. Although it won’t officially count as his second, Scheid’s 3-on-3 goal following a scoreless overtime gave the Mavericks the extra point for the WCHA standings, and, with Friday’s 7-1 win, they left Anchorage with five points.

“Ian Scheid was an absolute ball player this weekend,” Hastings said. “That’s the type of game you want from a senior.”

“Not a good recipe,” Hastings said. “But we found a way to get a second point tonight.”

It was also the third time, going back to last season’s WCHA playoff championship win over Bowling Green, that the Mavericks have scored two extra-attacker goals in a game.

Mavericks goaltender Dryden McKay made 18 saves, including a tough one in the first overtime. He also stopped four shots in the 3-on-3 overtime. Carlson made 35 saves and got a lot of help from his teammates, who blocked 24 shots. Senior defenseman Nolan Nicholas blocked eight shots, a single-game high in the WCHA this season.

Hastings didn’t have an injury report on Napravnik immediately after the game, other than to say that he was being checked out. Napravnik had three assists in Friday’s victory.

Minnesota State lost one point from its lead over second-place Bemidji State in the WCHA standings and now has a five-point advantage.

Bemidji State swept Bowling Green at Bemidji, winning 4-1 and 4-2. Northern Michigan, which as two games in hand, has a stronghold on third place after sweeping Ferris State 5-2 and 5-2.

Fourth-place Alaska was idle, and Michigan Tech missed out on a chance to tie the Nanooks in the standings by splitting at Alabama Huntsville with a 4-1 win and a 3-1 loss. Huntsville’s win was just its second of the season.

Bowling Green is in sixth place, followed by Lake Superior State, which tied the U.S. Under-18 team in an exhibition game on Friday.

Alaska Anchorage currently holds the eighth and final playoff spot with a three-point lead over Ferris State. If the standings hold as is, the Seawolves will travel to Mankato for the first round of the WCHA tournament March 6-8.

Minnesota State returns to Mankato today and will host Northern Michigan on Friday and Saturday at the Mayo Clinic Health System Event Center.

The Mavericks and Wildcats split a series at Marquette, Michigan, on Dec. 13-14. Minnesota State is 9-2-1 and Northern Michigan is 7-1-2 since then.