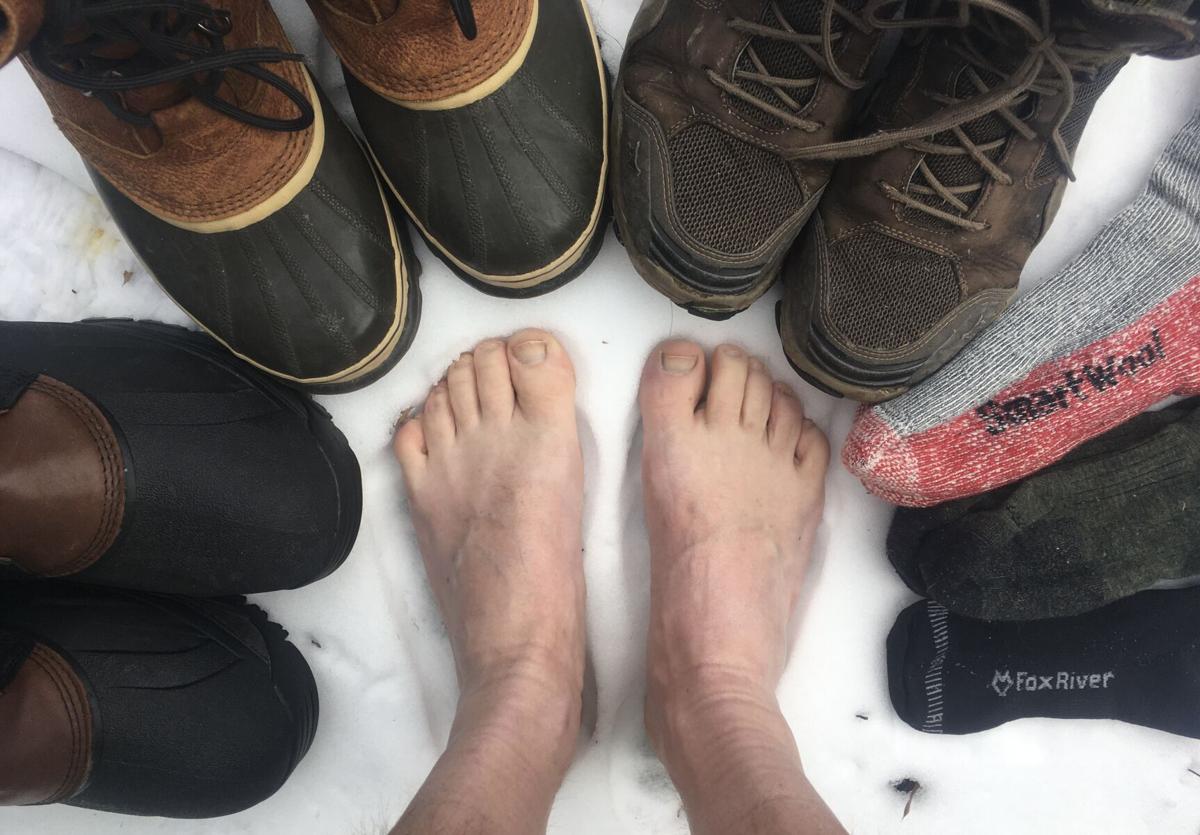 An array of footwear to choose from will help assemble the right combination for any conditions. 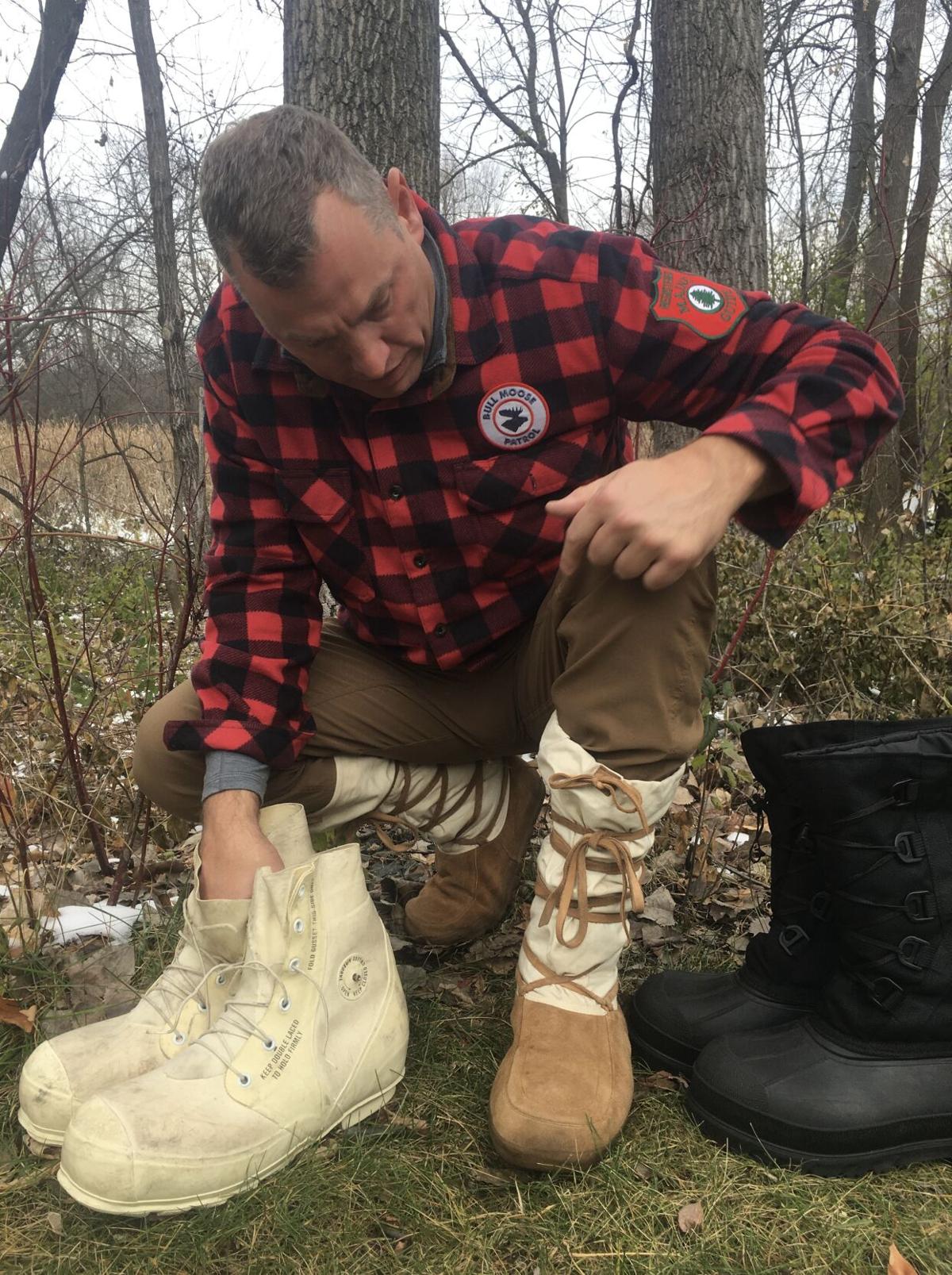 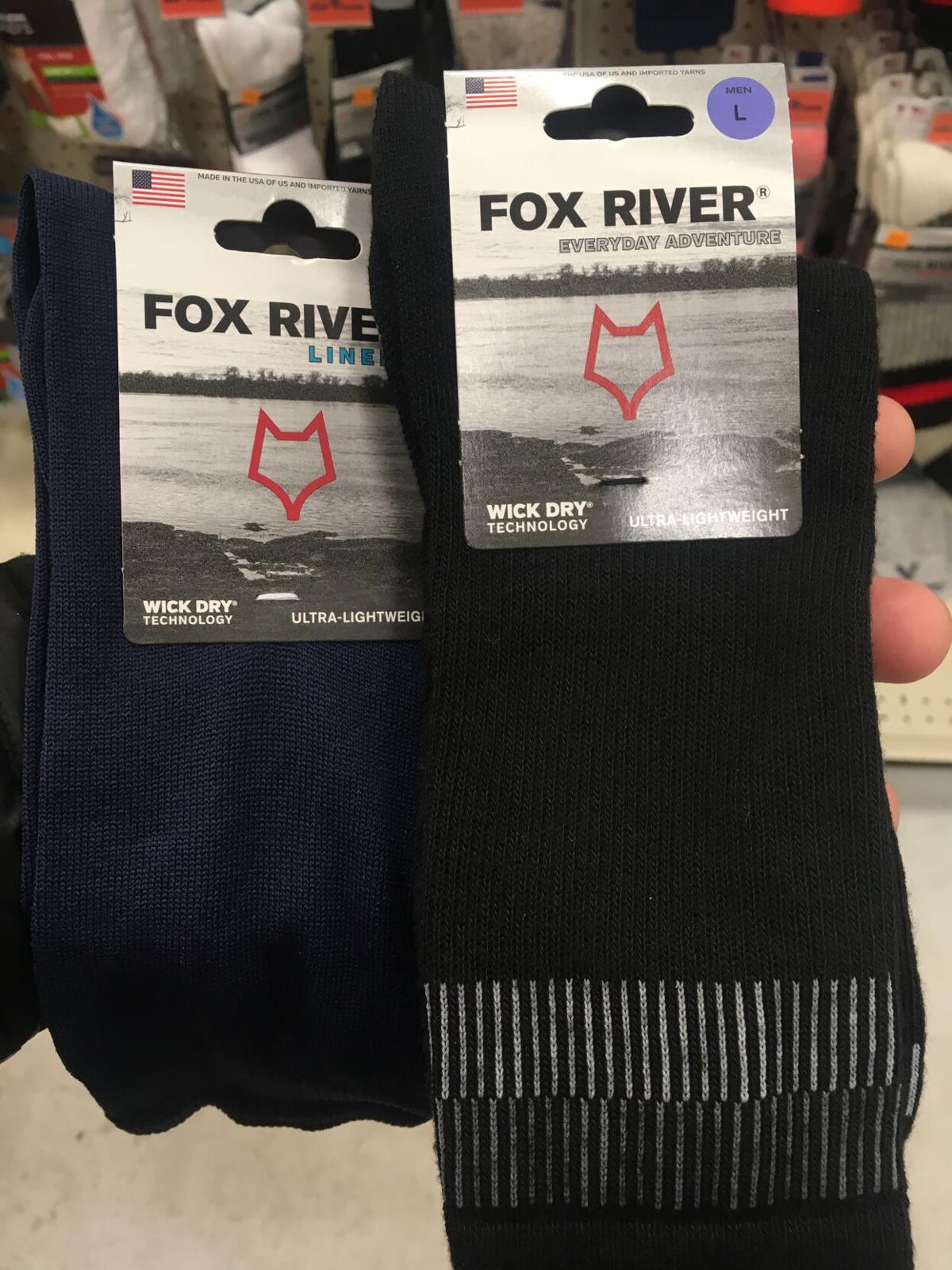 For a few bucks, liner socks go a long way in the interest of moisture management.

An array of footwear to choose from will help assemble the right combination for any conditions.

For a few bucks, liner socks go a long way in the interest of moisture management.

As days get shorter and nights grow colder, Minnesotans know instinctively what is at hand: cold feet season.

Winter recreationists of all kinds know what I’m talking about — it can ruin a day afield when little piggies go numb.

My own problems with cold feet started a few years back. It was sudden and undeniable.

Concern about frostbite prompted me to investigate how to get ahead of it.

One concept that quickly rose to the surface is that moisture (foot sweat) is a big deal. It compromises insulation, especially that of cheap felt boot liners.

I also learned that synthetic materials fare better against sweat, especially if a boot’s design allows such moisture to escape.

I began paying attention to insulation and breathability, and invested in good socks.

I knew I was on to something two years ago, on a grouse hunt in 2 inches of fresh, wet snow. My preparation started with thin liner socks to move sweat away from my feet. Heavyweight wool socks went over those, to insulate and keep moisture moving outward.

My uninsulated Irish Setter Vaprtrek boots completed my armor, keeping the melting snow out while allowing moisture from within to escape.

It worked perfectly. Not only did my toes stay warm, but when I took the boots off, my feet were neither hot nor cold and the wool socks were dry to the touch.

With that success, I was optimistic I could weather the upcoming ice fishing season better. Unfortunately, that didn’t come true.

Back at the drawing board, I considered that the toes of my pac boots were pretty tight and probably not allowing blood to flow freely. (That is also a big deal in keeping toes toasty.)

I bit the bullet and ordered new boots with a large toe box and supposedly good moisture-wicking capability.

They showed promise immediately, so I took them for a multi-night winter camping/fishing trip to the BWCA this January. They worked well until the morning of the third day, when accumulated sweat (frost, really) had built up inside the liners.

Discouraged again, I was at a loss for what to do. I needed advanced help.

About a month later, a winter camping webinar hosted by Scott Oeth, a Minnesota wilderness and survival expert, provided a ray of hope.

A financial advisor by day, he also runs the Bull Moose Patrol, a wilderness guiding and outdoor skills instruction venture.

He touched on boots and clothing in that webinar, and I had a hunch his well of knowledge ran deep.

I called on Oeth the other day to help me round out my understanding of winter boots. He had plenty to say, as expected.

When it comes to boots — or any winter clothing — Oeth has a keen focus on keeping moisture off the skin and out of insulating layers. He uses the phrase “moisture management” often, and that concept factors heavily in his use of footwear.

Oeth has used lots of different boots, and has even more tips for getting the most out of them. One of his favorites is the “mukluk” style of winter boot, in part because they are “super warm and very comfortable to wear.”

They also have a high capacity for expelling moisture.

However, he explains their non-waterproof nature limits their usefulness to temperatures well below freezing: “The big drawback is that they’re for that consistently dry cold. If it’s wet out, you’re gonna have issues.”

A simple solution to that problem, he says, is a simple rubber overshoe.

Mukluks have become somewhat popular in these parts because of Steger Mukluks, of Ely. But they are available elsewhere, including from U.S. and Canadian military surplus.

I’m glad to hear that, having recently acquired a pair as an inexpensive experiment.

Another type he touts is the U.S. military “bunny boot.” Formally known as Extreme Cold Vapor Barrier boots, they were developed in the Korean War era and have been around since. (I have known of the ECVBs for some time, but wasn’t sure what to make of them.)

Apparently, their insulation is sandwiched between outer and inner layers of rubber, which keeps it completely separated from any moisture.

He can only remember once when his feet were cold in them, and he chalks that up to being dehydrated at the time.

The main drawback, he says, is that a person’s feet cannot breathe in them, and “your feet get sweaty in them — kinda swampy.”

I inquired about the usefulness of pac boots, since traditional wisdom says an outer shell with removable liner is best. Scott agreed: “Having removable liners is huge.”

He also pointed out that pac boots typically have a rubber lower portion and are reasonably waterproof, which is an advantage over mukluks.

Oeth had among his supplies a pair of Sorels with their felt liners, but he also had another pac boot with a flexible synthetic upper into which he’d inserted liners from Steger mukluks.

Time and again, he mentioned swapping liners and adding insoles to make boots perform the way he wanted. Kind of like playing Mr. Potato Head with the various components.

Considering how much a wilderness guide tinkers with his boots, the idea of picking the “best” or “warmest” boot on the sales floor seems a ridiculous notion to me now.

All the same, I wondered if Oeth would rank his boots for all-around warmth potential. He was hesitant, saying, “there are pros and cons to everything.”

But with the caveat that each type of boot has its own characteristics and best uses, he thoughtfully graded his favorites.

“The top of the pyramid,” as he put it, are mukluks. “They’re super warm and comfortable to wear.”

Second place was awarded to bunny boots: “They’re a little clunkier, but super warm. If I’m worried, I grab those and bring them along.”

Third place was given to “a good pac boot”: “They can cover a range of conditions pretty well.”

A somewhat distant fourth place was given to what Oeth calls “neoprene boots”: Muck, Bogs, and the like.

He likes the convenience of their slip on/slip off nature, but warns “they’re kind of a one-day-use boot. They’re tough to dry out.”

I asked what he thought of lace-up boots, the kind with space-age insulations sewn in. He shook his head.

“With almost everything I do, I want it to come apart,” he said, in order to “manage heat and dry them out.”

In fact, he indicated he doesn’t own a single pair.

Though our conversation was coming to a close, Oetrh couldn’t help but throwing out ideas as they came to mind, multiplying the miscellany of tips and tweaks to try: closed-cell foam insoles, fleece foot wraps, extra liners, mesh insoles, liners made with niche materials, and more.

That’s when it hit me: keeping your feet warm is a complicated game.

Having more tools to work with helps, and taking the time to adjust one’s usage of those tools can make all the difference.

Though I understand it all better now, there’s a lot of experimentation still ahead of me. Just this week, I tried what Oeth calls a “vapor barrier,” which is essentially a plastic bag worn between the liner sock and insulating sock.

It worked better than expected on my all-day deer hunt in heavy wind.

Of course, that was just one of Oeth’s suggestions. I’ve been inspired to seek additional equipment, and tinker until the warm season rolls around.

With any luck, my feet won’t be a hindrance to ice fishing outings this year.

Now if I could just figure out how to keep my fingers warm.

Roy Heilman is an outdoorsman, writer, musician, and ethnic Minnesotan. His adventures take him all over the map, but he can always be found at neveragoosechase.com.