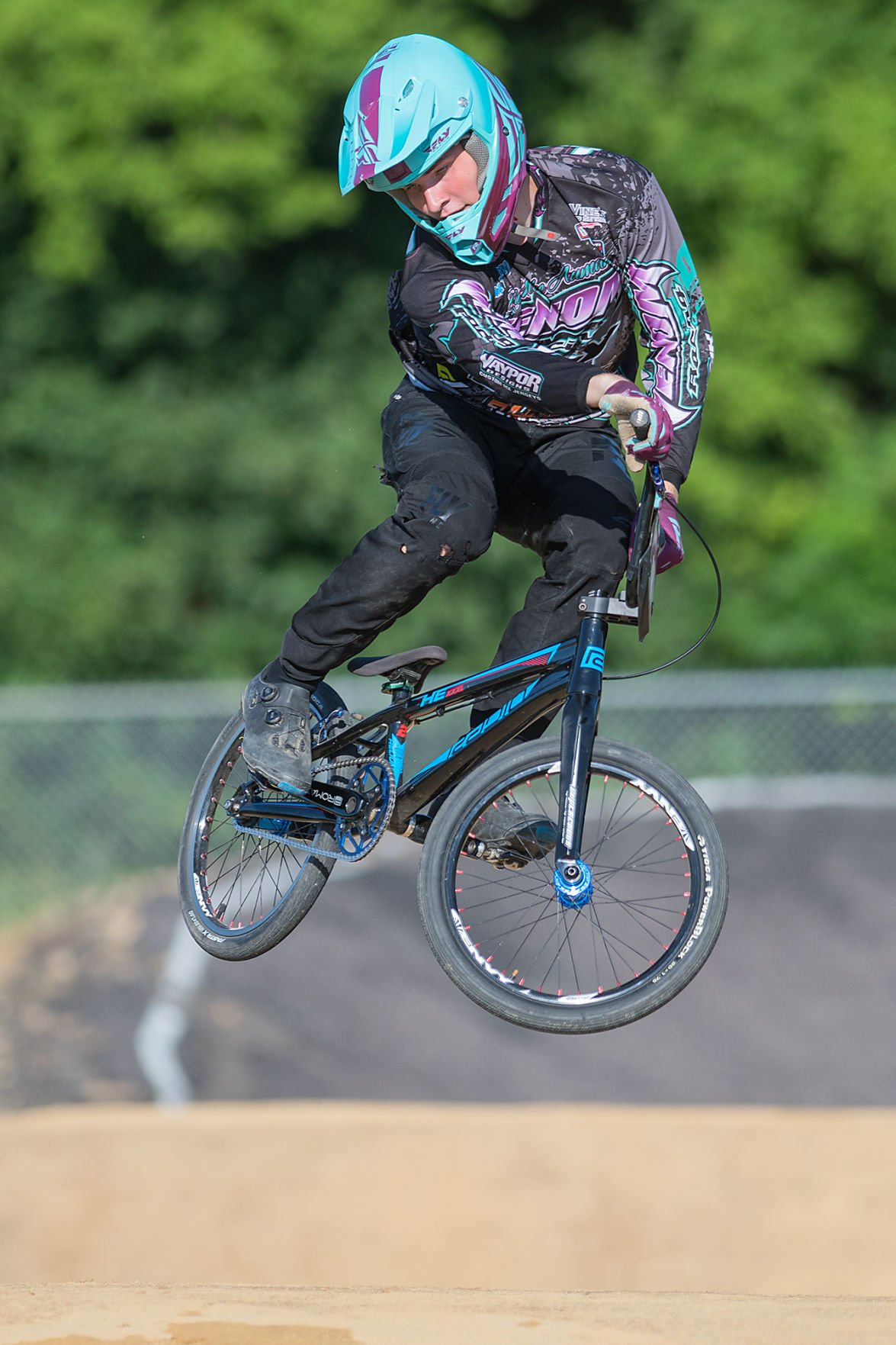 Colten Landwer, 16, takes a jump at the Mankato BMX track on Wednesday evening as riders warmed up for races. 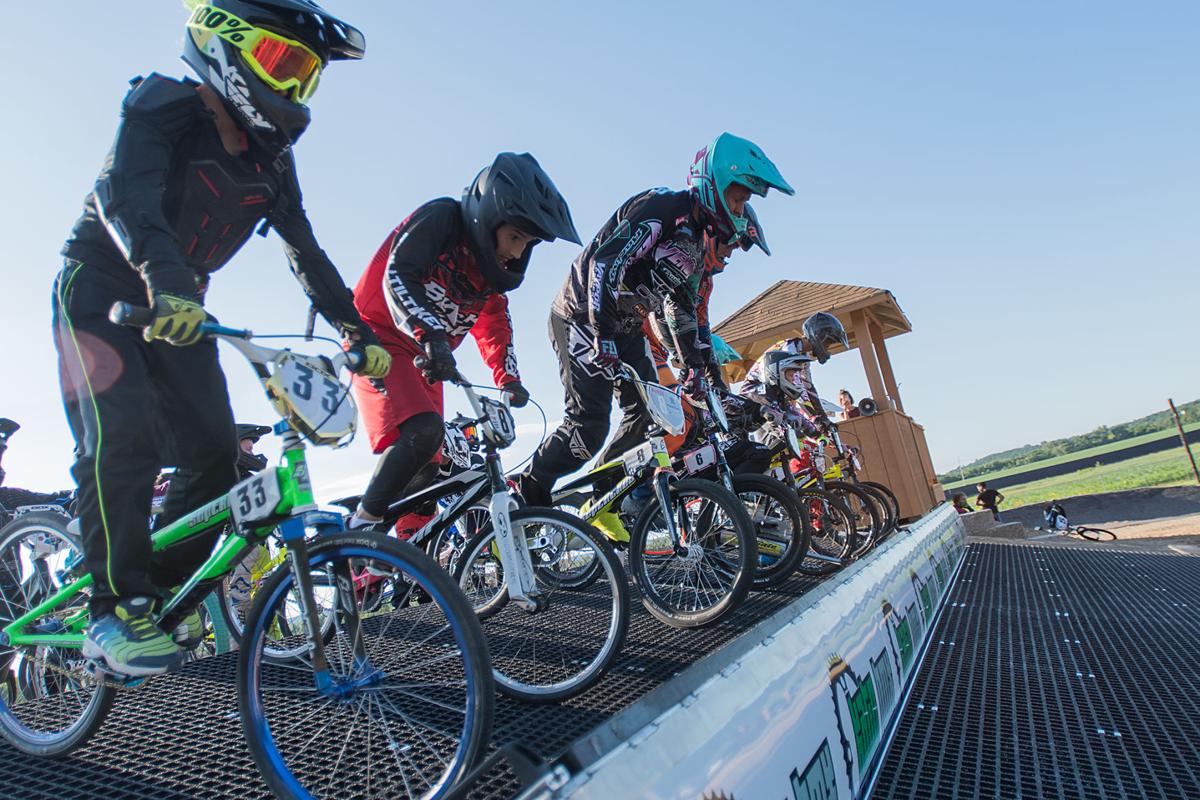 A group of BMX riders start their ride on the course as the gate drops in front of them on Wednesday at the BMX track in Mankato. 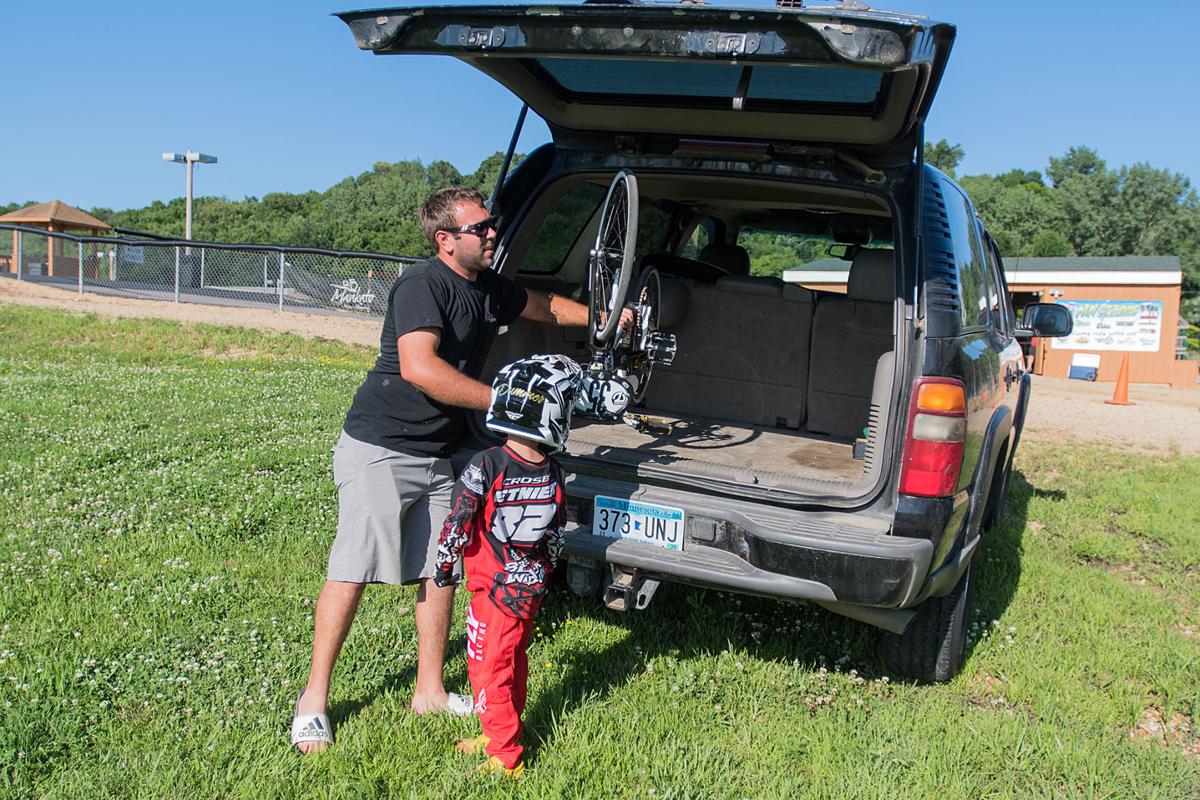 Colten Landwer, 16, takes a jump at the Mankato BMX track on Wednesday evening as riders warmed up for races.

A group of BMX riders start their ride on the course as the gate drops in front of them on Wednesday at the BMX track in Mankato.

Mike Voss made a bet with his son, Dalton, last summer. If the then-7-year-old earned a state plate in his first year of BMX riding, Mike would get his own bike and join him on the track.

Sure enough, Dalton came through on his end of the bargain, so his dad paid up, so to speak, and started racing.

Voss at least had some BMX experience from his childhood, right?

Jim Klein wasn’t so lucky when he started racing in 2014.

“I broke my collarbone in my very first race ever,” Klein, 48, said. “But the following October, I was racing again. Now I race three times a week on two different bikes.”

As with Voss, Klein followed his kids on to the track, rather than the other way around. Klein’s sons, Jameson, 18, and Daniel, 14, started BMX racing in 2010.

Klein went all in, as many parents do, and is also one of the Mankato BMX track operators, along with Paul Welckle.

“He was a godsend when he joined because he helps us maintain the track,” longtime club member Lynn Austin said of Klein. “He’s even camped out down here to get everything done.”

This week’s rain has kept Klein, Welckle and several other volunteers quite busy as they fought Mother Nature to get the track ready for its busiest week of the season.

“Keeping the track in good condition has taken a lot of extra work this year,” Welckle said.

On Wednesday evening, the track held its regular, weekly race night. This weekend will be the Mankato stop on the Minnesota BMX State Series with a double-points race starting at 6 p.m. today and state-qualifying racing starting at 11 a.m. Saturday.

As many as 400 participants are expected for this weekend’s races.

“This is the biggest event of the summer every year,” Welckle said. “It pulls in riders from all over the state.”

It pulls in a lot of families, too. Some make up cheer and support sections, while others are competing alongside one another.

The Austins, for instance, represent three generations with Lynn, 65, his son, Chris, 38, and Chris’ young daughters all riding.

“It’s a pretty tight-knit community,” Welckle said. “We try to convey a family environment, parents coming with their kids and getting involved in it.”

The BMX family extends beyond blood relatives, too, and there’s a lot of giving back.

Wednesday night was the club’s annual Race for Life. Part of a national BMX program, proceeds from that night’s race fees, as well as donations and a raffle, went to the Leukemia & Lymphoma Society.

This weekend, funds will help a family a little closer to home.

“It’s really hit a lot of us hard,” Welckle said.

Spiess is another of a three-generation BMX family. His father, Mike Spiess, goes back to the club’s beginnings in the early 1980s, and his two young children are striders — riders competing on bikes without pedals.

“There’s lot of love for this sport in that family,” Welckle said. “There’s a lot of love there.”