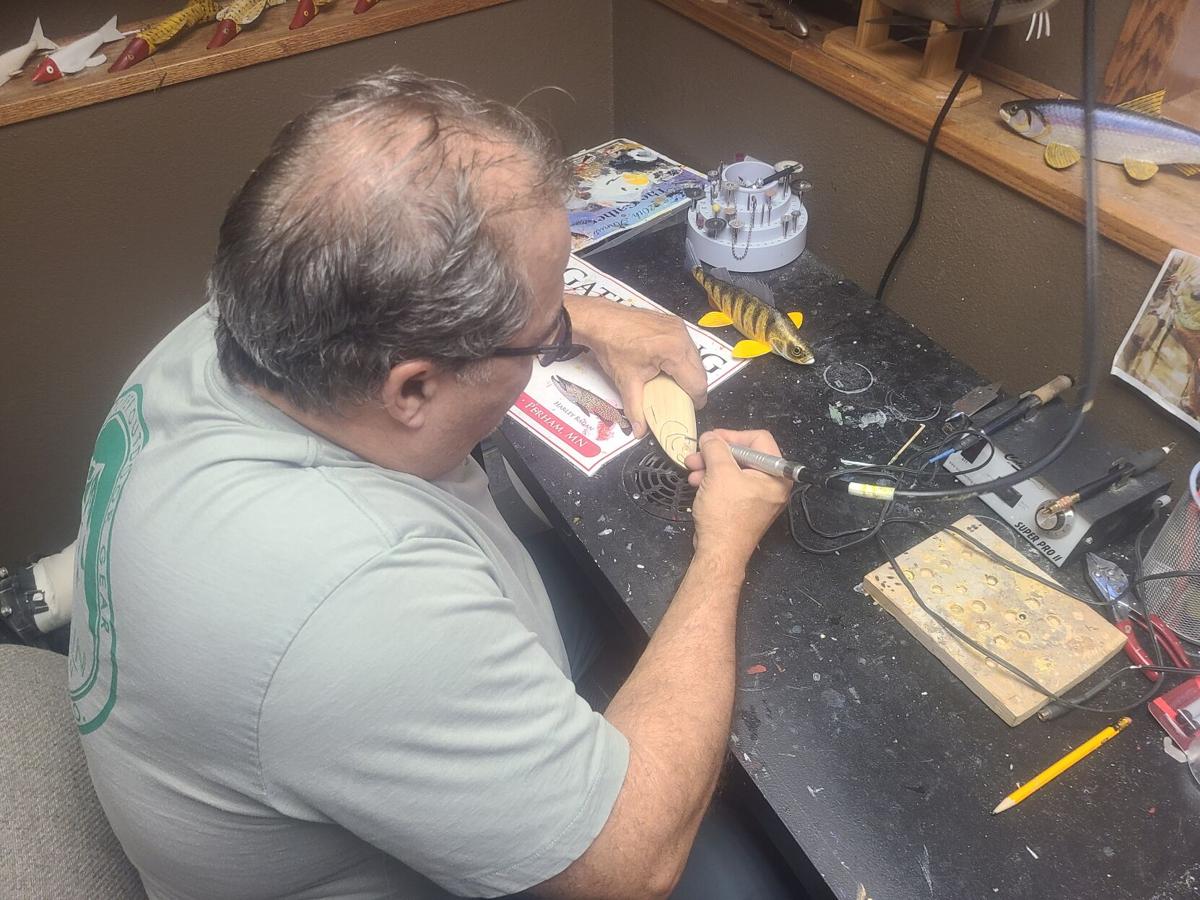 It’s never too late to start a new hobby.

In Brian Shallbetter’s case, he started two around the age of 50.

In 2008, he brought a flat, inexpensive spear out to Pelican Lake by Monticello, dropped down a decoy below the ice from a darkhouse he bought used, and waited. Shallbetter remembered thinking he was going to be bored stiff all day.

But then a short time later, a huge northern pike squared up on his decoy.

Shallbetter speared the fish and had a 10-pounder to show for his first time on the water.

“Now I was thinking ‘this is pretty cool,’ ” remembered Shallbetter.

Something about time in the spear shack, and the way the pike and other fish were mesmerized by the decoy, clicked for Shallbetter.

Just two years later, he began carving his own decoys in his New Prague workshop.

“I went hunting and fishing with my dad all the time,” Shallbetter said, “but I never knew I had this artistic ability. I would have never thought it was in me.”

Shallbetter started by consulting a decoy carving book with some basic fish form outlines, then learned to hand carve fish decoys entirely by trial and error.

He begins with a block of wood, which he’ll often get by visiting sawmills. There, he can have mill operators cut the blocks to his preferred measurements.

Shallbetter prefers cedar and pine for working decoys, or decoys that will be used for darkhouse spearing. Decorative decoys, sought by collectors and likely to sit on shelves, can be cut from basswood.

Basswood, Shallbetter says, cuts easily, but if the paint does get chipped, will allow water to soak into the body of the decoy.

Every decoy produced by Shallbetter is handcarved using an X-Acto knife and a rough-out knife. The forms are first cut with a band saw, and Shallbetter applies a hand-drawn, penciled-in centerline to help him keep everything even and symmetrical.

The only thing grinded are the eye sockets.

The body is finished with sandpaper.

Whether painting or sanding, Shallbetter says, what you do on one side has to match what is done on the other.

Fins are cut out of aluminum and a Dremel saw is used to finish them. Scales are burned in with a wood-burning tool.

All painting is done by hand, with the exception of a tool Shallbetter uses for rolling on spots for trout.

“Lots of people are surprised to learn it’s hand-painted,” Shallbetter told me. “Many assume my decoys are airbrushed, but I hand-paint everything. I’ve learned how to manipulate acrylic with some water to slow down the drying and get some layering.

“That’s been a 10-year learning curve. You build details as you go out. Eventually you get your own look and style.”

Decoys are finished with a glass eye from a taxidermy supplier, and Shallbetter applies a clearcoat at the end for a visually striking finish.

Each decoy takes 8 to 40 hours to complete, but according to Shallbetter, it’s a labor of love.

“I’ve been told by other carvers that I got really good, really fast,” Brian recalled, “but it still takes time. You have to want to get better and improve.”

One of the ways Shallbetter improved was to start entering competitions.

“You get feedback and critique,” Shallbetter says, “and you have to swim them. Getting into competitions makes you better because you have something and someone to aim for.”

It’s a celebration of outdoor pursuits, highlighted by artistic competitions for carvers of fish, birds and other wildlife.

After being cancelled for the past two years because of COVID concerns, it’s back on for April 2022.

Shallbetter has placed a number of times and enjoys the chance to visit with fellow spearers and carvers and take in the annual event complete with fish fry and a few kegs of beer.

It’s a great spot to meet carvers and learn from the best.

“If anyone wants to get into decoy carving, people are out there and will help you,” advises Shallbetter. “We want to see young people take this up. We want to pass carving and spearing along; it’s sport and art.”

Shallbetter’s winters are spent doing what he loves, going spearing and carving decoys.

The timing is perfect. Shallbetter works in the construction industry, doing bidding for roofing and exterior projects, so he has down time in winter.

He says he’s known best for his ciscoes, but he has carved numerous species, including suckers, chubs, pike, sunfish, bass, perch, walleye and salmon.

“It’s my Redneck 401K,” says Shallbetter. “Selling carved decoys has allowed me to also become a collector. I can invest in the hobby I enjoy as well as supporting other carvers.”

You can find Brian’s work at “Shallbetter’s Decoys” on Facebook.

Scott Mackenthun has been writing about hunting and fishing since 2005. Email him at scott.mackenthun@gmail.com.