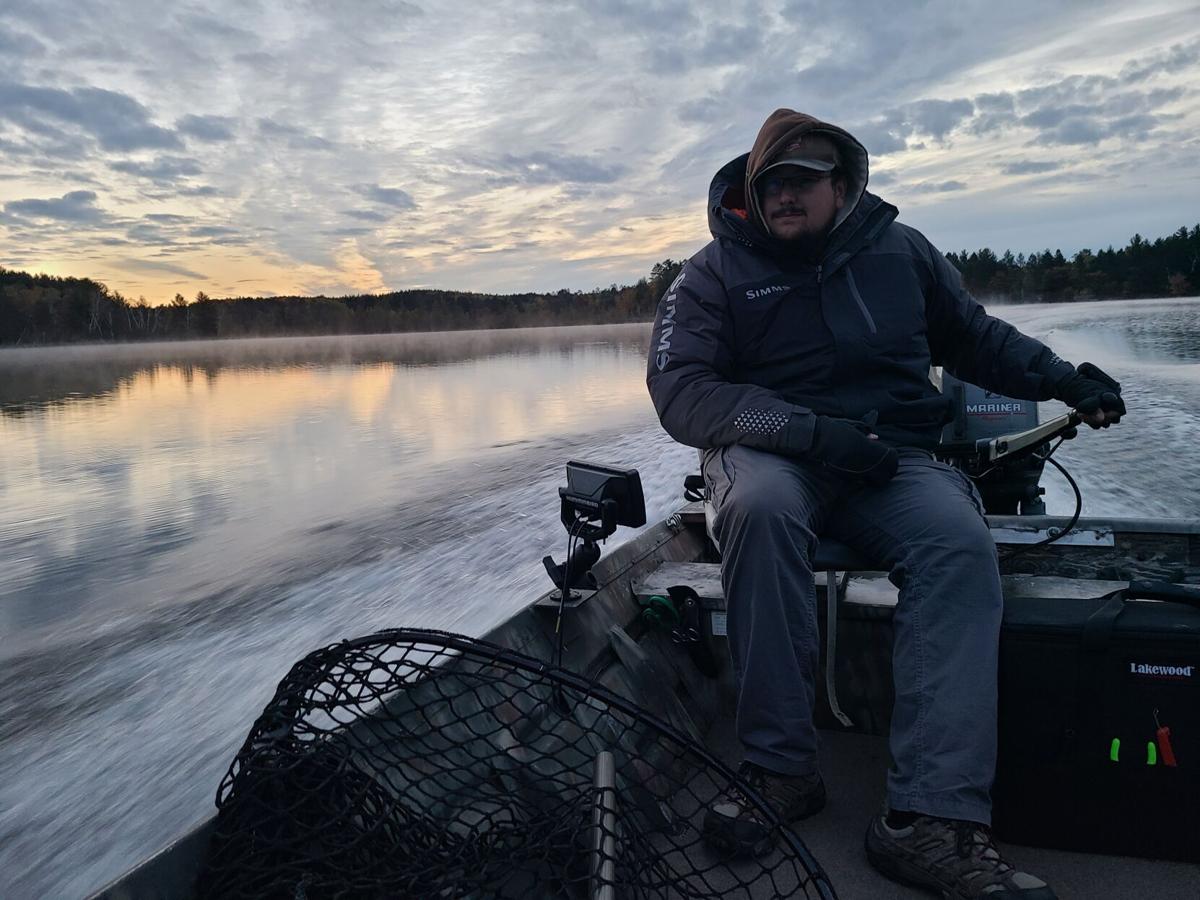 Justin Hokanson heads for an underwater point to begin a 12-hour autumn day of muskie fishing in Bayfield County, Wis. 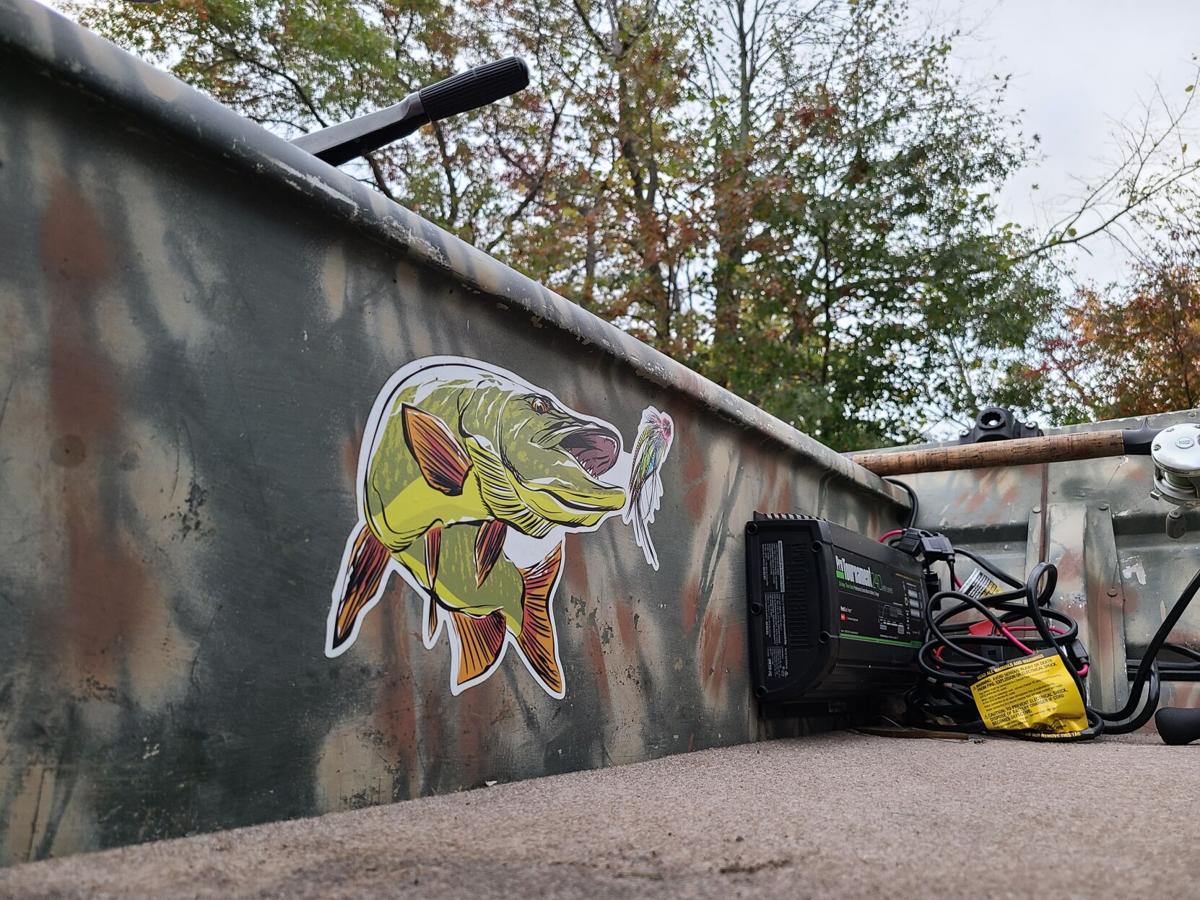 Muskie on the fly represents a pinnacle achievement for many muskie anglers. Former fishing guide Justin Hokanson’s jon boat is adorned with a sticker showing a fish about to inhale a large streamer.

Justin Hokanson heads for an underwater point to begin a 12-hour autumn day of muskie fishing in Bayfield County, Wis.

Muskie on the fly represents a pinnacle achievement for many muskie anglers. Former fishing guide Justin Hokanson’s jon boat is adorned with a sticker showing a fish about to inhale a large streamer.

It’s 3:30 a.m. when the alarms go off, and two angling fanatics are up and dressing.

David Yff and Justin Hokanson were obsessed anglers when they met as students at the University of Wisconsin, Stevens Point. Today is the third day in their reunion that was two years in the making, and Hokanson has just introduced me to Yff upon my arrival.

I’ve known Hokanson since he was a high-school student in love with fishing. We met up for a few fly fishing adventures on Minnesota warm-water streams, on tributaries to Lake Michigan for salmon, and working together as guides during a youth fly fishing immersion weekend in southeast Minnesota.

Hokanson landed in Wisconsin after graduating from Owatonna High School and hasn’t left the state. He enjoys the fishing opportunities, unique outdoor resources and the Wisconsin beer, brat, and cheese culture.

He has dabbled in guiding with some of the best muskie fly anglers in Wisconsin, worked as a manager at a trout farm, and a little over a year ago, in the most Wisconsin move ever, began working in a cheese factory to start paying down his student loans and finance his passion for muskies.

Hokanson may return to guiding someday but for now is content to work hard and fish harder.

Yff is wrapping up a Master’s Degree in fisheries, studying Asian carp at Eastern Illinois University.

To be this devoted to muskie fishing, you have to be fanatical. Hokanson has been chasing these fish for as long as he could; more impressively, he began as a fly angler and has only recently begun targeting the fish with baitcasting reels and lures in order to relieve strained wrists and forearms.

Through the first two days, the pair has seen a good number of muskie and lost one that did hit a bait. Today they’ll continue the quest, leaving a duplex in a small town east of Chippewa Falls to make their way north toward Hayward.

Hayward is a muskellunge fishing mecca, as the site of the National Freshwater Fishing Hall of Fame as well as home to Cal Johnson’s 1949 world record muskie.

Muskies are called the fish of 10,000 casts for the simple reason that they can be difficult to catch. For starters, as apex predators, there just aren’t that many of them in any lake or river. And when they get large, as a cold-blooded organism, they only need eat a couple big meals from time to time. They can’t get old and large without becoming a little wise along the way.

Added together, these fish can be hard to catch, particularly on heavily pressured lakes and rivers. Each fish, regardless of size, truly is a trophy.

Insisting on being in position and casting before first light on a particularly clear-water lake, Yff and Hokanson rise early and make the drive north in the dark, launching the boat as dawn begins bathing the lake in sunlight while a small flock of mallards call in a sedge-lined bay.

“If I’d had a drug habit, I’d probably have more money,” jokes Hokanson.

He’s the first to admit he has a bad muskie addiction. His world begins and ends with the fish. His living room features photos of fish he’s caught, a fly-tying bench littered with dyed buck tails and long, showy chicken hackles, and muskies lures and leaders here and there.

The men motor out to a distinct underwater point lined with vegetation, a feature they’ve fished around and observed muskies on before. It’s a briskly cold morning, some 5 or 6 degrees below freezing.

While both men are determined to throw lures and flies from sunrise to sunset, they’ll pay closest attention to the daily lunar phases, which some muskie anglers believe are linked to key feeding windows for the species.

In the first few hours, the pair see a couple muskies that follow lures but won’t hit, even when the baits are worked in lazy circles or figure-8s to entice boatside strikes. The best action of the day comes from the occasional ambitious and enthusiastic northern pike, small specimens from 1 to 4 pounds that are attacking a lure that is nearly as big as the pike.

Neither man cusses the determined fish for it’s nice to have a break from the monotony of casting lures with no tug on the end of the line.

By the end of the morning, the pair make a democratic decision to leave the lake to return to a different lake an hour distant that produced a number of follows yesterday.

Nicknamed the Muskie Sasquatch after he brazenly ran off a young black bear that kept harassing a muskie fishing guide’s camp, Hokanson has the appearance of a true fishing bum, although it’s partly the result of six months of quarantining.

His black hair is curled, pulled tight into a bun or tucked under the edges of a baseball cap. A moustache and chin-curtain beard complete the look, set below his familiar sunglasses and faded and dirty-billed guide cap.

I ask Hokanson how he keeps going with 12-hour shifts of hard, physical labor and longer days off spent chasing a fish that can be fickle, acting as an apparition for weeks at a time.

“Caffeine, nicotine, and rage,” is his succinct response, noting his frustration, the madness he gets as the fishless days and hours add up, helps him stay focused and ticked off enough to want to score against the challenging muskie.

Yff and Hokanson throw lures in familiar haunts, but it’s a different day and a different mood for this lake’s muskies. Hokanson has one fish follow, but nothing will commit. The remainder of the afternoon passes with no action, except for a single northern pike.

Without hanging heads, the pair call it a day and head for home, to crawl into beds and recharge for another full day of fishing.

On the second day, it’s another early start, this time heading east of Hayward to try some river musky fly fishing.

Musky fly fishing is anything but elegant. Giant streamers are put on shooting head sinking fly lines. After dousing these flies in the receiving water, they have enough bulk to be tossed around easily, as compared to the dainty flies used on trout or bass that rely on the weight of the fly line to carry them forward.

Casted easily is probably not the right description – they are chucked around in a fatiguing manner. Hokanson tells me about a client who prepared to spend a weekend fly fishing muskies by practicing the casting motion with a sledgehammer for weeks ahead of his trip.

Yff and Hokanson sling flies with aggressive rod swings and line hauls that looks like pull-starting a motor. They move up and down the river, carefully wading as they go.

After sufficiently covering the water, the pair head back to the truck and head up or down stream to a new access site. If they move a fish, they might return to see if it will bite later.

The morning rolls along, stop by stop. No fish seem to be home, until near the noon hour, Yff hooks a muskie. Hokanson grabs his oversize landing net and is at the ready, but halfway back to shore, the fish shakes free, breaking both men’s hearts in the process.

Eventually the day ends as Yff must return to Illinois. Four days, numerous follows, a couple strikes, no fish landed.

It’s an altogether common outcome for muskie anglers, but eternally optimistic, they face the long odds gladly and count each day as moving closer to another muskie in the net and another fish bested.