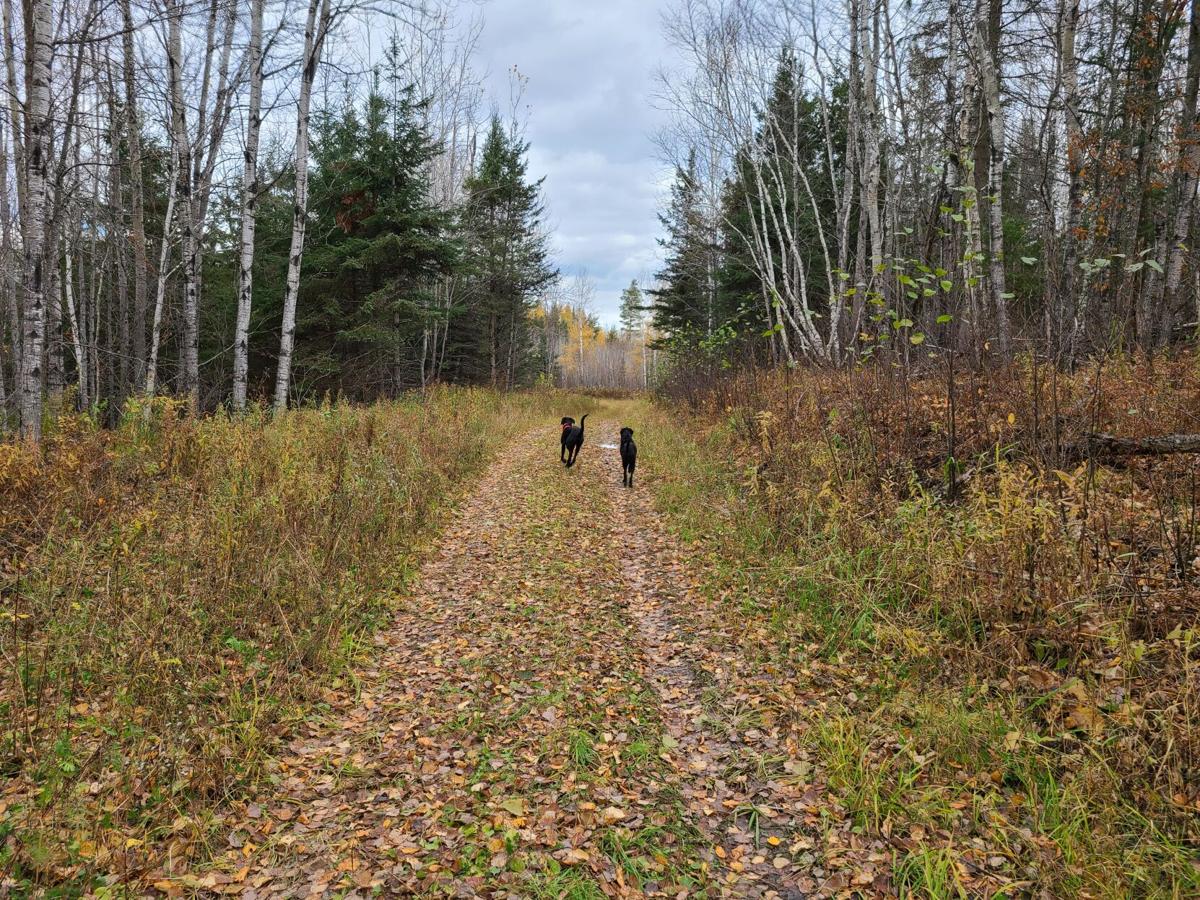 A day before the first snowstorm of the year, two labrador retrievers enjoy running down a trail in pursuit of ruffed grouse. 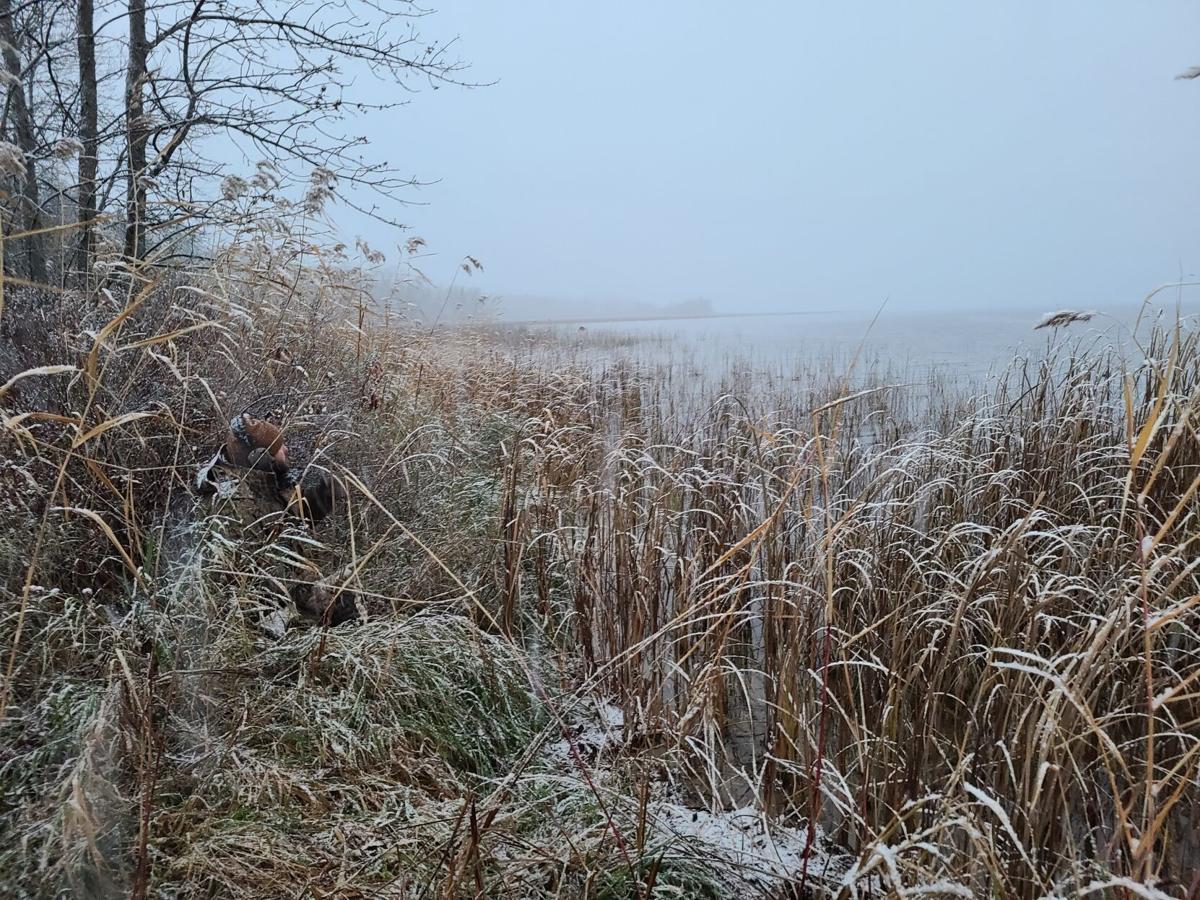 The first snowfall of the year, seen in this photo of a duck hunter on the Sand River in Itasca County, brought about big changes to Minnesota’s landscapes and immediately impacted local hunting. Hot or cold, wet or dry, bare ground or snow-covered, hunters should continue to get outside this fall before winter settles in for good.

A day before the first snowstorm of the year, two labrador retrievers enjoy running down a trail in pursuit of ruffed grouse.

The first snowfall of the year, seen in this photo of a duck hunter on the Sand River in Itasca County, brought about big changes to Minnesota’s landscapes and immediately impacted local hunting. Hot or cold, wet or dry, bare ground or snow-covered, hunters should continue to get outside this fall before winter settles in for good.

In another slight to our battered psyches, Mother Nature pulled the plug on fall early last week, sending the barometer plunging and unleashing the first snowfall of the year.

It seemed to be yet another unusual and unwelcome development in the year 2020.

I had the chance to see this seasonal transition firsthand, spending a few days on the eastern end of the Chippewa National Forest as I do annually in mid-October. I spent part of a Friday strolling aspen mixed age forests with a friend and his wirehaired pointing griffon, then watched the weather change remarkably on Saturday with the first snowstorm of the year.

My ideal day in the grouse woods is 40 or 50 degrees, a mix of sunshine and clouds, and light winds stirring up earthy forest smells of decaying leaves. Every spot looks and smells birdy and in good company there is no finer way to spend a day than with good conversation, good dog work, and enough points to interrupt conversation and stories between friends.

This is an underrated skill of a talented upland hunter – to recall what the topic of conversation was before the chaos of a point and flush stopped a discussion in its tracks.

Mornings were a bit brisker than I prefer. While you can always dress for the cold, one of the side effects of the cold are frosty leaves that crunch under your feet, alerting birds to your every move through the woods.

The first flushes of the morning were some birds loafing in the shadows of tall and spindly spruce trees. It was the kind of location that you could only walk through backwards with eyes closed, the branches were so thick and poking. You’d only be able to plunge through the thick cover if you kept your legs churning like a running back trying to fall backwards and power through the line of scrimmage and a wall of defenders.

Needless to say, no shots were fired, and three flushing grouse made their getaway in cover so thick we could only hear them and not see them.

Ten minutes later, the griffon was offtrail in young aspen and on point. The whistling wingbeats of woodcock erupted upon our inspection, offering a few close quarters shots silhouetted against a gray sky.

We noted the age of aspen and the moist leaf litter below. Later in the day, we searched for matching habitat and found a cutover along a county road that had woodcock stacked up every 40 to 50 yards. You couldn’t go more than a few minutes without a fresh point to check out.

For the better part of the day, we wandered aimlessly along trails through a variety of forest types, finding a few grouse holding here and there, and a few that even offered shots.

There’s no such thing as equality of opportunity in time outdoors with friends, whether it is toting a gun or holding fishing rods, and on this fine gray day, fate shined on me for some reason as I was offered the best shots at grouse and nearly bagged a limit.

We ended the day with a walk to a federally managed lake and stream habitat complex, rousting three grouse in one spot and coming in a little too late to the dog on a pair of grouse she cornered on a lakeshore. If we’d been a little faster, we might have had some shooting.

We were treated to a beautiful fiery red sunset as we doubled back and returned down the trail, the day and legal shooting hours coming to a close.

Saturday was a day of anticipation for the prospect of an epic waterfowl hunt playing off the big change in the weather. We saw few ducks in the area, but a snowstorm was scheduled to start in the morning hours and drop flakes until mid-afternoon.

We had an early morning run to the Sand River, where we headed downstream through a maze of wild rice stalks and found an emergent vegetation point on which to hunker down.

When the skies lightened and the shooting started, a few large flocks of mallards and ringbills worked back toward the direction from which we’d come. They were high in the sky and moving fast, in a hurry to be someplace other than where we were.

Eventually the snow started to fall, stinging eyes glancing up and down river on the watch for birds. A pair of wood ducks nearly caught us offguard, but I noticed them bearing down on us low to the water with a half-hazard glance downstream alerted my companion, and we dropped the pair in perfect unison.

We watched a few flocks of divers work neighboring blinds and with visibility impaired by snowfall, heard a few shotgun reports from upstream, letting us know that at least a few hunters were having success.

By late morning, we picked up our blocks and headed in. No great push of birds was here so early; the ghosts of ringneck and bluebill flocks in hunts of our past beckoned our return on this day.

Slip-sliding back to warm beds and an afternoon nap, eventually I returned to the grouse woods late in the afternoon.

In a day’s time, the forest was different. The snow was loud and squishy and hung on branches, ready to fall down the nape of your neck as you brushed snow-covered tree and shrub branches.

There wasn’t a bird track to be found, although I did see a few peeping grouse eye me suspiciously at a distance with stretched necks and raised tufted crests before scrambling for thicker cover or flying away far out of shotgun range.

Eventually the snow will melt and some semblance of fall will return. There’s still some autumn left, as evidenced by two maple trees in my back yard with green leaves contrasted against a white background.

Whatever comes next with weather, there is still the majority of upland bird, waterfowl, and a generous amount of time to hunt deer with a variety of weapons.

Don’t let the snow get you down; you can’t pick the weather but you can dress for and make the most of it. Seasons change, drastically at times, but there is always some occasion to bundle up and trudge through snow in pursuit of a good time, with fish or game a goal but really an accessory to the chase.