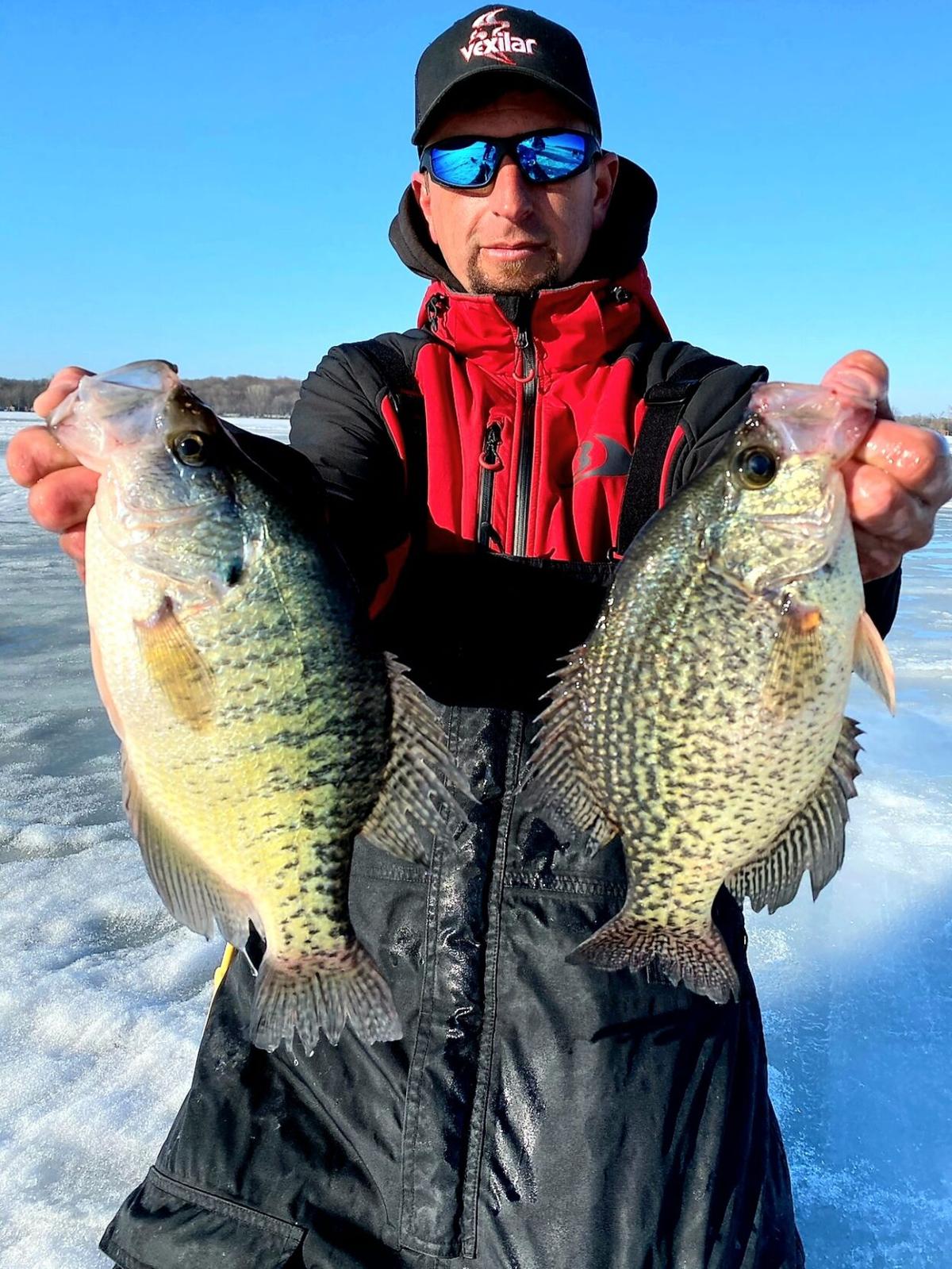 Fishing Guide Adam Griffith holds up a black and white crappie. Griffith’s expertise in large crappie has propelled him into a career as a fishing guide. 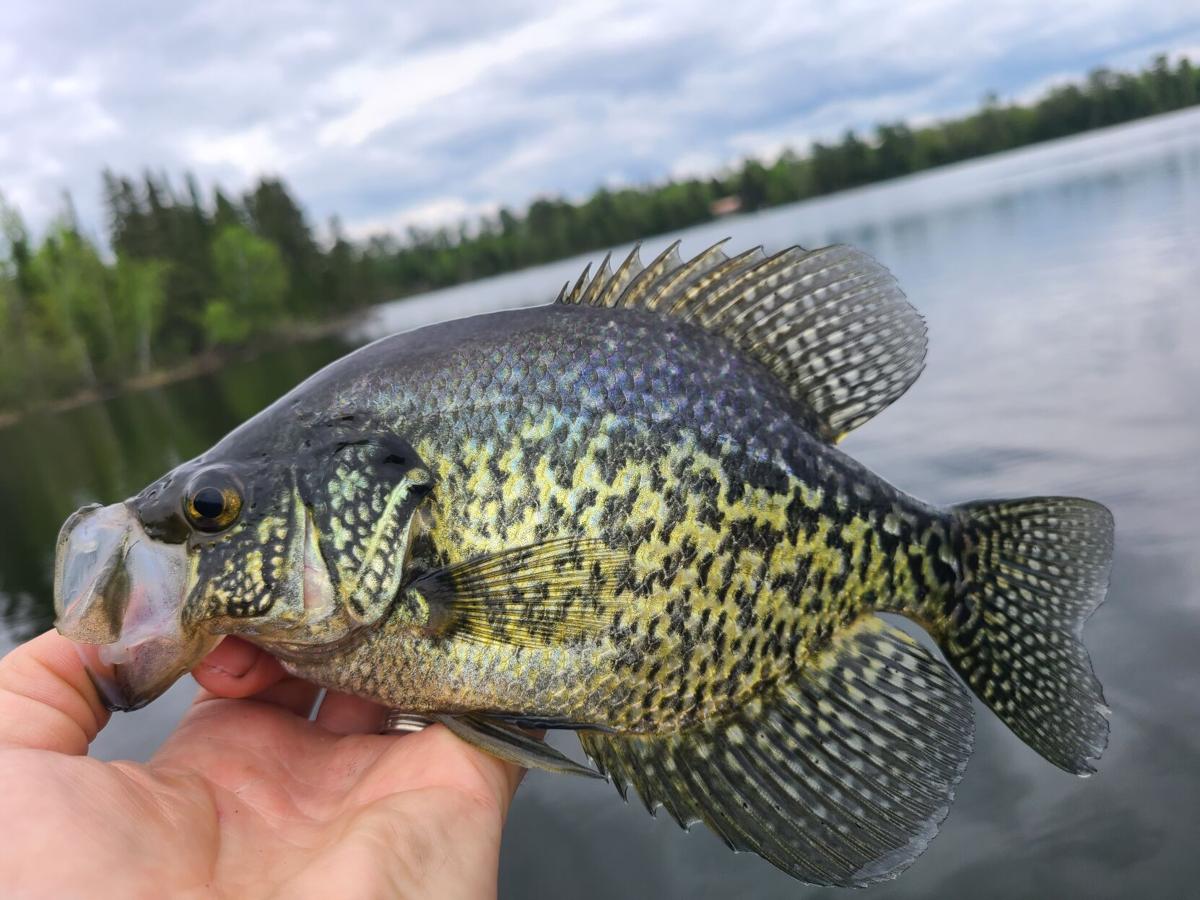 Crappies are on the spawn, says fishing guide Adam Griffith. Warm spring days have heated up local lakes and, with it, the crappie fishing.

Fishing Guide Adam Griffith holds up a black and white crappie. Griffith’s expertise in large crappie has propelled him into a career as a fishing guide.

Crappies are on the spawn, says fishing guide Adam Griffith. Warm spring days have heated up local lakes and, with it, the crappie fishing.

Adam Griffith has gone from blue collar to black crappie.

After years of working in the construction trades, Griffith has made the move to full time fishing guide.

Fans of YouTube fishing content will recognize Griffith from a miniseries from last winter, “The Crappie Chronicles,” produced with fellow friends and fishing fanatics Adam Bartusek and Matt Waldron.

“The Crappie Chronicles” miniseries trailed the trio through the greater Minneapolis-St. Paul Metropolitan area, tackling and catching giant black and white crappies in fisheries hidden in plain sight, no small task for anyone but panfish devotionals.

Griffith follows crappies year round and had some great advice for people hitting the water for crappies this week and into the fishing opener.

“Right now, with water temperatures from 52-57 degrees, these fish are pushed forward,” Griffith told me.

As Griffith sees the daily movements of crappie, he’s well in tune with their comings and goings, and puts his clients on fish quickly.

“They’re not moving in and out like they were before,” he said. “The males were up shallow near nest sites, and the females were about 10 feet from them, staged on the weedline. They’re spawning, but there are a lot of fish still coming from the deeper water.

“They’re coming in waves. The males don’t really leave, but new females come in. I am catching them in one to four feet. The majority of the dark, dark males are in like a foot to 2 1/2 feet, on the beds and ready to go.”

Griffith said he’s catching females that are still fat and some that are skinny, signaling that some females have already laid their eggs and left.

“I throw a rocket bobber if it’s not too windy,” he said. “If the wind is howling, you get a lot of drag that will pull that setup off fish. If it’s windy, I’ll go with a foam pencil cork with a weight on the bottom. Those seem to not be pushed by the wind as much.

“You can really slow your presentation down. I use a 1/32-ounce jig with a Bobby Garland baby shad or a two-inch Berkley Gulp minnow.”

With a boat full of rigged rods, Griffith is ready for whatever conditions the day brings.

Small finesse plastics are his choice, helping him keep hooks in the water and spending less time reaching into bait buckets.

Griffith finds value in the learning process as much as how many fish his clients catch.

“The guiding life has been really fun,” Griffith admitted. “I’m just enjoying getting time with people and meeting clients. When you watch people ‘get it,’ it’s really rewarding.

“Like you might have someone that’s never fished crappies before, or have only crappie-fished one or two times in their life. You watch them at first and you are telling them ‘you got one’ because they don’t even see the bite. By the end of the day, they’re telling me I got one. I like seeing that, and I like teaching people. It’s fun getting out with friends and clients and getting after it.”

Griffith has great advice for anglers of all experience levels and abilities.

“Get out there and don’t be afraid to learn,” he shared. “You should be learning every time you fish. I’ve been fishing my entire life since I was a little kid, and I try to learn something every time I’m on the water. In the end, it’s going to make you a much better angler.”

As spring progresses and the crappies slide out deeper and into summer patterns, Griffith will be following them as a year-round crappie fanatic.

To learn more about crappie fishing or to book a trip with Adam Griffith, check out Griffith Outdoors on Facebook or email him at griff2205@yahoo.com.