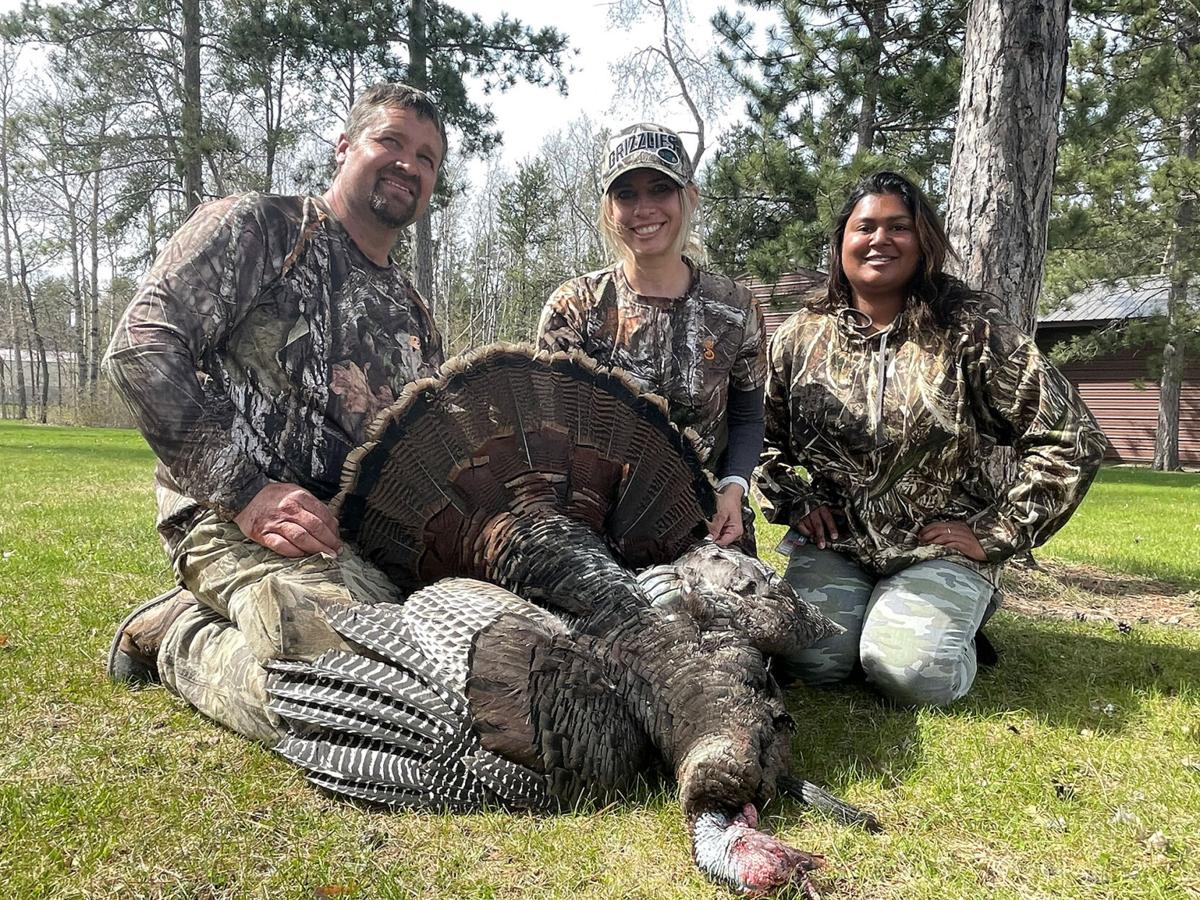 Left: Mentor Nate Thom (left) and new turkey hunters Dawn McShinsky (center) and Rya Stone pose with Dawn’s first bird, a 2-year-old tom. An early afternoon walk into new woods worked out as the trio ‘struck up a gobbler’ and watched it march into range, looking for a hen, a short time later. Above: Jim Specht and mentor Greg Kvale hold up Jim’s first wild turkey, a tom taken in the Brainerd lakes area. 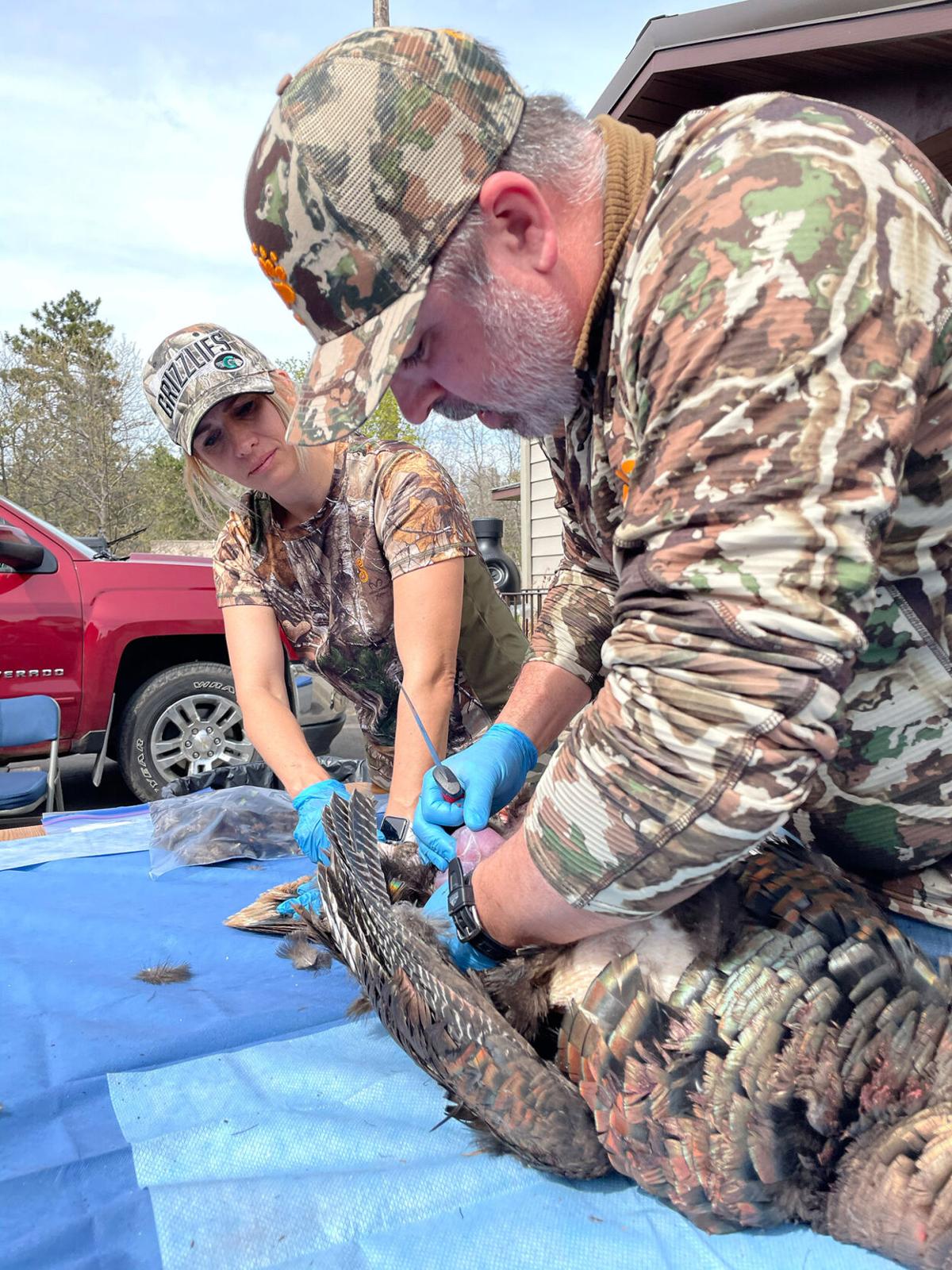 Besides learning to hunt, new turkey hunters learn how to prepare their birds for meals and cleaning after harvest. Dawn McShinsky helps as expert wild game chef and hunter Jamie Carlson prepares to cut out breast meat. 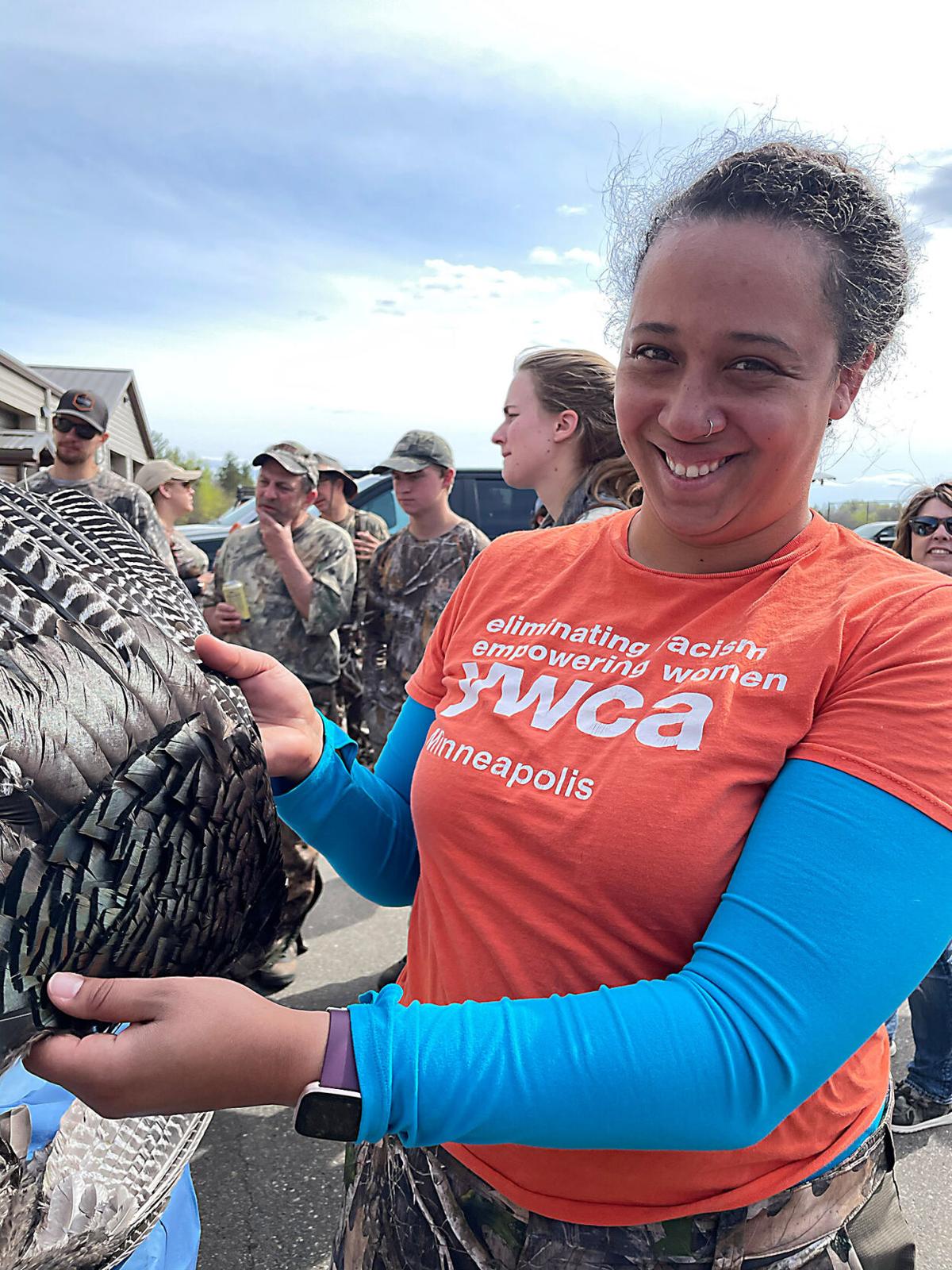 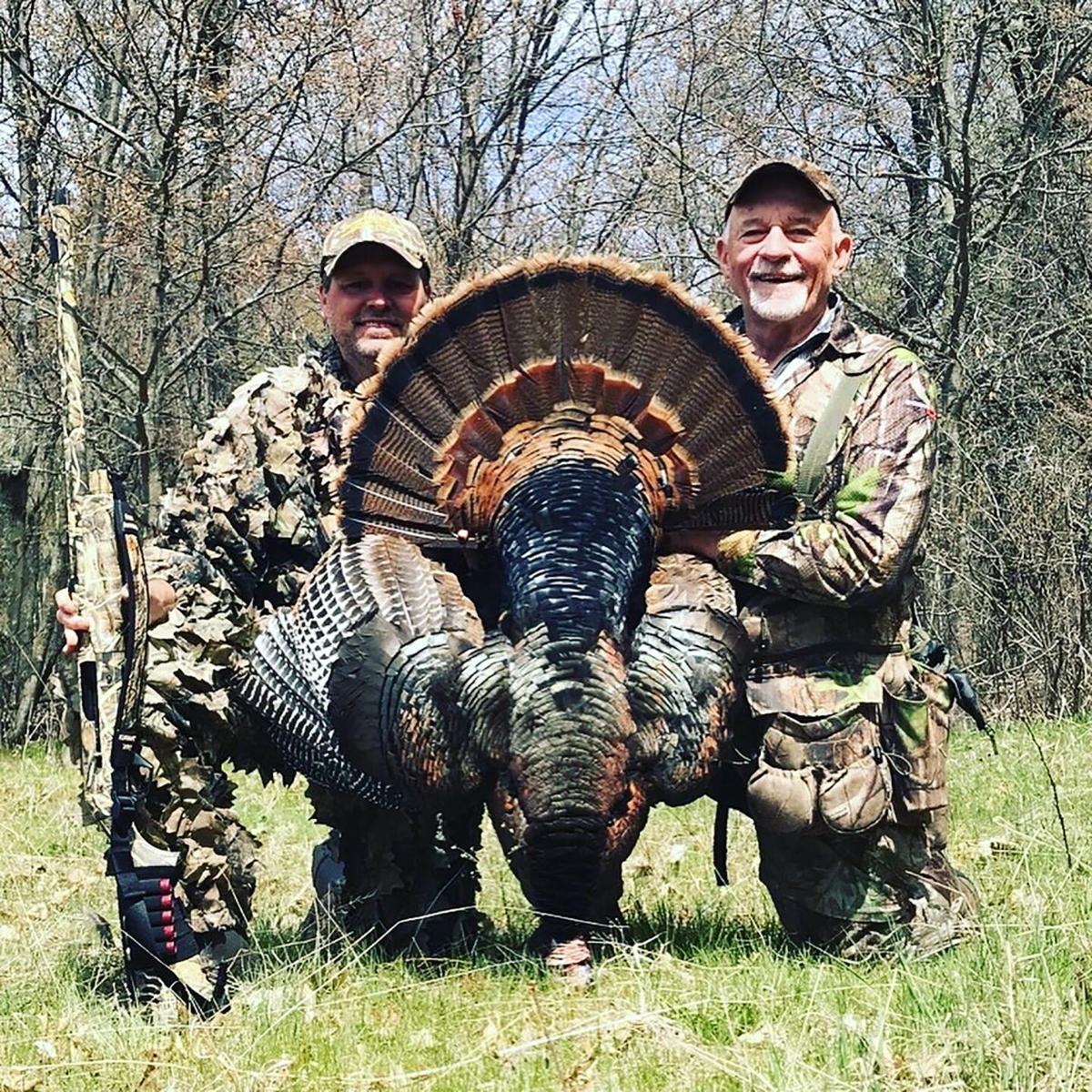 Left: Mentor Nate Thom (left) and new turkey hunters Dawn McShinsky (center) and Rya Stone pose with Dawn’s first bird, a 2-year-old tom. An early afternoon walk into new woods worked out as the trio ‘struck up a gobbler’ and watched it march into range, looking for a hen, a short time later. Above: Jim Specht and mentor Greg Kvale hold up Jim’s first wild turkey, a tom taken in the Brainerd lakes area.

Besides learning to hunt, new turkey hunters learn how to prepare their birds for meals and cleaning after harvest. Dawn McShinsky helps as expert wild game chef and hunter Jamie Carlson prepares to cut out breast meat.

Opening the world of hunting to those who didn’t grow up in hunting families is a challenge.

There are barriers to hunting participation at varying levels; hunting has been a patriarchal activity passed down and primarily practiced in the United States by white men.

Huge swaths of people in today’s society are missing the chance to get afield and hunt, simply because it wasn’t something into which they were born.

But as baby boomers reach their golden years, fewer and fewer take to the woods each year. Worse yet, younger generations are not picking up the slack as Boomers age out, a fact that fish and wildlife management agencies and the hunting industry have tracked and tried to address for over two decades.

The R3 movement — efforts to recruit, retain and reactivate hunters — is ongoing from hunting conservation groups and fish and wildlife management agencies, however, results are mixed and hard to track due to data privacy laws.

It’s a battle to reverse a trend with numbers going in the wrong direction with programs that are often not big enough, scalable enough or welcoming and visible enough to new recruits.

Increasing urbanization, a more diverse populace with less access to the outdoors, less free time for adults and families, and the rise in technology and its overstimulation and instant gratification might be a few reasons for fewer hunters, but there are real consequences to fewer hunters.

The loss of connection to the land and your food, loss of habitat and conservation funding that hunters provide, and loss of the culture of hunting all have profound impact on society.

Any challenge, flipped on its head, is an opportunity. Women and people of color are vastly underrepresented in hunting and could help stem the tide of declining participation. Urban locavores have responded favorable to the opportunity to gather their own meat; it doesn’t get more free range than wild game.

Still, for many new hunters, there are challenges in knowing how to get started. Without an invitation to hunt from family or friends, they have a hard time getting into the sport. There is after all, a difference between information and instruction.

The answer is not to do nothing, even if R3 efforts are up against a wall. Immersive and welcoming hunting instruction with mentors is needed.

In 2009, Mark Norquist answered the call with an idea on how to bridge the gap between aspiring hunters and the information and mentors they need. Norquist started Modern Carnivore, a website that is a veritable clearinghouse of information for new hunters, anglers and foragers and ultimately an idea: when people form a relationship with their food and understand where it comes from, they live healthier lives and promote a healthier planet by nurturing wild places.

“Modern Carnivore’s mission is to introduce adults with no background in hunting to the joys of an outdoor lifestyle,” Norquist told me.

Modern Carnivore works to awaken the hunter within and has transitioned to leading instructional hunting camps, after initial success in hosting an upland hunting series with volunteers from Pheasants Forever and other events across Minnesota. The Modern Carnivore upland series was so successful, others took notice.

Todd Roggenkamp, Assistant Director of Education for Safari Club International Foundation, approached Norquist at the 2020 Pheasants Forever Pheasant Fest in Minnesota to talk about partnering on future R3 efforts. The men’s conversation turned into a year-long planning effort with turkey hunting as the focus.

With Norquist growing up in Brainerd and Roggenkamp living in Breezy Point, the pair decided on a turkey hunt in the Brainerd Lakes area, a region with a relatively new but expanding turkey population and many tracts of public lands.

The endeavor was impressively pulled off remotely during a global health pandemic.

Roggenkamp says his organization, SCIF, works to ensure the future of wildlife through conservation, education and hunting, and the hope moving forward is that the partnership with Modern Carnivore will lead to additional hunting camps and involvement of SCI chapters to support endeavors to continue introducing new hunters to hunting.

“Partnering with Modern Carnivore is a great example of two organizations joining together to provide hunting opportunities for new hunters and teaching them the process of providing a natural food source for themselves while supporting conservation,” Roggenkamp said. “It’s a win-win all the way around.”

Norquist feels the same looking back at the success of the Turkey Camp Mentored Hunt.

“By partnering with an organization like the SCI Foundation, we’re able to bring experiences like this hunting camp to more people,” Norquist said. “It’s really rewarding to see the positive impact it has on each new hunter and also the larger hunting community.”

Mentees from the Brainerd Lakes Area Turkey Camp Mentored Hunt reported favorable first hunting experiences with everyone hearing gobbles, many participants seeing birds and a few notching their first turkey hunt kill tags. It may be the start of an annual event, with the hope that mentees get the hang of the hunt and carry on in the future, all with a support system of long-term mentoring available through Modern Carnivore.

Getting help for more than just a weekend is key to helping new hunters stick with it. If every hunter mentored one person each year, participation trends wouldn’t be in decline.

Active hunters: consider it your wake-up call. If you love the outdoors, pay it forward and pass it along to someone new this year.

Interested or curious about hunting but unsure how to get started? Check out modcarn.com and sign up for Hunting Camp Live.