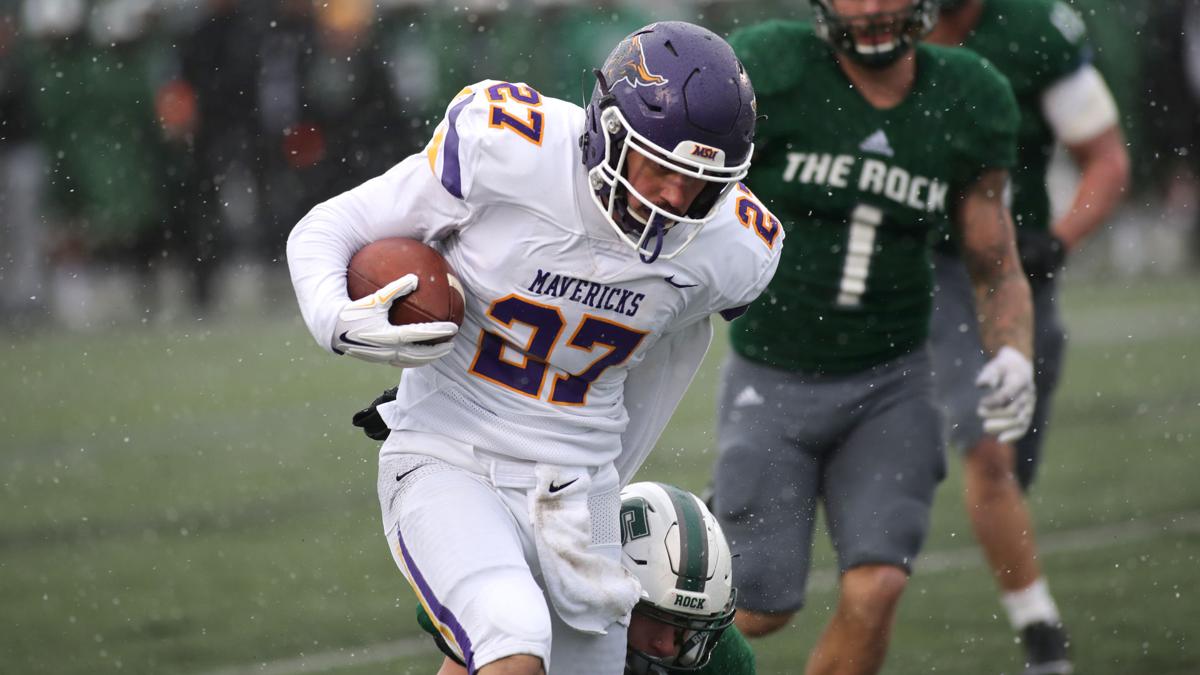 Minnesota State’s Justin Arnold scored on a 20-yard run right before halftime, making it 30-8, and helping the Mavericks win the national semifinal game 58-15 over Slippery Rock at Slippery Rock, Pa. 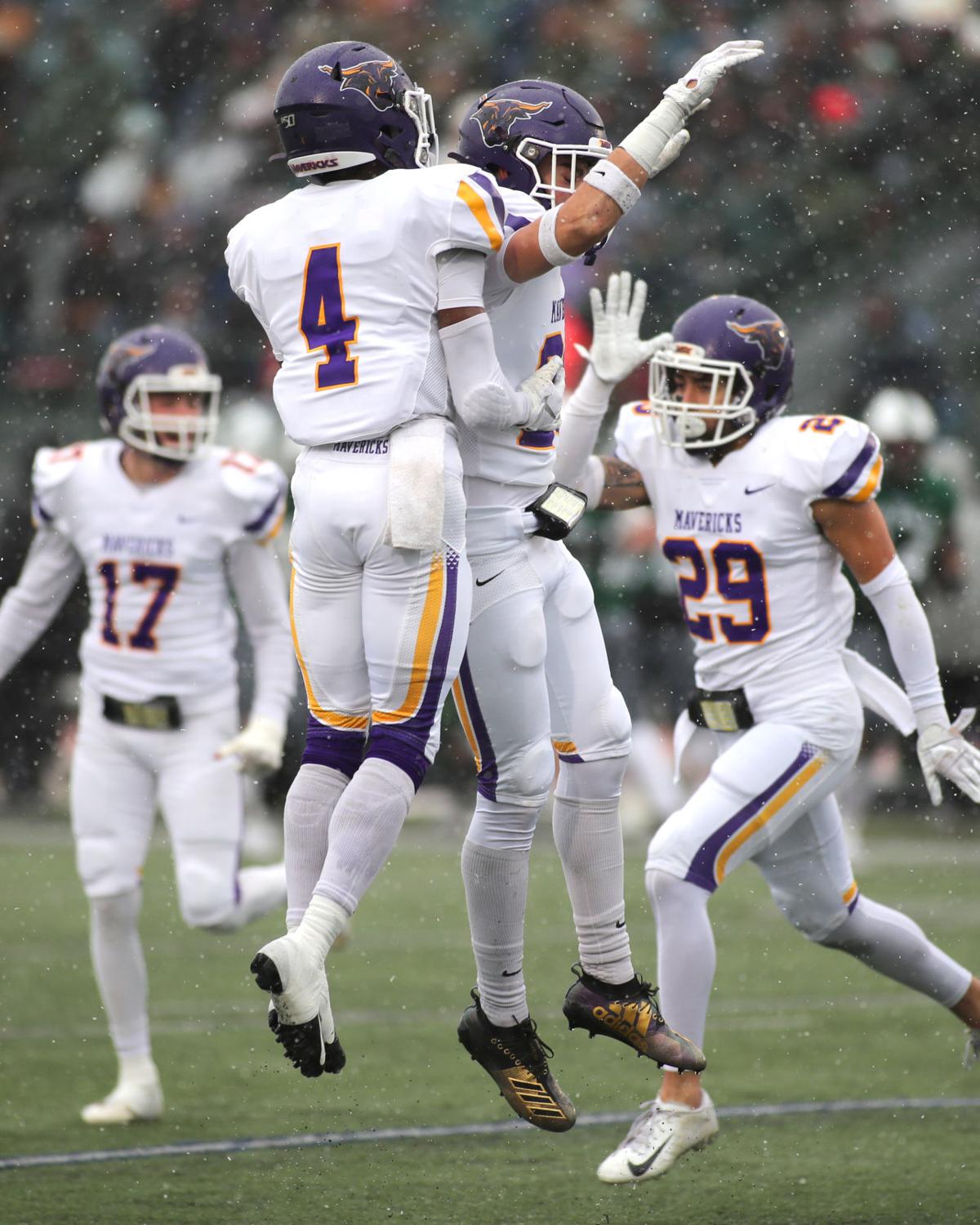 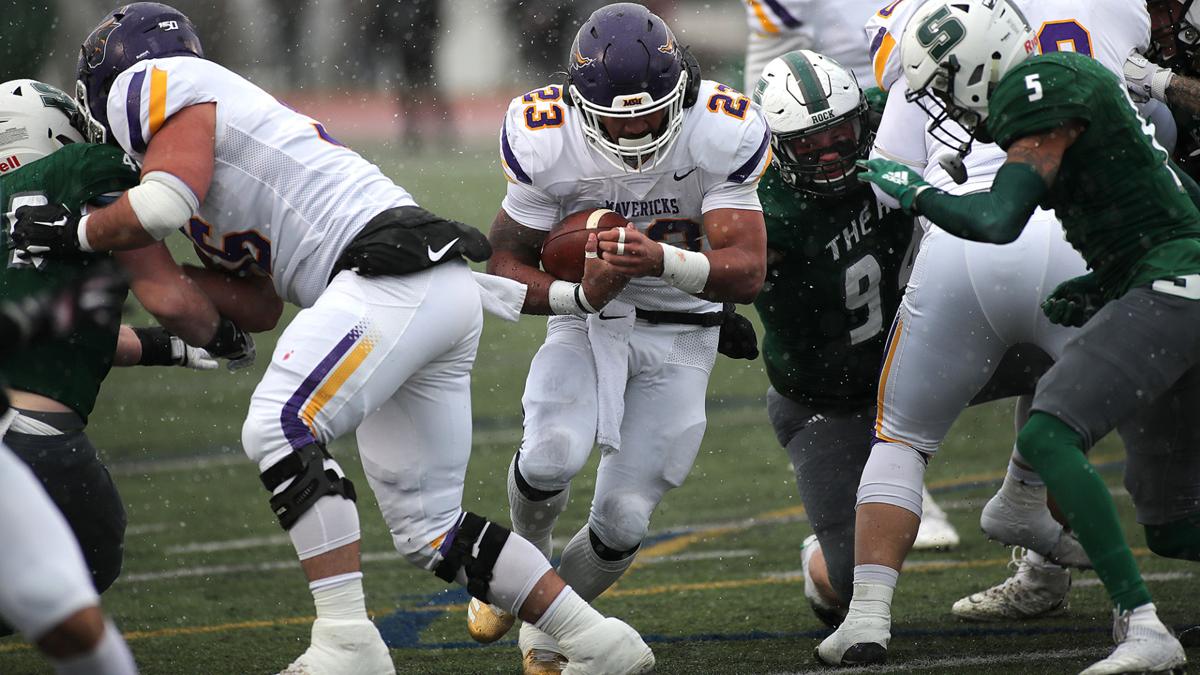 Minnesota State running back Nate Gunn bulls his way through the Slippery Rock defense. He scored three touchdowns in a 58-15 victory.

Minnesota State’s Justin Arnold scored on a 20-yard run right before halftime, making it 30-8, and helping the Mavericks win the national semifinal game 58-15 over Slippery Rock at Slippery Rock, Pa.

Minnesota State running back Nate Gunn bulls his way through the Slippery Rock defense. He scored three touchdowns in a 58-15 victory.

If you do both, you play for the national championship.

“The defense was exceptional,” Minnesota State coach Todd Hoffner said. “The offense made a bunch of big plays. That’s what it takes to win playoff games.”

Minnesota State totaled 463 yards, averaging 8.9 yards per play, and bottled up Division II’s highest-scoring offense in a 58-15 victory over Slippery Rock in the NCAA semifinals Saturday.

The Mavericks scored first, taking advantage of a short field caused by Cole Schroedermeier’s interception. Nate Gunn got the touchdown on a 5-yard run, and Brevin Kaiser ran in for the two-point conversion.

After Slippery Rock scored on a long drive to tie the game at 8, the Mavericks scored again in the first quarter, driving into the wind and snow. This time, Gunn capped the drive on a 2-yard run.

The Mavericks then bottled up the high-powered Slippery Rock offense, which led Division II in scoring at more than 48 points. On the first play after a short punt, J.D. Ekowa passed 27 yards to Shane Zylstra for the touchdown.

“We’ve played in conditions like this before so it wasn’t a big deal to us,” Zylstra said. “You try to control the controllables and play your game, and that’s what we did.”

Minnesota State added another score before halftime, taking advantage of a muffed punt. On the first play, Justin Arnold ran untouched around the end on a jet sweep, and the Mavericks led 30-8 at halftime.

After Slippery Rock turned an interception into a short touchdown pass to cut the lead to 30-15, the Mavericks exploded for three touchdowns in less than 7 minutes. Ryan Schlichte hit Zylstra with a short slant that turned into a 73-yard score, Gunn rushed 11 yards for his third TD and Kaleb Sleezer bolted for a 75-yard run that made it 51-15.

In the fourth quarter, Nyles Williams scored on a 12-yard run against a demoralized defense.

The Mavericks passed for 250 yards, which was 51 yards more than Slippery Rock’s ballyhooed air game amassed, and ran for 213 yards. Schlichte completed 5 of 7 passes for 178 yards, with Zylstra making four catches for 152 yards.

“We always play with a chip on our shoulder,” Zylstra said. “Winners focus on winning, and we did everything we had to do today to be successful.”

“The defensive line was the difference today,” senior linebacker Zach Robertson said. “I don’t thank that quarterback has seen pressure like today. Everyone was talking about the No. 1 offense vs. the No. 1 defense. We wanted to make a statement, and we did.”

The Mavericks (14-0) will play for the national championship on Saturday, Dec. 21, at McKinney, Texas, against West Florida, which defeated Ferris State 28-14 in the other semifinal Saturday.

The Mavericks’ only national championship appearance came in 2014, losing to Colorado State-Pueblo.

“I’m really excited for Minnesota State and MSU athletics and the whole Maverick Nation,” Hoffner said. “To play in a national championship game is special, and we’re excited to represent our university on this big stage.”