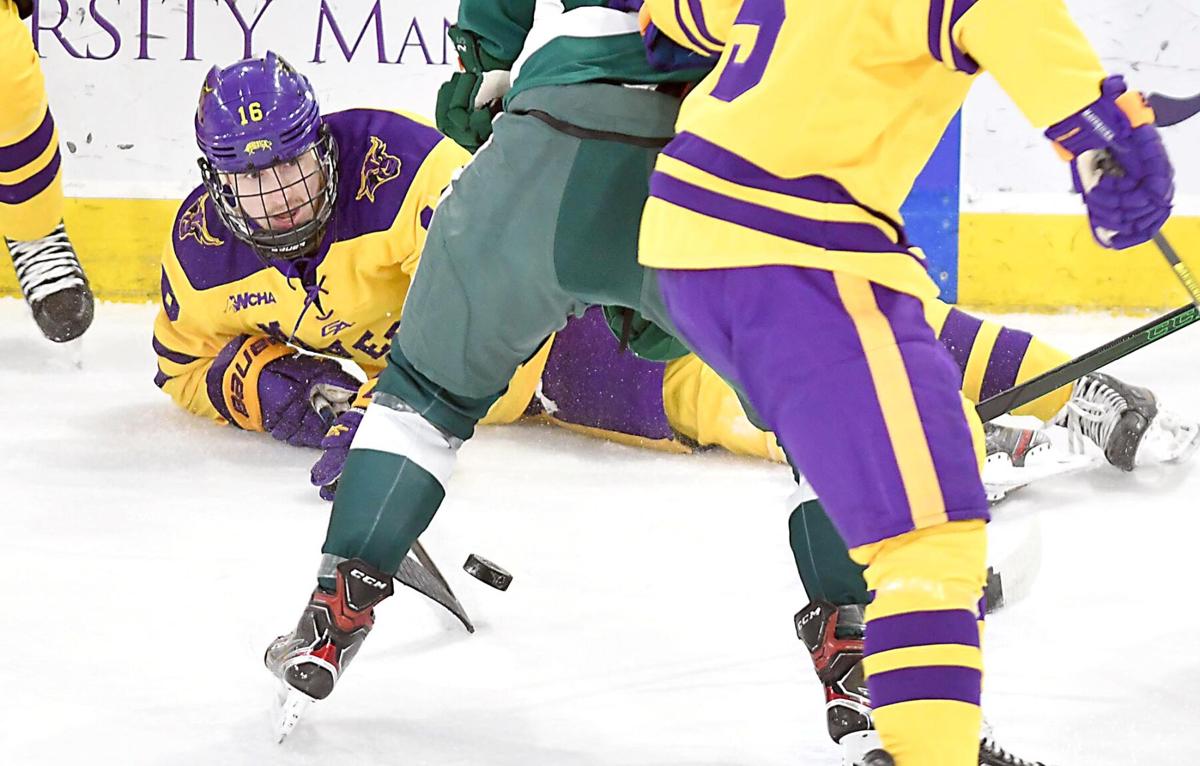 Minnesota State’s Reggie Lutz plays the puck from the ice during the first period against Bemidji State on Thursday at the Mayo Clinic Health System Event Center. 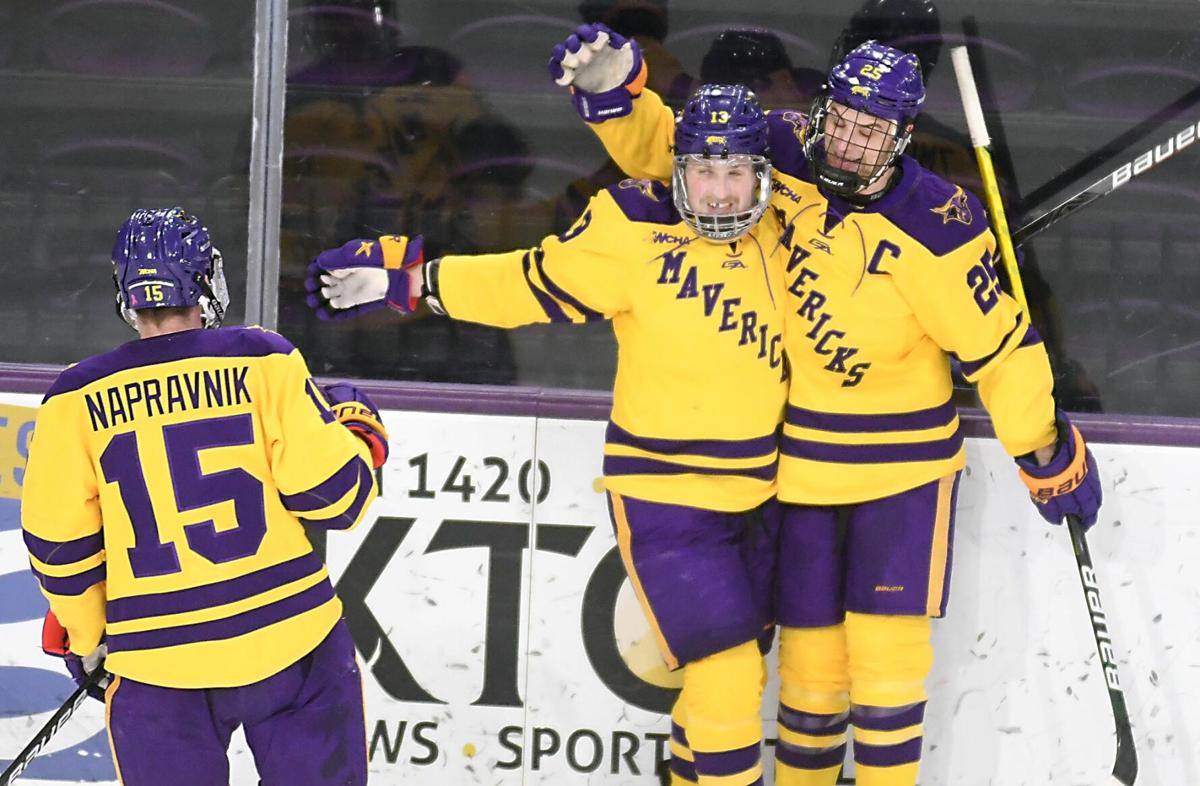 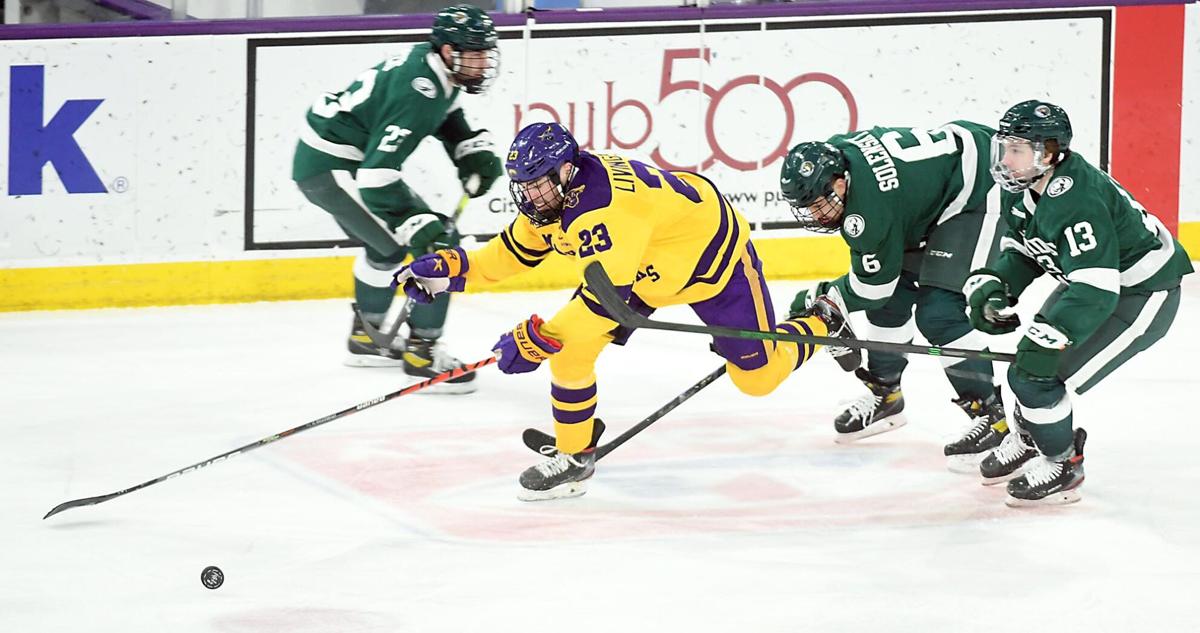 Minnesota State’s Jake Livingstone charges ahead of a pair of Bemidji State players during the second period Thursday at the Mayo Clinic Health System Event Center.

Photos by Pat Christman
1 of 3

Minnesota State’s Reggie Lutz plays the puck from the ice during the first period against Bemidji State on Thursday at the Mayo Clinic Health System Event Center.

Minnesota State’s Jake Livingstone charges ahead of a pair of Bemidji State players during the second period Thursday at the Mayo Clinic Health System Event Center.

But four straight MacNaughton Cups — that had never been done in the WCHA.

After struggling with Bemidji State all night, the Mavericks finally got past the pesky Beavers 4-3 in overtime Thursday at the Mayo Clinic Health System Event Center.

With the win, MSU was able to clinch its record-setting fourth straight MacNaughton Cup. It was the Mavericks’ fifth title in eight seasons. The Mavericks also clinched the No. 1 seed, and home-ice advantage, for the upcoming conference tournament, which begins March 12.

“Very blessed with this group, especially the seniors,” Hastings said. “I’m just happy for them because they put a lot of work into it.

“It wasn’t a Mona Lisa. At this time of the year, it doesn’t have to be. You’ve just got to win and move on.”

After the Mavericks had control for the entire third period with a 3-2 lead, the Beavers’ Alex Ierullo tied the game with 22 seconds remaining, firing a wrist shot into an open net after receiving a perfect carom from a shot that missed the net.

In overtime, the Beavers got several good looks, as MSU goaltender Dryden McKay was forced to make many big saves. The highlight came when McKay sprawled across the crease to make a pad save on Ierullo.

After Nathan Smith won a face-off in the final minute, Julian Napravnik circled the zone with the puck on his stick before trying to fire a cross-ice pass to Akito Hirose. The puck was tipped into the net before it could reach Hirose. Napravnik was credited with the goal.

After a slow start to the season that included a benching, it was a fitting moment for Napravnik, who now leads the team in points.

“I saw Kito back-door, but their stick did the job, I guess,” Napravnik said with a laugh. “I just got lucky there.”

After the first period ended in a 1-1 tie, MSU took control early in the second, scoring twice in the first two minutes. Brendan Furry scored 57 seconds in, and Andy Carroll made it 3-1 just 45 seconds later.

Furry has now scored in three straight games and was clearly one of MSU’s best players in the game. Furry spent last season practicing and rehabbing, as he was forced to sit out after initially signing with Niagara. He was also recovering from his second shoulder surgery in three years.

“When you’re away from the game that long, it’s hard to find your rhythm, because you can’t replicate games,” Hastings said. “Tonight he was an impact player.”

Todd Burgess finished with a goal and an assist for the Mavericks, while McKay made 23 saves in net. Shots on goal favored the Mavericks 29-26.

Mavericks face off against Bemidji State on Thursday. Follow the live blog here. Scroll down…