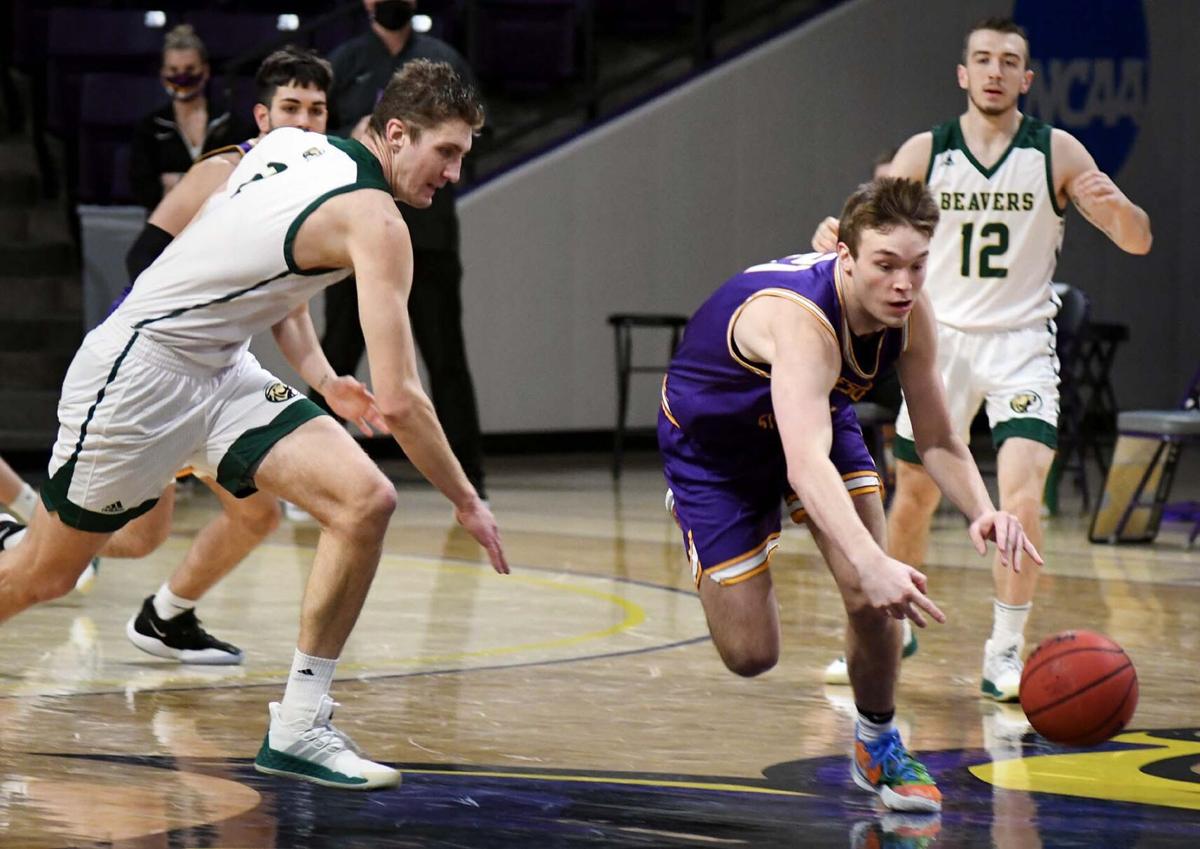 Minnesota State’s Brady Williams makes a steal during Sunday’s 91-67 victory over Bemidji State at Bresnan Arena. The Mavericks had eight steals in the game. 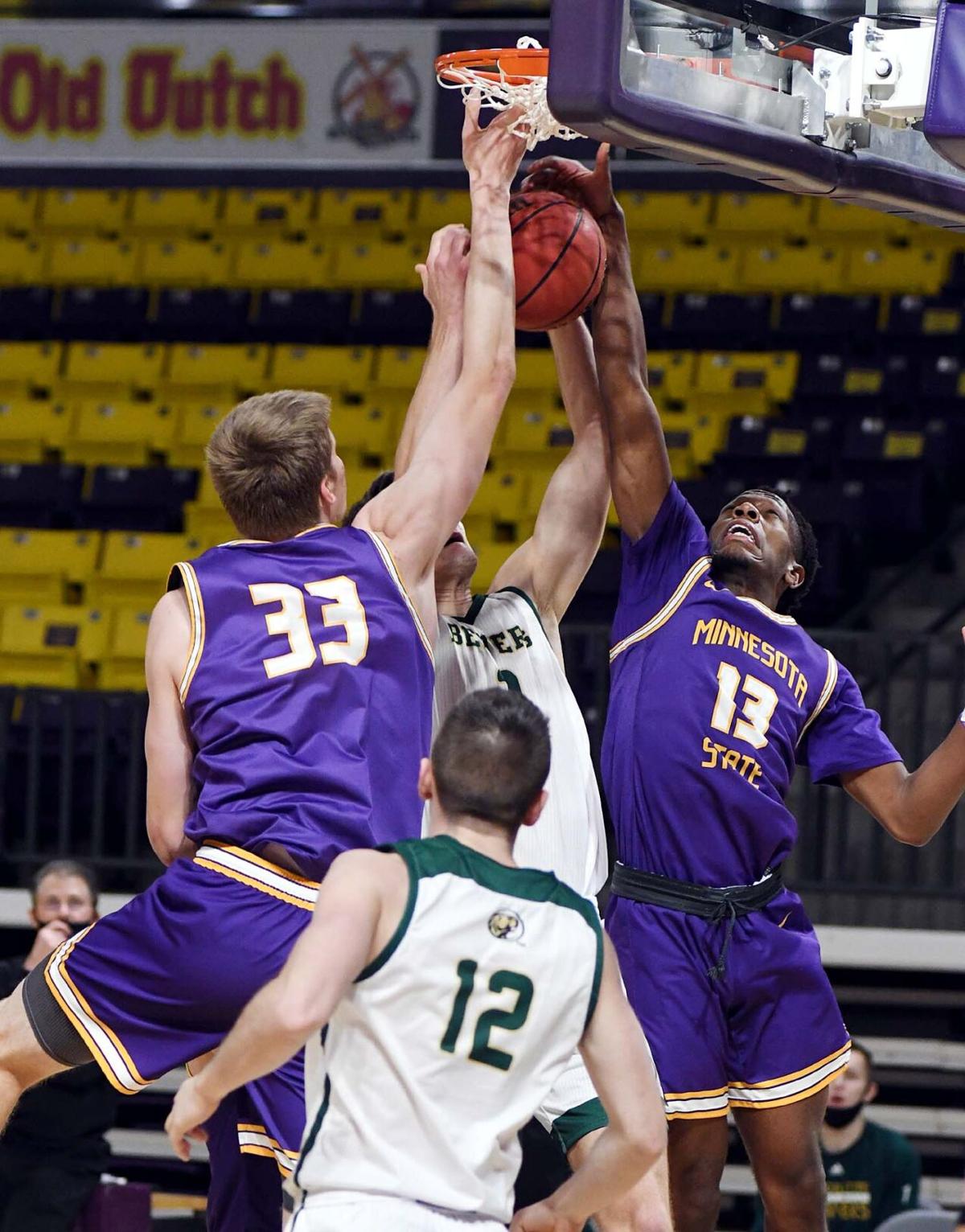 Minnesota State’s Brady Williams makes a steal during Sunday’s 91-67 victory over Bemidji State at Bresnan Arena. The Mavericks had eight steals in the game.

For the rest of his career, Minnesota State men’s basketball coach Matt Margenthaler will have a key piece of training video: play good defense, win games.

“I think I’m going to use it quite a bit,” Margenthaler said. “it was probably on our staff that we didn’t put the guys in better position to handle the ball screens (Saturday night), but we made some adjustments, and the guys did a great job.”

Despite a tough night shooting the ball Saturday, Margenthaler said afterward that he was more disappointed by the defense. The Mavericks allowed 45.3% field-goal shooting, were outrebounded by 4 and made only three steals in Saturday’s game.

On Sunday, Minnesota State held the Beavers to 43.9% shooting, were plus-13 in rebounding (allowing just three offensive rebounds) and had eight steals, setting the tone with defense that provided some much-needed energy to the offensive end.

“This was a good bounce back for us,” he said. “Our energy level was better. We defended a lot better. We took care of the basketball better, and to rebound the way we did, good things happen when you do those things.”

The game was tied at 18 with nine minutes remaining in the first half when Landon Wolfe’s 3-pointer started a 28-10 run into halftime. It was the opposite of Saturday’s first half, when the Beavers took the momentum into the break.

Quincy Anderson had seven of his 16 first-half points in the run, and Ryland Holt, who struggled early, added 10 points, including a tip-in that was actually batted in from 10 feet by a Bemidji State player.

“We’re a good team in transition so it’s better when we can get some stops that lead to our offense,” Anderson said. “We don’t want to be a team that needs to get points to feel good about ourselves.”

The second half was more of the same, every time the Beavers started to get some momentum, the Mavericks answered with a run. After making only three 3-pointers Saturday, the Mavericks had 10 on Sunday, with five in each half.

Malik Willingham scored 11 points in the first seven minutes of the second half, as the Mavericks pushed the lead to 67-37. A 12-0 run later in the half made it 86-53.

“Quincy is just a handful,” Margenthaler said. “He’s such a powerful scorer, at all three levels, and he defended a lot better. Malik is a walking basket. He got going tonight; sometimes you just have to let him play.”

“(On Saturday), our top three scorers were our worst defenders. Tonight, they were much better.”

Anderson ended up with 24 points and 11 rebounds, and Willingham scored 19 points, making 4 of 9 from 3-point range. Holt scored 15 points, and Devonte Thedford had 14 points.

“We can still do better,” Anderson said. “We’ve already talked about things we can improve on. This is a physical conference. Practices and scout work doesn’t do justice to the games. Every game is a fight, especially for us.”

The Mavericks (1-1) play their first South Division game at 6 p.m. Friday at home against Augustana, which swept its weekend games at Minnesota State Moorhead. Only division games will be counted to qualify for the Northern Sun tournament.

“This was a big win for us,” Margenthaler said. “It would have been devastating for us to go 0-2 at home. But I think you’re going to see a lot of splits in the league. We got it handed to us (Saturday night), and our guys played with a chip on their shoulder. You can’t get too high or too low. The toughest team will win.”