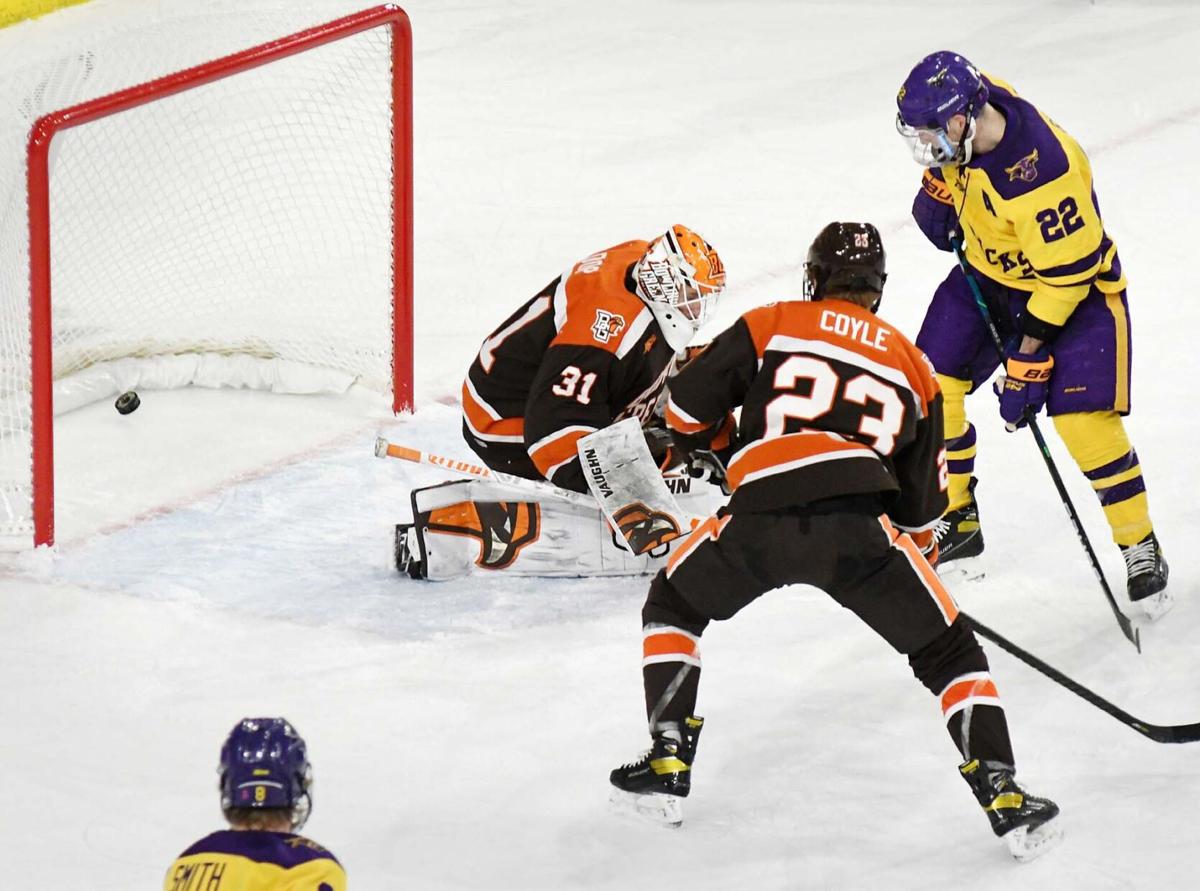 Minnesota State’s Dallas Gerads gets the puck past Bowling Green goalie Eric Dop at 18:00 in the second period Friday. 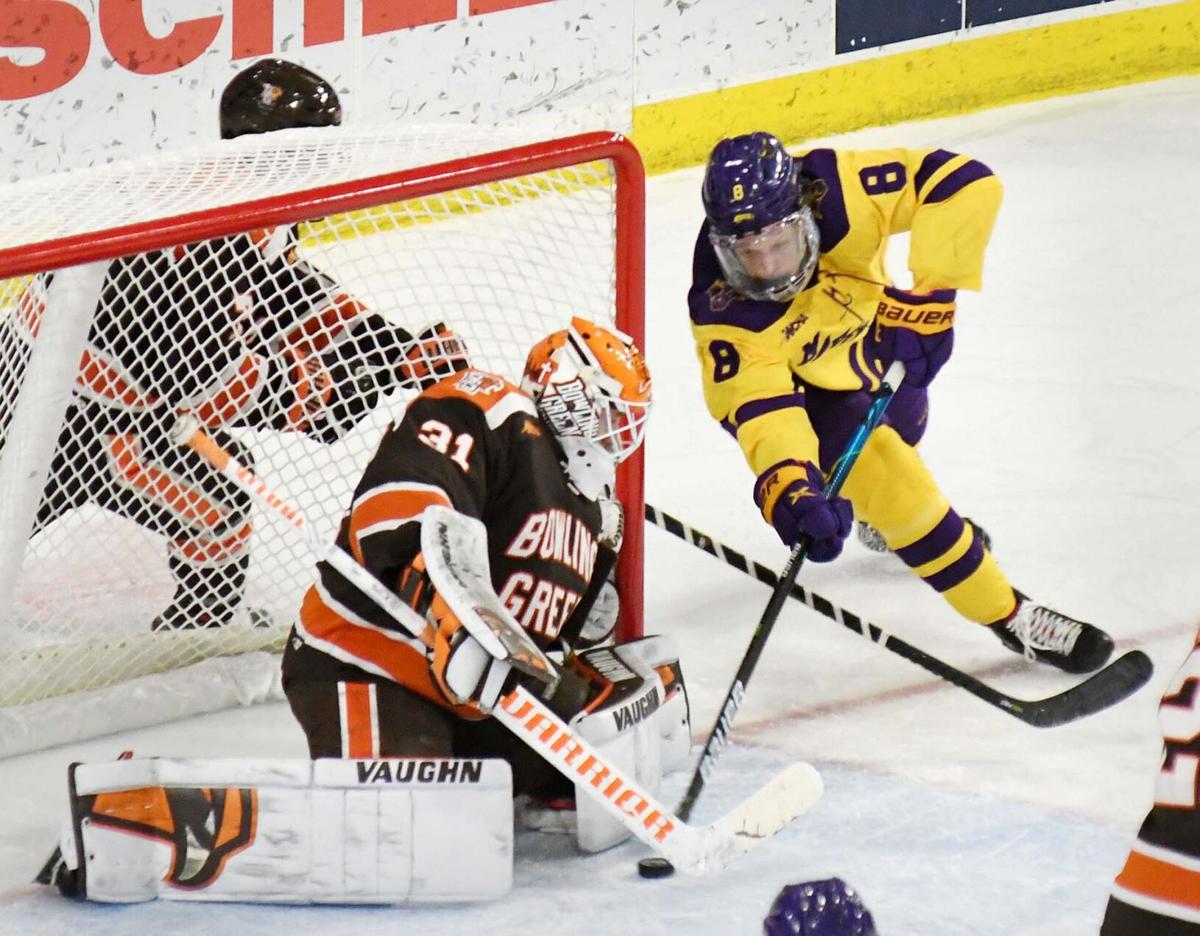 Minnesota State’s Nathan Smith tries to get the puck past Bowling Green goalie Eric Dop halfway through the second period on Friday. 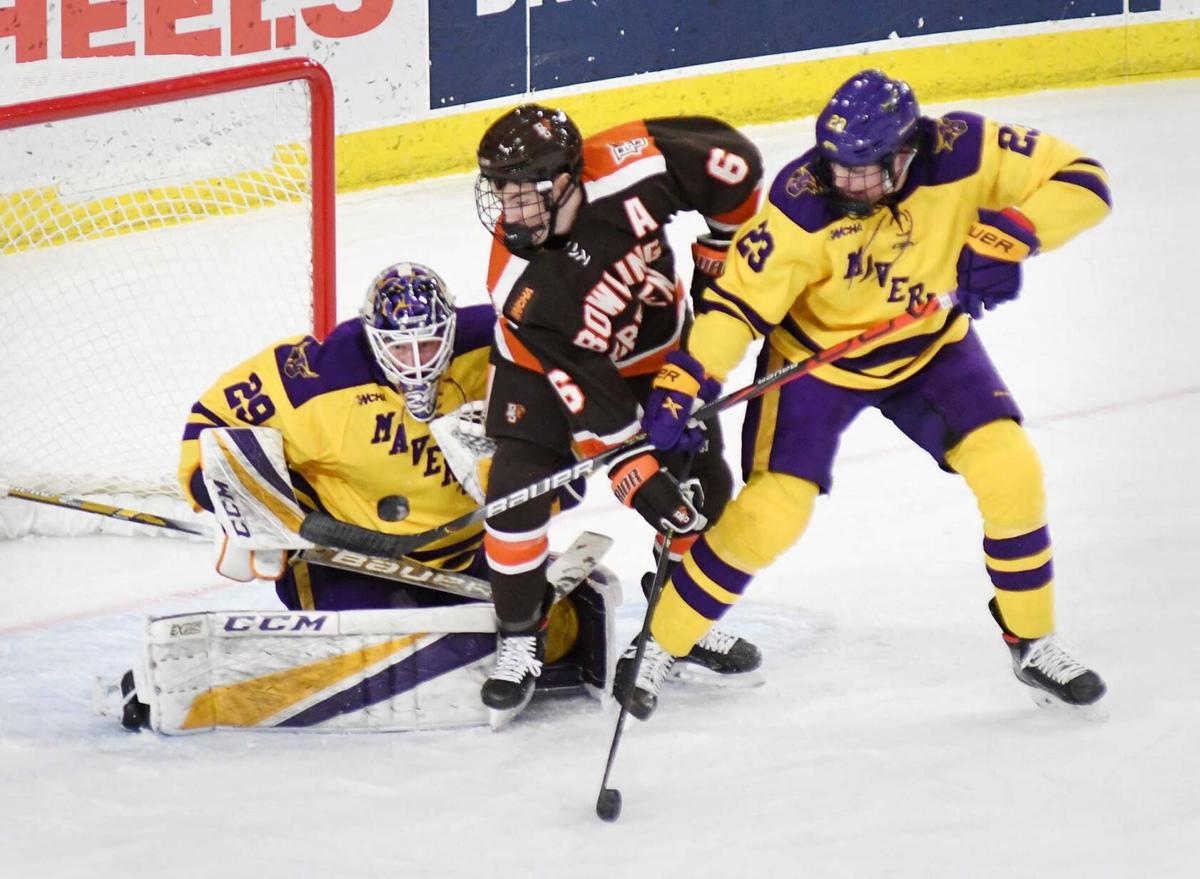 Minnesota State’s Dallas Gerads gets the puck past Bowling Green goalie Eric Dop at 18:00 in the second period Friday.

Minnesota State’s Nathan Smith tries to get the puck past Bowling Green goalie Eric Dop halfway through the second period on Friday.

As great as the Minnesota State men’s hockey team’s power play has been, there’s been something tough about the five-minute majors.

The Mavericks have had numerous chances in that scenario this season, but have noticeably struggled on most.

“I think it’s obviously the turning point,” Hastings said of majors. “I’ve found in my time behind the bench, a five-minute major is momentum. Can you get one or can you get two?”

Dallas Gerads got one with the extended man-advantage Friday as the Mavericks got a key 4-0 WCHA victory over Bowling Green at the Mayo Clinic Health Systems Event Center.

After Nathan Smith put MSU on the board at 12:45, the Mavericks got their chance to take control when the Falcons’ Alex Barber received a game misconduct for checking from behind at 14:18.

Gerads assumed his usual position in front of the goal and was able to tip Riese Zmolek’s shot past Falcons’ goalie Eric Dop.

“He’s a guy that’s standing in front of the net taking a beating,” Hastings said of Gerads. “That’s not a pretty area to go into.”

The momentum carried over into the third, as Walker Duehr put MSU up 3-0 at 8:46. Assists went to Akito Hirose and Andy Carroll.

Zmolek scored MSU’s final goal with an amazing individual effort. After gliding into the slot through multiple Falcons defenders, Zmolek tucked the puck past Dop with his backhand. It was his seventh goal in 121 games.

“It was good to see him get back on the offensive side of his game tonight,” Hastings said. “There’s such a difference when he’s in our lineup.”

MSU goaltender Dryden McKay has had a big week of national and conference recognition, and that continued on the ice Friday.

McKay made 30 saves en route to his seventh shutout of the season, and the 21st of his career. Michigan State’s Ryan Miller (1999-02) is the all-time NCAA Division l leader with 26 shutouts.

Early in the second, MSU was forced to kill a five-minute major when Reggie Lutz received a game misconduct for spearing. McKay made a massive save to keep the game scoreless before MSU ultimately took control just minutes later.

“Dryden was Dryden. He makes it look easier than it is,” Hastings said. “He made the ones he shouldn’t have made and then made the ones that he should have.

“I’m happy for him, because he’s put a lot of work into what he’s doing right now, and I need him to be as good or better tomorrow.”

Shots on goal favored the Falcons 30-29. Julian Napravnik and Jake Livingstone each finished with two assists, while Zmolek had a goal and an assist.