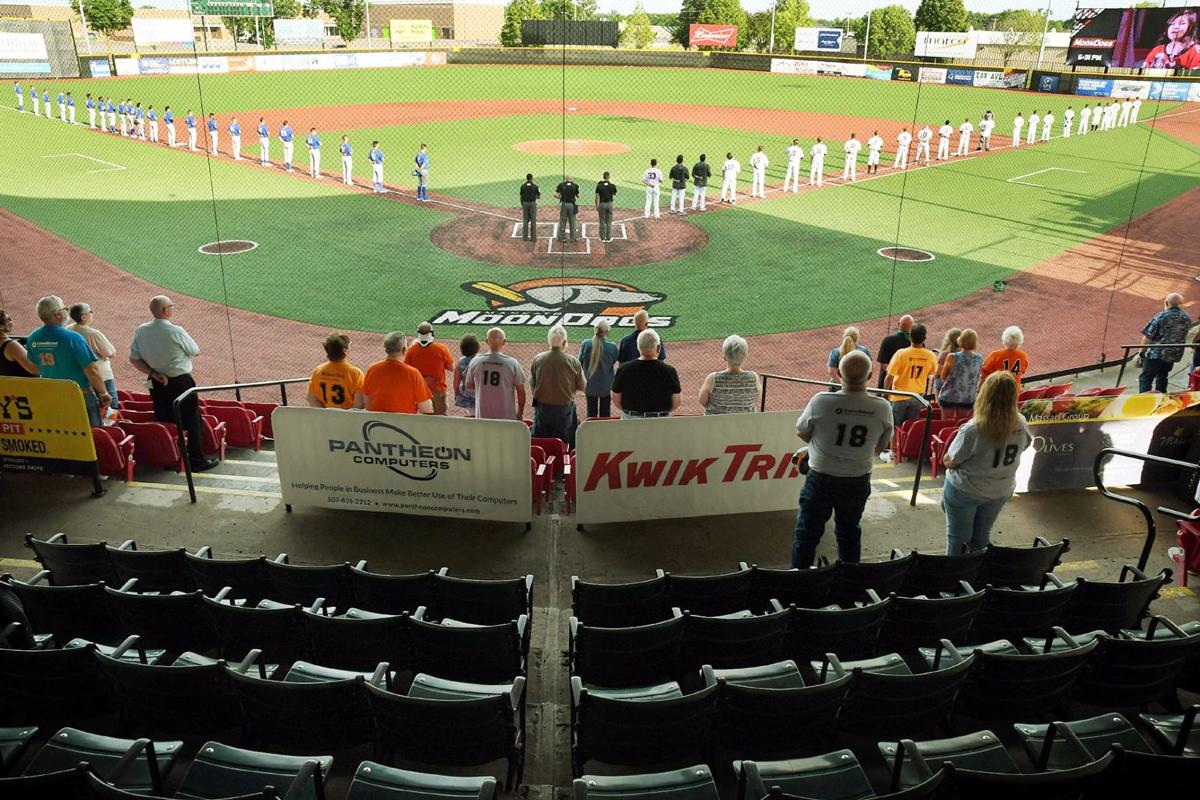 After having limited capacity and social distancing last season, the Mankato MoonDogs enter this season with no limits on the size of crowds at ISG Field. 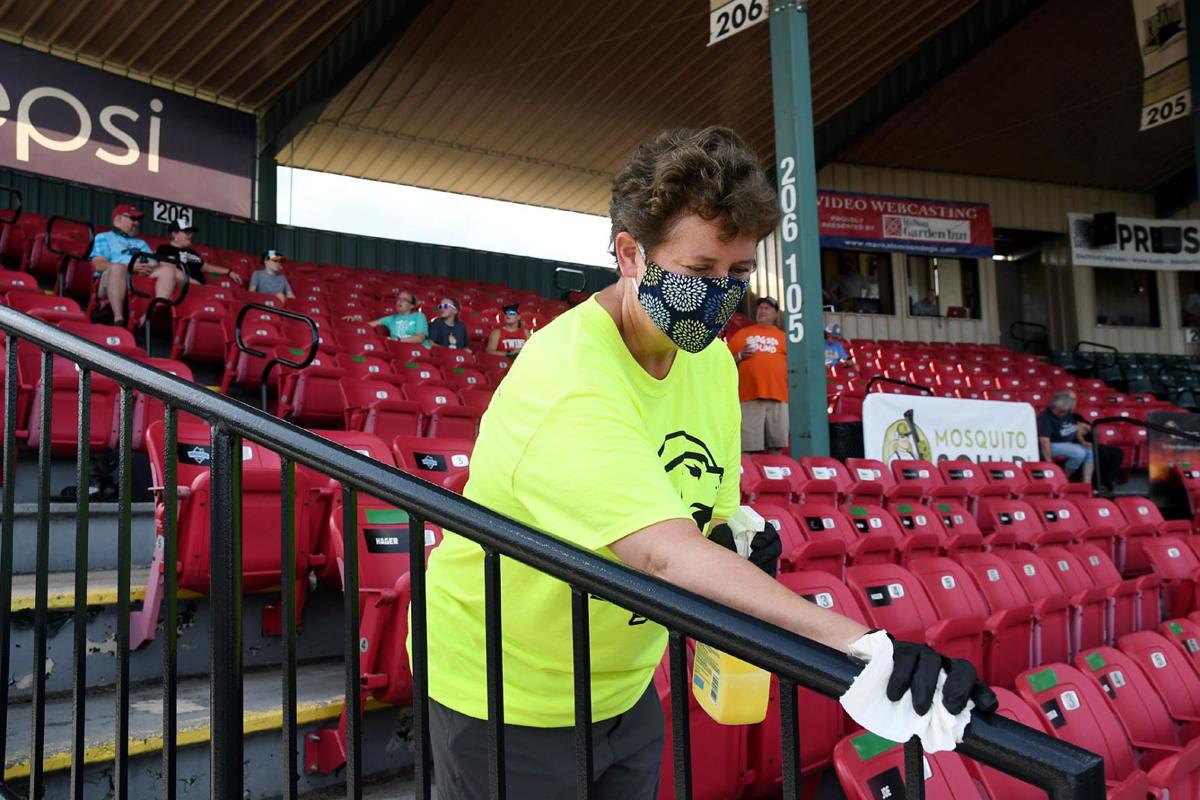 Darci Pendergast sanitizes railings at the MoonDogs’ opener last season, as fans sit socially distanced behind her. It’ll be a different scene Monday, as the club expects to have more than 1,000 fans in attendance.

After having limited capacity and social distancing last season, the Mankato MoonDogs enter this season with no limits on the size of crowds at ISG Field.

Darci Pendergast sanitizes railings at the MoonDogs’ opener last season, as fans sit socially distanced behind her. It’ll be a different scene Monday, as the club expects to have more than 1,000 fans in attendance.

A year ago at this time, the idea of 1,000-plus fans at a Mankato MoonDogs game wasn’t possible.

Heck, MoonDogs’ staffers spent last spring fiddling with tape measures just to figure out how to get 250 fans into the newly named ISG Field.

A year later, MoonDogs general manager Tyler Kuch and owner Chad Surprenant can confirm that there’s no need for tape measures in the grandstand area any longer.

The MoonDogs will have no attendance restrictions of any kind when the Northwoods League season begins Monday, paving the way for a return to normal for the club with the coronavirus pandemic waning.

Earlier this month, Gov. Tim Walz announced that capacity limits on Minnesota businesses would be lifted May 28.

“I know my local baseball friends, MoonDogs family and Northwoods League colleagues are all beyond excited to welcome in the 2021 season,” Surprenant said in a text message. “As always, we look forward to seeing our fans and finding new ones.”

Opening day will be Monday against the La Crosse Loggers at ISG Field, and Surprenant said the MoonDogs already have at least 1,000 tickets sold for the game.

Opening on a holiday tends to be tough, but Surprenant feels the team could still get to the 1,350 fans range for the opener, about what the club averaged in 2019.

“We were kind of hoping for at least maybe 50% capacity when the season opened ... we were never quite sure,” Kuch said. “We are beyond excited to get everybody back in the ballpark.”

The MoonDogs are hoping to do it up big for their opener, and that starts with an appearance from former Minnesota Twins manager Ron Gardenhire, who will throw out the ceremonial first pitch.

Gardenhire retired near the end of the 2020 MLB season, after a three-year stint as the skipper of the Detroit Tigers, and has enjoyed some time away from the game over the past nine months.

He sold his home in Minnesota and now lives in Fort Myers, Florida, but still visits his children in Minnesota, including his son Toby, who is the manager for the Twins Class AAA affiliate, the St. Paul Saints.

In his retirement, Gardenhire wants to give back to the game that’s given him so much, and Minnesota and the Northwoods League seemed like a great place to start. After the pregame ceremony Monday, Gardenhire will stick around and take in the game while mingling with some fans.

He’ll do the same at the Willmar Stingers’ and St. Cloud Rox’ home openers later in the week.

“MLB reached out and asked if I was interested in something like that — absolutely,” Gardenhire said. “It’s a perfect way for me to say thank you for all the support that the Twins have had, myself and my family.

“I’ve had the luxury of having a lot of really good things happen in Minnesota ... we appreciate the loyal support. Best fans in baseball as far as I’m concerned.”

As the MoonDogs try to ride the wave of Gardenhire’s opening-day appearance and a full ballpark, it’s still hard to know how attendance figures will end up this season.

Kuch acknowledged the team couldn’t sell tickets quite like it normally does throughout the spring due to the uncertainty surrounding capacities, but both Kuch and Surprenant have been extremely happy with the club’s corporate sponsors and feel their support is a sign of good things to come.

Despite the uncertainty, make no mistake, things are buzzing around the MoonDogs’ office, and they don’t expect it to slow down anytime soon.

“The phones have just been ringing off the hook,” Kuch said. “Now that we have those restrictions lifted, we can’t put the phone down quickly enough to get the next caller.”