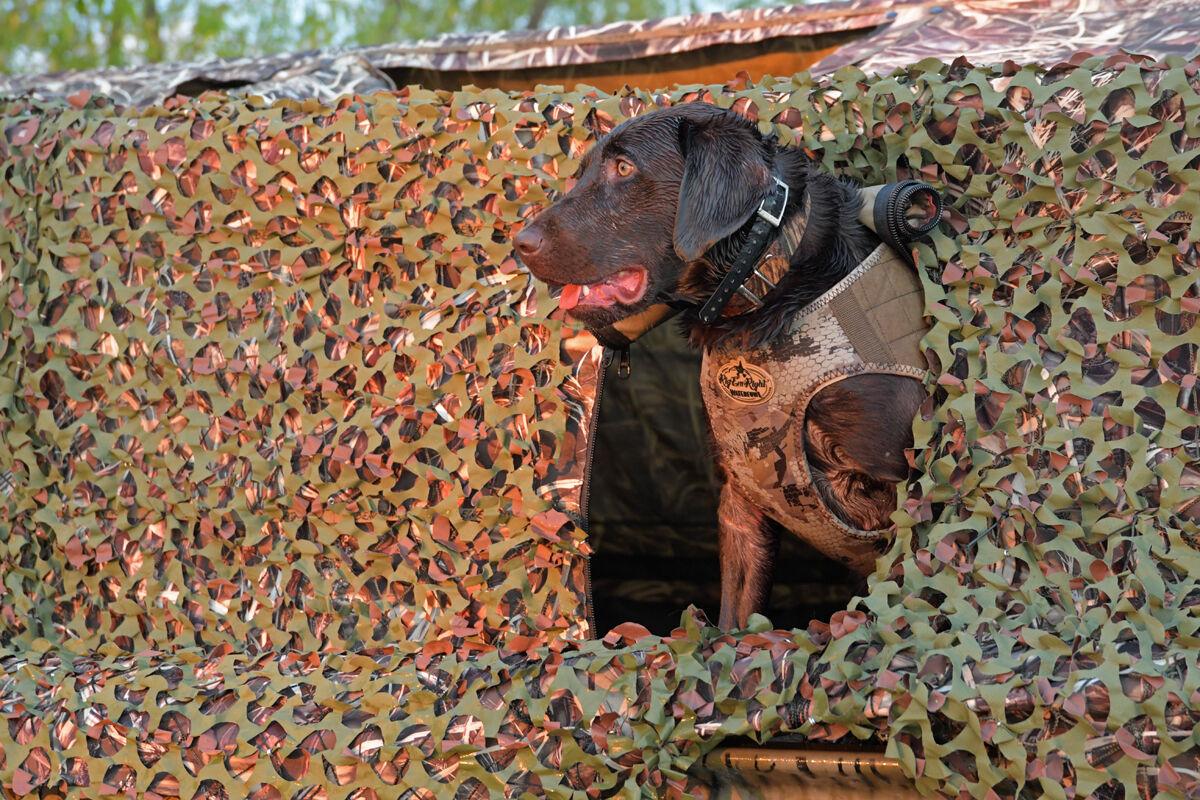 It appears this young dog could step right out of the blind. However, his owner smartly attached a leash, preventing unwanted breaking and turmoil during heated duck shooting. 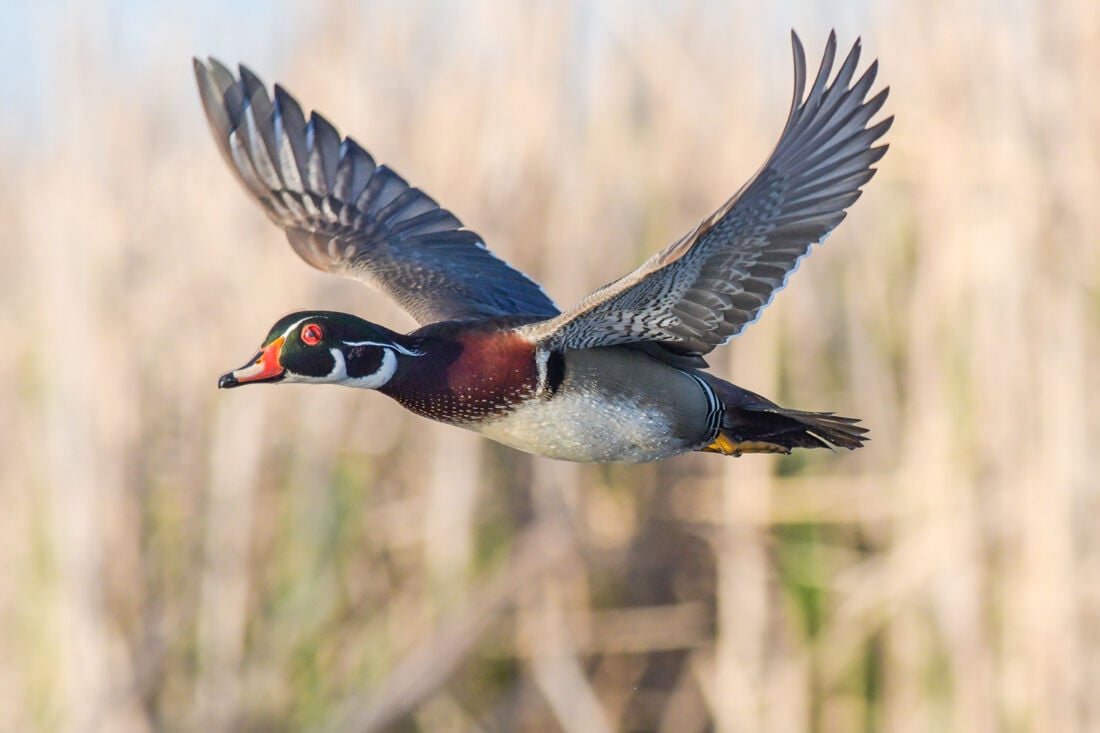 This will be a common sight for southern Minnesota’s opening weekend waterfowlers, colorful wood ducks speeding over decoys. 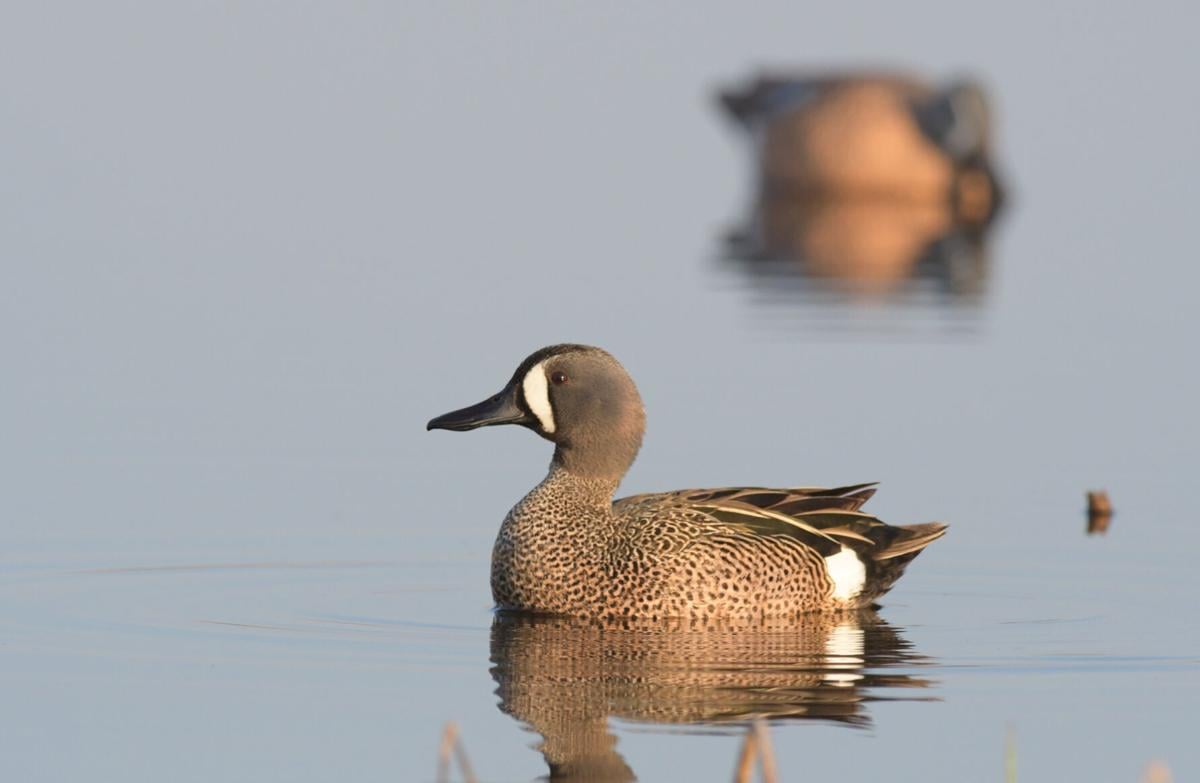 A drake blue-wing teal, still in bright breeding plumage, paddles past an early season hunter’s decoy. There should be plenty of these little ducks around when Minnesota’s season arrives on Sept. 26. 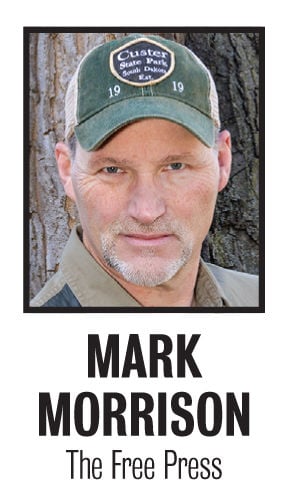 It appears this young dog could step right out of the blind. However, his owner smartly attached a leash, preventing unwanted breaking and turmoil during heated duck shooting.

This will be a common sight for southern Minnesota’s opening weekend waterfowlers, colorful wood ducks speeding over decoys.

A drake blue-wing teal, still in bright breeding plumage, paddles past an early season hunter’s decoy. There should be plenty of these little ducks around when Minnesota’s season arrives on Sept. 26.

The waterfowl forecast appears to be vastly improved this year, with reports of huge flocks of ducks being observed on early-season teal hunts in northern Iowa. I’ve received numerous reports on the teal season there ... all of them excellent.

Several die-hard waterfowling friends made many trips to chase the speedy little ducks on Iowa sloughs, and all described the finest shooting they’ve had in years.

The only downside? Lots of competing hunters.

Ironically, our current pandemic has led to a boom in hunting and fishing license sales. That statistic seems at odds with what should have been a poor economic outlook.

Hunting licenses, in particular the out-of-state type, aren’t cheap. Neither is the requisite gear needed to take ducks, or the cost of waterfowling guides should hunters choose that option. Apparently, Midwestern resolve and work ethic have put the virus scare on the back burner in favor of outdoor pursuits.

I have no doubt that Minnesota’s waterfowl opener, slated for Saturday, Sept. 26, will see records numbers of hunters and dogs hit area marshes. Many of these folks will be newcomers to the waterfowling game.

So, too, will their dogs.

To get started on the right webbed foot, there’s a few fundamental ideas that will make everyone’s hunts more enjoyable, especially on busy waters.

First off, don’t expect a canine companion to perform flawlessly on his first hunt. Even grizzled waterfowl dogs can make their owners cringe with embarrassment when they shrug off even simple commands. Neophyte dogs are practically guaranteed to do it.

Most mistakes are easy to prevent with a couple basic tools. Steadiness is the hallmark of a hunting dog’s training. A dog that bolts at a shot before being sent can wreck shooting accuracy and spook ducks.

Fortunately, a dog doesn’t need to be 100% steady because a hunter can ensure steadiness by simply tying the dog in a place in the boat where it can follow action. A strong rope, with sturdy clips at each end, will keep a surging dog in the boat until the handler decides it’s time for her to retrieve. This tip will keep both dog and hunter calm and maintain peace with nearby hunters who don’t relish watching free-for-all dog bursts at every shot.

The lead rope should be just the right length to hold the pup in the boat without undue slack that can promote surging. I have a professional dog training friend who didn’t hold his own dog, a hard-muscled, 90-pound lab to the same standards as his clients’ dogs. Matter of fact, he did zero steadiness work with the dog before embarking on a Missouri duck hunt.

Wisely, he tied the dog to a gunwale support before the shooting started. When the first duck dropped, the beast bolted out of the jon boat amid the sound of exploding rivets and towing the lead and a mangled piece of the aluminum spar.

Moral? Make sure the lead rope is tied to a dog-proof hunk of metal.

A few years ago when my young lab, Cash, accompanied me on his first duck hunt, I tied him in so that he could peer out of the boat blind but not get his paws past the gunwale. Despite his 100% steadiness during training drills, I knew the duck calling, volleys of opening day shotgunning and buzzing ducks would put him in high gear.

The first duck I shot didn’t make it halfway down when he pulled against the leash, straining to launch after the duck. I left him to watch the duck drift on the water and waited for more ducks to pass our set-up. Minutes later, another flock shot by, and I dropped a second duck.

Again, Cash pulled the lead tight, his golden eyes lit with excitement. It took about 20 minutes of sitting and watching the floating ducks before his gentlemanly demeanor reappeared.

Once it did, I calmly unhooked him and sent him after each duck. When another bird presented a shot, he sat stoically, waiting to be sent.

But, this retrieve wasn’t as straightforward as the previous two. That bird had fallen behind a high stand of rushes, out of Cash’s vision. From the shot and subsequent splash, he knew a bird was down.

Although, I had trained him to follow hand signals to locate unseen birds, I used a simple technique; I positioned Cash where he could see the area of the fall and threw a rock near the out of sight duck.

Upon seeing the rock’s flight and noting the splash, Cash zeroed in on the bird and soon returned with it.

To make the job easier, I tossed the rock downwind of the bird, so that Cash would scent the duck before seeing it.

Carrying a bag of throwing size river rocks will make unseen birds easy to retrieve and at the same time build confidence in a young dog.

Plus, neighboring duck hunters will appreciate the quick retrieves over protracted handling drills.

If rocks are forgotten, shotshells can be tossed in a pinch. Although, at $1 a shell, it’s best to keep rocks handy.

As strange as it may seem, stout leads and rocks can solve duck hunting tribulations, even in pandemic-stricken seasons.