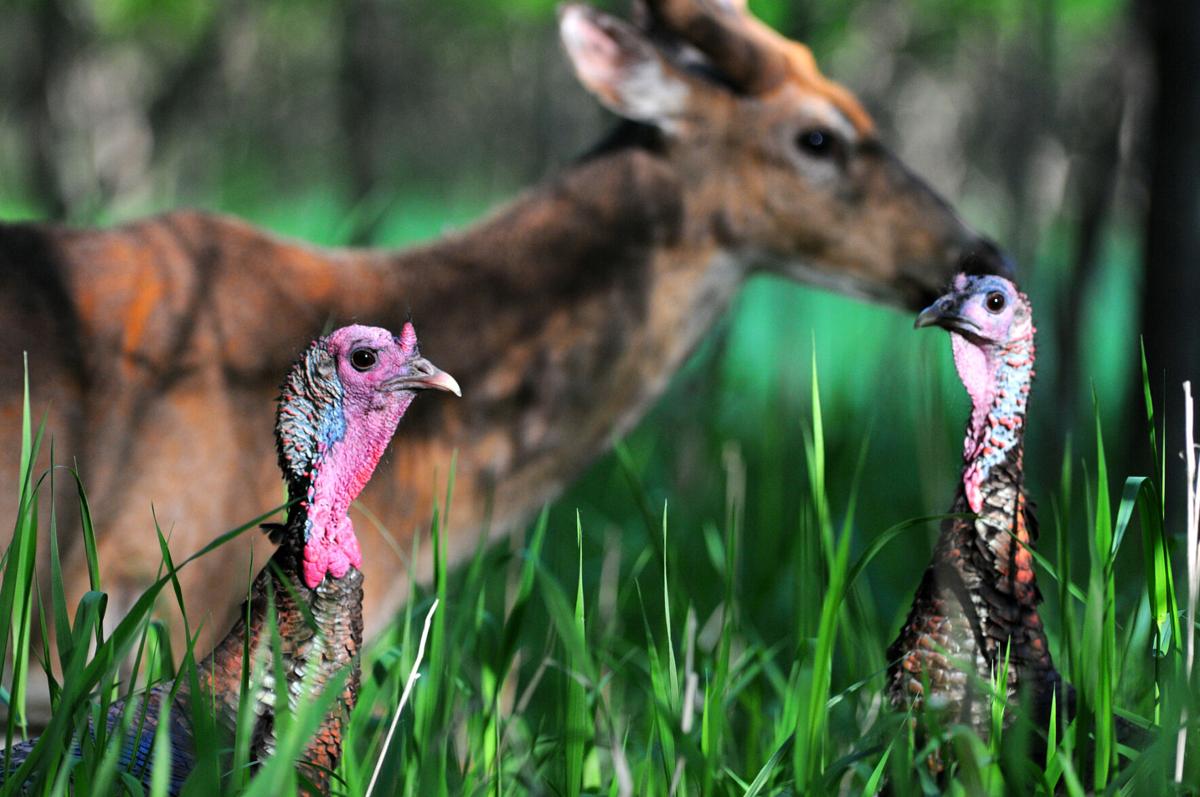 When hunting turkeys from an effectively camouflaged blind, the platform can become a wildlife viewing gem. Anything from song birds to deer may pass within feet of a blind, oblivious of your presence. 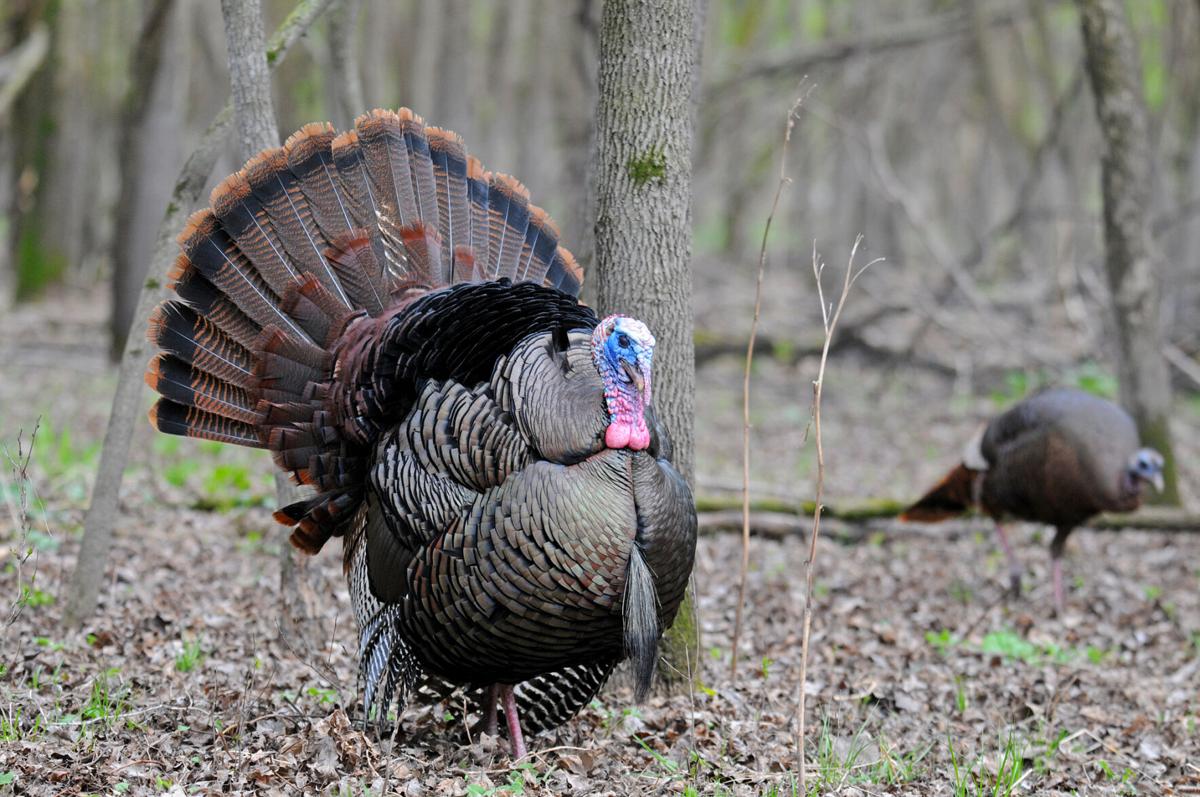 A mature eastern gobbler, or tom, struts for a hen in a Minnesota River bottom land woodlot. 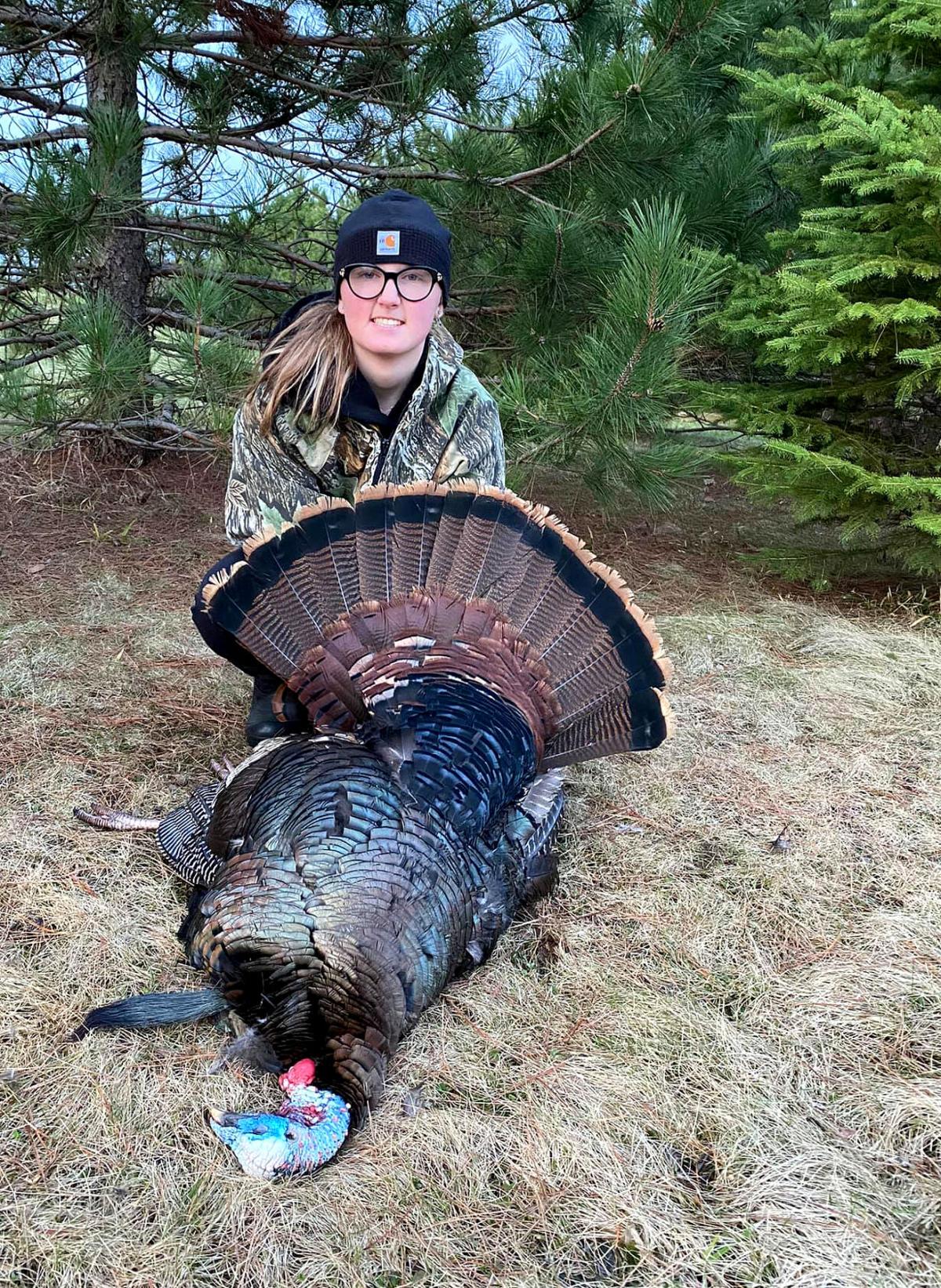 With turkey numbers burgeoning across the state, hunting opportunities are many. Chandell Warner bagged this hefty, old gobbler with her dad, Tyson, who helped as they hunted out of a pop-up blind.

When hunting turkeys from an effectively camouflaged blind, the platform can become a wildlife viewing gem. Anything from song birds to deer may pass within feet of a blind, oblivious of your presence.

A mature eastern gobbler, or tom, struts for a hen in a Minnesota River bottom land woodlot.

With turkey numbers burgeoning across the state, hunting opportunities are many. Chandell Warner bagged this hefty, old gobbler with her dad, Tyson, who helped as they hunted out of a pop-up blind.

Thirty-three years ago, the Minnesota DNR embarked on a wild turkey stocking program in our area.

To anyone who hunts or enjoys wildlife watching, the results of that action are obvious. The giant birds are now seemingly everywhere, at home in both urban and rural areas.

The birds are so numerous that in some locales turkey-car collision numbers rival those of deer. Although, significantly smaller than a deer, a 23-pound turkey perfectly mimics a hurtling bowling ball and can do severe damage to a vehicle.

Turkeys that inhabit Minnesota are of the Eastern variety, and when frequently hunted, rank near the top of the wariness scale.

There are three more commonly hunted turkey species in the U.S. To our west and south into Nebraska, Merriam’s turkeys dominate the landscape, and further south finds the Rio Grande variety, a staple for Texas hunters. Arguably the most difficult turkey to bag is the Osceola. This crafty bird makes its home in Florida, and compared to its cousins, is ultra-spooky, bolting at even slight sign of predation.

Most turkey hunters stick close to home, choosing to concentrate on local birds. In Minnesota, the season is a long one. For archers, the hunting kicked off on April 14 and continues until May 31. Firearms hunters must choose one of six weeklong time blocks to hunt the birds.

Long gone are the days of hunters having to apply for three-day hunts in their initial primary range in southeastern Minnesota.

Enclosed blinds, similar to pop-up tents, are printed in camouflaged fabric and used by nearly all turkey hunters. These blinds conceal hunter movements, a boon because turkeys have sharp vision and, unlike deer, can see in full color.

Interestingly, erecting a blind in a meadow frequented by turkeys rarely spooks the big birds. Conversely, whitetail deer will bolt from a blind not well brushed-in and set weeks before it’s used.

If a turkey blind is erected well beforehand and covered in brush, it cannot only be an effective ambush site, but an excellent wildlife viewing platform, too.

Other turkey hunting staples include calls to mimic hens and entice love-struck gobblers and realistic decoys resembling both hens and gobblers to concentrate the birds’ attention and draw them close for a shot.

Archers usually place their decoys no more than 20 yards, while shotgun-toting hunters can get away with decoys set as far as 40 yards out.

My friend, Tyson Warner and his daughter, Chandell, recently pursued a gobbler from the confines of a wisely located blind. The pair both had turkey tags and that day, Tyson was there to lure a gobbler to their decoy set, which consisted of both a hen and a young gobbler, or jake.

The idea was that a mature gobbler, upon seeing a youngster courting a female, would strut in to confront the jake. Sometimes, even the best set-ups can fail, but this time, everything worked.

A large eastern gobbler strutted into their decoys after Tyson sweet-talked it with urgent, plaintive hen calls. Once the tom was sufficiently in range, Chandell took careful aim and dropped the heavy bird, which sported a long, thick “beard.”

The pair teamed up on the bird near Cromwell, a town in northeastern Minnesota, proving that the DNR’s stocking program successfully morphed into statewide turkey proliferation.

My last turkey encounter was almost laughable by comparison. Last fall, I had a Wyoming Merriam’s turkey tag burning a hole in my pack. So after securing a nice pronghorn buck, I entered a waterhole blind in gorgeous alpine to wait out the birds.

Two hours into my vigil, a group of 20 Merriam’s milled by at only 28 yards. One of the gobblers was significantly heavier than his companions, and I set my eyes on him.

After 15 minutes, the large bird separated himself from the group, and I sent an arrow on its way. The arrow flew perfectly, pin wheeling through the clear mountain air, but missed the bird by scant inches, ending its flight in a deep chasm behind the bird.

Unlike our edgy local eastern birds, the twang of the bowstring and arrow whistling above barely ruffled their feathers. The birds actually moved closer, behind the blind where I had no window.

The flock was a mere seven yards away. I was stifling a laugh when attempting to unzip another window, but the noise echoed in the canyon and sent the birds slowly shuffling off into the pines.

On the hike out, I promised to return to the mountainside again and take advantage of the great opportunity provided by long-sighted game departments who probably didn’t envision just how popular the sport would become.