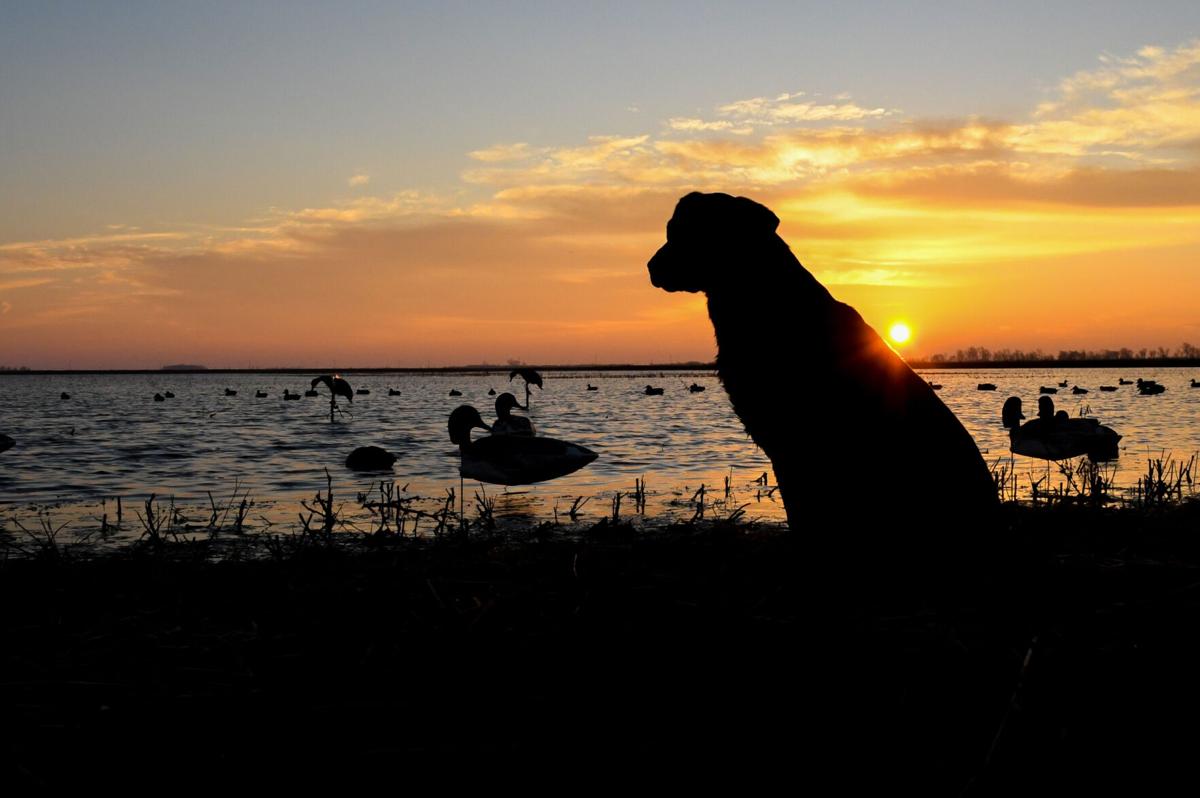 An anxious retriever looks out over a flooded bean field, scanning the Missouri bootheel horizon for flights of ducks. 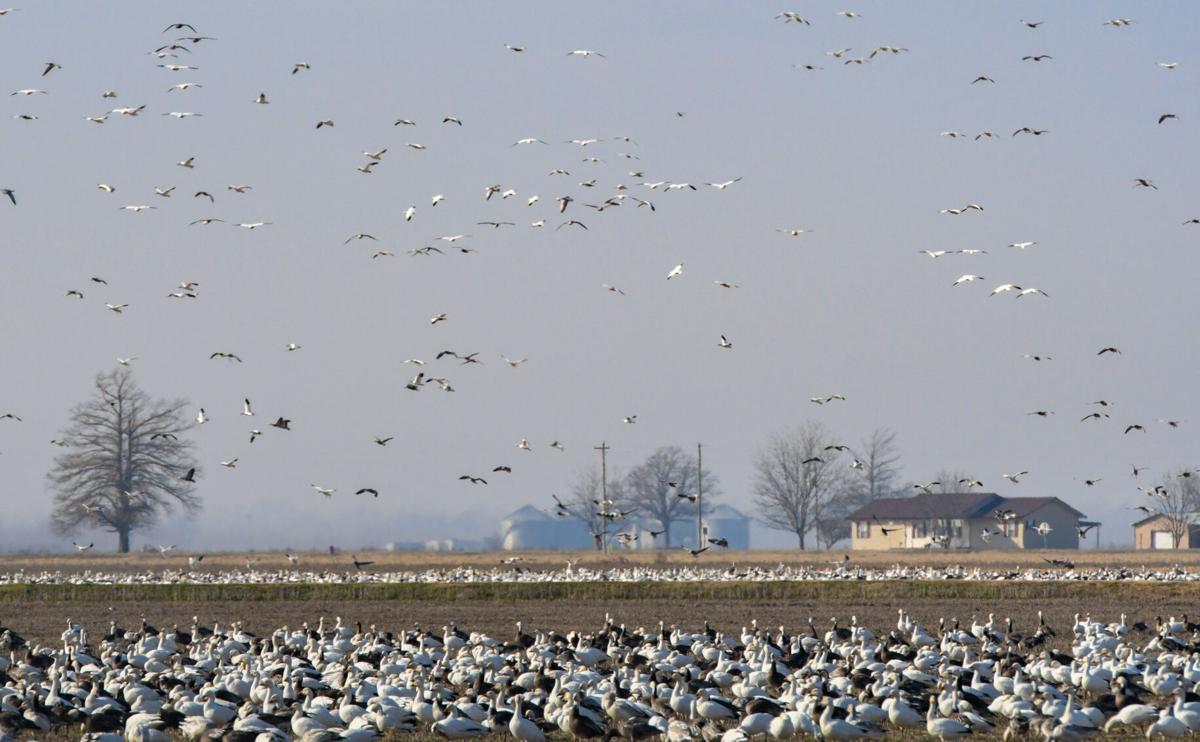 Present by the thousands, snow geese feed and descend on a sod field in Missouri. The geese are so populace that generous bag limits are allowed to keep the bird’s numbers in check. 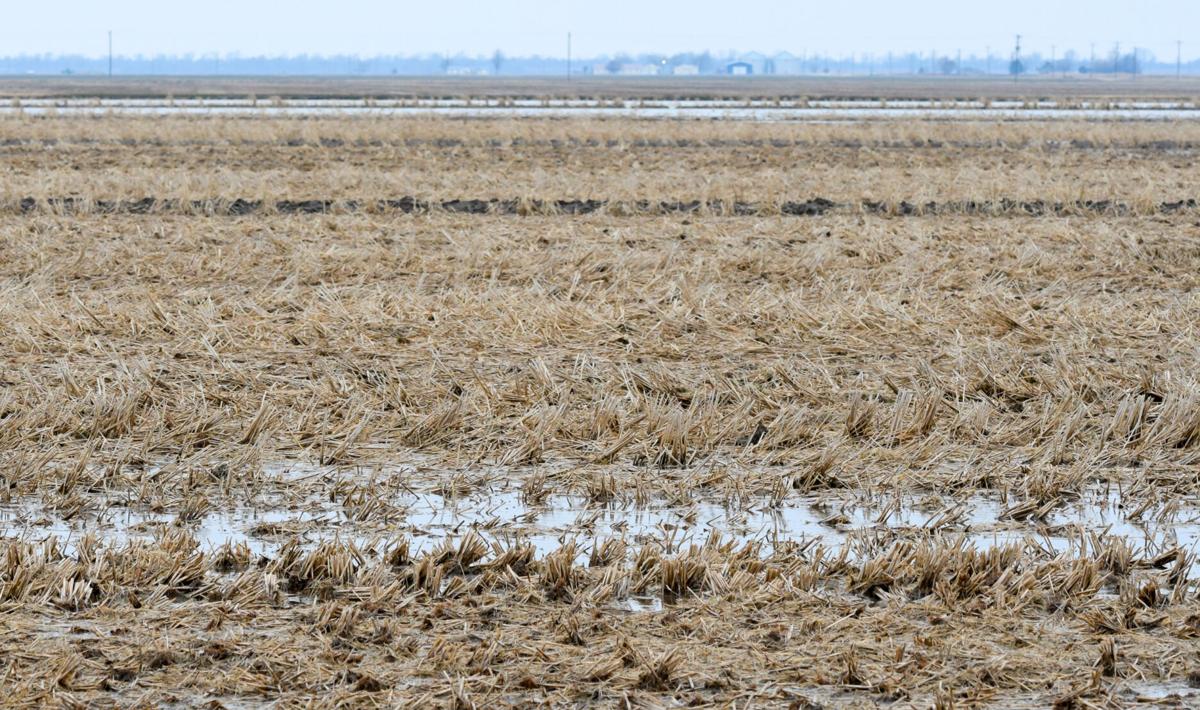 A harvested Missouri rice field can attract significant numbers of ducks and geese.

An anxious retriever looks out over a flooded bean field, scanning the Missouri bootheel horizon for flights of ducks.

Present by the thousands, snow geese feed and descend on a sod field in Missouri. The geese are so populace that generous bag limits are allowed to keep the bird’s numbers in check.

A harvested Missouri rice field can attract significant numbers of ducks and geese.

That was the one-way length of my most recent waterfowling travel.

Water dog, Cash, and I were headed to Missouri’s bootheel region, an area that juts into northeast Arkansas and is bordered on its east side by the mighty Mississippi river and Tennessee.

Waterfowling migration maps clearly show a bird bottleneck that concentrates in the bootheel and Arkansas, continuing south into Louisiana and the Gulf coast.

Drivers literally drop into the bootheel region while traversing Missouri highway 55. The area is a low, broad plain covered in agriculture fields of sod, soybeans, cotton and rice. The rice industry alone accounts for $140 million of the relatively finite areas farm economy.

Unlike the rugged Ozark mountains just to the west, the bootheel is dead flat, reminiscent of bayous much farther south.

The bootheel features uber-fertile river delta soil, making it ideal for growing nearly any crop. Furrow irrigation of rice crops and an abundance of water attracts a lot of waterfowl, and hunters.

In fall, after crops are picked, the same pumps designed to irrigate crops are used to flood grain fields to attract ducks and geese. The results have been impressive and an entire waterfowling lease and guiding economy has grown out of it.

Since the area is flat and mostly tree-less, pit blinds that put hunters on eye level with the water are used to fool sharp duck eyes. At first, it would seem easy to waylay a limit of birds from such an efficient hide. However, just like ducks everywhere else, many learn to avoid anything out of the ordinary, including pits and large decoy spreads. Especially, after dodging pit-borne hunters in other states.

The migration not only takes ducks south, it also educates them.

I secured what is known as a mid-week pit lease to hunt next to a flooded bean field. My expectations were sky-high as I entered the blind on the first day. The sun rose amid a deep blue sky accented by cloud formations lit brilliant orange and yellow.

Along with the rising sun came awakening snow geese, thousands of them seemingly in every direction lifting off roosts to wing among a deafening din to feeding fields. The sight of thousands of snow geese circling above a grain field and descending in ever shrinking arcs to land looked exactly like a living, moving tornado.

The snow geese had no designs on alighting on water, so I had no opportunities to bag any because none passed over within shotgun range. With tens of thousands of the birds aloft, that seemed like a statistical impossibility.

Unfortunately, they did land on property I couldn’t hunt, only 80 yards behind the pit blind — about 5,000 of them. It was a frustrating but awesome sight.

Snow geese have made a thunderous come back in the last 40 years. So much so that high numbers of the populace birds need to be harvested every year to keep their numbers under control.

In Missouri, fall hunts have a 20-bird limit, while spring hunts have no limits and allow hunters to employ shotguns with extended magazines to more effectively bag geese.

My consternation elevated more when no ducks visited the bean field. After three hours going duck-less, I exited the blind and photographed and recorded video of snow geese descending on and feeding in a sod field.

Shortly after, I returned to the pit and sat until sunset without firing a shot. Even a duck paradise can go cold, sometimes for days.

The following day arrived amid a driving 25 mph southeast wind and heavy, all day rain, which was flung like buckshot at Cash and I while we peered from the blind. I shot at one duck.

Paradise was eroding fast as I had only one more day to hunt.

The next morning greeted us with the same wind, but from a more promising, duck-moving northwest direction. We saw myriad ducks early, but the high-flying birds mostly ignored our calls, save for one group of mallards.

Unbelievably, the flock circled down after hearing my high ball calls above the gusty wind noise. A pair of hens, followed by six drakes, floated down.

I ignored the hens, which were in easy range, and waited for the greenheads to get into range. They didn’t make it, flaring off into the rain and clouds just as they were nearly in shooting range.

An incoming Missouri ice storm curtailed the hunting. I aimed the truck bnorth at noon, choosing ice-free roads over the duck blind.

As bad luck would have it, I had arrived in the middle of a duck doldrum. Missouri friends who hunted the bootheel those same days reported slower than normal action.

I’d wager that the ice storm ushered in flocks of naïve ducks anxious to visit flooded bootheel grain fields, transforming the area, at least temporarily, back into a waterfowling Eden.