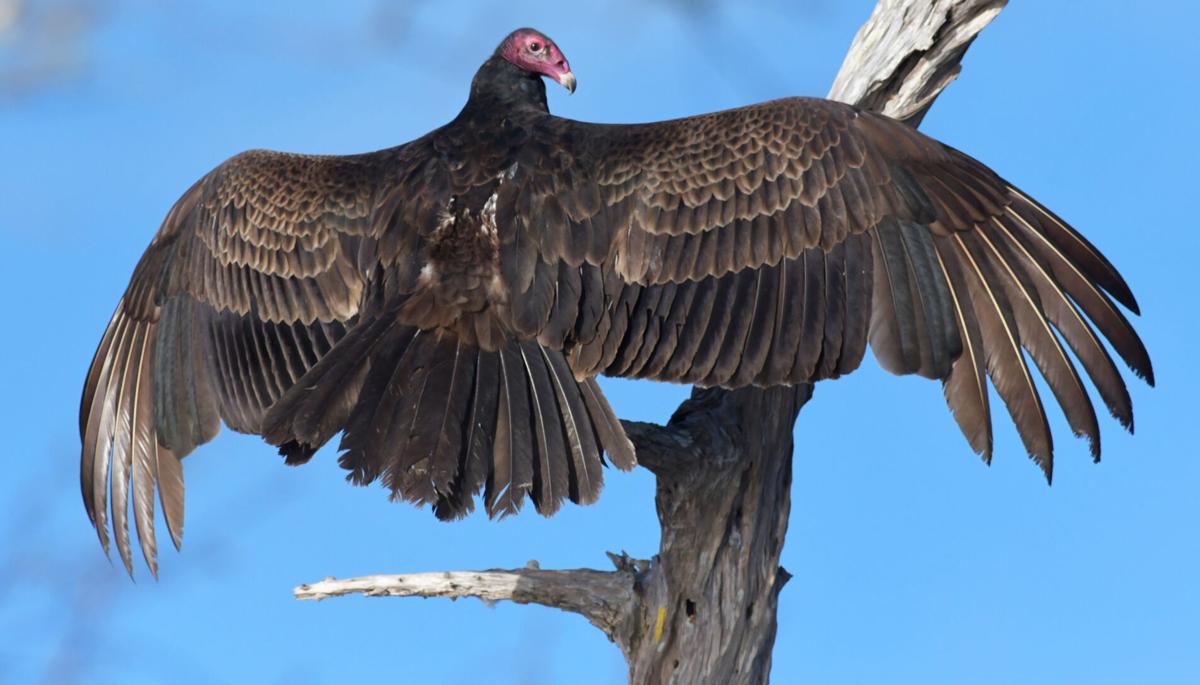 A less-than-attractive turkey vulture dries its wings in early morning before taking flight to search out a meal of carrion. 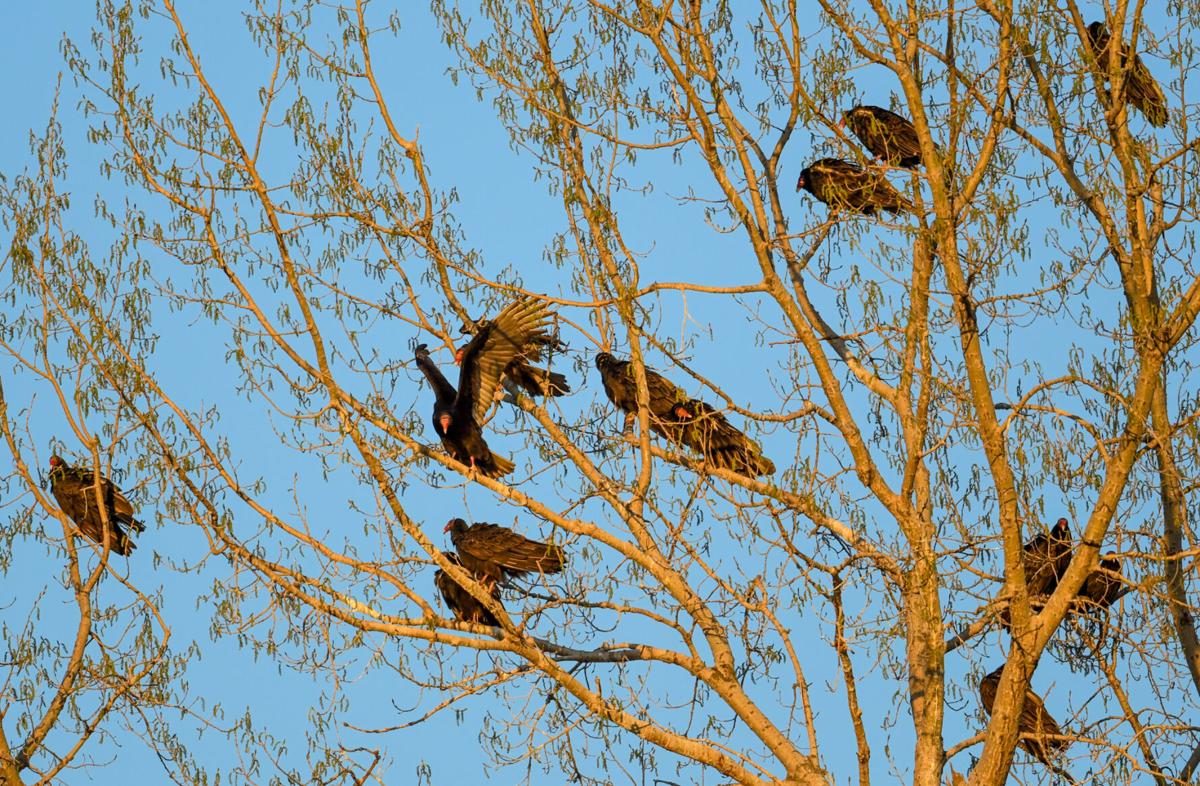 A flock of sinister appearing turkey vultures perch for the night, ominously setting up in trees above a local cemetery. 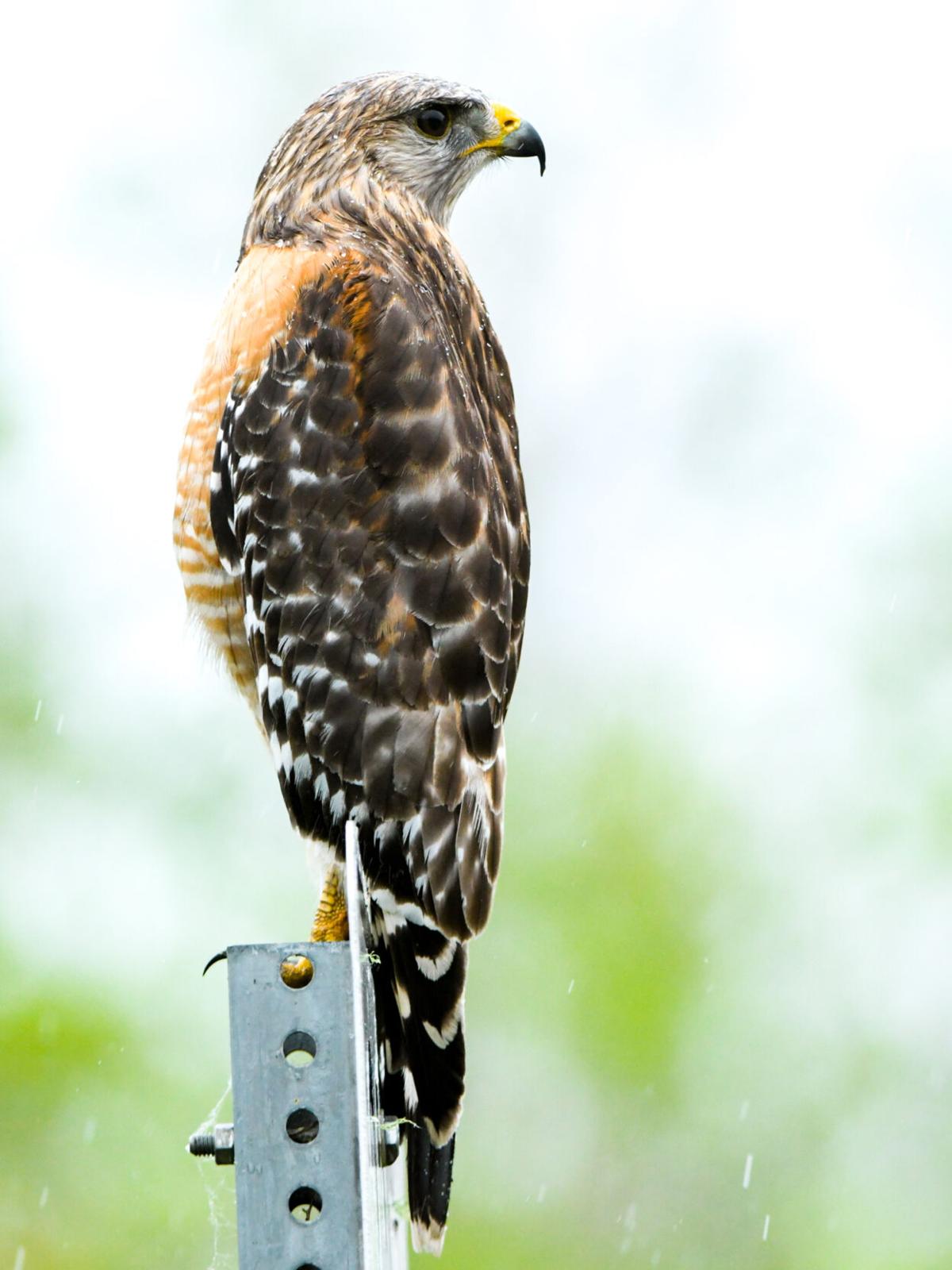 A hawk takes advantage of vultures’ brazen feeding activity at a boat access, waiting his turn to grab a morsel from a decaying carp.

A less-than-attractive turkey vulture dries its wings in early morning before taking flight to search out a meal of carrion.

A flock of sinister appearing turkey vultures perch for the night, ominously setting up in trees above a local cemetery.

A hawk takes advantage of vultures’ brazen feeding activity at a boat access, waiting his turn to grab a morsel from a decaying carp.

Sometimes, you do not have to travel far in order to witness wildlife behaviors when some critters abound just outside your front door.

From my residence in west Mankato, there is a clear view of Woodland Hills cemetery, and once spring arrives, a view of the unique birds that roost in treetops at the property’s north end.

In what can only be described as foreboding, maybe menacing considering the somber location, dozens of turkey vultures call the towering trees home every April until cold of fall drives them out on their annual migration to more temperate habitat.

It is not uncommon for the birds to take flight every mid-morning, climbing higher and higher on their massive wings atop wind thermals that shoot up from the surrounding river valley. If winds are sufficient, the dusky black birds will cruise at exceptionally low altitude, pinwheeling over neighborhoods in their non-stop quest to locate food.

Many folks spy high-flying vultures and confuse the large birds with eagles. Unlike eagles, vultures seldom flap their wings unless needing lift to ascend to glide height. The birds also soar with a signature wing-vee where their wings form a bit of a forward vee formation.

On closer inspection, vultures certainly do not share an eagles’ proud and handsome appearance. Their near black feathers and bald, red face set with opaque eyes makes them look like the Grim Reaper of the sky.

The only other American bird that can claim that title is the black vulture, a strikingly similar bird that rarely crosses the Minnesota border.

Vultures have a specific purpose — to clean up nature’s and man’s animal casualty messes. If a deer is struck and perishes in a field, it will not be long before a vulture spies it from its towering glide.

Unlike bald eagles, who will dine on carrion right at a road’s edge, vultures, unless habituated otherwise, prefer to feed far away from human interference.

Just like wise crows, vultures can be careful learners. It is not uncommon to find turkey vultures lurking near riverine boat accesses where they have learned that folks can leave behind fish carcasses, which are devoured in short time by the ravenous birds.

Interestingly, this behavior attracts seemingly more noble birds like hawks to mimic them.

I arrived at a boat landing a few years ago intent on photographing whatever birds were using the waterway, namely nesting herons. Unfortunately, I was greeted by rain and wind that gusted to 40 mph, not ideal conditions to launch a flat-bottomed craft.

Instead, I prowled the remote access’ spur road and located several vultures roosting at the road’s edge and hopping down to enjoy a snack of carp, which putrefied in the warm, precipitous weather.

To my astonishment, a red-shouldered hawk had become a quick study on easy meals, foregoing his usual hunting instincts to feast on the same fish the vultures fed on. Occasionally, the hawk would return to his sign post perch and zip down to kill a mouse side dish.

While the dark weather did not permit any sharp flight shots, the hawk, spurred by the vulture’s cavalier attitudes, sat calmly on his perch while I fired away.

It was a fortuitous capture, thanks to the unusually brazen vulture activity.

Just a few weeks ago, while looking for nesting trumpeter swans, I spotted an eagle sitting on a deer carcass 60 yards off a seldom traveled back road. Accompanying the mature, white-headed eagle was a trio of vultures.

The light was perfect, but I had to curse myself as I toted no long glass.

However, it was nearly as satisfying to observe the eagle-vulture interaction as they fed.

After the eagle had ripped a share from the deer, the vultures would stalk ominously toward it in a teetering gait, driving it to take a short flight off its dinner. Then, the vultures would put their strong, bony beaks to work removing their share of food.

When the eagle could stand no more, he marched back in, his feathered scowl pushing the vultures off. The birds continued this bizarre “sharing” behavior until I left.

Turkey vultures may not win any awards as the friendliest or best-looking birds, but their dark, supernatural aura, distinctive manners, and necessary cleaners of nature’s carrion make them interesting birds, indeed.