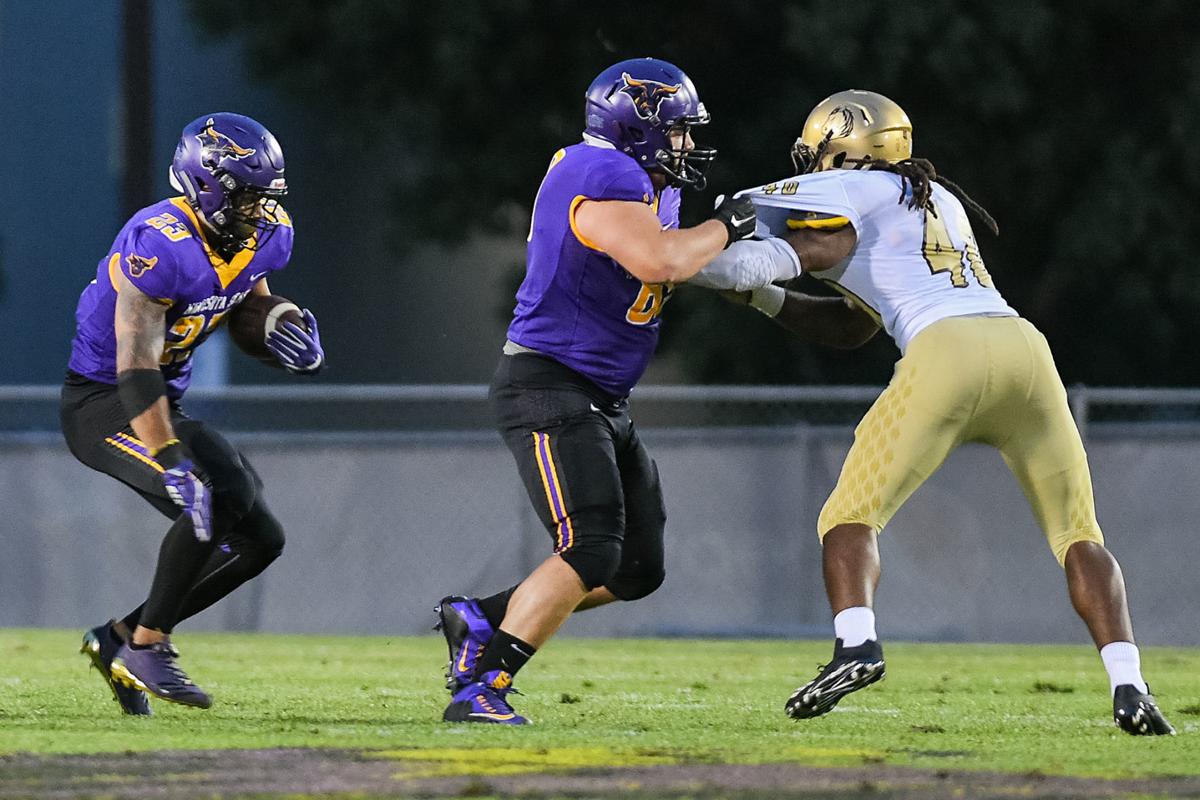 Minnesota State tackle Evan Heim (center) will probably need to learn to play center and both guard spots if he gets a chance with a professional football team. 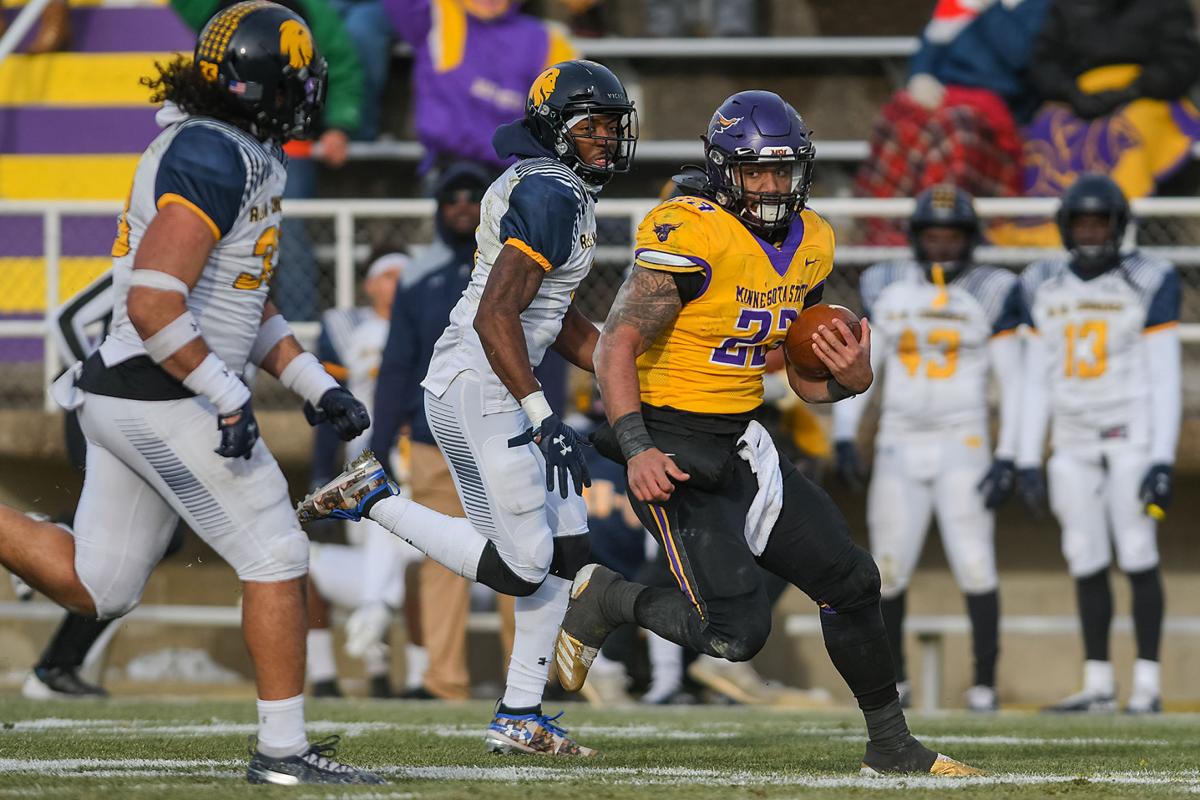 Minnesota State’s Nate Gunn has already begun a career as a medical-device salesman, but he’d still like the opportunity to play professional football.

Minnesota State’s Shane Zylstra (left) is trying to stay positive, hoping to get a workout with NFL scouts before the draft in late April. The NFL has canceled all of its college tryouts because of the coronavirus pandemic.

Minnesota State tackle Evan Heim (center) will probably need to learn to play center and both guard spots if he gets a chance with a professional football team.

Minnesota State’s Nate Gunn has already begun a career as a medical-device salesman, but he’d still like the opportunity to play professional football.

Like everyone else, Shane Zylstra is hunkered down at home, waiting for the all-clear to resume a normal life, which for him includes working out daily, hoping to get an opportunity in professional football.

The most prolific receiver in Minnesota State history, Zylstra is trying to maintain his strength, speed and agility so that when professional scouts are back on the road, conducting workouts, he’ll be ready to showcase his considerable skills.

“I’m trying to stay calm, but (the societal restrictions caused by the coronavirus outbreak) certainly adds to the mystery of this,” Zylstra said. “This is uncharted territory, but everybody is going through the same thing.”

Zylstra and former teammates Evan Heim and Nate Gunn are working out, hoping to some day be given the opportunity to play professional football. The three were scheduled to be included at a pro-day workout at the University of Minnesota on Wednesday, but it has been canceled as NFL teams have restricted employees from conducting such gatherings.

“I think this really hurts the small-school guys,” Zylstra said. “Teams will be less likely to take a chance on us, but I’m going to stay prepared and be ready if I can get into a camp.”

Zylstra finished his college career with the most receptions (227), receiving yards (4,297) and touchdown catches (54) than any receiver in Minnesota State history. As a senior, he set single-season team records with 81 receptions for 1,676 yards and 18 touchdowns, helping the Mavericks reach the national-championship game.

Since the season ended, he’s stayed in Mankato, where his wife works, and commuted to Eagan to train with his older brother Brandon, who has played with the Minnesota Vikings and has one year remaining on a contract with the Carolina Panthers.

But their gym has closed, so he’s planning to work out in a private gym in New London, where he went to high school.

At 6-foot-5 and 215 pounds, he has the size to play in the NFL, but scouts will want to see speed, quickness and agility. Zylstra said that his agent talked with some teams at the NFL Combine at Indianapolis last month, and there is some interest from several teams.

Each day, he works on route-running, with different patterns than college, and learning the jargon. He also catches a lot of passes, focusing on fundamentals and trying to stay sharp in case the NFL hastily conducts some tryout camps before the draft on April 23-25.

“There are a lot of players in my position, and no one knows what will happen,” he said. “Hopefully, this will all blow over, and I’ll be able to test out and show off my athleticism.”

Former Minnesota State tackle Evan Heim videotaped a “mock combine workout” last week with all of the combine drills, just in case he doesn’t get the chance to work out in front of scouts. He ran the 40-yard dash in 5.0 seconds, completed the agility drill in 4.45 seconds and three-cone drill in 7.6 seconds, and he went 9-feet-0 in the broad jump and 29-5 in the vertical jump. He also did 24 reps with 225 pounds in the bench press.

He said all those numbers are the the range of players who attended the NFL’s combine.

“If I don’t get a chance to work out, at least I’ll have this video (to show scouts),” he said.

But he will have to shift from tackle to an interior position on the line, likely needing to learn both guard spots and center and be efficient and consistent at each spot.

He still weighs around 307 pounds but has lowered his body fat to around 19%. He’s been living with his parents in DePere, Wisconsin, working out at a buddy’s home gym.

“I try not to worry about things I can’t control,” Heim said. “I’m going to continue to work on my conditioning and nutrition. It sucks that we put in all the work to get ready for the Pro Day, and it was canceled, but you have to be creative.”

Running back Nate Gunn said he was so despondent after the national championship game, taking much of the blame for the loss, he was ready to give up football.

“But after a week or so, I woke up one day and decided I wasn’t ready to give it up,” Gunn said. “My love for the game wouldn’t allow me to walk away.”

Gunn was named the Bobby Bell College Impact Player of the Year, presented annually to the top Division II player in Minnesota, after rushing for 1,667 yards and a team-record 31 touchdowns last season. He was also named the Northern Sun Intercollegiate Conference offensive player of the year and received several All-American honors.

Since graduation, he’s taken a job as a medical-device salesman, working out in the Twin Cities when he can. He’s been working on his 40-yard dash time, which he said is around 4.6, which isn’t bad for a 220-pounder, but he’d like to take that down farther. For now, he has a workout scheduled with the Chicago Bears in late April so they can time him, as well as watch how he performs in running-back drills.

“They all want to see you in person,” he said. “When you’re a D2 guy, there’s going to be a lot of ups and downs. Hopefully, I can show them my best.”

In his job as a medical-device salesman, still living in Mankato and working throughout southern Minnesota, he’s had a close look at the current health crisis. He enjoys what he’s doing, and he’d like to get a chance at professional football, too.

“I really love football, but when you see that this virus is killing people, I understand (the NFL’s decision),” he said. “This is more serious than football. I have a Plan A and a Plan B, which are equally strong. If (football) doesn’t work out, I know I have something else that I love.”