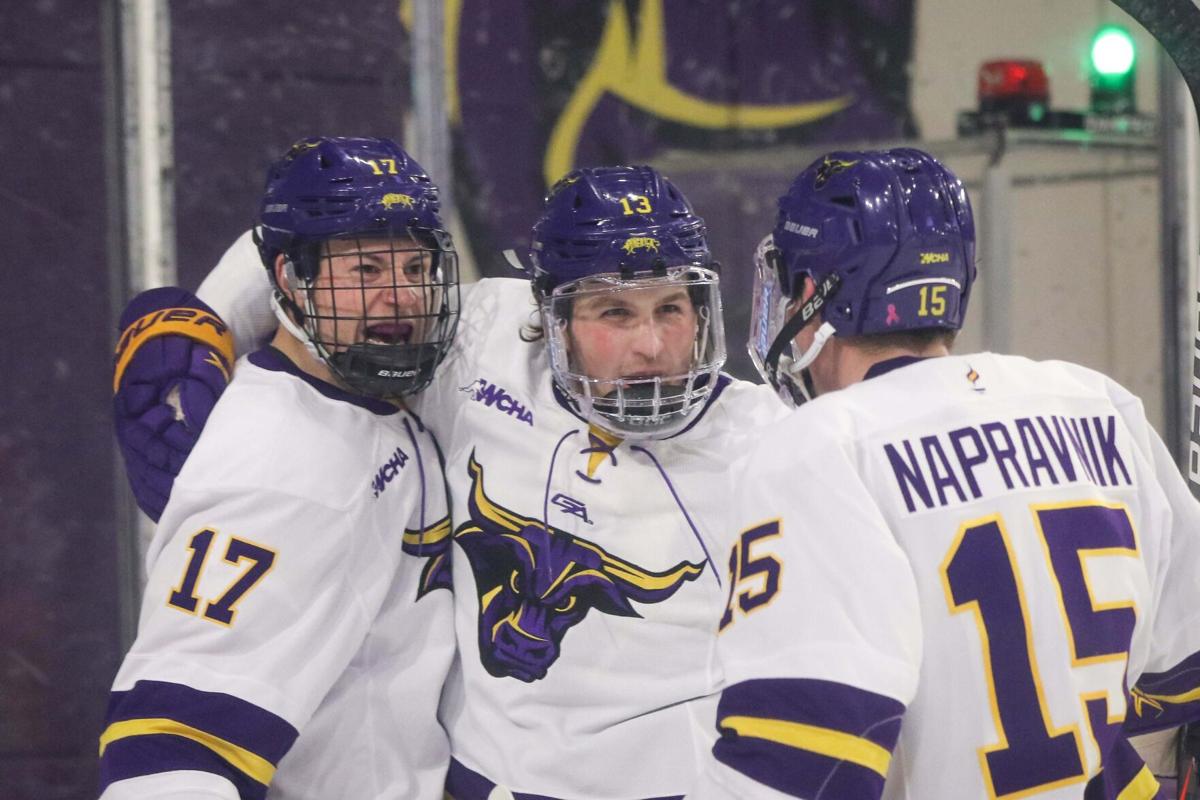 Minnesota State’s Walker Duehr (17), Brendan Furry (13) and Julian Napravnik (15) each had a goal and an assist in Sunday’s 4-1 win over Ferris State. 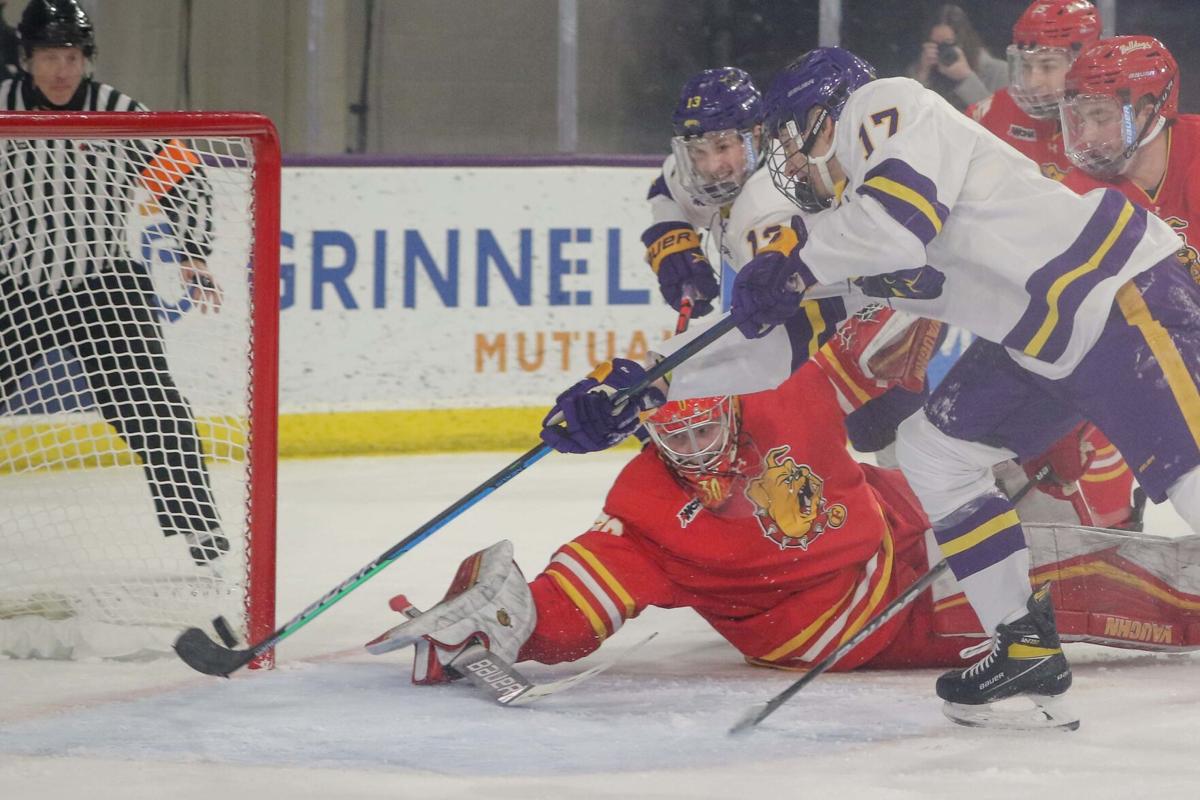 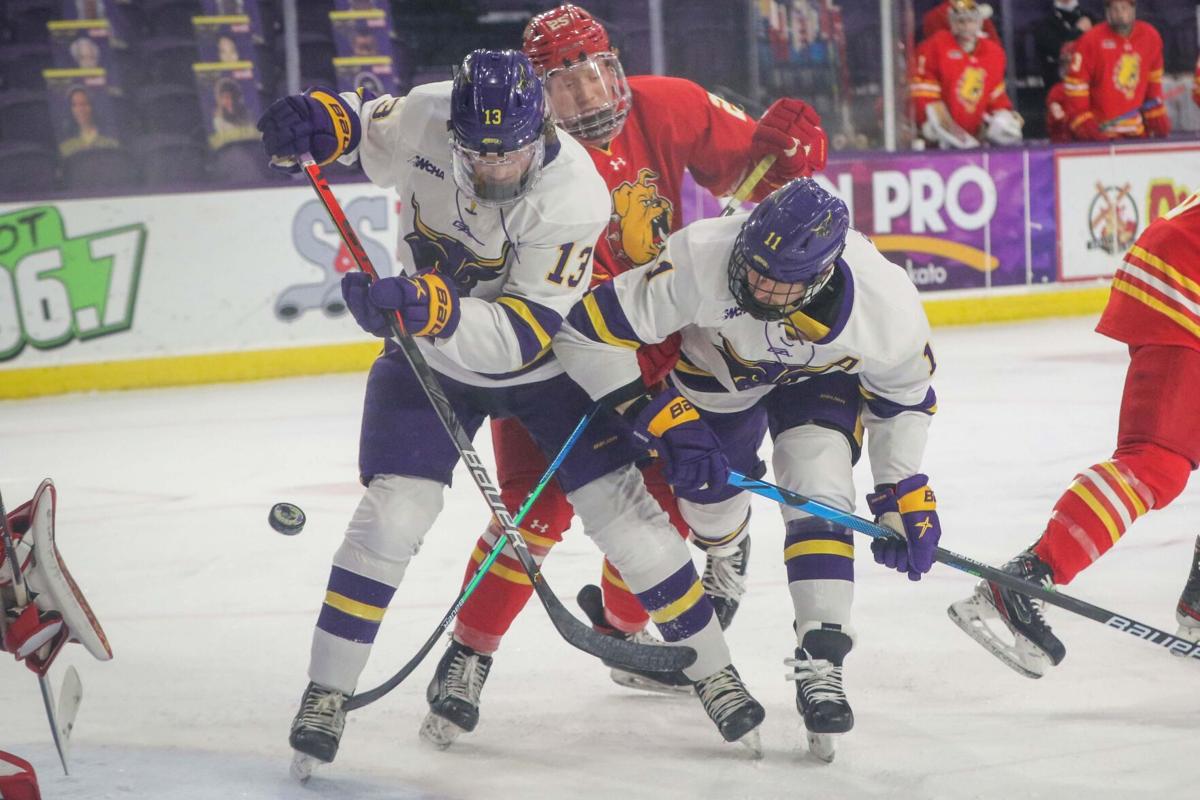 MSU’s Brendan Furry (13) and Jared Spooner (11) attempt to control the puck next to the goal crease in the first period during Sunday’s 4-1 over Ferris State.

Minnesota State’s Walker Duehr (17), Brendan Furry (13) and Julian Napravnik (15) each had a goal and an assist in Sunday’s 4-1 win over Ferris State.

MSU’s Brendan Furry (13) and Jared Spooner (11) attempt to control the puck next to the goal crease in the first period during Sunday’s 4-1 over Ferris State.

In recent years, the Minnesota State men’s hockey team’s power play has been great, with percentages over 27% in two of the last three years.

So far this season, it’s been downright special.

The No. 2 Mavericks scored a pair of surgical goals with the man-advantage Sunday en route to a 4-1 WCHA victory over Ferris State at the Mayo Clinic Health System Event Center.

“We have two groups that are firing on all cylinders ... whenever they go out there, they give us a really good chance to be able to put one in the net,” MSU forward Walker Duehr said.

For the second straight night, the Bulldogs got the better of things early, as they hit the crossbar twice in the game’s first five minutes.

However, MSU was able to get back on track with the help of the fourth line — Jared Spooner-Brendan Furry-Duehr. At 5:43, Wyatt Aamodt fired a shot from the point that Furry was able to tip past Bulldogs’ goalie Roni Salmenkangas. After a lengthy review for goaltender interference, the goal stood. Duehr also assisted on the play.

In the game, Duehr and Furry each finished with a goal and an assist. The goal was Furry’s first in an MSU sweater.

“His offensive game is really starting to come,” Hastings said. “He’s a big kid that can play at a pace, he thinks it well.”

About five minutes later at 11:01, the MSU power play got its first of the night when Julian Napravnik ripped home a snap shot after a nice feed from Cade Borchardt. Nathan Smith got an assist on the goal.

The Mavericks’ power play returned to the ice early in the second, and quickly scored again when Borchardt tipped Smith’s snap shot. Sam Morton also got an assist.

Duehr banged home his own rebound for his second goal in as many nights at 17:09, with assists going to Furry and Napravnik. Napravnik finished with a goal and an assist.

The two goals were Duehr’s first of the season.

“Really happy for Walker, because if there’s been a guy that’s been wearing some stress here over the past few weeks, it’s been him,” Hastings said. “He’s been playing well, but wasn’t getting rewarded.”

Added Duehr: “It’s always nice to get the first one out of the way. It feels great to score and to contribute any way to help the team win.”

The MSU power play got another chance in the third, this time a five-minute major, but wasn’t able to convert. The Bulldogs’ Jake Transit received a game misconduct for head contact on a play that sent MSU’s Todd Burgess hard into the boards. After being helped off the ice, Burgess went straight to the locker room and didn’t return.

Hastings said Burgess has not yet been diagnosed with a concussion, but that he will go through concussion protocols given the nature of the hit.

Shots on goal favored the Mavericks 36-15. Dryden McKay made 14 saves.

The Mavericks (9-1-1, 6-0) are scheduled to host Alabama Huntsville in a nonconference series Thursday and Friday. Huntsville didn’t play this weekend due to positive COVID-19 results within its team personnel.