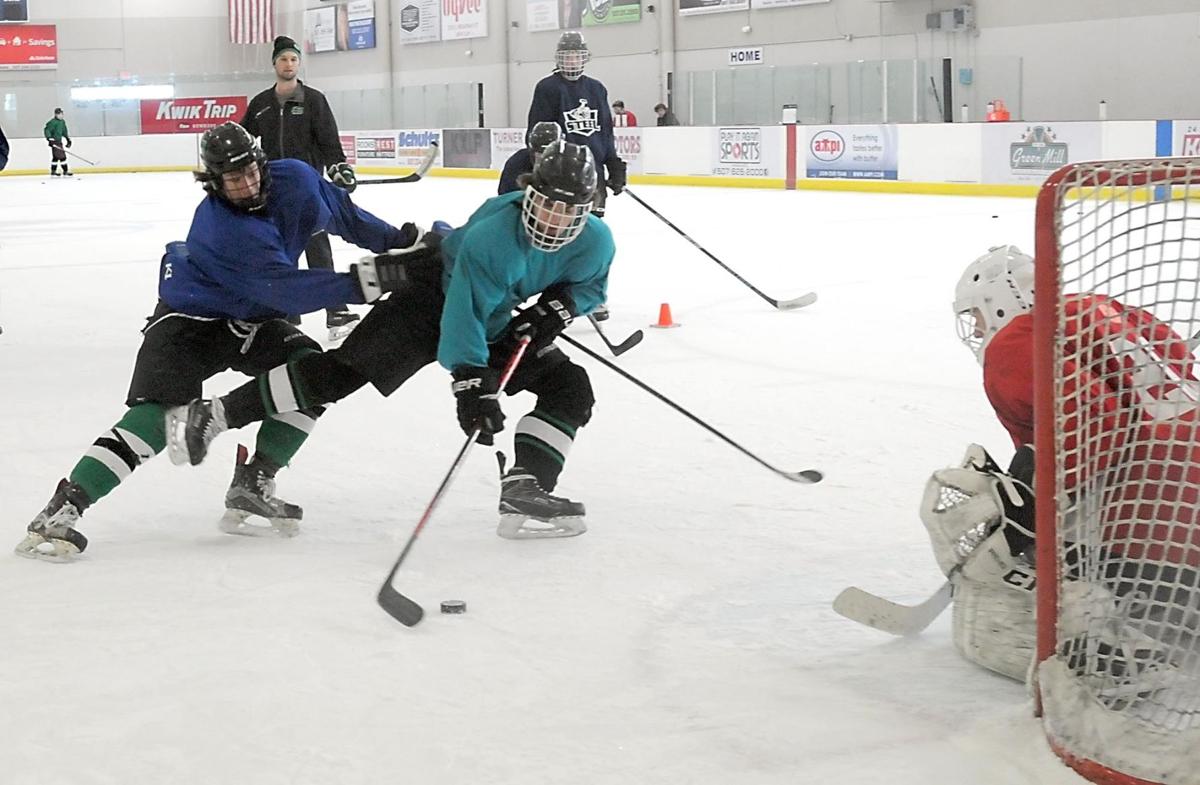 New Ulm Steel players battle during a drill as coach Zach Stepan looks on during. The Steel will play a game at Mankato’s All Seasons Arena on Friday night. 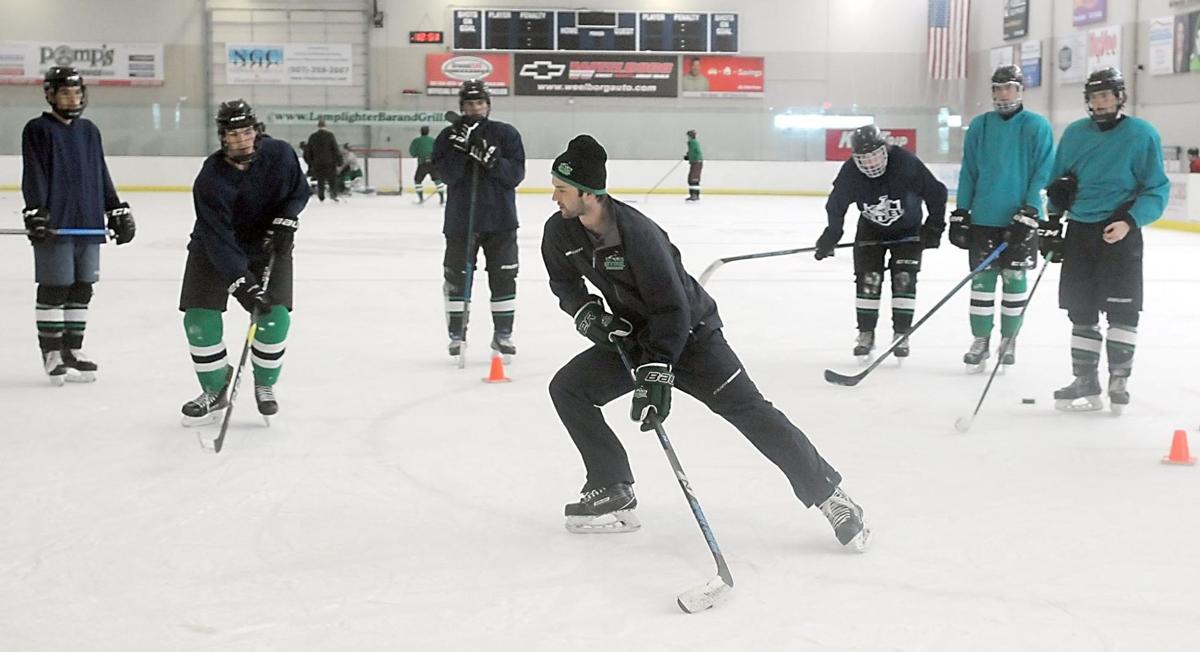 Zach Stepan instructs New Ulm Steel players during a practice Tuesday at the New Ulm Civic Center. Stepan, a former Minnesota State player, is in his first season as the Steel’s head coach.

New Ulm Steel players battle during a drill as coach Zach Stepan looks on during. The Steel will play a game at Mankato’s All Seasons Arena on Friday night.

Zach Stepan was hoping to have a long playing career in hockey after graduating from Minnesota State in 2017.

A fourth-round draft pick of the NHL’s Nashville Predators in 2012, Stepan played 36 games over four seasons for the Mavericks before turning pro.

After eight minor-league games with the ECHL’s Orlando Solar Bears — with whom he assisted on five goals — Stepan took an elbow to the head and ended up with vision problems, as well as other complications from a serious concussion.

“It was my sixth concussion,” Stepan said. “Three knocked me out cold. The headaches were so bad. I never wanted to go through that again.”

Stepan didn’t want to completely abandon the sport he loves, though, and hoped to one day break into coaching.

That opportunity came sooner than expected.

Stepan is the head coach of the New Ulm Steel, a junior team in the North American Tier 3 Hockey League, known as the NA3HL. The team, which is in its fourth season in New Ulm, will play a home game at 7:10 p.m. Friday night at Mankato’s All Seasons Arena against the Breezy Point North Stars.

In Stepan’s first season as coach, the Steel is 10-7-2-1 and tied for third place in the NA3’s West Division.

“It’s worked out really well,” Steel general manager Bryant Black said. “Step’s a really hard worker. It can be tough when you have a young coach, but he has a bright future.”

When he was going through vision and concussion therapy in the months after his final hockey game, Stepan didn’t know what he’d be doing next.

There was a short stint in real estate and another teaching physics and chemistry in Byron.

In November of 2018, the Chippewa Steel, a team in the Tier II North American Hockey League based in Chippewa Falls, Wisconsin, fired its coach, Al Rooney, and promoted first-year assistant coach Carter Foguth to interim head coach. Foguth, a three-year captain for Minnesota State who joined and graduated from the Mavericks with Stepan, called his teammate and friend and said he had a spot on the bench for him.

“Fogie called me and said, ‘I’m the head coach in Chippewa Falls now. I need your help,’” Stepan said. “The next weekend the games were in Austin and I’m living in Rochester, so I drove down to be the assistant that weekend while we were figuring it out.”

After that, Stepan met with Black and Black’s father, Steve, the owner and president of both Steel teams, and was officially hired as Foguth’s assistant.

It was an adventure, though, as Foguth and Stepan were both learning on the fly.

“Me and Fogie, both being new, we were thrown in the fire,” Stepan said. “It helped that both of us were going through it. We had to learn quick, but we couldn’t ask for a better situation.

“We jelled really well because Fogie was a defensive defenseman and penalty-kill specialist, and I was more of an offensive guy (24 goals, 59 points at MSU), so with both of us being new ... we split up those duties, and it helped both of us get used to running a team.”

Foguth had the interim tag removed after the season ended, and the plan was for Stepan to return to Chippewa Falls as his assistant. But when New Ulm Steel coach Andrew Kolb stepped down last spring, Black offered the position to Stepan.

Stepan’s assistant coach is Nick Campbell, who is in his third season on the Steel staff. Prior to coaching, the Mankato West High School alum played three years for the Steel — two when the team was based in White Bear Lake and one in New Ulm.

“It’s been a very easy transition from last year,” Campbell said. “(Stepan’s) knowledge of the game, he brings a different element through his experience. I’d say he’s players coach. He’s been there. He’s played junior hockey. He’s been at the highest level (of college hockey).”

The NA3HL has 34 teams divided into six divisions around the country. New Ulm and Breezy Point are in a division with North Iowa (Mason City), Granite City (St. Cloud), Alexandria and Willmar.

Another of Stepan’s and Foguth’s Minnesota State teammates, 2014 graduate Johnny McInnis, is coaching the NA3’s New England Knights. Corey Leiverman, the Mankato West grad who played for MSU and Gustavus Adolphus until 2014, started coaching in the NA3 for the Jersey Shore Wildcats and is now in his second season with the NAHL’s Janesville Jets.

The top players from the NA3 usually go on to play Division III hockey or, perhaps, to a higher level of junior hockey such as the NAHL or Tier I United States Hockey League.

Eleven players on the current Gustavus Adolphus roster came directly from the NA3, including Nicollet native Hunter Johnson, who played for New Ulm after playing high school for Mankato East/Loyola.

Just as his players have their sights set on college hockey and beyond, Stepan is hoping his experience leads to a long coaching career.

“Start at the bottom and work my way to the top,” he said, “just like when I started playing hockey when I was 4. It gives me something to work for.”