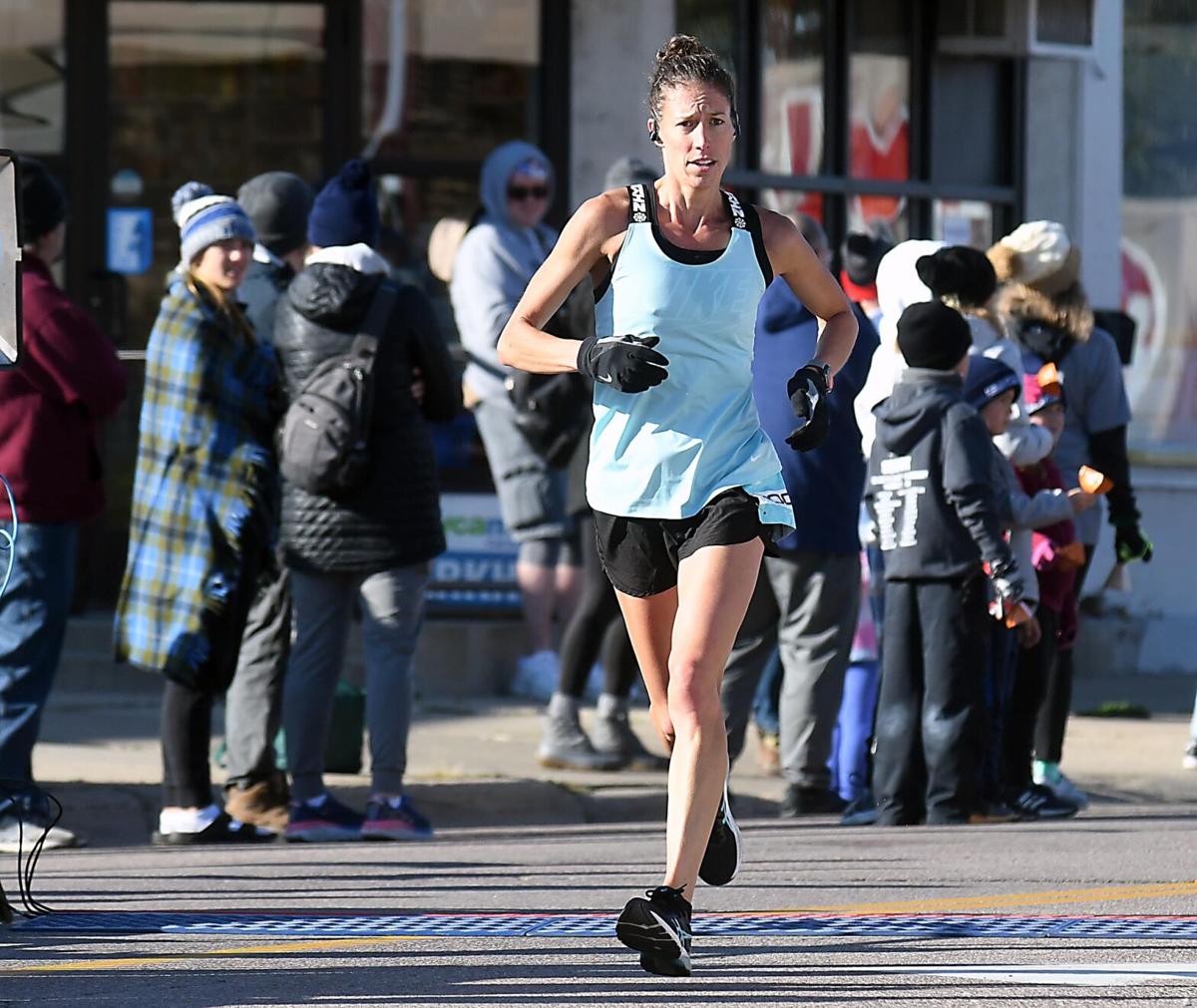 Jill Nolta of Mankato heads toward the finish line of the half-marathon Saturday. Nolta was also the top female finisher in the 5k on Friday and the 10k earlier Saturday. 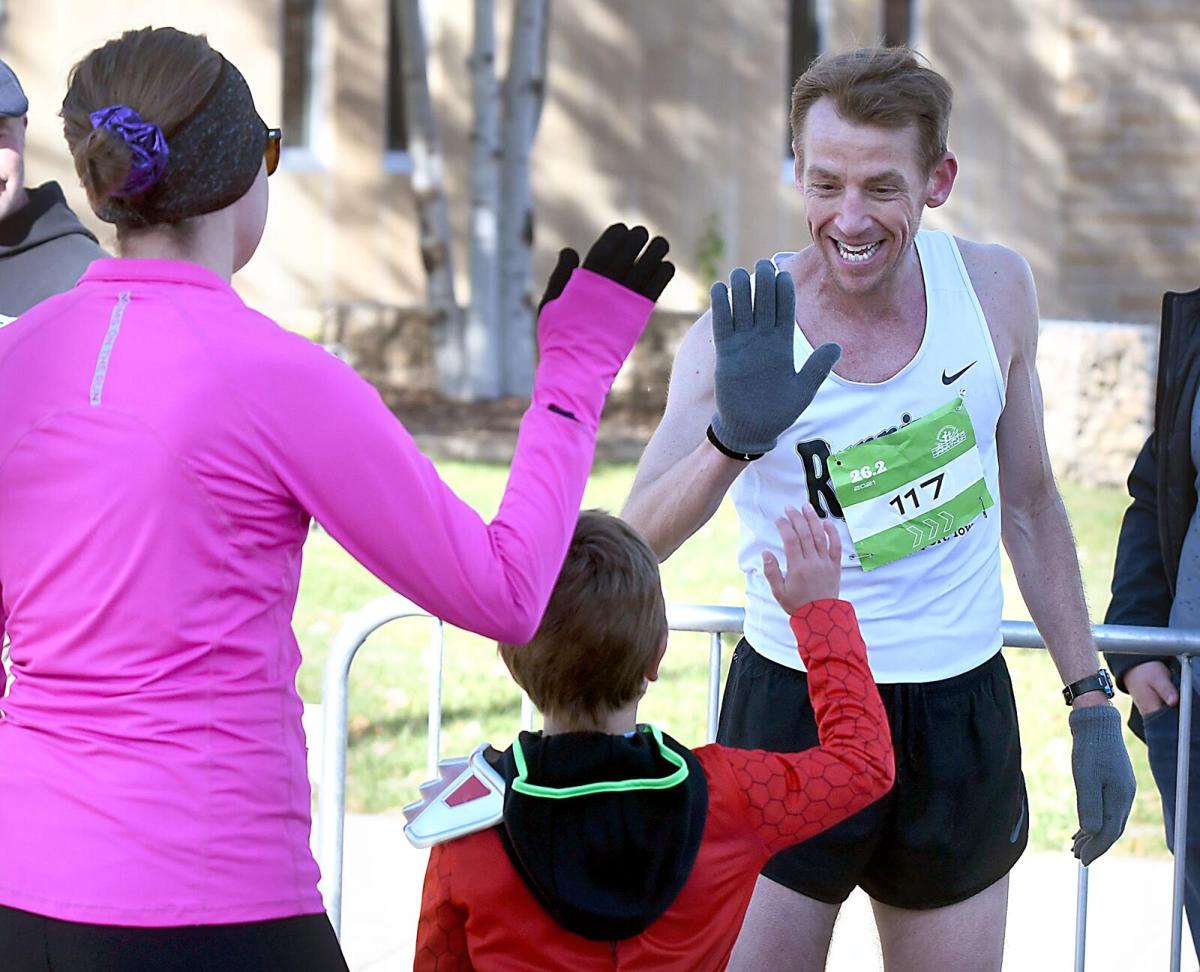 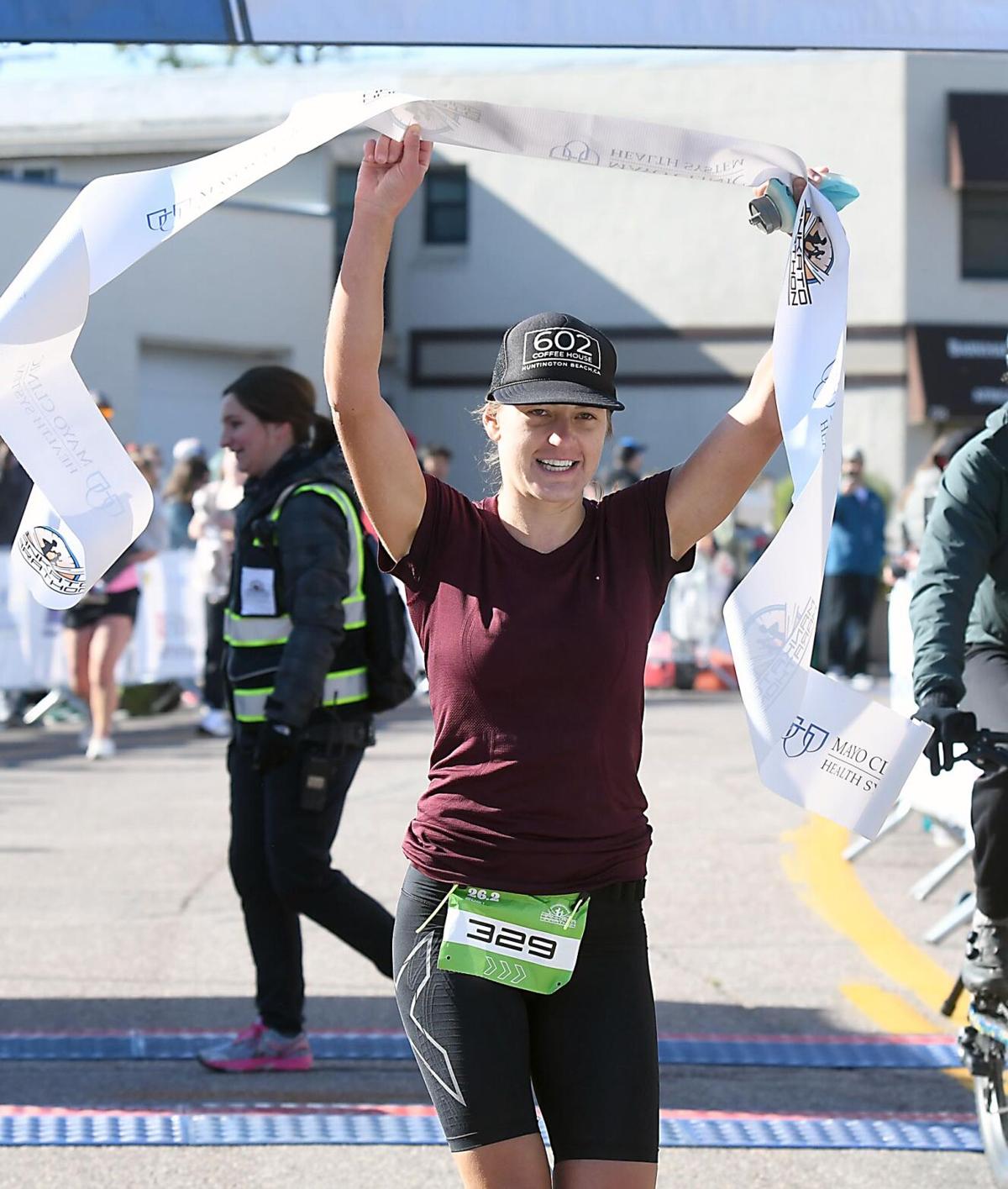 Breana Siljander crosses the finish line as the top women’s finisher of the Mankato Marathon on Saturday.

Tristan Coughlin crosses the finish line to win the Mankato Marathon on Saturday.

MANKATO — Shortly after crossing the finish line for Saturday’s half-marathon, Mankato’s Jill Nolta was asked if she might be insane.

“Probably a little bit,” was her reply.

It’s a good finish but, on it’s own, not a particularly newsworthy event. What made it special was the fact that she ran and won the Mankato 5k (19:37) on Friday and the Mankato 10k (40:07) on Saturday just minutes before starting the half-marathon.

“I’m not sure why I ran all three races,” she said. “I had never done it before so I thought I’d give it a try.”

Nolta almost didn’t make it to the half-marathon. She finished the 10k and immediately went to the restroom.

“I was in the bathroom when the gun went off,” she said. “I had to hustle to get to the starting line and keep going.”

Because the race was limiting participation this year, she signed up early for the half-marathon. As she typically does, she also planned to run the 5K on Friday as a warm-up.

Then, at the last minute, she decided to throw in the 10k, as well.

Her husband tried to talk out of it, but Nolta, who barely slept all night, would have none of it.

“He kept asking me ‘are you sure?, are you sure?’ but I felt pretty good the whole way. My quads are sore right now but that’s about it.”

Although Nolta was done and off the course by 11 a.m., she said there would be no naps.

A while after Nolta’s finish, Tristan Coughlin of St. Paul crossed the finish line as the overall winner of the full marathon. He posted a time of 2:37:34 which was faster than he had hoped.

“I was shooting for 2:38 so I’m happy,” said the 38-year-old economics professor at Gustavus Adolphus. “The course was beautiful. Whenever I got bored I just lifted my head up and looked around, the scenery was nice.”

“The crowd was great today. There were times when I’d hear the cheering, and I felt like I was in the Olympics or something.”

At the 3:19:36 mark, Breana Siljander of Minneapolis, crossed the line to win the women’s portion of the full marathon. Two weeks ago, she ran a personal-best time of 3:17 at the Twin Cities Marathon. Her goal Saturday was to get under 3:30.

Some might say running two marathons so close together is ill-advised, but the veteran of 20 marathons knows her own body and what well-trained runners are capable of.

“I’m an orthopedic surgery resident at the University of Minnesota. I like to run to calm myself down and stay focused.”

Corbin Lehn of North Mankato was the top local finisher in the full marathon at 2:46:07. He finished fourth overall.

Waseca’s Briee Mercier was the first area finisher among women with a time of 3:31:58. The 29-year-old placed fifth among women.

Mohammed Bati of St. Paul was the winner of the half-marathon, finishing in 1:09.32.

The top women’s runner was Caryn Herrick of St. Louis Park, who finished in 1:27:59.

Sam Hodgson of Mankato won the championship of the 10K on Saturday, finishing in 32:06.

Martin Husen of Rochester ran 33:21 to place second, just ahead of Soren Dybing of Duluth in 33:53.

Following Nolta, the next fastest women’s runner was Krista Walker of Mankato in 42:43. Tasheena Cooke of Owatonna was third in 43:39.