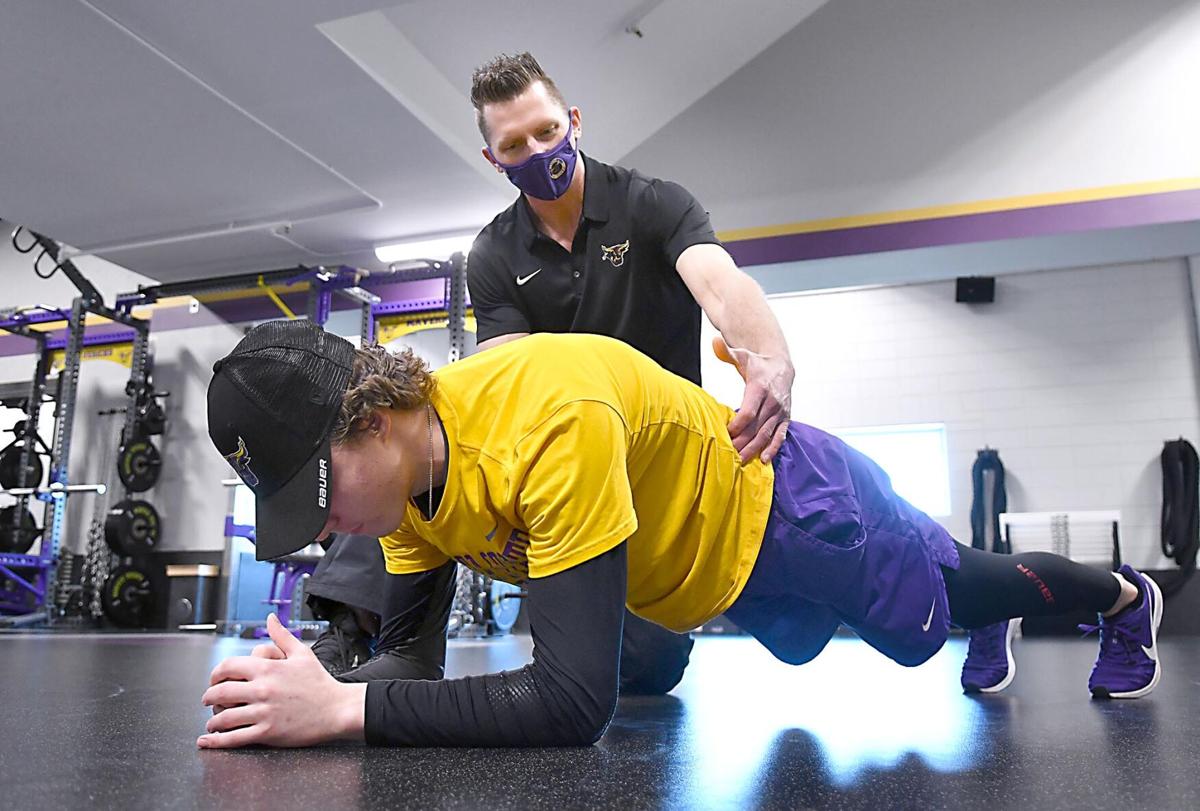 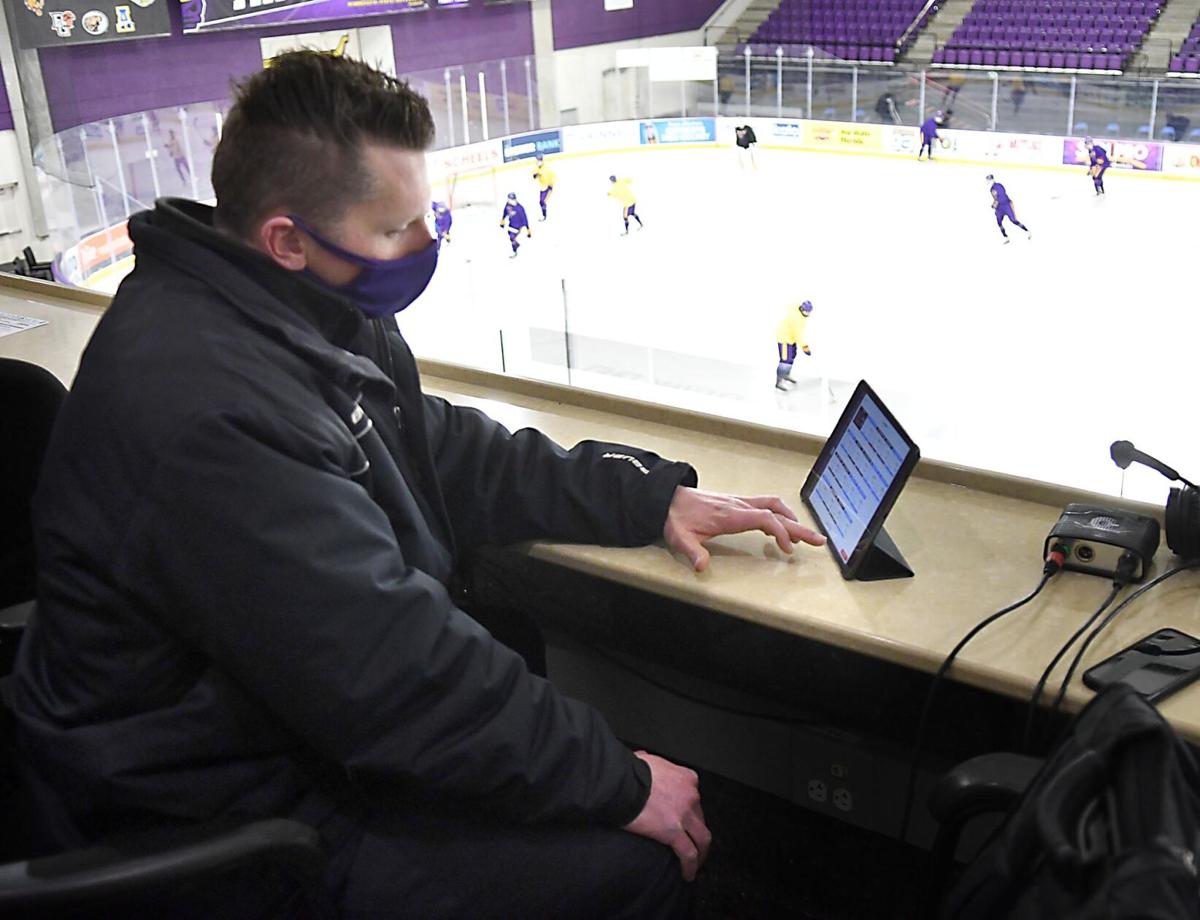 He doesn’t do press conferences, he’s not on the bench for games, and you won’t find his name listed with the coaching staff on the team’s website.

However, in a year when the routines that athletes thrive upon have been totally dismantled, Inkrott has played a crucial role in getting MSU on track, on and off the ice.

“The way that we can compete for three periods every night, I think, is one of our biggest strengths,” MSU defenseman Andy Carroll said. “As the game goes on, oftentimes we get better as a hockey team ... I think Tom is a huge part of that.”

After last season ended early due to the pandemic, Inkrott knew the challenges ahead of him and the team would be daunting.

As social distancing became the new normal and gyms closed, Inkrott realized he had to come up with ways to keep the players engaged, even if they didn’t have much equipment available.

While the players took two weeks off after that disappointing finish, Inkrott spent his days developing a questionnaire that was sent out to each player regarding what kind of equipment they would have available, as many of the players spent the summer at home rather than in Mankato.

Once he got those back, he created individual workout plans based on what they had available. Players then spent the summer emailing videos of workouts, and Inkrott would critique them.

For Carroll, it was easy, as he had access to equipment. However, Ondrej Pavel was forced to use driftwood and rocks for weights, something Inkrott had to account for in his plan.

Between the in-season starts and stops and developing workouts based around rocks, it’s safe to say it’s been a year unlike any other for Inkrott.

While strength training is, and always will be, a key to success, Inkrott has helped bring some less traditional methods to the program.

During games, practices and workouts, all MSU players wear heart-rate monitors around their chests, something the team has been doing for four years. During practices and games, Inkrott is monitoring the readings in real time on an iPad.

This information generally isn’t used in real time, but it gives Inkrott, as well as the coaching staff, a great barometer when it comes to how hard the players can be pushed.

“If we do too much, it’s going to affect performance. If we don’t do enough, that will affect performance,” Inkrott said. “What the heart rate does is it helps us ensure that we are providing enough work or stimulus to perform our best on the weekend.”

When the 5-foot-10 Carroll arrived at MSU in 2018, he weighed 171 pounds. That was a start, but to get his game to the next level, Carroll needed to put on weight — good weight.

For Carroll, the weight room was the easy part. He loves lifting and weight training and was a sponge to all of Inkrott’s advice. The hard part was the time away from the rink and weight room.

Could someone Carroll's size put on significant weight the right way?

Today, Carroll weighs 188 pounds, and his body fat has only increased about 1% in the process.

“I’m not exactly sure what the exact caloric intake is on that one, but I know it’s a lot,” Carroll said with a laugh. “Tommy’s encouraged me to get on those, and I’ve seen really good results because of it.”

Here are five things to know about the matchup.

1. Special seniors: MSU is honoring its senior class this weekend, and there isn’t much the group hasn’t done. The Mavericks have seven seniors who have been with the program for the last four years, and the team has a record of 108-26-6 during that time. The group also now has a record four MacNaughton Cups and still has big goals.

“That group has allowed our program to grow and brought it to new heights, and I know they’re not satisfied with that,” Hastings said. “They’re looking forward to the next step.”

2. Home cooking: Due to bad scheduling luck, the Mavericks have played 13 road games and only seven home games this season. With a home series this weekend, and home-ice already clinched throughout the WCHA playoffs, the Mavericks could spend the next three weekends playing at home.

3. Finding a rhythm: The Mavericks weren’t able to play back-to-backs on consecutive weekends until mid-January, which was a huge roadblock for conditioning. Over the last four weeks, the COVID-luck has been better, allowing MSU to play twice each week.

“I would say we’re in mid-season form for being in shape and stamina-wise,” MSU forward Walker Duehr said. “It just seems to be easier to stay in that game flow when you have back-to-back games.”

4. The state of MSU: The Mavericks are coming off a split with Bemidji State, which included their first WCHA loss of the season. With the league title and top seed in the playoffs clinched, MSU is playing for NCAA Tournament seeding this weekend.

5. Scouting the Huskies: The Huskies beat the Mavericks on Dec. 6 in a nonconference game at Houghton, Michigan. Tech is the only team to beat MSU this season other than the Beavers. The Huskies are led by goaltender Blake Pietila, who has a .939 save percentage and 1.65 goals-against average, both of which rank top five in the nation.