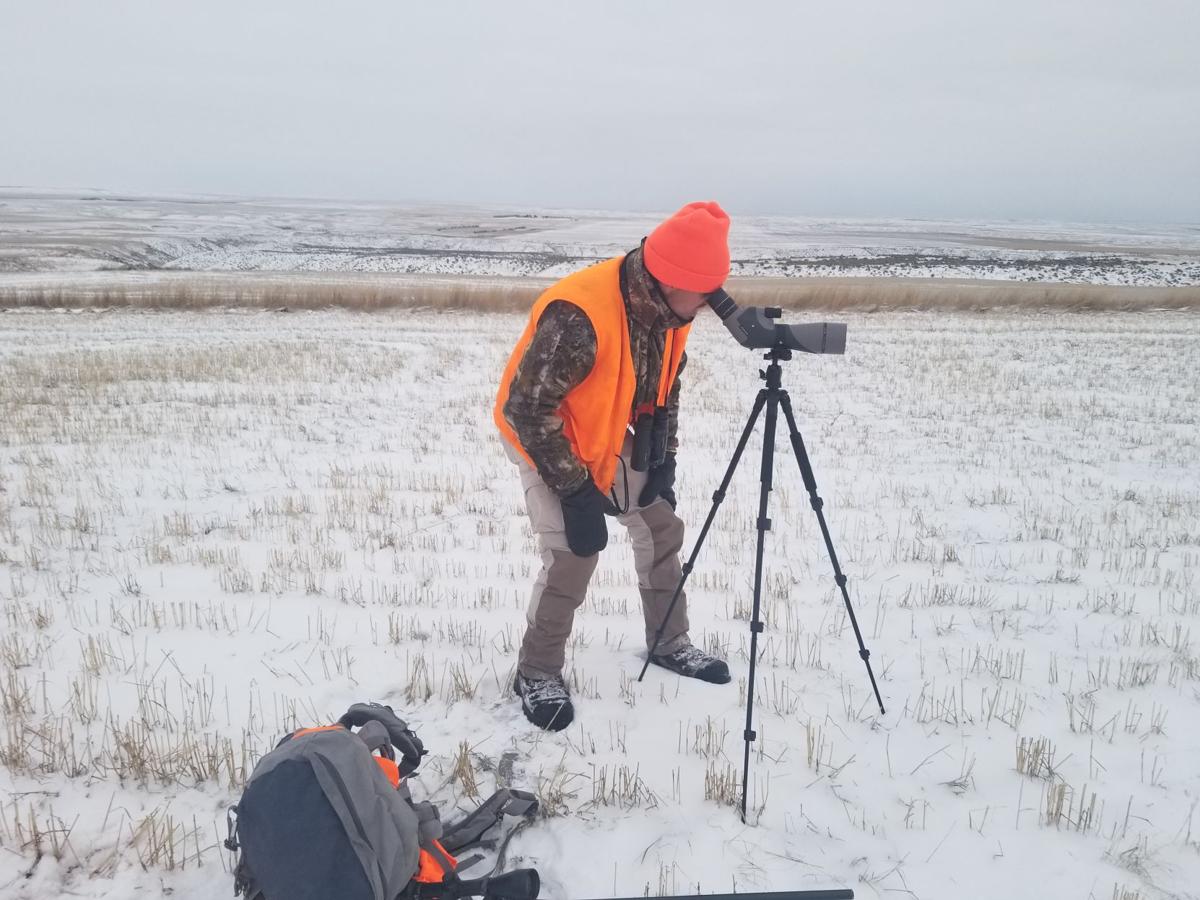 Jason Rhoten views a distant rise in search of big game to stalk. The early start to winter in Montana has changed where big game and the hunters that chase them can be found. 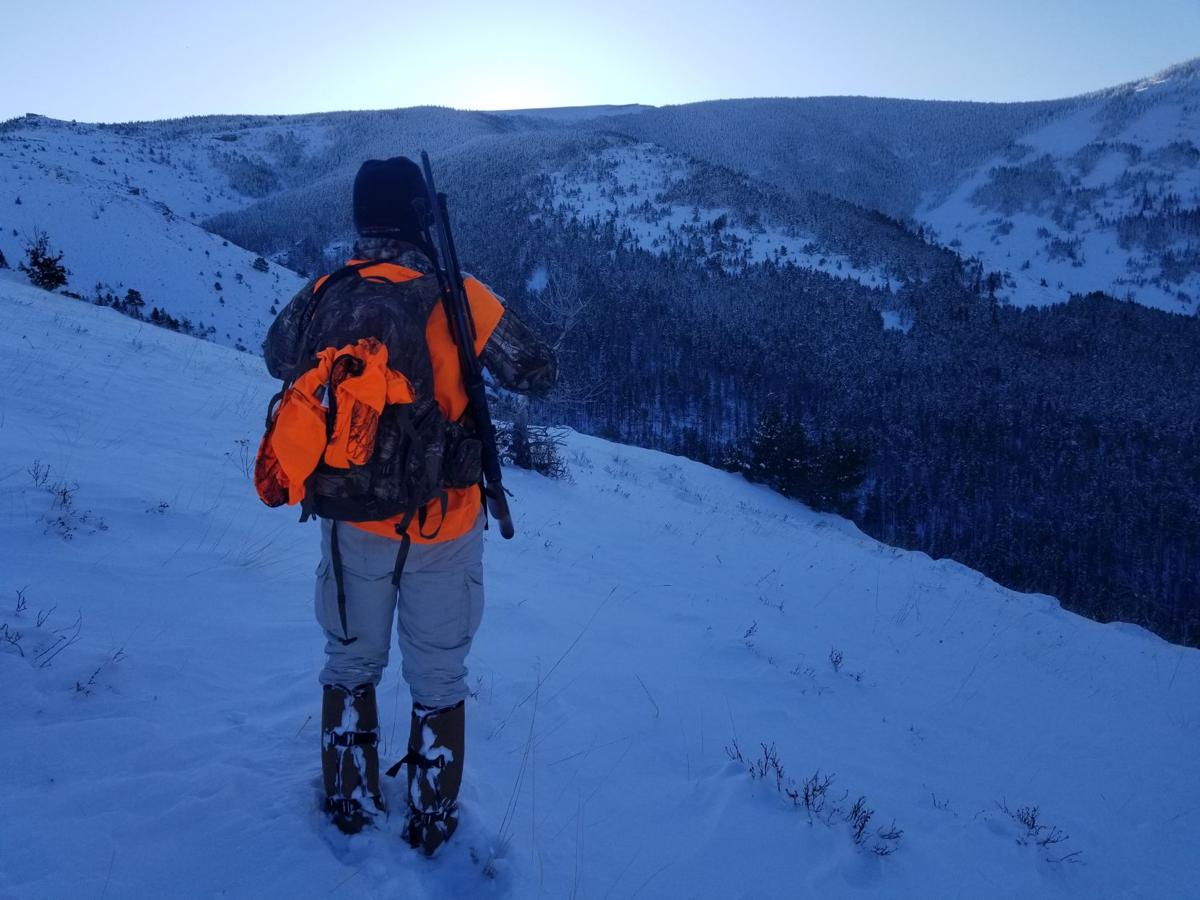 Jason Rhoten looks over a pair of valleys nestled in the Little Belt Mountains in central Montana.

Snow hangs heavy on pine trees and keeps falling as Jason Rhoten looks over a creek bottom. By late October, snowfall totals for Great Falls, Montana, reached levels typically not observed until the middle of February.

Photos by Scott Mackenthun
1 of 2

Jason Rhoten views a distant rise in search of big game to stalk. The early start to winter in Montana has changed where big game and the hunters that chase them can be found.

Jason Rhoten looks over a pair of valleys nestled in the Little Belt Mountains in central Montana.

It’s all I can do to put one foot in front of the other and continue, with an occasional step sliding out beneath me on a Ponderosa pine needle lined mountainside.

The footing is uncertain and unknown; each step is obscured beneath several inches of powdery white snow that mutes the crisp edges of boulders, fallen trees and earthen depressions. The result is some guesswork and a few missteps and slides.

Slipping and falling is the outcome on occasion; my frustration mounting each time I tumble.

Ahead of me 20 yards breaking trail and never slipping is my friend and decade-long Montana resident, Jason Rhoten. Having shed tenderfoot and flatlander status, Rhoten has taken to the Big Sky way of life.

Originally from Mantorville, Rhoten attended Minnesota State earning a bachelor’s and master’s degrees in biology. Rhoten wrestled for the Mavericks and finished highly decorated. He was a four year letterwinner and a four-time All-American. He finished his career ranked second all-time in career wins at MSU, and was the Division II national champion at 157 pounds as a senior. In 2018, Rhoten was inducted into the NCAA Division II Wrestling Coaches Association Hall of Fame. Earlier this year, Rhoten was inducted into the Minnesota State Hall of Fame.

Following in his track up the side of the mountain, I can’t help but think he could still stroll out on the mat and put anyone on their back.

If you didn’t know of Rhoten’s past, you’d never know of any of these accolades, since he isn’t one to bring them up.

Ten years have gone by quickly for Jason in his time in Montana. He began as a warm-water fish biologist in Glendive, working on a number of fishery resources for Montana Fish, Wildlife and Parks, most notably Montana’s efforts to protect and restore the endangered pallid sturgeon.

Eventually he made his way to Columbus, where he worked on a number of warm-water and cold-water resources. Earlier in 2019, he promoted to the fisheries manager position in Great Falls. Moving from Columbus to Great Falls meant moving on from a gorgeous home he built over the Yellowstone River and away from a community into which he’d grown.

The hardest part, Rhoten explained on an early summer night, was telling the Columbus–Absarokee-Park City high school wrestling team that he would be leaving, just one season after beginning as their head coach and leading the 19-year-old program to its first divisional wrestling title.

Back on the mountainside, I’m trying to keep the faith while walking in Rhoten’s footsteps. An early start to winter has Jason and I looking for public land elk, and with general tags open to taking either sex, we are just hoping to find a cow or bull. Odds are already looking longer than usual given the deep snow, lack of footprints, and a herd of cows visible on the lowlands below the mountains on private ranch property.

“We talked about being prepared for anything from warm and 60 to cold and trudging in snow,” he told me in the truck on the drive out later that day, “but I didn’t really expect to see this much snow and cold.”

The conditions make hunting a struggle. It takes longer to drive to spots on iffy forest service roads and slick highways, and the hike in goes at a snail’s pace, trudging through snow and around snow-covered objects. The hunt plan called for camping in the mountains, but the serious cold threatens to freeze water essential for drinking and cooking. The substitute plan is daily driving. We enjoy warm beds and showers and the touch of home life.

Still, it’s not the hunt we envisioned many months earlier.

“Elk hunting is all about deciding when to be aggressive and when to be careful and deliberate,” he tells me ahead of our trip. “I find that it’s better to be overly aggressive than to wait.”

The aggressive hunt we wished for has been cooled by the realities of weather and conditions.

Two months into the move to Great Falls and the Rhotens are settling into their new home. Jason and wife, Brianna, are raising sons Wil, 9, and Drew, 4, and daughters Jovie, 5, and Sylvie, 1. They’ve also raised litters of Vizslas and trained a few puppies of their own, taking advantage of the bountiful public land and diverse upland bird hunting opportunities in eastern Montana.

Hunting is a necessity in the Rhoten household; the whole family participates in most trips with mom and dad.

The unseasonably cold weather, the early snowstorms and early-onset winter will not deter Rhoten and family. He’s a veteran hunter by now and knows when to pick his battles.

He will hang back, try and fill a pronghorn tag with a child or two of his in tow and stretch out his elk tag through the end of November and possibly later, into the shoulder seasons where Montana extends hunts to help implement elk herd control.

Rhoten and I reach an exposed parkland opening adjacent two ridges on the mountain. A couple of tracks criss-cross the meadow.

“We should have been here yesterday,” Rhoten tells me with a sly smile.

We stop and glass the hillside. Before packing up and moving on, Jason finds one track originator.

“Look up at the avalanche channel and to the right, at the ‘smiley face.’ See the dark object? It’s a bedded cow moose.”

I scan the side of the mountain and after a few minutes find it. She stands out as a dark to light contrast, even in the shadow cast over the mountain in the early morning.

We’ll keep looking, hoping to stumble across a single animal or a herd, a chance to feed our spirits and our families for another year.

For me, the elk hunt will run out of time. For Rhoten, the hunt will continue. Just like his wrestling days, Rhoten will wait for his opportunity to attack and won’t stop until his time is over.