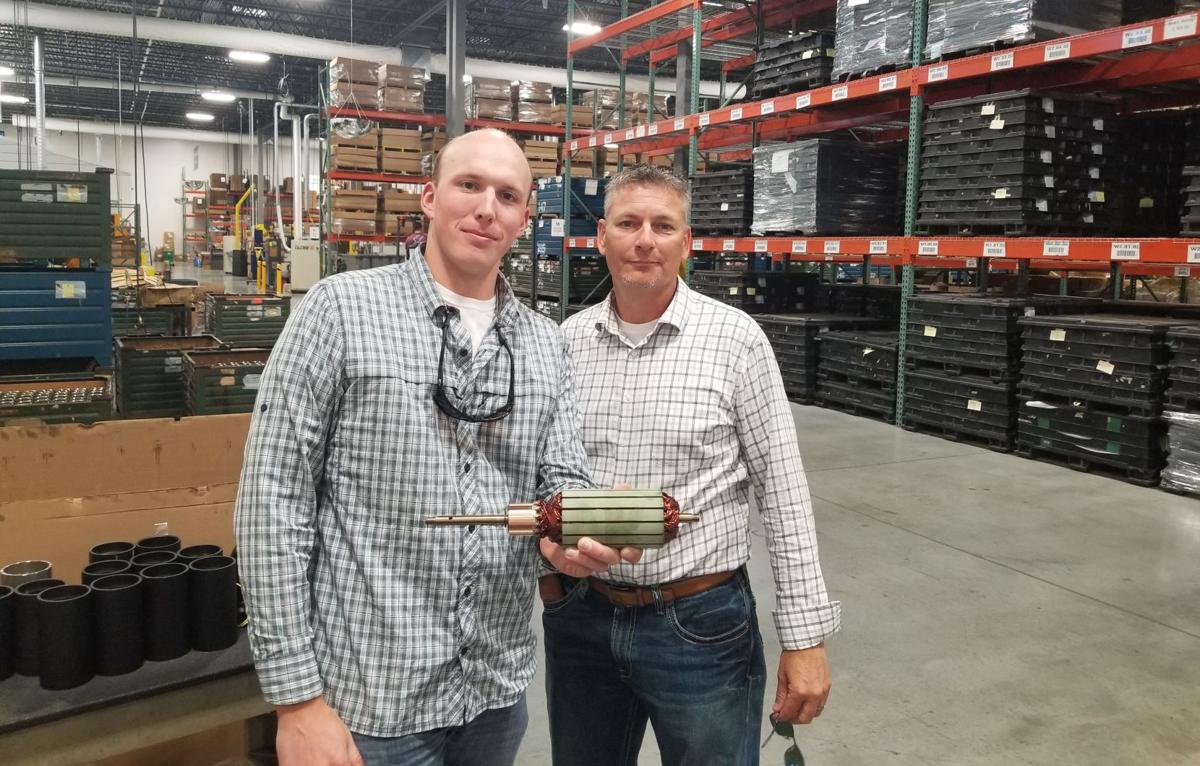 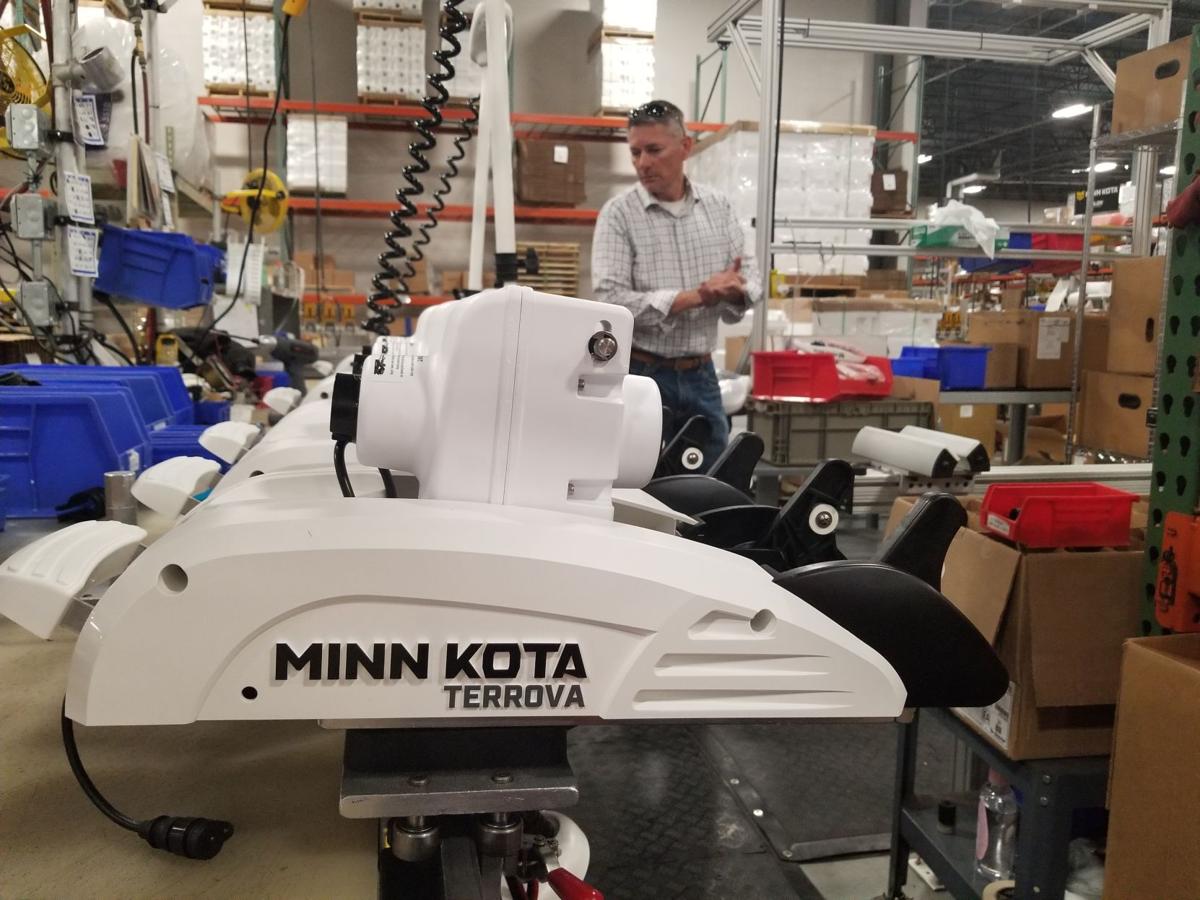 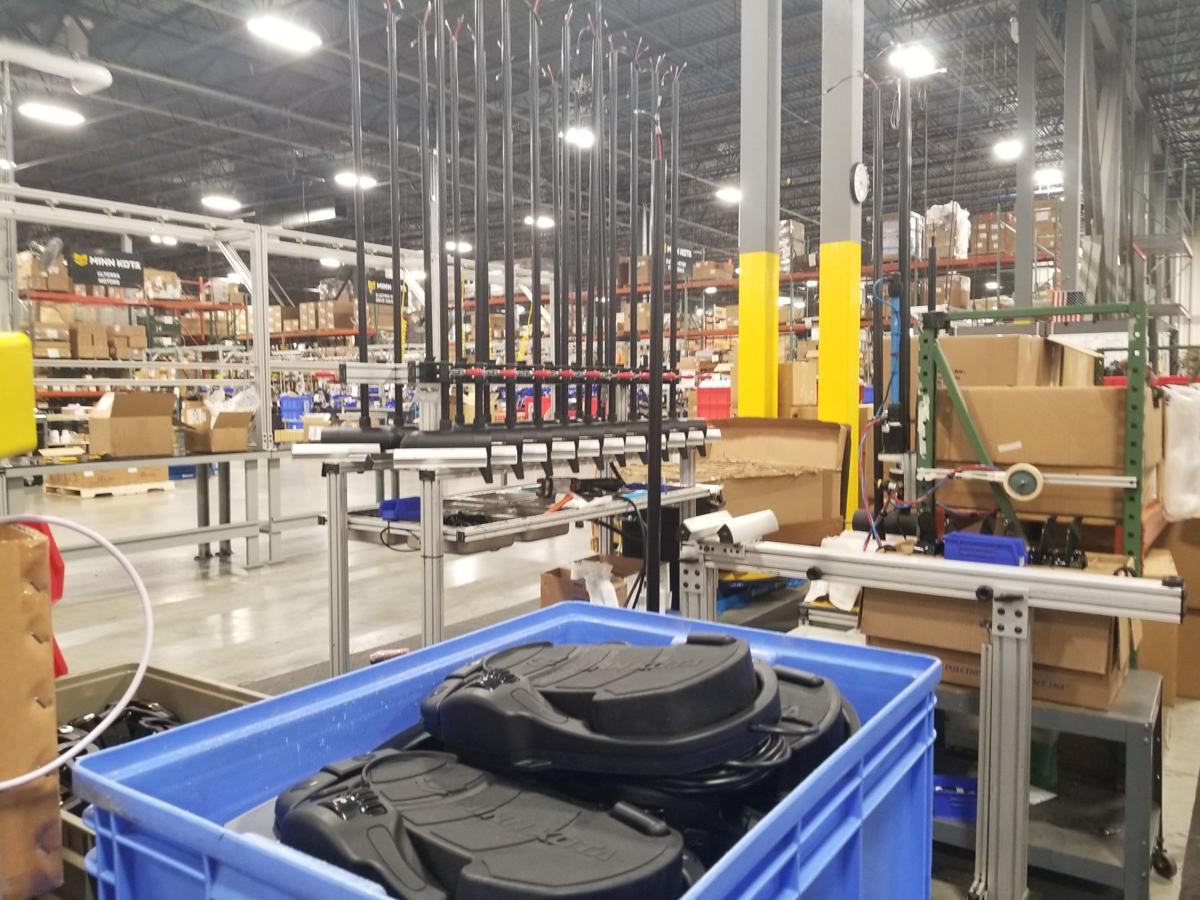 A subassembly station in the Johnson Outdoors plant on Power Drive holds Minn Kota trolling motor foot pedals and motor shafts before the units are assembled and boxed.

A subassembly station in the Johnson Outdoors plant on Power Drive holds Minn Kota trolling motor foot pedals and motor shafts before the units are assembled and boxed.

For anglers in the know, Madison Avenue in Mankato was where you could take your Minn Kota trolling motor for factory service. Now you’ll need to check out Power Drive.

The customer service at Minn Kota enjoys a fabulous reputation. Local anglers can get their electric motors repaired for rare warranty work or for issues which arose of their own doing, like damaged propellers or worn-out foot pedals.

A recent factory expansion by Johnson Outdoors, which produces the Minn Kota brand and operates the Mankato plant, has moved most of the staff and equipment to Power Drive in Mankato, just east of Highway 22. The Madison Avenue location is still operational but is now an administrative location.

Johnson Outdoors was created by Sam Johnson, part of the S.C. Johnson company and Johnson family. What began with some camping and fishing equipment that were Johnson’s fancy is today a major market outdoor player in Racine, Wisconsin, owning Jetboil camping stoves, Humminbird Depth Finders, Old Towne canoes and kayaks, ScubaPro diving equipment, Eureka tents and a number of other outdoor brands.

I was able to schedule a tour of the Power Drive warehouse with Darrell Wolf, general manager, and Matt Cook, brand manager of Johnson Outdoors’ Marine Electronics Division in Mankato.

The move east to Power Drive was a chance to increase efficiency — no more trucks hauling goods across town — as well as modernizing processes and utilizing technology in a larger and more efficient workspace. The remodeled factory warehouse was completed in December of last year and now totals 238,000 square feet.

It took seven months to move everyone and everything to Power Drive, and it’s been a change for some of the employees, but the new digs are modern and quite pleasant. Besides Minn Kota motors, the Johnson Outdoors Mankato plant also produces Canon downrigger systems and Talon shallow-water anchors, all totaling around 200 different stock keeping units.

Subassembly stations for trolling motors are spread across the warehouse’s center aisles. Even the assembly process is engineered. Quality control fail-safes include lockouts that won’t release until each screw or bolt is input and fastened, ensuring that there are no assembly errors. Even the glue is quality-control tested each day.

“We always have to be changing with the technology,” Cook said as we examined a trolling motor with built in Humminbird transducer. “Anglers want to be able to hook everything up together on a one boat network. It’s about control. ... Control your depth, control your speed, control your boat and you control your fishing.”

The days of hose clamping a transducer to your bow-mount motor are gone; today everything is synched up. You can set your course on a Humminbird depthfinder, power your boat with a Minn Kota trolling motor and present your baits at the same depth with a synched Canon downrigger.

Production equipment is designed and built entirely in house and built to company specifications. Specifications are measured on each piece of equipment produced with laser-measurement proficiency. Even the pallets used to ship motors with uneven lengths and weights are built to specific specifications, so nothing shows up broken when removed from its box.

Electric trolling motors begin with armature assembly. Many copper coils must be wrapped around a core. Each unit must be balanced, since vibration, rubbing, and heat destroy motors. Each motor has a balance test, a full function test and a leak test before it is boxed and shipped.

Wolf and Cook told me that most visitors enjoy the Talon Quality Control test. The largest Talon unit is raised 15 feet off the floor and the composite spike is extended and retrieved.

The folks working on repair and warranty are line specific technicians. The folks who assemble Ulterra, Terrova and Riptide trolling motors are the same folks who will examine malfunctioning units to troubleshoot repairs. Customer service includes four folks who handle walk-ups and a larger group that handles service telephone calls.

Johnson Outdoors Mankato operation stays busy throughout the year but has spikes at certain times. When anglers begin their seasons in the spring and when they put their boats away in the fall, more equipment comes in for service. The mid-July International Convention of Allied Sportfishing Trades (ICAST) is the formal release and launch for Johnson Outdoors’ new products, ahead of which inventory is built and then scaled up.

One of the benefits of working at Johnson Outdoors? “Fishing is encouraged for employees. We want them to use the equipment that they are producing,” Wolf said as photos of employees and their families holding up fish scroll across monitors in the break room.

There’s also something to be said for the loyalty. Johnson Outdoors has had some folks who have worked there for as long as 50 years. There is a low employee turnover rate because so many enjoy the work and stay on for an entire career.

For folks who want to see the Johnson Outdoors Mankato plant for themselves, you are in luck. This year’s Great Mankato Tour of Manufacturing includes Johnson Outdoors. The public is invited to visit on Saturday, October 5, from 9 a.m. to 1 p.m. Check out how some of your favorite fishing electronics are made.

Minn Kota uses the advertising slogan, “Every motor matters.” After you see their assembly and quality control, you’ll probably agree.