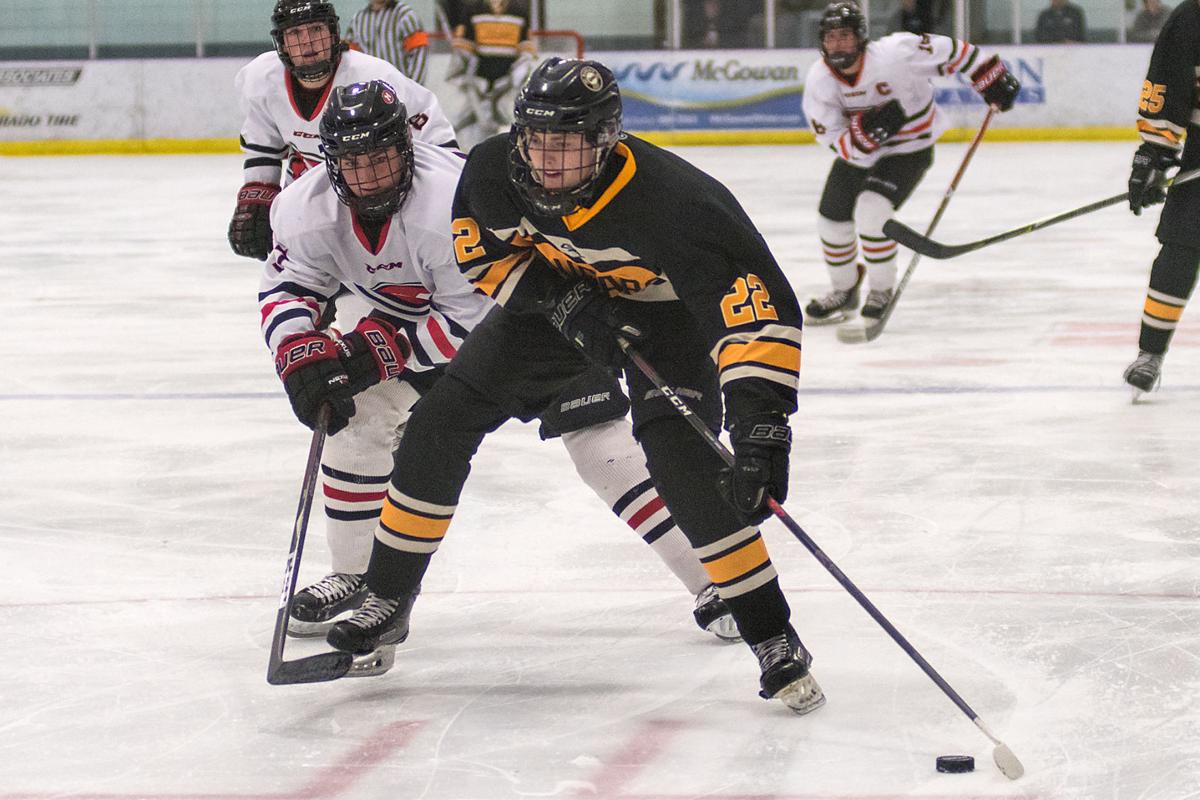 Mankato East/Loyola’s Layten Liffrig (right) is marked by Mankato West’s Wyant Fowlds. Both will be key players for their respective teams this season. 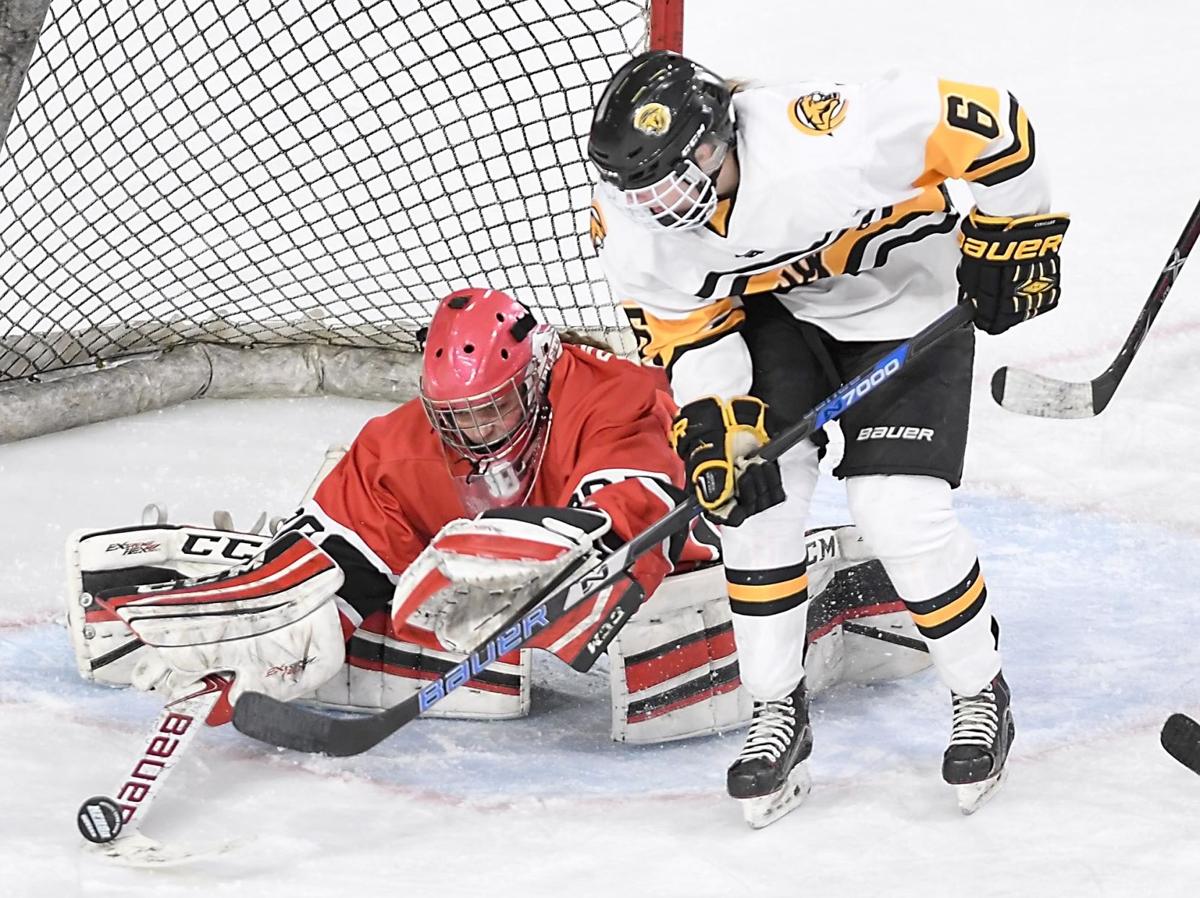 Mankato West goalie Sarah Olsen returns for a fifth varsity season in goal for the Scarlets.

Mankato East/Loyola’s Layten Liffrig (right) is marked by Mankato West’s Wyant Fowlds. Both will be key players for their respective teams this season.

Mankato West goalie Sarah Olsen returns for a fifth varsity season in goal for the Scarlets.

For most high school teams, getting to the state tournament in St. Paul is always on the bucket list at the start of a new season.

The Cougars (14-15-1) are no different, but after making it to Xcel Energy Center and losing in the quarterfinals in two of the last three seasons, the Cougars are hoping to do more than just get there.

On paper, the Cougars certainly have the talent to do it, as several of the players who were part of the first trip to state as freshmen are now seniors.

Up front, it starts with Layten Liffrig, who led East with 74 points in 30 games last season. Senior forwards Jake Schreiber and Jake Kanzenbach have also played on both state tournament teams, and will play key roles.

Senior Brett Borchardt returns as one of the top defensemen in the Big Nine.

After losing in the section final last season, West (13-14) will need to find offense after losing its top two scorers from a season ago.

However, the Scarlets certainly aren’t in need of goaltending, as senior Sarah Olsen returns for her fifth season of varsity hockey. Olsen may not break the West record for games started due to the shortened season, but her play will be key as the Scarlets hope to break through after losing in the section final the last three years.

“Sarah has the ability to steal a lot of games for us. She’s done it in the past, and we’re definitely going to be leaning on her this year for it,” West coach Shaun Reddy said. “Her leadership and her calmness ... she’s been lights out for us for five years now.”

Molly Grundhoffer, who led West with 30 goals last year, has transferred to Shattuck-St. Mary’s, which leaves a big hole up front.

Brooke Pockrandt, Caitlin Hvinden, Emily Bloemke, Allyson Grabianowski, Alexis Reddy and Eliana Palesotti are all returning varsity players who will help make up for the loss.

Defensively, Tealy Krosch and Paige Pockrandt will be key players for West.

The Scarlets open the season Thursday at All Seasons Arena against Rochester Mayo.

After going to the state tournament two years ago, last season was a bit of a rebuilding year for East/Loyola, which finished at 10-17.

Thus far, coach Amber Prange has loved the team’s energy in practice, as she feels her players have a newfound appreciation for the game after not knowing if a season would even happen.

“The amount of competition that they’ve been practicing with has just been so much fun to watch,” Prange said. “It’s almost like you know what you’re missing when it’s gone, that’s kind of how it’s felt. They’ve been going through this on and off all summer.”

Forwards Kaylee Eykyn and Evey Johnson were the team’s second and third leading scorers last season, respectively, and both will be back in key roles this year.

Senior Hannah Rigdon will be in her third season of varsity, and sophomore McKenzie Keller should play a bigger role after missing time with an injury last season. Kailey Newton, Jess Eykyn and Kalea Homich are also returning varsity forwards.

The Cougars begin their season Thursday at home against Albert Lea.

After losing to East/Loyola in the section final last season, the Scarlets (16-11-1) have another nice team this season.

“We expect a lot out of that top line because they’re going to have to carry the majority of our scoring,” West coach Curtis Doell said. “We’re pretty young and inexperienced other than those three with our varsity roster.”

“Like every high school hockey team, you start out the year wanting to go to a state tournament. I think an expectation for us is to get back to Rochester (the site of sections),” Doell said.

Season has been shortened to 13 weeks.

Teams can play 18 games, with just two per week until the last weeks of the season.

All players, coaches, officials and event workers must wear masks at all times. There is no mandatory testing before events.

There are plans for a section and state tournament, though no details have been announced.