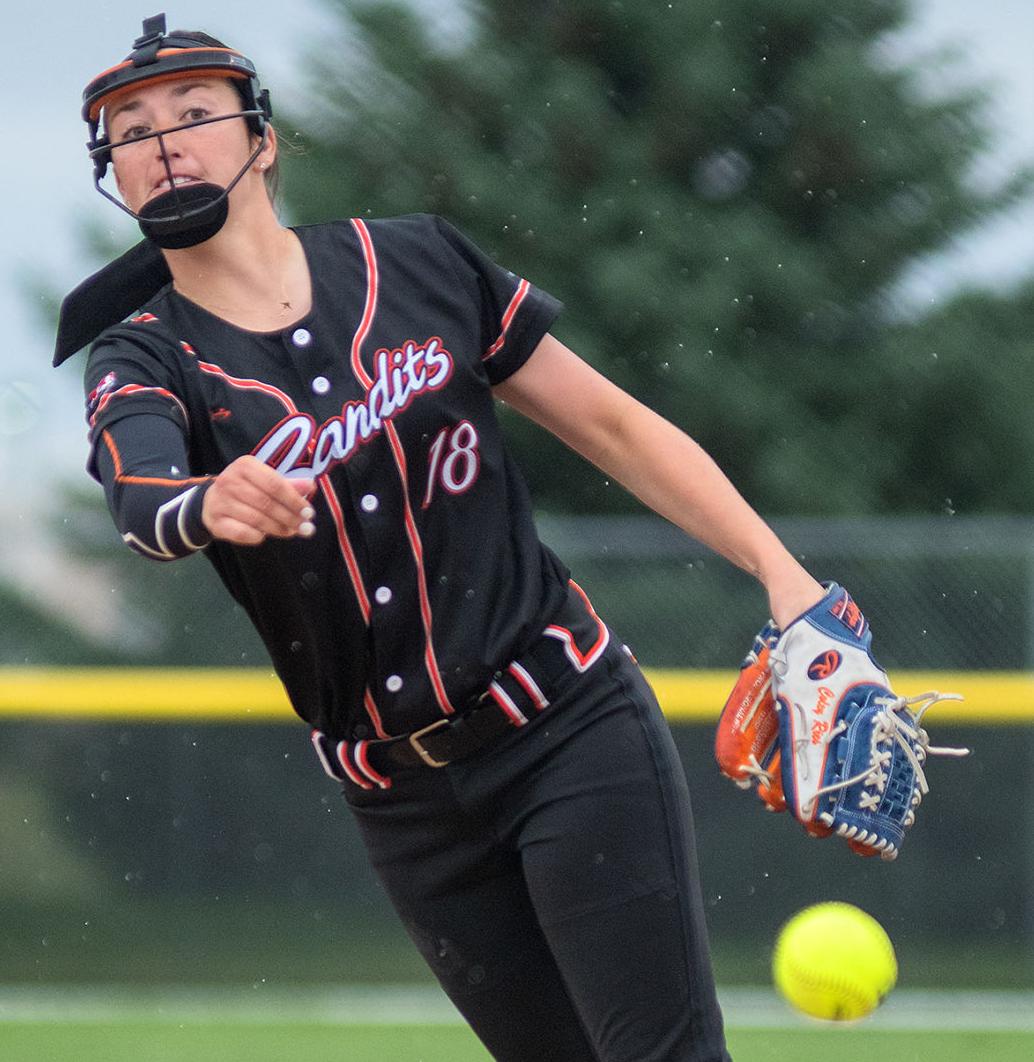 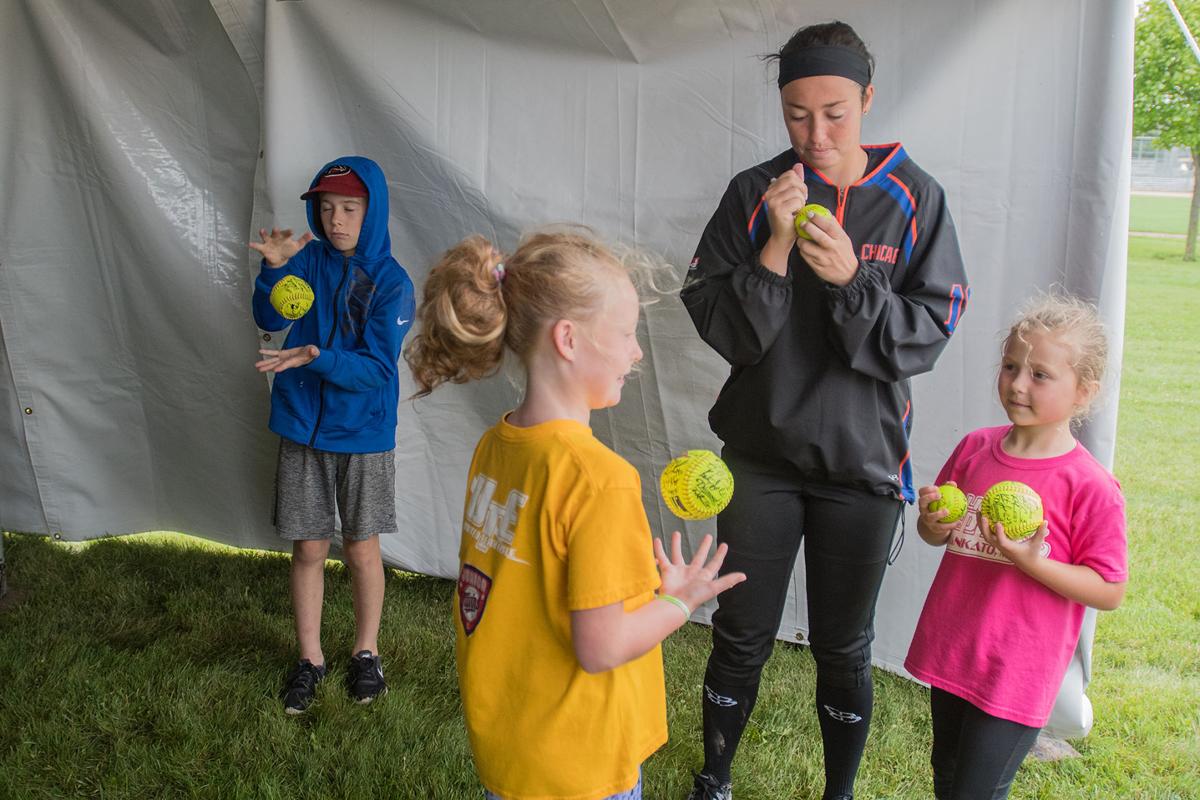 Coley Ries signs softballs for young fans in a tent at Caswell Park on Wednesday. Ries' team, the Chicago Bandits, defeated the Beijing Eagles 6-0 in a game in which Ries pitched 5 shutout innings. Photo by Jackson Forderer 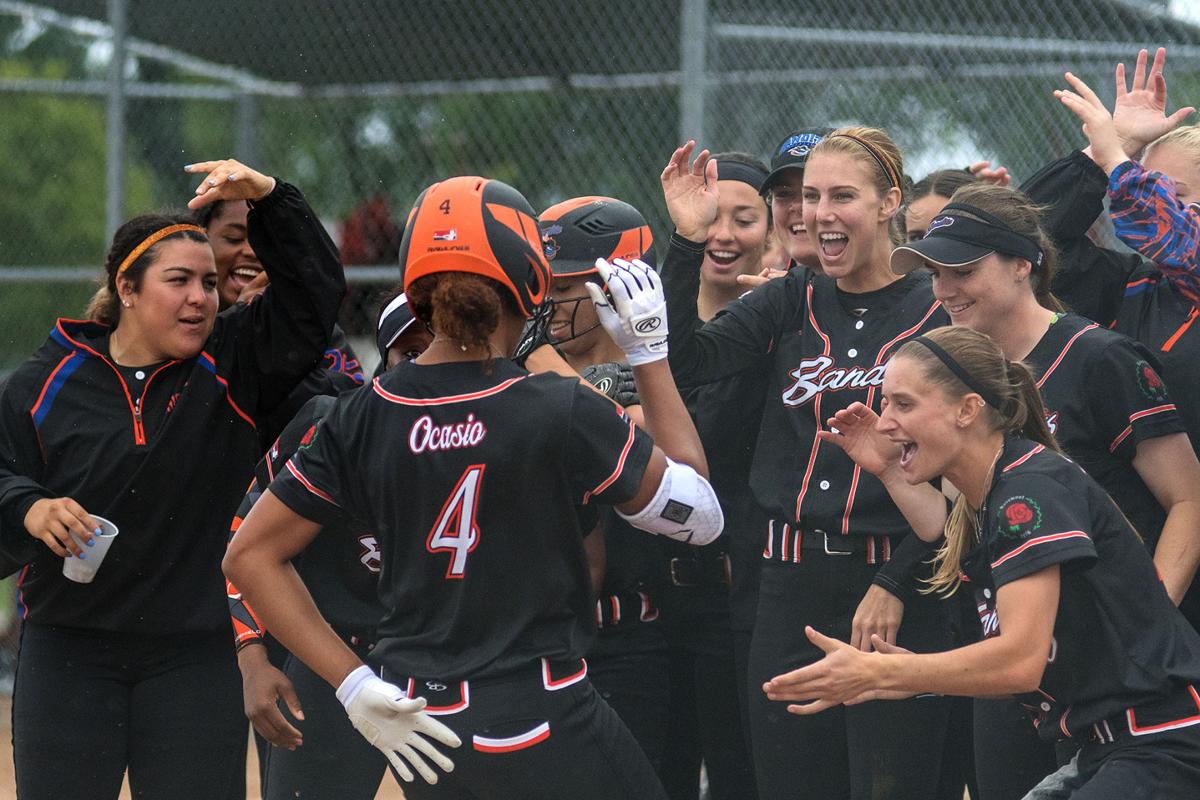 Chicago Bandits welcome Aleshia Ocasio to home plate after she hit a solo home run against the Beijing Eagles in a game played at Caswell Park. Photo by Jackson Forderer

Coley Ries signs softballs for young fans in a tent at Caswell Park on Wednesday. Ries' team, the Chicago Bandits, defeated the Beijing Eagles 6-0 in a game in which Ries pitched 5 shutout innings. Photo by Jackson Forderer

Chicago Bandits welcome Aleshia Ocasio to home plate after she hit a solo home run against the Beijing Eagles in a game played at Caswell Park. Photo by Jackson Forderer

Back when Coley Ries was growing up in Eagle Lake and then attending Mankato East High School, she never envisioned a professional softball career for herself.

The most she could hope for was a good college career, get a degree and move on with her life.

It didn’t quite turn out that way.

Ries made her first appearance as a professional in North Mankato on Wednesday, pitching the Chicago Bandits to a 6-0 win over the Beijing Eagles in an NPF (National Professional Fastpitch) league game at Caswell Park. It is believed to be the first professional women’s fastpitch regular-season game to take place in Minnesota.

The contest, billed as the Diamond Duel, is being staged in conjunction with the Mankato Peppers annual tournament at Caswell Park and will feature four more games between the teams through Saturday.

That Ries could be a part of it still has her shaking her head.

“No, I didn’t see this coming,” she said. “I didn’t even start thinking it could be a possibility until my junior year of college.”

Ries was a standout pitcher for Minnesota State at the time. She went on to lead the Mavericks to a national championship and become the NCAA Division II Player of the Year as a senior.

“My junior year I noticed that two pitchers from our conference had made it to the NPF,” she said. “My senior year I started emailing all the team in the league like crazy. I was, basically, begging for a tryout.”

The Texas Charge gave her one and signed her on the spot last June. She pitched OK, but the franchise folded at the end of the season and she thought that might be the end of her pro career.

“I started emailing all the teams again and Chicago decided to take a chance on me. I signed with them in November.”

The Bandits are 14 games into the season and are undefeated. Ries is 4-0 for a squad loaded with nine pitchers.

Playing for the Bandits is a fulltime job, but, only during the season. When the season ends in mid-August, the players go back to their non softball-playing lives. Ries intends to return to MSU in the fall to pursue a masters degree in education and serve as a grad assistant for the softball team.

“At some point I’d like to be a college coach,” she said. “But I’m not worried about that now. I’m having too much fun.”

Against Beijing on a rainy Wednesday afternoon, Ries started and pitched five innings, allowing four hits, striking out three and walking one. Perhaps more importantly, she was given a hearty round of applause when she first took the mound on a very familiar field.

“I had chills,” Ries said of the ovation. “I had to block it out or I was afraid I might lose my composure.”

After the game, both teams signed autographs for fans. Matt Mangulis, the vice president for the Peppers program and one of the organizers of the event, was pleased with the opening day of the Diamond Duel.

“Considering the last-minute time change and all the rain I think we had a pretty good turnout,” he said. “We had 220 people attend today and that was more than the number of tickets we sold online.

“We’re a youth non-profit organization so we felt this series was a way to help empower our young players and let them see the possibilities out there. The professional players are outstanding role models for the kids in our program.”

The Diamond Duel continues with a 7 p.m. rematch tonight, a 4 p.m. doubleheader on Friday and then the series finale at 8 p.m. Saturday.