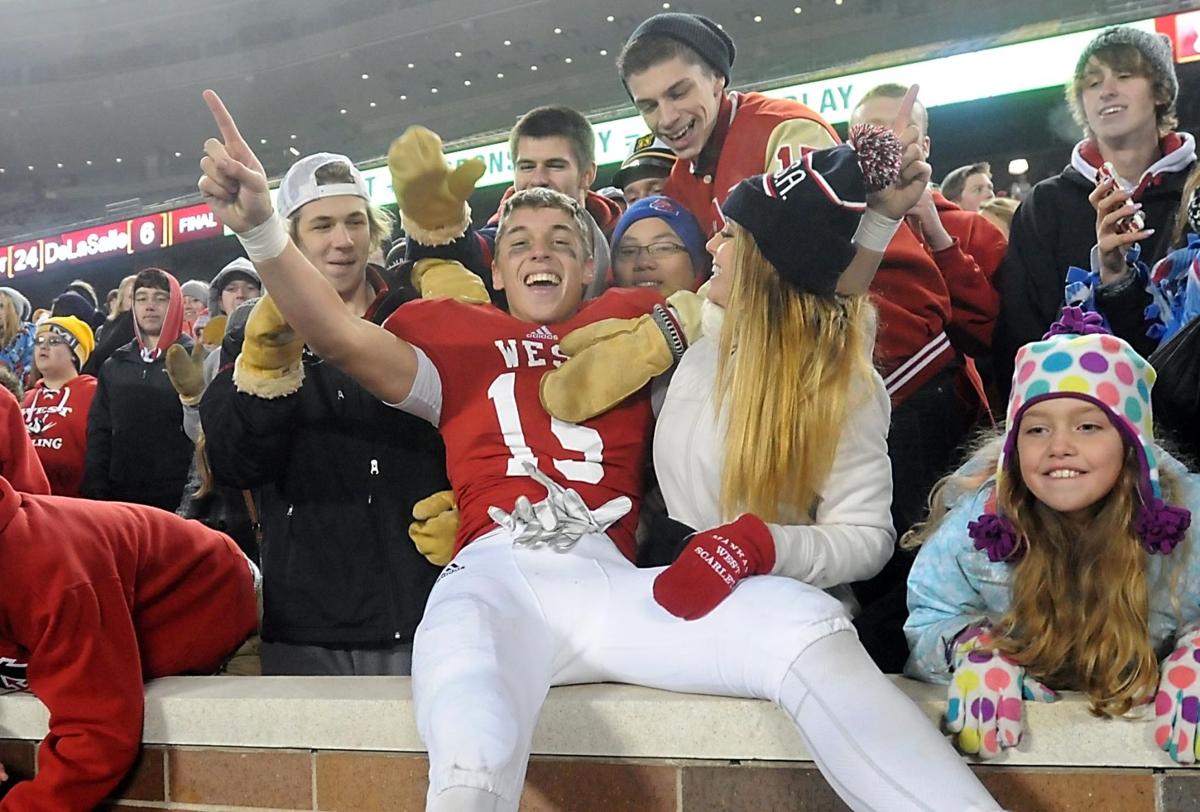 Mankato West senior Jon Pytlak jumped into the crowd after a 42-19 win over Simley in the Class AAAAA championship game in 2014 at TCF Bank Stadium. 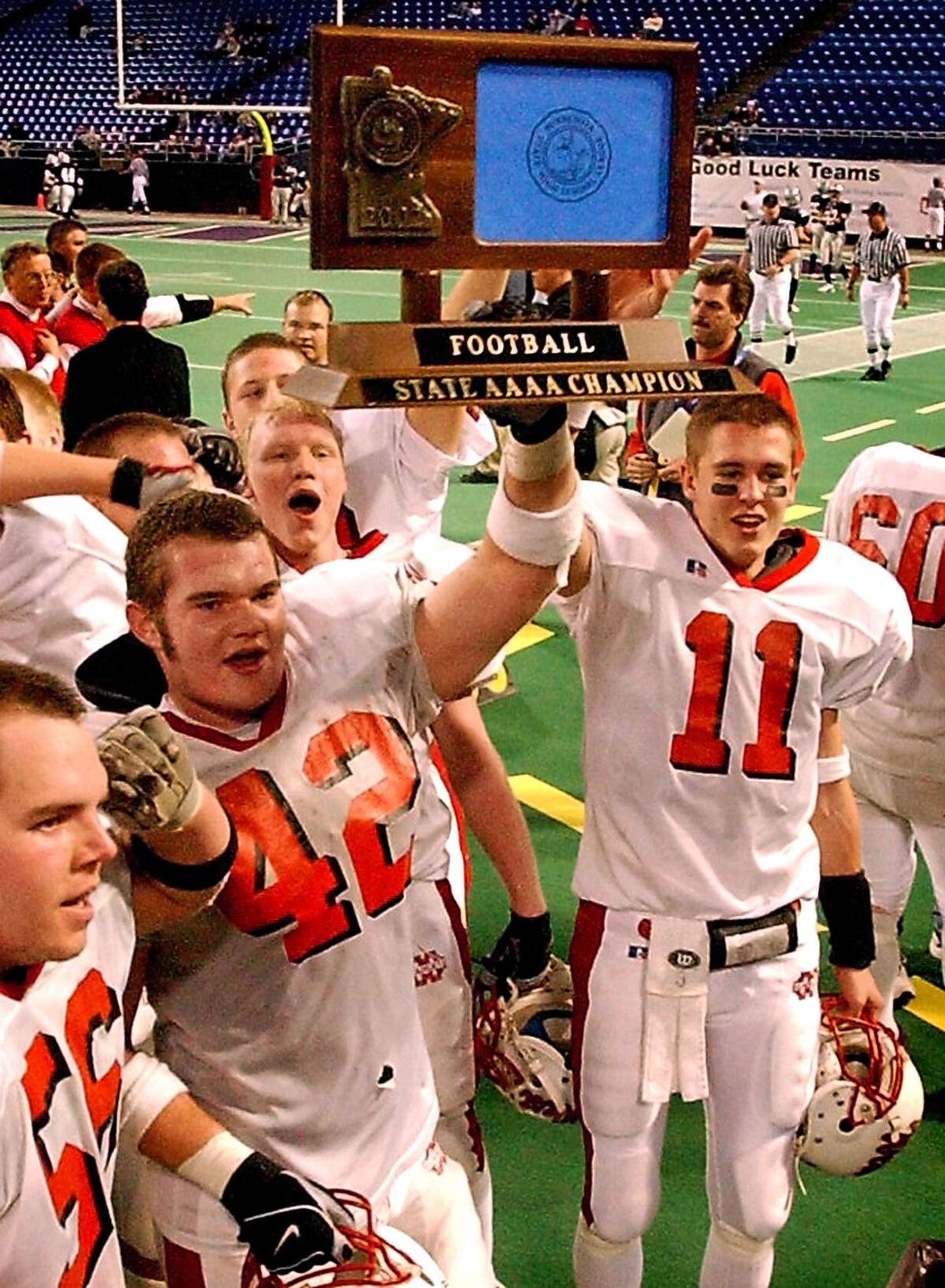 Mankato West’s Mitch Salsbery (42) and Jordan Stolp (11) celebrate with teammates after defeating Mahtomedi 17-7 in the 2002 championship game at the Metrodome.

Mankato West senior Jon Pytlak jumped into the crowd after a 42-19 win over Simley in the Class AAAAA championship game in 2014 at TCF Bank Stadium.

Mankato West’s Mitch Salsbery (42) and Jordan Stolp (11) celebrate with teammates after defeating Mahtomedi 17-7 in the 2002 championship game at the Metrodome.

The Mankato West football program had struggled for years to find some success, but in that special season, the Scarlets won a state championship.

More state titles followed in 2002, 2008 and 2014. On Saturday, West tries to add to that legacy in the Class AAAAA championship game against Mahtomedi at U.S. Bank Stadium.

The Scarlets were new to football success that season, having won just two games in a four-season stretch from 1993-96.

But the Scarlets reached the section final in 1998 to start building some momentum.

West lost four of its first six games in 1999, then got on a roll and won seven straight games to reach the championship game against Cambridge-Isanti at the Metrodome.

“We started 2-4, but we kept telling the guys that all of our goals were still there,” said Rick Sutton, who was in his sixth season as the West coach. “We could have just packed it in or we could go back to work and get after it. The kids responded very well.”

In the championship game, Calen Wilson and Chris Boyer both overcame early mistakes to have big games. Wilson fumbled a punt early in the game that allowed Cambridge-Isanti to tie the game, but later, he returned a punt for a 93-yard touchdown, a Prep Bowl record that still stands.

“I was extremely disappointed,” said Wilson, who still lives in North Mankato and works for an IT consulting company. “I had scored a touchdown in the game before. I didn’t lose confidence, but I wanted to help the team. A lot of things had to go right for that to happen.”

Boyer rushed 29 times for 202 yards and three touchdowns, overcoming a fumble that was returned for a touchdown that tightened the game in the second half.

West held on to win 35-28, capping a shocking, exciting season that few saw coming but many enjoyed.

“I don’t think anybody expected it except for the guys on the team,” said Sutton, who is now the co-head coach at Farmington. “It’s hard to explain to anybody who hasn’t experienced it. It was an ecstatic feeling.”

Wilson, who was able to get to the homecoming game this season with his 10-year-old son, will be watching today on TV. He’ll pull out an old videotape of the 1999 championship game and relive some of the memories.

“We never expected to win a state championship,” Wilson said. “We just kept taking it one game at a time, and a lot of guys stepped up. We just wanted to play one more game. I didn’t realize at the time how special that was, but it was magical.”

Just three years after winning the first state championship in program history, the Scarlets were back in the title game, facing Mahtomedi at the Metrodome.

“That 1999 team showed us how to work hard, and they set the standard,” said Mitch Salsbery, who had 10 tackles and three sacks in that game. “In 2002, the coaches had a blueprint, and they put all the pieces in place.”

The Scarlets lost Nick Wilson, the top rusher and receiver, in the state semifinal when he suffered a leg injury in a victory over Detroit Lakes. But the defense was very good that season, and even better in the championship game.

“We were so fast on defense, and that really showed up on the turf,” Sutton said. “The first (state championship in 1999) was a shootout, but that was a defensive battle from the start.”

West led 17-0 at halftime, with one of the touchdowns coming on Nick Jost’s interception return. The Scarlets limited Mahtomedi to just 35 yards on 21 plays in the first half.

Mahtomedi scored early in the third quarter, but the Scarlets held on for the 17-7 win.

“Even though we won it (in 1999), a lot of people were looking past us,” Sutton said. “When you look back, you realize how difficult it is to get there. Teams like that don’t come along too often in most communities.”

Salsbery, who works in the sports medicine department at Ohio State in Columbus, Ohio, was on the 1999 team but didn’t play much.

“I remember all the hard work we put in,” Salsbery said. “We didn’t have a lot of guys on that team, but we knew that the preparation before the season would pay off.”

“We had very high expectations for that group,” said coach Mark Esch, who was in his third season at West. “We got beat by Owatonna (in the last regular-season game), and that was the wakeup call we needed.”

The game wasn’t that comfortable, however. The West defense made a goal-line stand late in the second quarter, then responded with a 99-yard drive that was only the fifth in Prep Bowl history at the time. So instead of a 13-7 lead at halftime, the Scarlets led 21-0.

“We had a lot of playmakers on that team,” said Paul Berndt, who tied a Prep Bowl record with four rushing touchdowns. “If they wanted to take away the run, we could pass. I remember getting that medal and looking up in the stands and seeing my family and friends. It doesn’t get much better than that.”

The game got a little tighter in the second half but the Scarlets held on.

“I just remember the relief,” said Esch, who is now the head coach at Minnetonka. “We had a two-week break before the championship game that year, and that seemed like a long time. I was very proud of the kids. That group worked really hard and did everything they could to get the results they wanted.”

Berndt said the community rallied around that team, which made it even more special.

“I remember the bus ride back to town after the game, looking back and seeing headlights as far as I could,” said Berndt, who now works at a family clinic in Parkston, South Dakota. “It was pretty cool.”

The Scarlets, with a senior group of 20, won the first seven games of the season and seemed destined to play for another state championship, but a loss in the final game of the regular season could have changed that. There were also close calls in the section championship and state semifinals.

“That was a super talented group,” Esch said. “We had been watching those kids since fourth grade.”

The Scarlets eventually got to the championship game against Simley at the University of Minnesota’s stadium, then known as TCF Bank Stadium.

“I remember the bus ride up to the game,” said receiver Connor Watts, who now is a banker in St. Louis Park. “It was real quiet. The guys had butterflies.”

Simley scored on the first drive of the second half to lead 21-19, but West controlled the second half, running 37 plays, quarterback draws and straight-ahead runs by the backs, to 22 for Simley.

West had 422 yards of offense, with 230 yards on 51 carries to wear down Simley in a 42-19 victory. Van Neils rushed for 128 yards and a touchdown, and Ryan Schlichte completed 17 of 25 passes for 192 yards. He accounted for 63 touchdowns, passing and rushing, that season.

“After (losing in the 2013 section championship), the seniors came together and said this was not going to be us again,” Watts said. “We didn’t want to have that feeling again.”

Watts made nine receptions for 108 yards and scored three touchdowns.

“This time of the year, my wife will pull out the DVD and we’ll watch it,” Esch said. “Those are memories that can never be taken away.”

With state championships with two different head coaches at two different venues, the Scarlets hope to add a third coach at a third site on Saturday when J.J. Helget leads his team into U.S. Bank Stadium at 4 p.m. to take on Mahtomedi.

The Scarlets thought they had a championship-caliber team last season, but the pandemic was an opponent that nobody could overcome. West won all six games last fall, including a playoff victory over rival Chaska.

While those victories didn’t lead to a state championship, it did motivate the current team, which includes 23 seniors, to continue an 18-game winning streak and attempt to finish the program’s first undefeated “full” season.

“It’s such a grind,” Helget said. “We’ve been at it since June, and now we’re in Game 13. When you get to this point, you just want everyone healthy. It’s exciting. It’s rewarding.”

Helget was an assistant coach on the 2008 and 2014 teams so he’s already experienced the success and has passed on some wisdom to the players.

“We talked about the highs and the lows,” he said. “It’s a different experience playing in that game, and you have to understand that you’re playing very good teams. Those were some special teams (that won championships).”