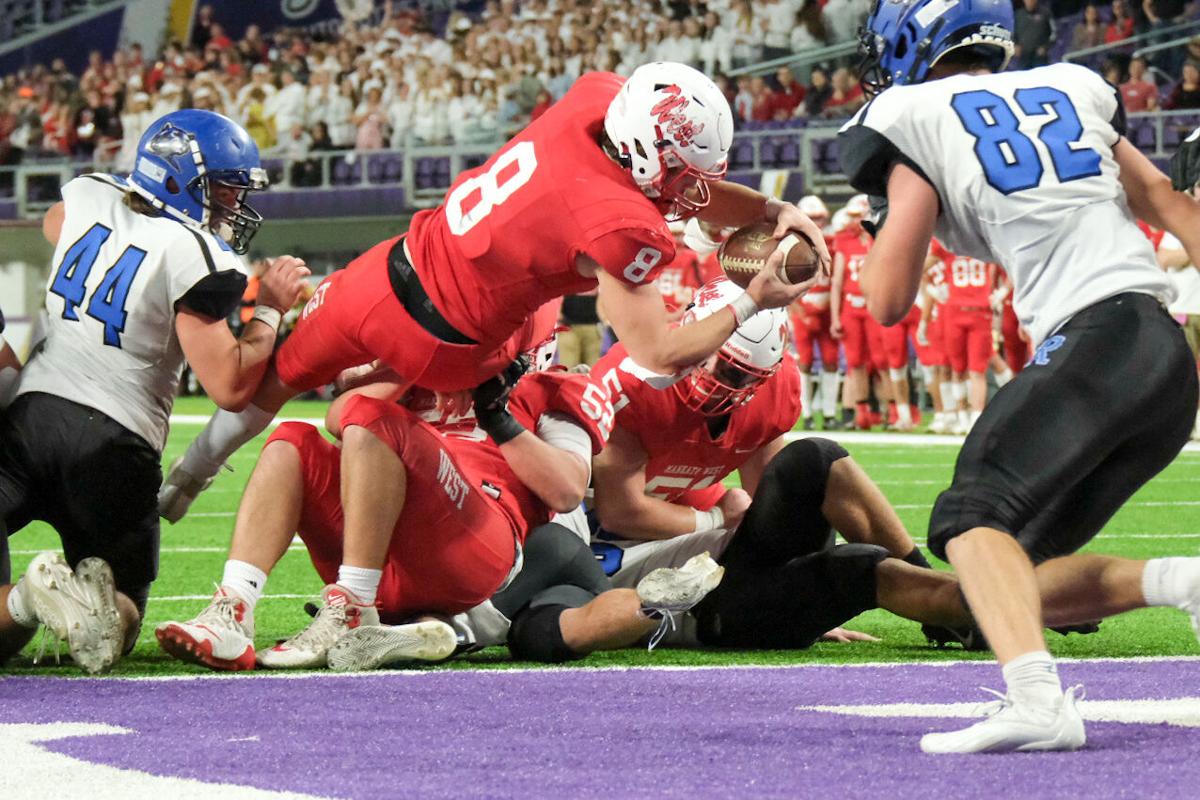 Mankato West’s Ryan Haley stretches the ball across the goal line during the first half of Saturday’s Class AAAAA semifinal game at U.S. Bank Stadium. 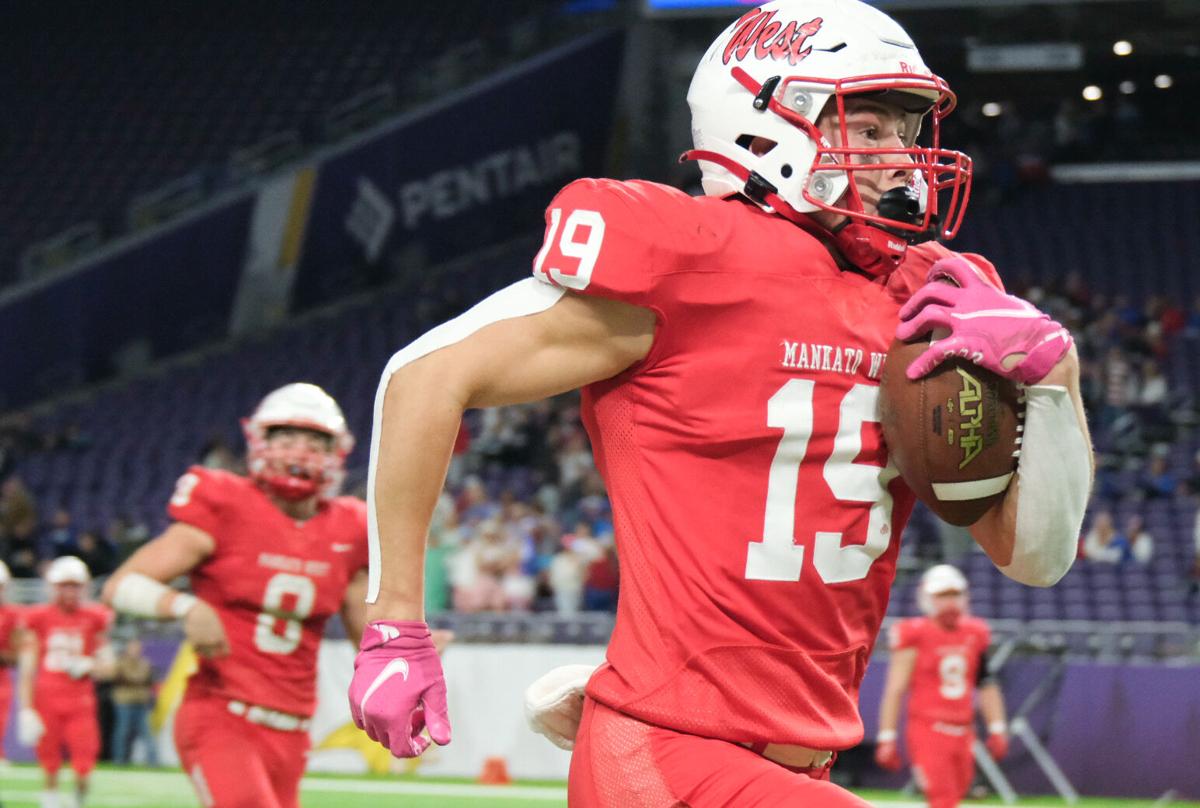 Mankato West’s Peyton Goettlicher races down the sideline with a 54-yard interception return in a 42-7 win over Rogers in the Class AAAAA semifinals Saturday at U.S. Bank Stadium. 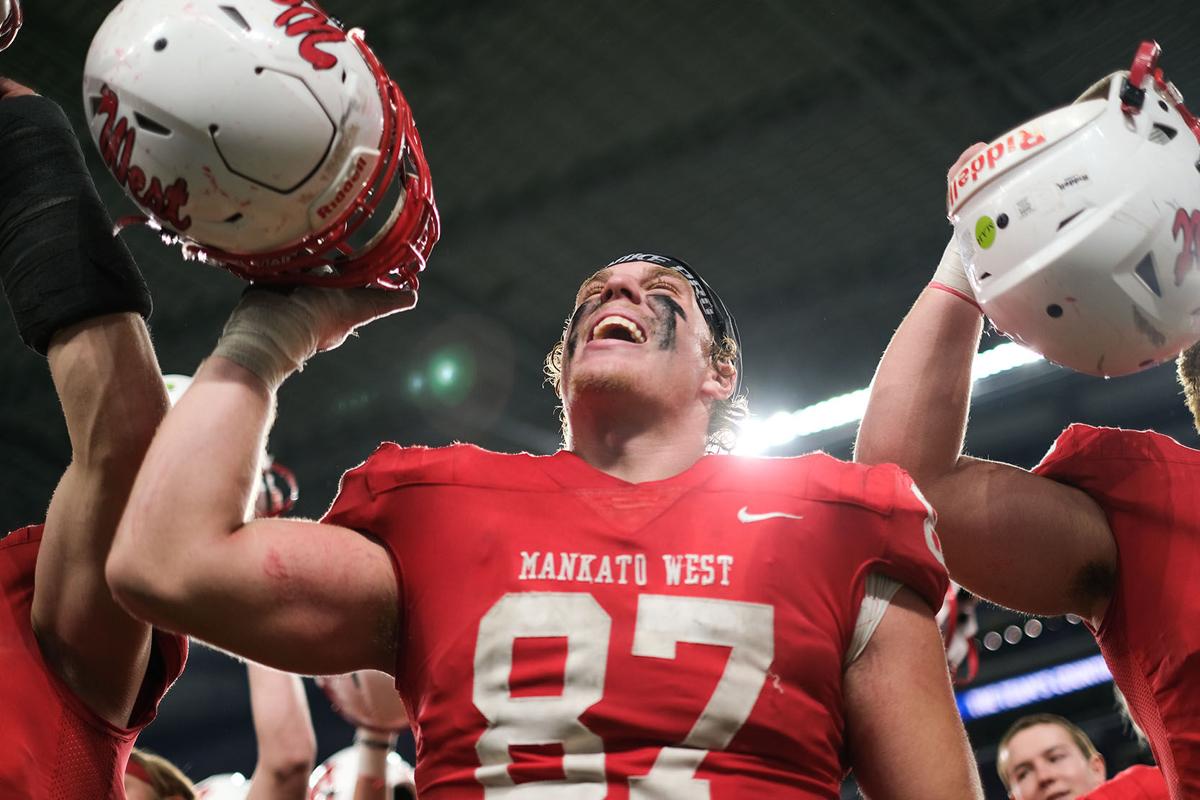 Mankato West’s Ryan Haley stretches the ball across the goal line during the first half of Saturday’s Class AAAAA semifinal game at U.S. Bank Stadium.

Mankato West’s Peyton Goettlicher races down the sideline with a 54-yard interception return in a 42-7 win over Rogers in the Class AAAAA semifinals Saturday at U.S. Bank Stadium.

Ryan Haley is a linebacker and running back.

On Saturday, the Mankato West senior scored two touchdowns on offense and another on defense in the second quarter, helping the Scarlets defeat Rogers 42-7 in the semifinals of the Class AAAAA playoffs at U.S. Bank Stadium.

“Usually, I’m good for one touchdown, and that’s a short-yardage play,” Haley said. “To get three like that ... I have to thank my teammates. It’s not my credit, it’s the team’s credit.”

Rogers scored first, but West answered on the next possession as quarterback Zander Dittbenner lofted a 40-yard touchdown pass to Mekhi Collins. Drew Smook’s first PAT tied the game at 7 with 1:21 remaining in the first quarter.

“We didn’t score (on the first drive), but we were able to see what we could do,” Dittbenner said. “We knew we could go up top to Mekhi when they were playing one-on-one with him.”

West’s next possession lasted eight plays and covered 62 yards, with Haley scoring on a 5-yard run. Smook’s PAT put West ahead for good at 14-7 at 8:07 of the second quarter.

“They came out and kind of punched us in the face in the beginning,” West coach J.J. Helget said. “But our guys persevered. We talked about the ups and the down, and it was nice to have to overcome some adversity.”

The West defense started to solve Rogers’ running attack, and a big hit on the quarterback knocked the ball loose. Haley recovered the ball in mid-air in the end zone for another touchdown just 50 seconds later.

West got the ball back at the 12-yard line with 1:57 to play before halftime. Dittbenner broke a run up the middle for 78 yards, getting tackled at the Rogers’ 11. Three plays later, and with 9 seconds remaining in the quarter, Haley ran in from the 1, making it 28-7.

“(Rogers’ blockers) were getting on me, and the defensive ends made some nice adjustments (after the first drive),” Haley said. “We kind of shut them down after that.”

In the fourth quarter, West drove 49 yards in 14 plays, taking more than 6 minutes, to score on Dittbenner’s 3-yard pass to Collins for a 35-7 lead.

Peyton Goettlicher had a 54-yard interception return with 2:25 to go to finish the scoring.

The Scarlets totalled 321 yards of offense, with 202 yards on 36 rushing attempts. Dittbenner was 13 of 21 for 119 yards, and Collins caught eight passes for 80 yards. Dittbenner was also West’s leading rusher with 71 yards.

Haley finished with nine tackles, and defensive ends Gannon Rosenfeld and Gibson Blackstad each made seven tackles. Blackstad had two sacks, and Rosenfeld had one. Trenton Fontaiine recovered two fumbles.

“Our defense has been phenomenal all season,” Helget said. “It’s the strength of our team. When they fly around, they’re going to get those turnovers.”

In the last three games, against Chaska, St. Thomas Academy and Rogers — teams that had a combined record of 31-1 — West has a 98-21 scoring advantage.

“We saw that we were in the tough side of the bracket,” Collins said. “We’ve shown how good we are. We’ve been rated No. 1 all season.”

West (12-0), which has four state championships in program history, will play Mahtomedi at 4 p.m. Saturday for another title at U.S. Bank Stadium.

“I saw a lot of the guys do it before me,” said Dittbenner, who remembers Ryan Schlichte leading the 2013 team to a state championship. “I was just a middle-schooler, thinking I want to do that. Now I have a chance. It’s surreal.”