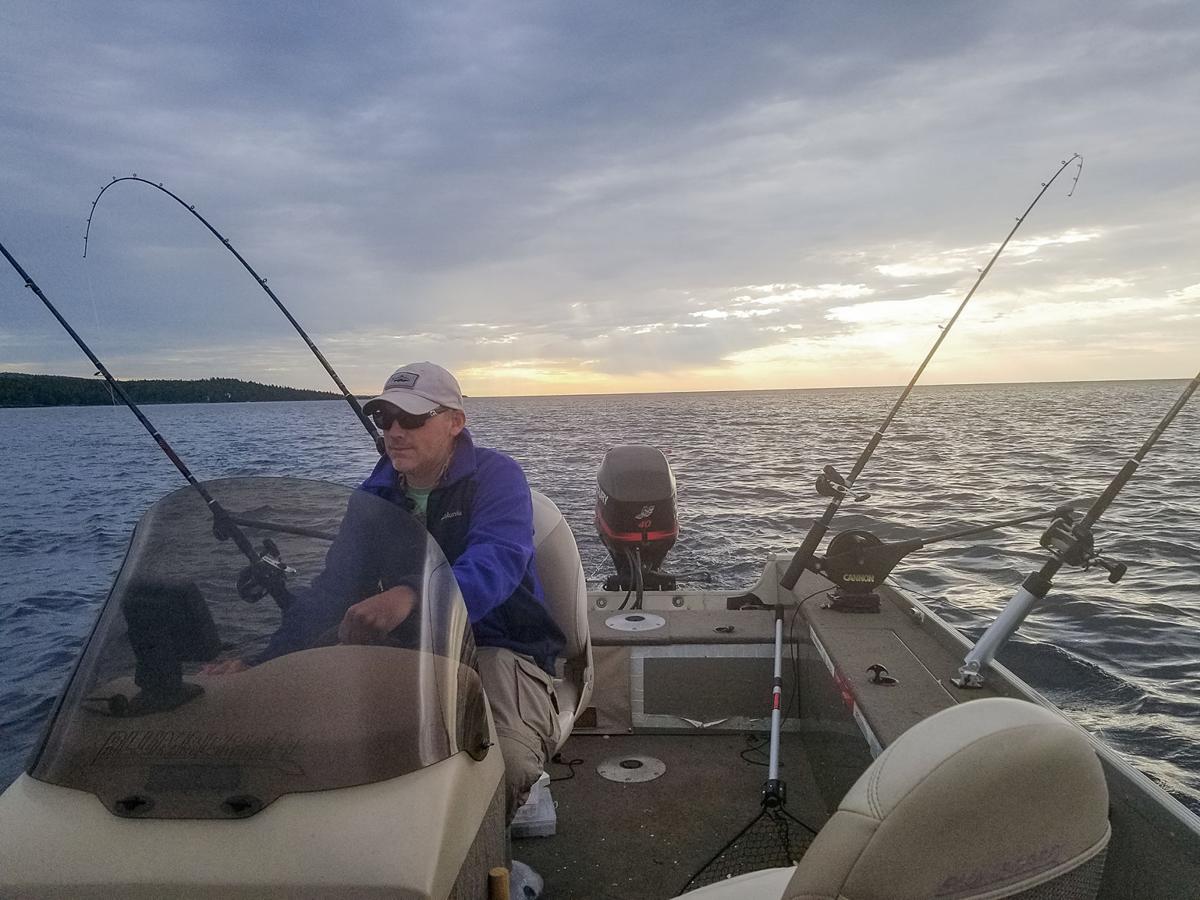 Trolling Lake Superior means getting out two lines and trying to put a bait in front of a lake trout or salmon. July is when the salmon bite on Lake Superior gets good. 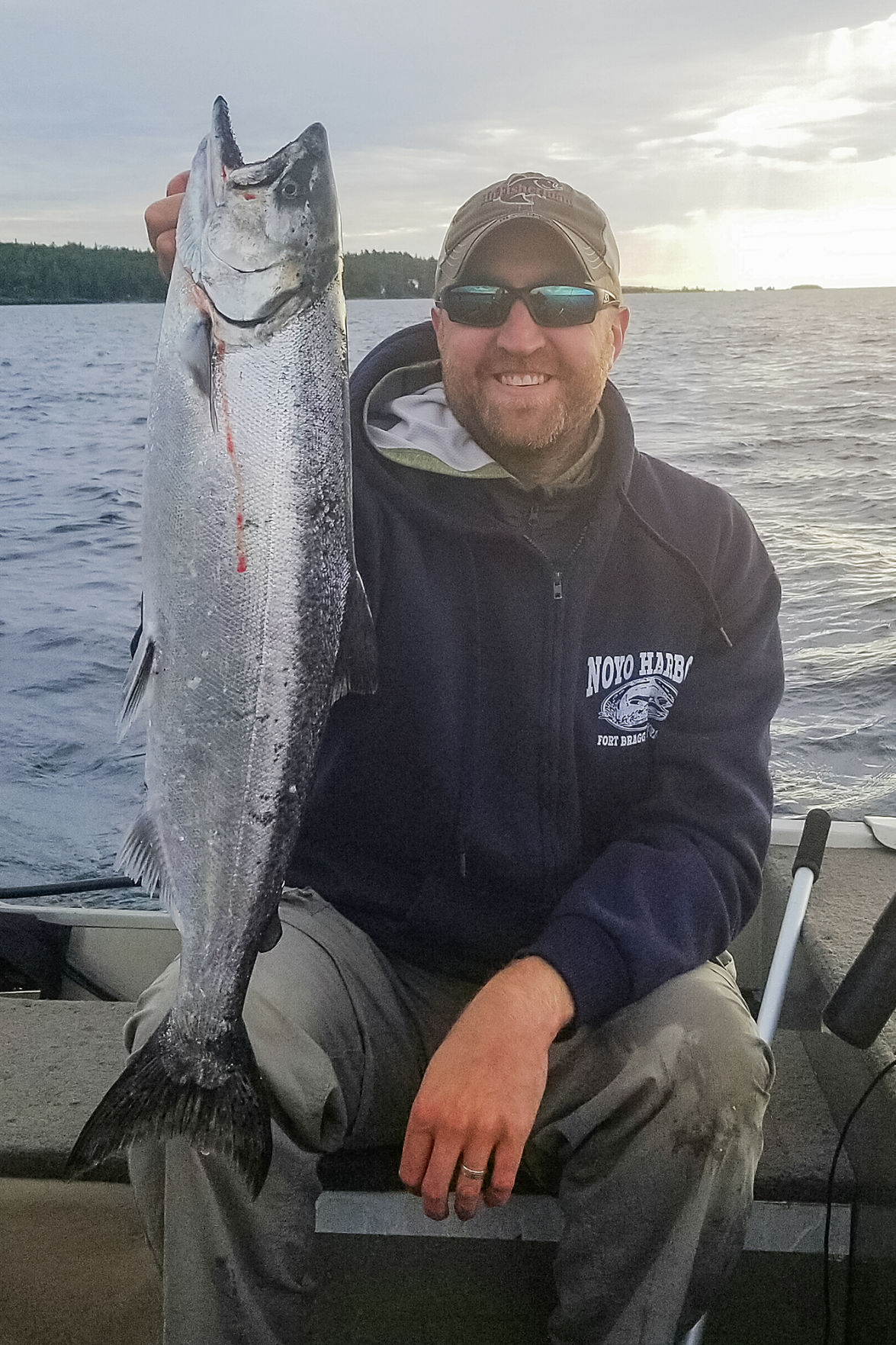 Free Press columnist Scott Mackenthun holds a Chinook salmon, about the average size for Lake Superior. First stocked in Superior in 1974, Chinook salmon are native to the Pacific ocean and helped provide exceptional fishing in the Great Lakes when lake trout stocks crashed.

Trolling Lake Superior means getting out two lines and trying to put a bait in front of a lake trout or salmon. July is when the salmon bite on Lake Superior gets good.

Free Press columnist Scott Mackenthun holds a Chinook salmon, about the average size for Lake Superior. First stocked in Superior in 1974, Chinook salmon are native to the Pacific ocean and helped provide exceptional fishing in the Great Lakes when lake trout stocks crashed.

Forecasting weather in Grand Marais, Minnesota is kind of like throwing a dart at a chart of possible weather conditions. You never know what you are going to land on, and like a lot of Minnesota weather, if you don’t like what you presently have, just wait a little bit.

Fish Biologist and avid outdoorsman Matt Weberg and I made plans to fish beyond the Grand Marais harbor for salmon, an annual mid-July activity that heats up concurrently with the top layer of Lake Superior’s waters. When the water surface reaches 50 degrees Fahrenheit, coho and occasional chinook salmon show up, and a fair to good bite emerges.

“When you see the access full of trailers, you know the salmon bite is on,” Weberg told me. We monitored the weather for a Saturday or Sunday tilt, with wind forecasts looking best for early in the morning Saturday.

When Saturday morning arrived and Weberg pulled into the harbor with his Alumacraft boat and 40 horsepower motor, the leaves on the hillside poplar trees were shaking with a good bend in the tree’s tops.

“I woke up and heard the wind blowing and thought I should just roll over,” Weberg said with a smile. Luckily for both of us, the wind was coming off the hillside to the north, meaning we were on the leeward side of Superior and would be in waves small enough to manage. Each of us managed to get ourselves out of bed and dressed for the occasion, motivated by daydreams of silver salmon fights on trolling gear.

Nosing his boat out of the protected harbor, Weberg gave me the rundown while rigging up equipment. “These fish stay up in the warm water up high and chase their prey around. The beauty of it is you don’t have to go real far, just a mile in either direction is what I typically do and never too far off shore,” he said.

“If there are fish around, you’ll usually know pretty quick. The coho and chinook are the draw, but I’ve caught plenty of small lake trout up high too,” he noted. Weberg deployed two downriggers to 30 feet and then set a planar board with an artificial lure on each side of the boat.

Clipped to the board was 60 feet of line and a small spoon or stickbait. The planar boards banked hard against the wind and waves just beyond the boat’s wake, bobbing in the maelstrom as they went. A couple times clips came undone on the downriggers, a moment that had us thinking fish until the lines came up slack.

It wasn’t until we were near a turn-around spot that our first fish showed up ripping line and drag off the port side downrigger rod. I pulled the rod from the holder and held on.

A fully deployed trolling rig has to stay in motion to not be tangled, so I took my time slowing the fish and stopping it before reversing the battle and gaining line. A feisty chinook salmon took a purple dotted spoon. I managed to nearly glide the fish into one of the planar board lines, before Matt expertly scooped the fish with a landing net in a quick and efficient stab behind the outboard motor.

Weberg and I discussed the amazing story of Great Lakes salmon. Pink, chinook, coho, and Atlantic salmon were all stocked in the 1950’s, 60’s, and 70’s, with only Atlantic salmon having a native claim in the upper Great Lakes. The Pacific salmon (pink, chinook, cohos) prospered while lake trout crashed during years with heavy sea lamprey abundance and commercial overharvest. The salmon prosperity came on introduced forage — rainbow smelt and alewives.

Specifically in Minnesota, Superior was stocked with chinook salmon from 1974-2006, ceasing as lake trout populations recovered. Today’s chinooks are now the product of natural reproduction from other states and provinces.

Coho salmon were stocked from 1969-1972, but were quickly stopped when the stockings did not meet management goals. Today’s cohos are the product of natural reproduction and are naturalized throughout the lake.

Pink salmon were introduced to Superior in the Current River in Ontario in 1956. Today they are naturalized like the coho and a number of Minnesota North Shore streams get a run of these fish in the fall.

One of the planar board rods got to arcing not half an hour after hooking up with the Chinook. I handed the rod to Captain Weberg, who cranked a chrome colored coho salmon aboard. “Get yourself a limit of these and there is no one that will eat better than you in the state,” Weberg told me.

He was right. In an unconscionable and I will even say foolish moment of kindness, Weberg yielded his fish to my cooler. Grilled with some lemon, pepper, garlic, and salt, I ate as well as any meal eaten all year. I’m more than happy to pounce on such generosity if it’s ever offered again!

After the second salmon was in the livewell, the winds settled down, the lake became nearly placid, and with a gorgeous day on tap, we decided to bag the trip and head for the harbor. Our two fish would be our total.

Our surface temperature readings were 43 degrees, telling us that the summer salmon season was only starting. The strong North wind had pushed the warm water back down or offshore.

Given the unpredictable weather of Grand Marais, salmon anglers only needed wait a little while longer for the water to warm again and the glorious days of summer fishing to return.