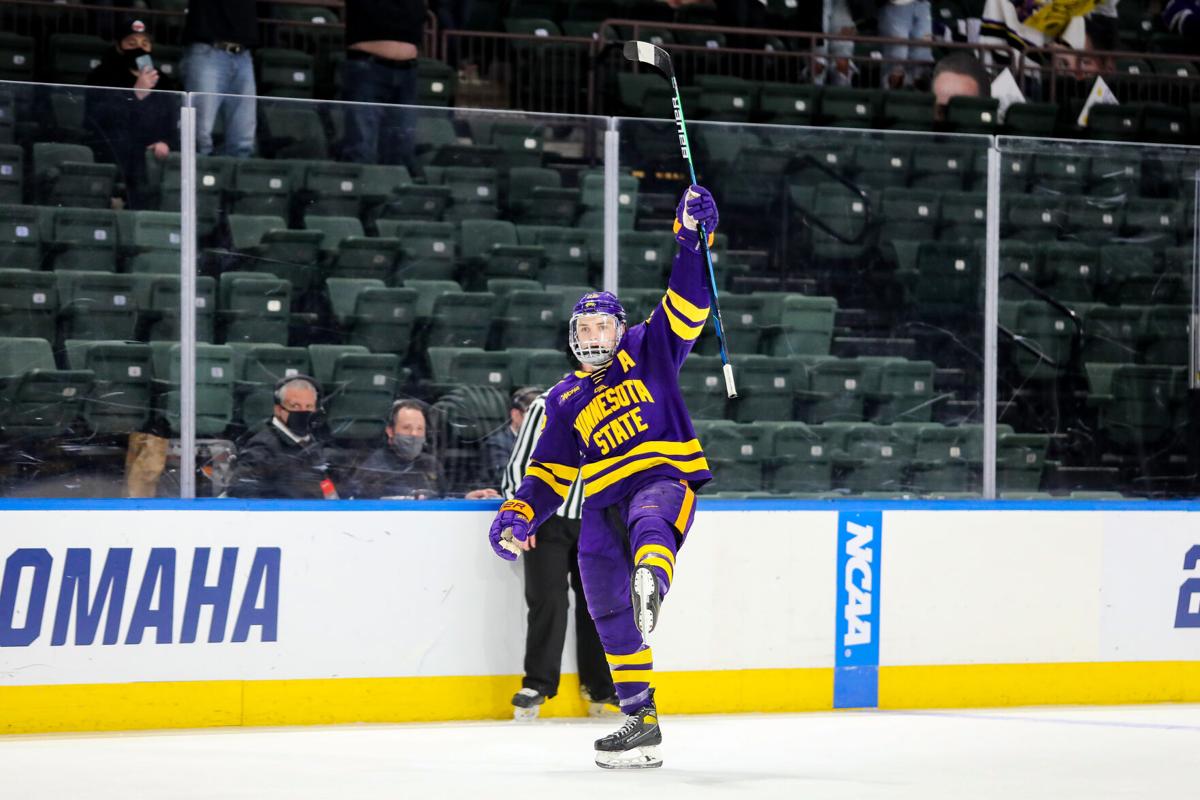 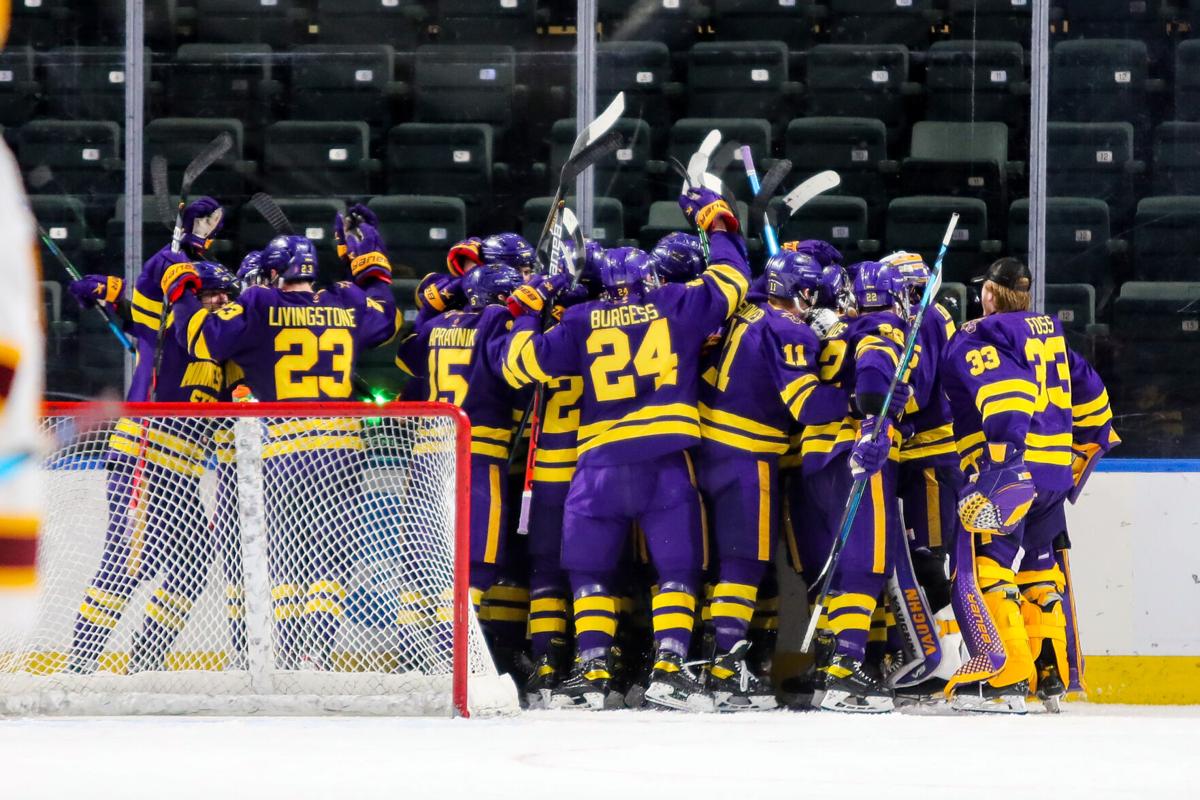 The Minnesota State men’s hockey team and their coaches celebrate after winning the NCAA West Regional on Sunday. 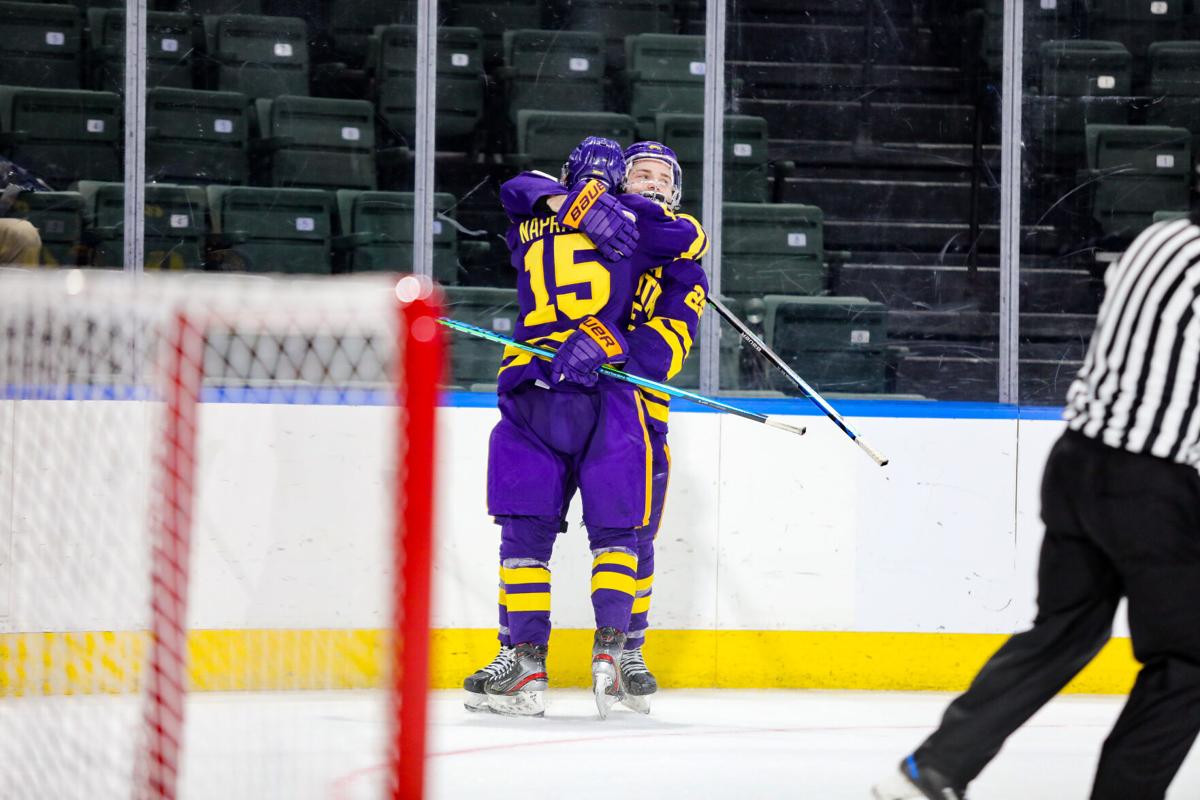 The Minnesota State men’s hockey team and their coaches celebrate after winning the NCAA West Regional on Sunday.

Despite generally being lower-minute fourth-line players, Ryan Sandelin and Sam Morton were simply outplaying guys ahead of them in the pecking order.

So he moved them up and rode them, a decision that paid off when Sandelin scored the game-winner in overtime against the Bobcats.

When the line chart came out ahead of Sunday’s West Region final, it was no surprise to see each of them on the second line. Hastings was betting on the hot hands, and it paid off.

Morton and Sandelin each scored first-period goals, which ended up being enough as the Mavericks defeated Minnesota 4-0 in the West Region final of the NCAA Tournament on Sunday at the Budweiser Events Center.

“I was fortunate to work with Dean Blais ... he went on a trip, and I had the club for a day. He said ‘don’t do a lot of that coaching. Stay out of the way, let the players play’ and that group, they played,” Hastings said. “There was a synergy from the time they got together on Saturday night.

“To give them an opportunity to go out and play like they played tonight, I thought they’d earned that.”

A day after getting the first NCAA Tournament win in the Division I era Saturday, the Mavericks are now headed to their first Frozen Four in program history.

After a week of talk revolving around MSU’s 0-6 record in the national tournament culminated with the team being announced as the “Minnesota State Vikings” Saturday, it’s safe to say MSU has officially arrived on the national stage.

“I had read the stuff ... I think as a team we came in with a chip on our shoulder that it was us against the world,” goaltender Dryden McKay said. “We were just here to prove people wrong, and I think we did that.”

For the first time in a long time, the Mavericks got off to a good start.

Morton got MSU on the board at 10:23 with a wraparound that beat Gophers’ goalie Jack LaFontaine.

“I don’t know if it was just getting that off our back ... but the guys came out and they played free,” Hastings said. “We wanted to try and play from ahead because we’d gotten tired of playing from behind.”

In the final two periods, the Mavericks delivered a brilliant defensive performance, completely stifling the high-powered Gophers in the neutral zone.

Shots on goal favored the Mavericks 27-22. McKay made several key saves en route to his 10th shutout of the season and 24th of his career.

The Mavericks blocked 23 shots in front of McKay.

“I thought we played selfless tonight. When we possess the puck, I think that’s when we’re best,” Hastings said. “That’s the best defense.”

Added McKay: “I have to tip my cap to the team tonight. I’ve never seen an effort like that as far as blocking shots ... they made my life pretty easy back there.”

Nathan Smith ripped home a one-timer at 9:50 of the third to put MSU firmly in control, and Dallas Gerads iced the victory with an empty-netter at 17:41.

“Our motto since we started the WCHA playoffs was all about earning respect,” McKay said. “We knew the only way to do that was to come to the big stage and get the job done.