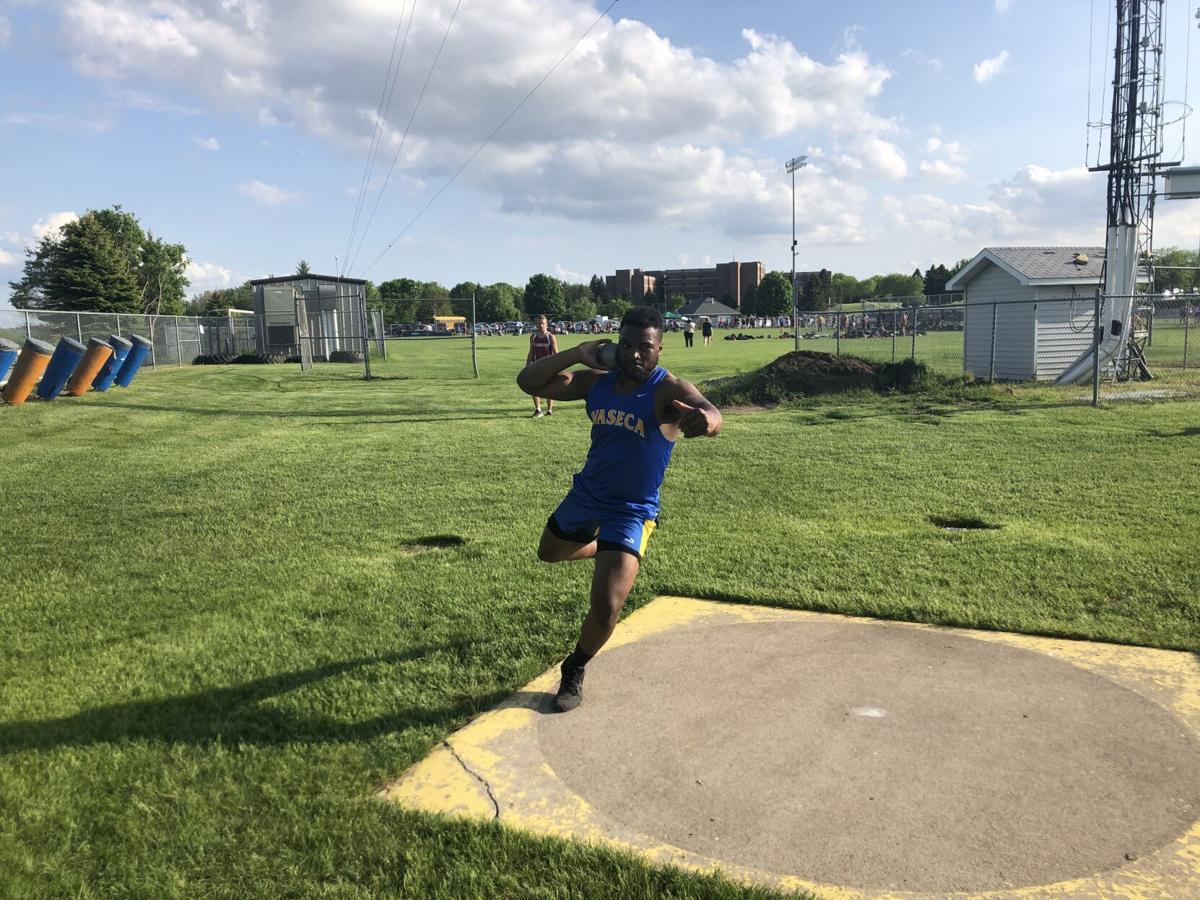 Waseca thrower Marcus Hansen finished in the top five in both the shot put and discuss at the 2019 Class AA state meet. 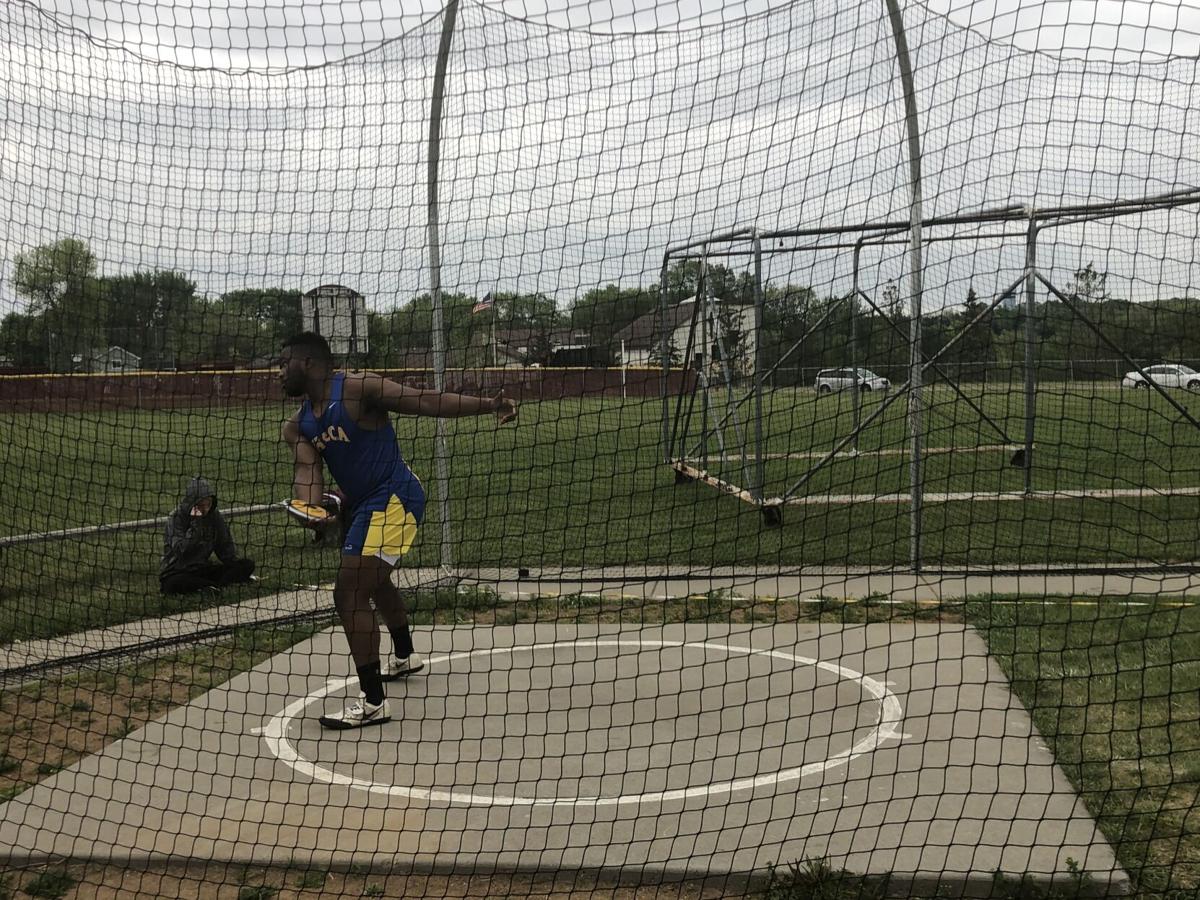 Waseca’s Marcus Hansen has the top mark in the state in the shot put at 60-4.

Waseca thrower Marcus Hansen finished in the top five in both the shot put and discuss at the 2019 Class AA state meet.

Waseca’s Marcus Hansen has the top mark in the state in the shot put at 60-4.

When Waseca senior thrower Marcus Hansen gets off the bus at a southern Minnesota track meet, he’s instantly the star of the show.

There’s “look, it’s Marcus” whispers when he walks by. People he doesn’t know routinely stop him just for an introduction or to exchange pleasantries.

Hansen is polite and talks to the people who approach him, but he tries to ignore the stares and whispers and doesn’t get what all the fuss is about.

“I’ve definitely noticed it,” Hansen said with a laugh. “You can only do so much ... I just really try to stay focused on competing and being a competitor.”

When the throwing starts, Hansen’s teammates, competitors and fans can’t take their eyes off him, even though the result is basically a forgone conclusion.

Hansen is going to win both the shot put and discus — by a lot.

“He’s kind of like a one-man celebrity. He’s like Prince,” Waseca throwing coach Brad Wendland said with a laugh. “You get kids, fans and parents coming over to see him, which you don’t normally get in a track meet. That part’s kind of fun. ... I tell him, ‘Every meet we go to, we want people to leave talking about you.’”

Hansen wasn’t born into throwing. In fact, track and field wasn’t even his first option when it came to a spring sport. He tried both spring soccer and tennis first.

However, by the time he reached seventh grade, he was all in on football as his main sport, and had developed a relationship with Wendland, who is the head football coach at Waseca.

Wendland had heard of Hansen’s talent, but as he got to know him better, he saw the fantastic work ethic and attitude up close.

That’s when it hit him — Hansen could be a track star.

“Maybe my greatest move as a coach would’ve been to talk to him as an incoming seventh grader and say, ‘I think you should try track,’” Wendland said.

Added Hansen: “He thought I’d be really good at it, so I was like ‘what the heck, might as well give it a shot.’ I guess here I am.”

As a sophomore in 2019, Hansen finished third at the Class AA state meet in the discus with a throw of 164-feet-03, and was fifth in the shot put at 53-07.50. There are only two classes in track and field, so Hansen earned those finishes against competition from the state’s biggest schools.

After missing his junior season due to the pandemic, Hansen has picked up right where he left off.

So far this season, he currently ranks first in the state in the shot put with a top mark and personal record of 60-4, well ahead of Tracy-Milroy-Balaton’s Tony Nelson, who ranks second at 54-10. In the discus, Hansen ranks fourth in the state at 165-1. His personal record in that event is 169-1, which came his sophomore year.

“I’m never going to get to coach another kid like this,” Wendland said. “He’s a perfect combination of a ton of talent, great desire to work and the best part about Marcus is above his shoulders. ...

“He thinks, he studies, he prepares and he’s ultra-competitive ... he’s at his best when things are on the line.”

As Hansen’s senior season comes to a close, he’s trying to take it all in. After the year away, he’s loved spending time with his teammates and he’s happy with the way he’s thrown at most of the regular-season meets.

Now, there’s only one thing left to do before he retires from throwing and heads to Bemidji State to play football in the fall: bring home a state title or two.