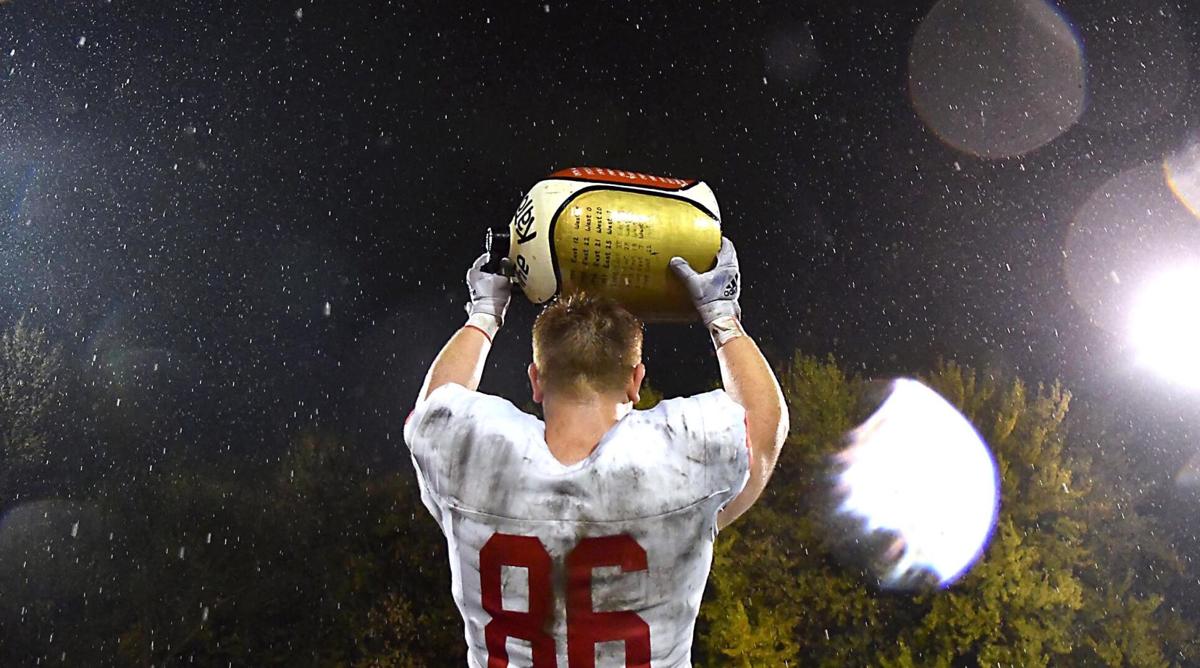 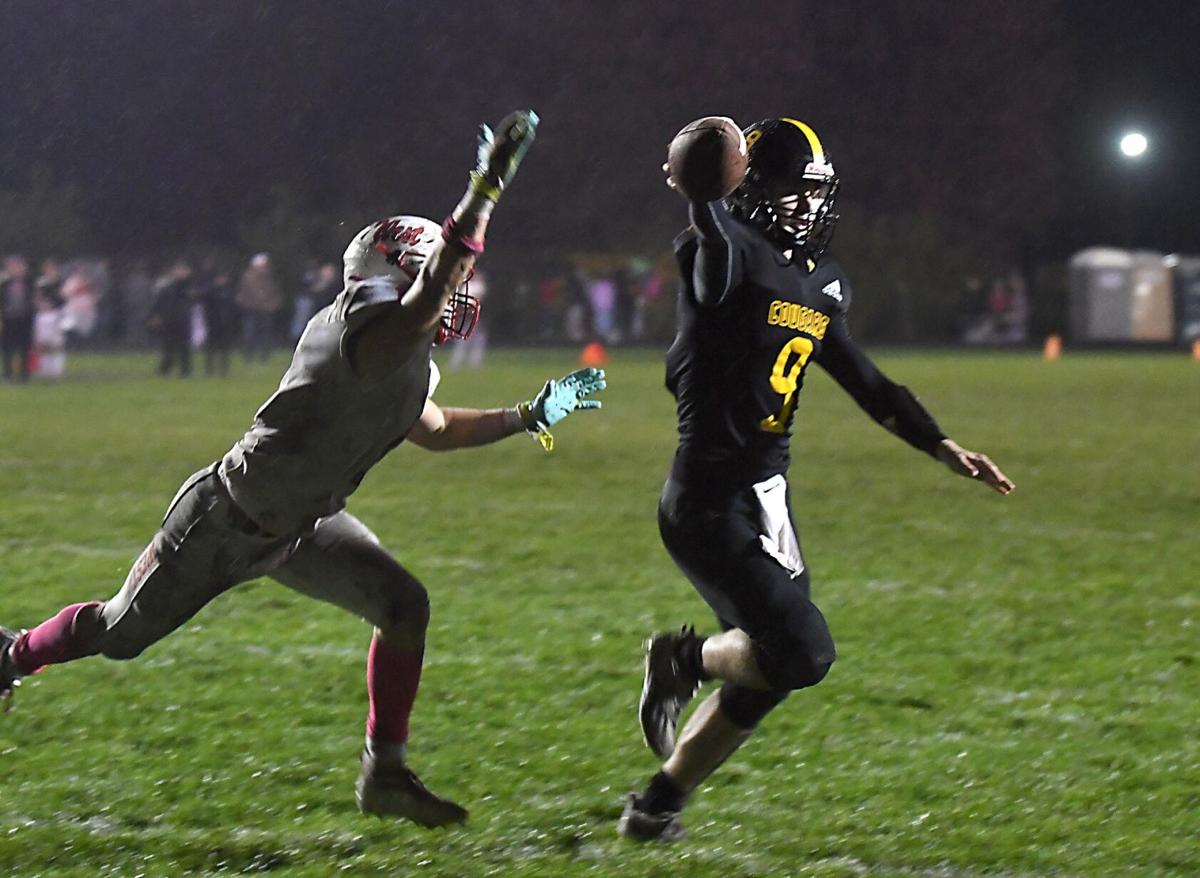 Mankato East’s quarterback Jacob Eggert holds the ball into the end zone as he scores during the fourth quarter of Wednesday’s game. 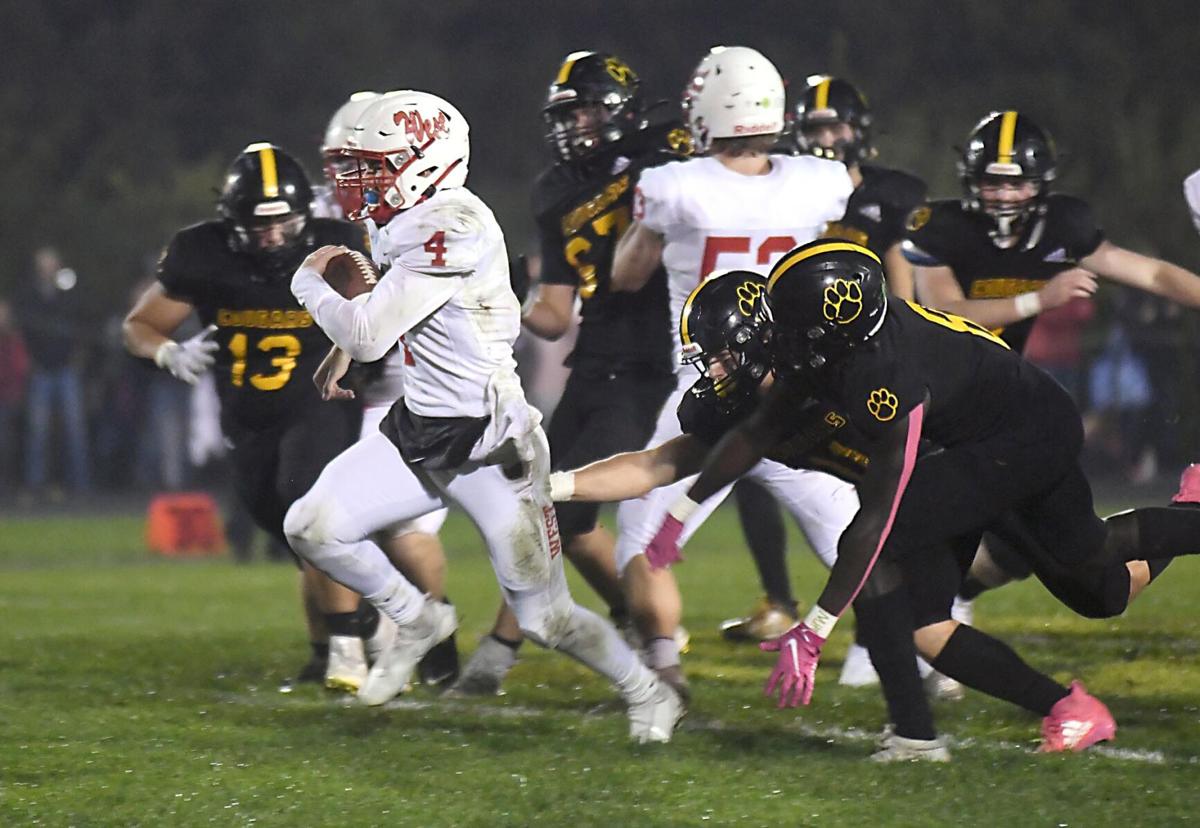 Mankato West quarterback Alexander Dittbenner runs for a touchdown during the first half against Mankato East on Wednesday at Wolverton Field. 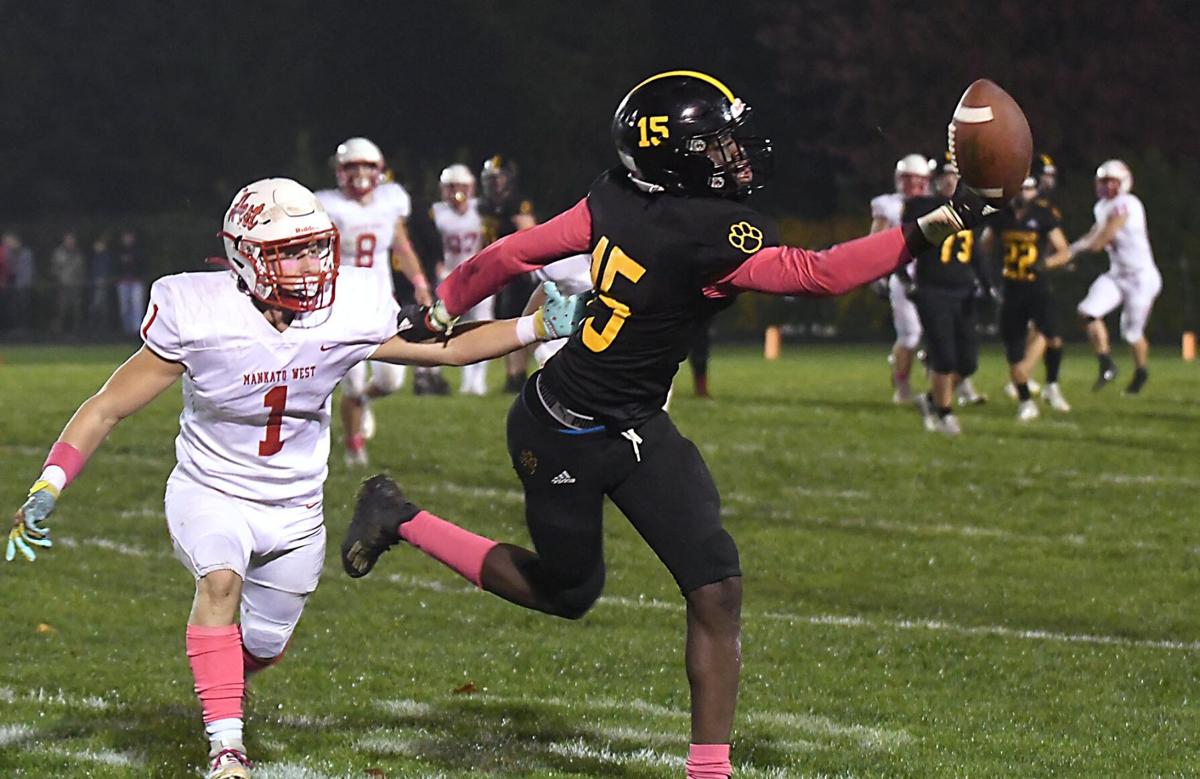 Mankato East’s Puolrah Gong reaches out but can’t make the catch during the first half Wednesday at Wolverton Field.

Mankato East’s quarterback Jacob Eggert holds the ball into the end zone as he scores during the fourth quarter of Wednesday’s game.

There was 3:52 to play, and Mankato East had just scored to make it 21-20, nearly erasing a two-score deficit in the fourth quarter.

The Cougars decided to try for the two-point conversion to take the lead against No. 1-ranked Mankato West. However, a pass sailed high, and the Scarlets maintained the lead.

“There were a lot of nerves there,” West linebacker Ryan Haley said. “But I had trust in my teammates. I knew we were going to pull it out.”

The Scarlets didn’t score for nearly all of the second half, holding on to defeat the Cougars 23-20 in the annual Jug game Wednesday at Wolverton Field. The game was moved from Blakeslee Stadium because of heavy rain Wednesday.

West, which now leads the series 27-22, has won 16 straight against East, but few have been as competitive and intense as Wednesday.

“This was a great experience,” Haley said. “It was an eye-opener for us. They played great, but we never gave up. We had to show some toughness.”

West’s first drive was pure power. Lining up in the Wildcat formation, with a direct snap to the running back, the Scarlets moved 70 yards in 12 plays. Eight of the plays were from the Wildcat, including the final 2 yards by Haley. Drew Smook’s PAT made it 7-0 after the possession, which took 6:30.

“We thought they were going to come out in some type of stop-the-run scheme,” West coach J.J. Helget said. “But we thought we could run the ball, especially early. With the rain, and the wet ball, we knew it would be hard to pass.”

The Scarlets, who didn’t attempt a pass in the first half, used a turnover to score the next touchdown, with quarterback Zander Dittbenner scoring on a 50-yard run to make it 14-0 early in the second quarter.

East’s next possession started with a first-and-31 at the 20, but 10 plays later, Jacob Eggert lofted a 9-yard pass to Puolrah Gong, who went high in the corner of the end zone to make the catch.

But on the next kickoff, Britz went 90 yards to restore the two-score lead at 21-6. It was the Scarlets’ last touchdown.

After no scoring in the third quarter, East recovered a fumble at its own 22. Three plays, plus a penalty, later, Eggert threw a 29-yard jump ball that Meer Othow grabbed in the end zone. A two-point pass made it 21-14 with 8:21 to go.

On West’s next possession, Kaden Oachs made an interception near midfield and returned it to the 3, and Eggert then scored on a sweep to get within one. With all the momentum, East went for the lead, but Eggert’s pass to the back of the end zone was too high.

“We were going to go for the win,” East coach Eric Davis said. “In high school, with a wet ball and the snap ... it always makes me nervous. We had a good play that we thought would work, but they defended it well.”

East had one last chance, taking over at the 1 with 54 seconds to play. But a low snap turned into intentional grounding for a safety, and West had a 23-20 lead.

“We know our guys are going to battle,” Davis said. “They’ve had to overcome a lot of stuff this year. The kids have a lot of faith in each other, and the coaches have faith in the kids. That was only enhanced tonight.

West had 253 yards, with 213 yards rushing. Britz had 77 yards on 12 carries but missed most of the second half with injury. Damian Riewe had 79 yards on 13 carries as his backup.

West (8-0) and East (6-2) will open the Section 2AAAAA playoffs next week. West will be seeded first or second and get a first-round bye in the playoffs, while East will play Tuesday against an opponent and site to be determined Thursday morning.

“I think this really opened our eyes,” Helget said. “We’re at the point of the season where you win or you’re done. We’ve got some tough games ahead of us in our section.”