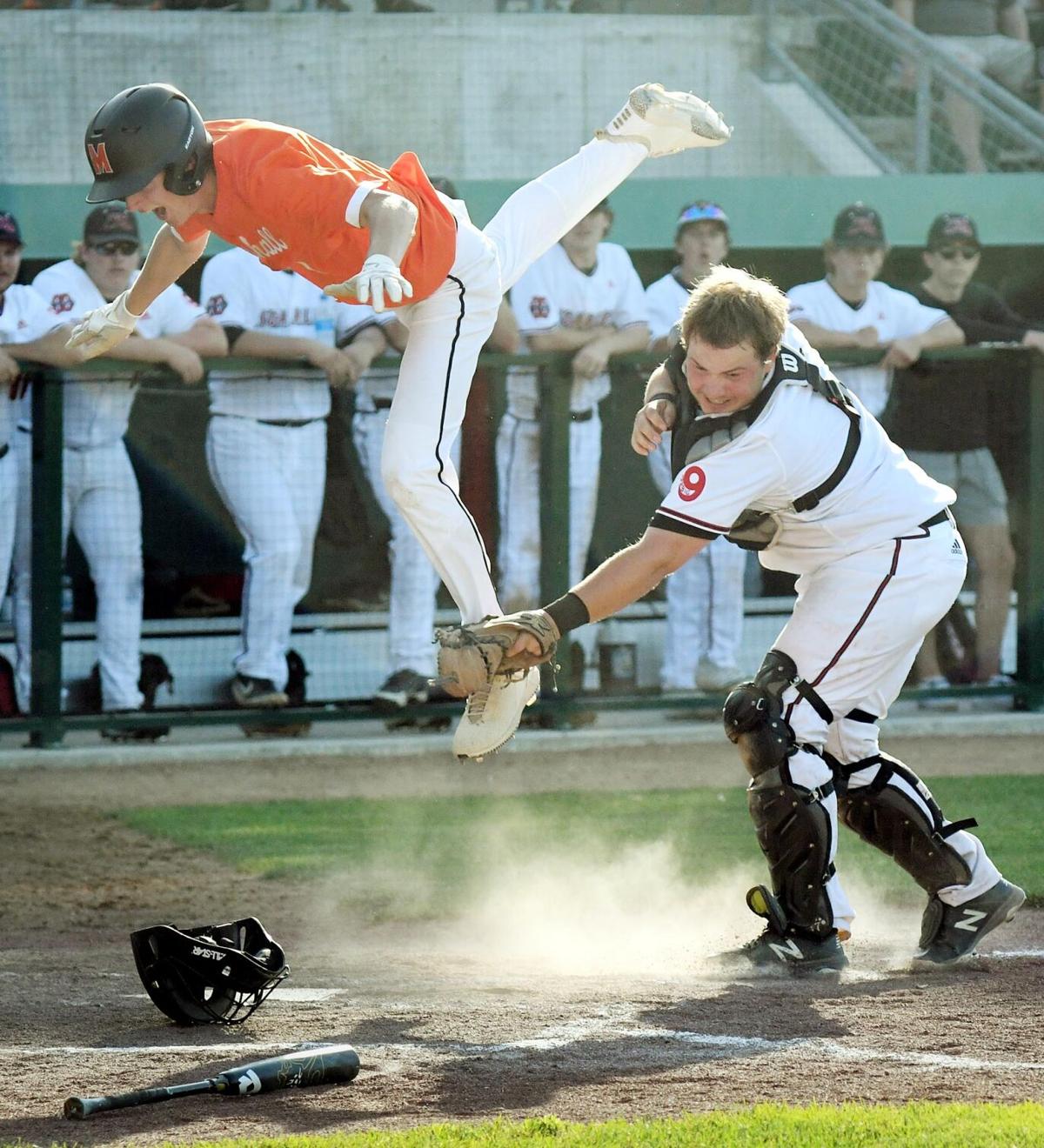 Marshall’s Jaden Pearcy is tagged out at home by Mankato West catcher Jacob Maes in the fifth inning of a Section 2AAA semifinal at Johnson Park in New Ulm on Tuesday. 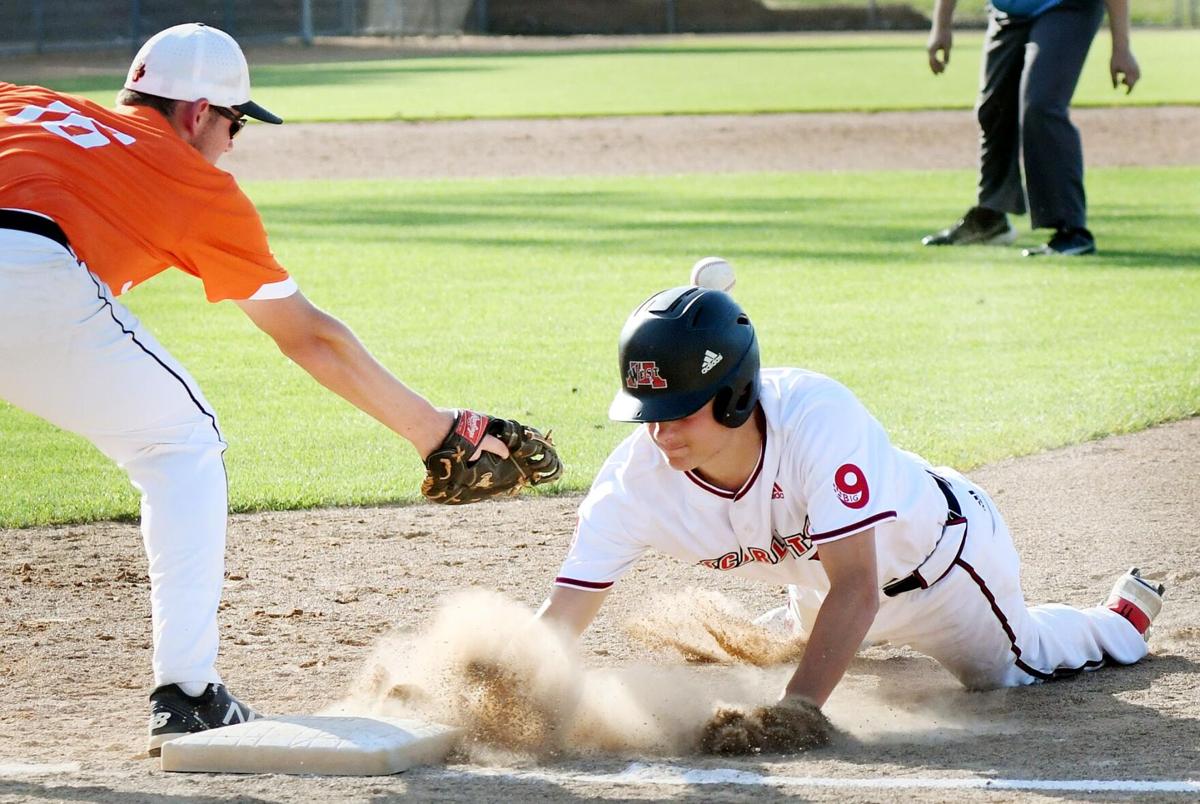 Mankato West’s Buck Wiebers dives safely back to first base as he is struck by an errant pickoff throw in the fourth inning of Tuesday’s Section 2AAA playoff game against Marshall. The Tigers won 6-2 at Johnson Park in New Ulm. 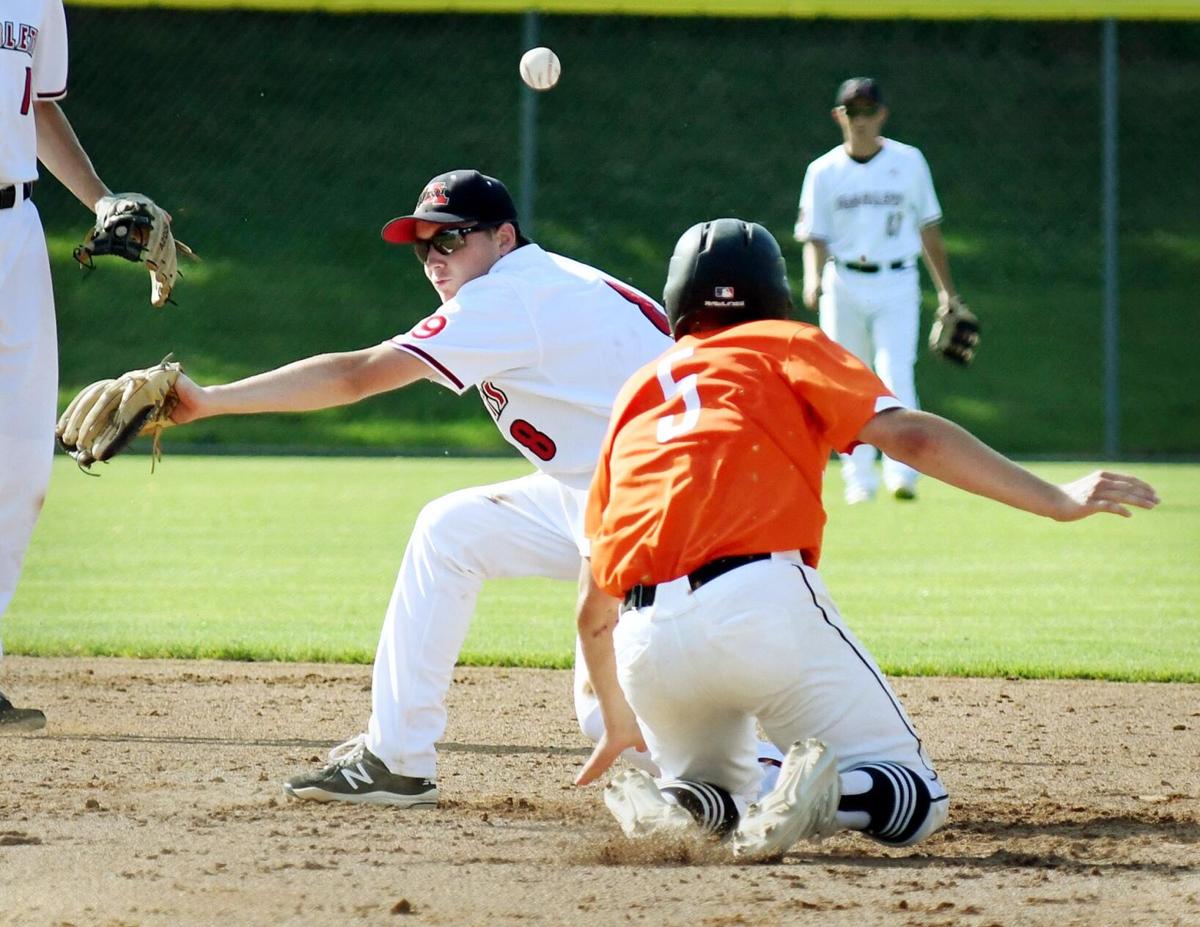 Marshall’s Jaden Pearcy is tagged out at home by Mankato West catcher Jacob Maes in the fifth inning of a Section 2AAA semifinal at Johnson Park in New Ulm on Tuesday.

Mankato West’s Buck Wiebers dives safely back to first base as he is struck by an errant pickoff throw in the fourth inning of Tuesday’s Section 2AAA playoff game against Marshall. The Tigers won 6-2 at Johnson Park in New Ulm.

The Mankato West junior has made just three or four starts, a couple of relief appearances. He's too valuable at shortstop to take the mound too often.

But late Tuesday night, with the Scarlets' season at stake, he pitched a gem, leading his team to a 4-3 victory over Hutchinson in an elimination game of the Section 2AAA baseball tournament at Johnson Park.

"I realized we were struggling with our bats, so I needed to put the team on my back and get us to Friday," Magers said. "The heat helps to keep you loose, and I never felt fatigued. I just had to trust my stuff, make them swing the bats and trust my defense."

The day began with West hoping to advance to Friday’s championship game with a chance to qualify for the state tournament. But instead, the Scarlets were at the ballpark for more than six hours, trying to extend the season.

"We couldn't get anything going in that first game," West coach Sam Stier said. "We never got the first guy on, that takes away a lot of the stuff we like to do."

West lost 6-2 to Marshall in the winners’ bracket final, then downed Hutchinson 4-3 in an elimination game later Tuesday.

Against Hutchinson, the Scarlets had a single in the second and third innings but couldn’t push anything across.

In the fourth, Jacob Maes led off with a hard single to left, and Nic Cook walked. An infield error loaded the bases with one out.

A high chopper to the mound was thrown home for the force, but the ball popped out of the catcher’s glove for a run-scoring error as courtesy runner Buck Wiebers crossed the plate.

However, the Scarlets left the bases loaded, despite taking the first lead of the two games.

Louis Magers started and didn’t allow a hit through four innings, but Hutchinson got two two-out hits to take a 3-1 lead in the top of the fifth.

West got those runs back in the next at-bat. Hayden Mellen’s two-out single — West’s first RBI of the day — scored a run, and an infield error tied the game at 3. Ryan Haley was hit by a pitch with the bases loaded to bring in the go-ahead run.

"Hayden really came through for us," Stier said. "After that, we started to string some things together. Everyone who came into the game did their part. I'm proud of the way we battled."

""They were making a lot of noise in the dugout," Magers said. "It was nice to kind of shove it in their face."

West’s first baserunner came in the third when Wyant Fowlds walked, and Haley followed with a double. Fowlds then scored on a wild pitch.

In the fourth, West scored a run on two walks and two wild pitches to make it 3-2.

Marshall got two runs back in the top of the fifth, with Riley Bersaw coming on to get the final two outs and limit the damage.

West finished with just two hits, while Marshall had at least one hit in every inning, stranding 12 runners.

At the same time, Hutchinson scored twice in the seventh and eventually defeated Mankato East 6-3 in nine innings in an elimination game.

Jacob Schreiber had a double and triple, and Matthew Werk also had two hits for East. The Cougars finish with a 13-10 record.

West (21-2) will get a rematch with Marshall at 5 p.m. Friday at Johnson Park. Wes would have to win twice to claim the section championship and a berth in next week's state tournament.

"Sometimes, in section baseball, you have to grind it out," Stier said. "Now we have to come back and win two."