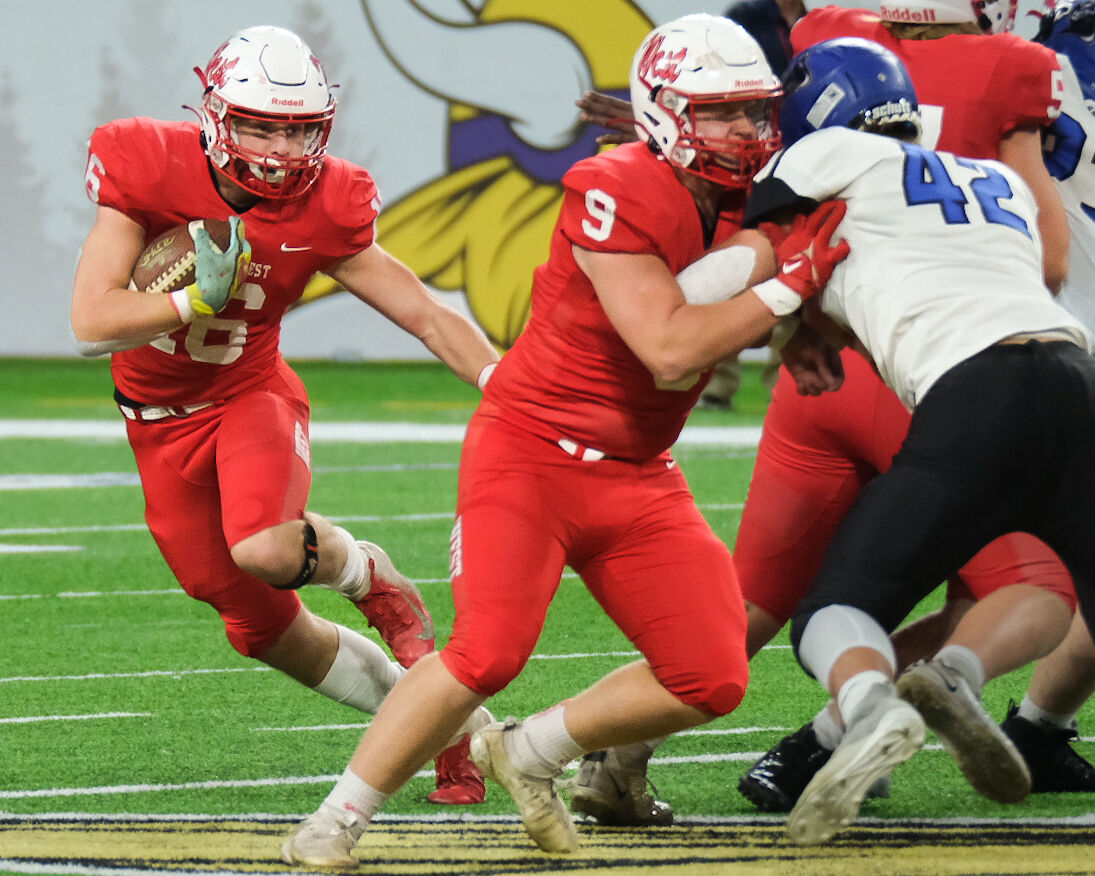 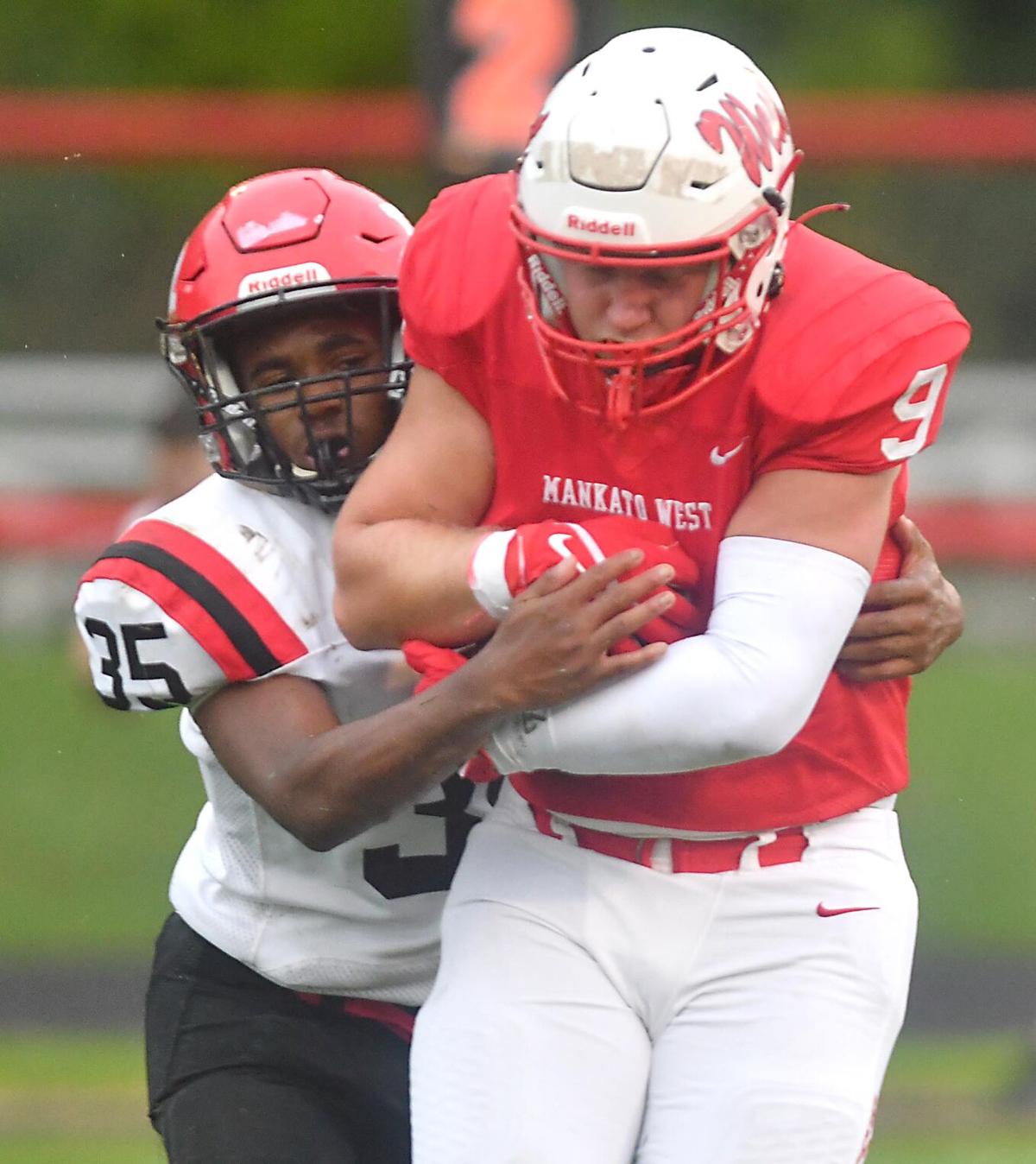 Mankato West linebacker Brady Haugum holds on to an interception earlier this season. He has two interceptions this season and has scored a defensive touchdown.

Mankato West linebacker Brady Haugum holds on to an interception earlier this season. He has two interceptions this season and has scored a defensive touchdown.

After a successful freshman season, Brady Haugum was a rising star in the football and basketball programs, destined for a highlight-filled two-sport career at Mankato West.

But things didn’t quite work that way. Injuries and the sudden death of his father derailed Haugum’s progress but never extinguished his passion for sports.

“I had a great freshman year, even eighth-grade year,” Haugum said earlier this week. “I was excited. The upperclassmen had taught me what to do, and I got a lot of experience. But everything didn’t go according to the plan.”

Haugum will be a starting tight end and outside linebacker for the No. 1-ranked Scarlets (12-0) when they take on Mahtomedi (10-2) in the championship game of the Class AAAAA football playoffs at U.S. Bank Stadium.

Haugum, a senior linebacker and tight end, has faced more than his share of adversity to get to this moment.

He was a running back but missed his sophomore football season and most of the basketball seasons because of a bone bruise in his lower leg. He suffered a sprained ankle during summer basketball that ended up being a cartilage issue, which required arthroscopic surgery.

But he never missed a football practice, and he volunteered to film practices to stay engaged with his coach, teammates and friends.

“He was always there, helping us out,” West coach J.J. Helget said. “I think that’s what makes this whole group special. They’re so close.”

Before his junior season, Haugum finally was healthy and was going to play summer basketball again. But his dad, Brad, died unexpectedly in April, throwing another challenge at Haugum.

“My dad and I connected through sports,” Haugum said. “He made me love football and love basketball. Not having him here is tough, especially with what’s happening now.”

Haugum was a starter on West’s basketball team that reached the state tournament, and now he’s trying to help West win its fifth state championship.

Haugum’s main duty on offense is blocking, but he has made six receptions, three of which have gone for touchdowns, including the key second-half score against St. Thomas Academy in the state semifinals.

On that fourth-and-2 play, Haugum faked into the line as a blocker before releasing, catching a short pass, breaking a few tackles and swerving past others to complete the 18-yard score on a snowy field.

“We’ve been repping that play all season, and we finally pulled it out,” Haugum said. “It was a great call by (Helget), and it felt really good to score.”

Helget said Haugum is perfect for the tight end role, big enough to block defensive ends and athletic enough to run routes. He’s usually paired on the same side of the formation with top receiver Mekhi Collins so if defenses want to double-team Collins on the outside, there is room for Haugum to work the middle of the field.

Haugum also plays outside linebacker on a defense that’s yielded just 119.8 yards of offense and 4.5 points per game, which is a program record.

Despite missing three games with a shoulder injury, he’s made 27 tackles and two interceptions, and he’s scored a defensive touchdown.

This week, he’ll be tasked with helping to block the edge of the Mahtomedi defense and be more involved in the passing game. Defensively, he’ll need to be stout on the edge of the run game, perhaps taking on fullbacks and pulling guards.

“I just want to do whatever I can to help the team,” Haugum said.

On Saturday, the Scarlets were dealing some injuries in the second half when they faced a fourth-down deep in their territory. Helget sent out Haugum for his first punt since eighth grade.

Helget had seen Haugum punting the ball for fun at practice and was intrigued, but this was the state semifinals and Haugum would be punting from the end zone in the fourth quarter.

“I just wanted to get it off before anyone could get to me,” he said.

Punting, like switching position and filing practices when he was injured, was just another example of attitude of Haugum wanting to whatever he can to help his team. Having dealt with so many setbacks in his career, he’s changed his attitude and outlook about sports.

“With everything that’s happened, it’s been tough, but it puts things in perspective,” Haugum said. “Playing in the state basketball tournament last year was fun, and this is awesome. It’s great to be out there, playing with my friends and working toward a common goal.”